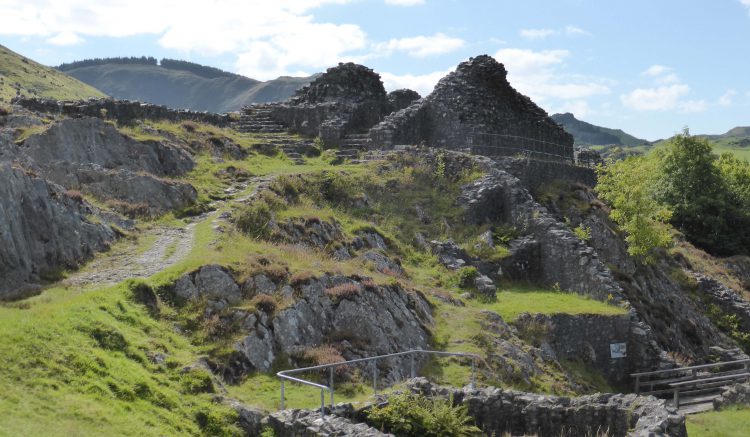 After another restless night with itchy legs we agree that we should avoid going on too long a walk today. First thing in the morning I will be visiting the GP surgery. We drive to Dolgellau and pick up the A487 heading south for a few miles before forking right to pick up the B4405. We are now on the other side of Cadair Idris and the road takes us close to the edge of the beautiful Tal-y-llyn Lake at Abergynolwyn we turn right at a crossroads in the centre of the village.

As we leave the village the road becomes more narrow, single track with a few tight passing places, at a junction we keep straight on and just over a mile later we take a right turn to follow the signs towards the Mary Jones Monument. Whilst we plan to visit the monument we have another attraction to go to first.

About a mile further along we arrive at a small car park beside the road. We are at Castell y Bere and after passing through a kissing gate we climb the path to visit the remains of the castle. As we climb we can see why you might build a castle on this rocky outcrop. 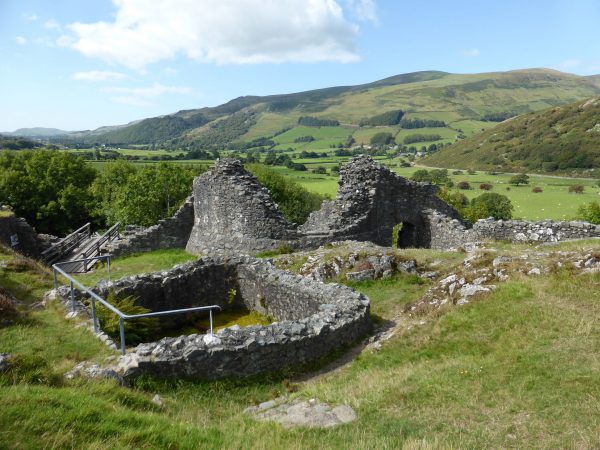 Llwelyn the Great constructed the castle in the 1220’s, it appears that there was a dual purpose to its construction. Firstly he wanted to ensure control over the local people and secondly he was reclaiming authority from his son who he had left to oversee the area. The rocky outcrop presented the ideal location for a castle, especially as the wide fertile valley of the Afon Dysynni was ideal pasture for cattle. Around these parts there is not much flat land so this was much valued.

The information board at the castle tells us that after Llwelyn the Great died in 1240 it remained in his family until 1283 when Edward I took the castle and surrounding area. The English abandoned the site after an uprising by the locals in 1294 and the castle then slowly fell into disrepair.

We wander around and marvel at how, in it’s heyday, the castle would have dominated the surrounding area. This is another of those places that you visit that has major historical significance, yet there is hardly anyone here! I am sure they must be at the next tourist attraction just along the road.

After a good look around we descend from the castle and pass through the kissing gate again. We decide that as the weather is set fair we should stretch our legs (even with the spots) and walk the mile or two to the Mary Jones Memorial. So we head off along the lane and enjoy the warmth of the sun. 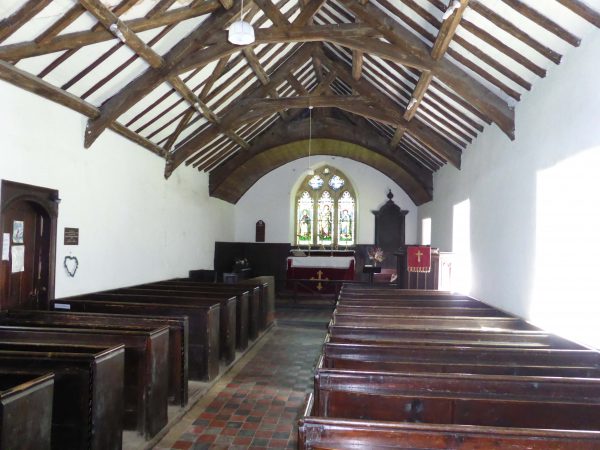 As we enter the village we walk alongside the side of the graveyard of St Michael’s Church, in Llanfihangel. We enter the church to find it deserted, but immediately see from the visitors’ book that this spot is well visited. The church is very basic, the font immediately catches my eye. An information sheet says that it is believed that this was taken from Castell y Bere. It certainly looks very old. But it is not the font that brings people here, or perhaps it is. This is where Mary Jones was baptised. 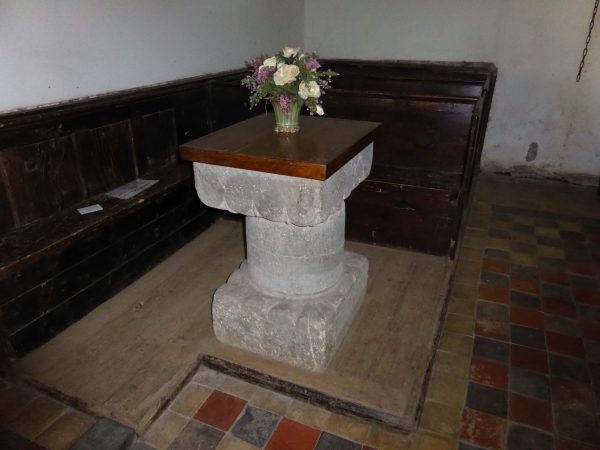 I have to be honest and say that until we came here I did not have a clue who Mary Jones was. I know that I will have a few friends who might, but I am sure she did not form part of the history or RE lessons when I was at school. If she did then I have no recollection. At this point I should add that I do have a pretty good memory, given enough encouragement I can tell you all about the strengths and weaknesses of every Saints player from the mid 1960’s to the current day. Mind you Lynnie has always said that if she sends me to shop for more than three items she needs to write a list!

Anyway, Mary Jones is pretty important in religious circles. Mary was born to a poor family in the village in 1784. The poverty of the family meant that they were unable to afford a bible and that the nearest copy was two miles way. So in 1800, after much saving, Mary then aged 15 set off to buy her own bible. Not a walk to your local Waterstones for Mary, she had to go all the way to Bala to make the purchase from Rev. Charles some 25 miles away. Even then she could not be sure that there would be a Welsh version for her to buy.

It is said the poverty of the family meant that Mary had no shoes so she did the walk bare foot. There are two versions of what happened when she arrived, one that all the copies were sold out, but because she was so distraught the Rev Charles gave her a copy. The other is that she had to wait two days until more stock arrived. Either way Mary’s quest for a bible is said to have made such an impression on Rev Charles that he then proposed to the Council of the Religious Tract Society that a new organisation be established to supply the people of Wales with Bibles. Consequently in 1804 the British and Foreign Bible Society was established. This organisation is now known as the Bible Society.

After leaving the church we continue our walk down the lane and after crossing the Afon Cadair we immediately come to the Mary Jones memorial, which is erected on the spot where Mary’s family home stood. 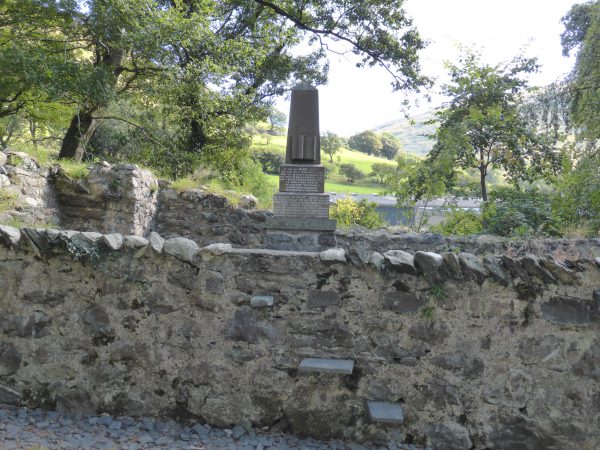 As we walk back to the car the sun is really hot. The boys request a trip to the beach, so off we head to Tywyn. My map shows loads of beach and when we get there it is ideal for the boys. Hardly a soul about and heading away from the town we are on a dog friendly beach with loads of nice wet sand for them to chase tennis balls on. 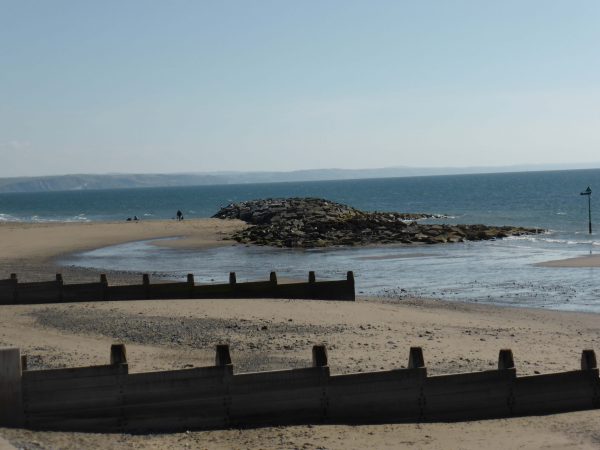 Back in the car and Lynnie coverts ice cream. I am not bothered, unless slathering it on my legs would ease the itching! On our way into Tywyn Lynnie spotted the Honey Ice Cream shop. This is no ordinary ice cream shop, there are coach loads arriving and queues out of the door. It reminds me of the first time I visited Harry Ramsden’s in Guisley in the 1960’s. Lynnie gets her purchase, but immediately compares it to Hockings Ice Cream (North Devon) and clearly it is not of the same standard. Nonetheless Lynnie consumes it all, I assume that she is checking that they did not put the best bit at the bottom of the cone.

Our journey back takes us on the scenic coast road from Tywyn towards Fairbourne. At times it is a bit too scenic for me as it appears to be carved into the side of a cliff. Lynnie tries to reassure me by saying that the railway line was below us. After arriving back at the Unicorn I pop down to Dolgellau to load up some blogs and check the time that the surgery opens in the morning.