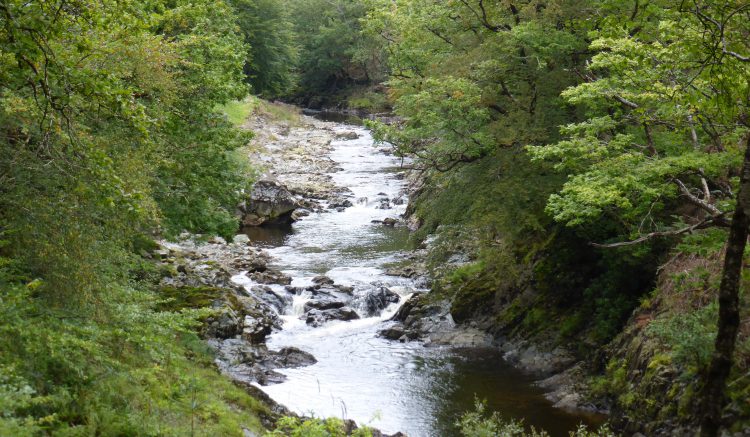 Today there are showers forecast and it all feels a bit muggy. It is another hazy day and the long distance visibility is not great so there is little point climbing up high for views. Instead we drive to Ganllwyd and park in the National Trust car park alongside the A470.

On leaving the car park we turn right to walk along the pavement through the village alongside the busy road. There are some nice cottages with pretty gardens but the constant backdrop of traffic noise must make it difficult to relax here. We leave the village via a minor tarmac road on the right with a ‘No Through Road’ sign.

Down a slight hill and over the bridge crossing the Afon Eden and then it is a steady climb up the road leading us through the trees marking the start of Coed-y-Brenin, which apparently means King’s Trees in Welsh. It soon opens out a bit and we can see a mountain bike trail laid out in a clearing on our left. This is the first indication of the popularity of this forest with mountain bikers.

The site is owned by the Forestry Commission and covers about 9,000 acres situated around the valleys of the rivers Mawddach, Eden, Gain and Wen. In 1990 this area was identified as being ideal for mountain bike trails and over the years the number of routes has increased. There are now nine routes all clearly marked and varying in length from 1.9 miles (20-40 minute ride) to 24 miles (4.5 hours ride). The routes are colour coded; Green = novice, Blue = intermediate, Red = difficult, Black = severe. The routes occasionally use the wide forest tracks, but for much of the time they are kept separate from walkers, so whilst we need to keep an ear and eye out for approaching bikes mostly we see them in the distance, or lying in a heap after completing a particularly grueling section. 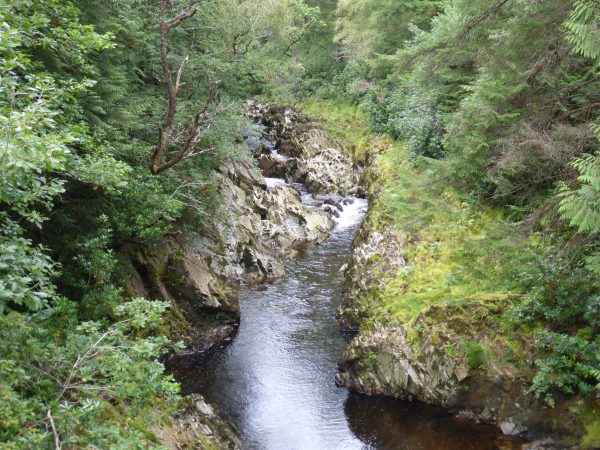 Soon we follow a track down towards the river, which we cross on a long footbridge high above the Afon Mawddach before turning left along a forest track. Almost immediately we come to an information board. Apparently on the 3rd July 2001 this area suffered huge storms. There was widespread flooding that affected Dolgellau, Bala and Trawsfynydd when four inches of rain fell in three hours. As river levels rose trees, bridges and buildings were washed away. In the gorge below us the river rose 33 feet above its normal level.

Our route takes us along the edge of the gorge, there are some sheer drops of forty to fifty feet so I am a bit wary, but the track is wide and I have no need to venture too close to the edge. As we walk we get views of Rhaeadr Mawddach falls. 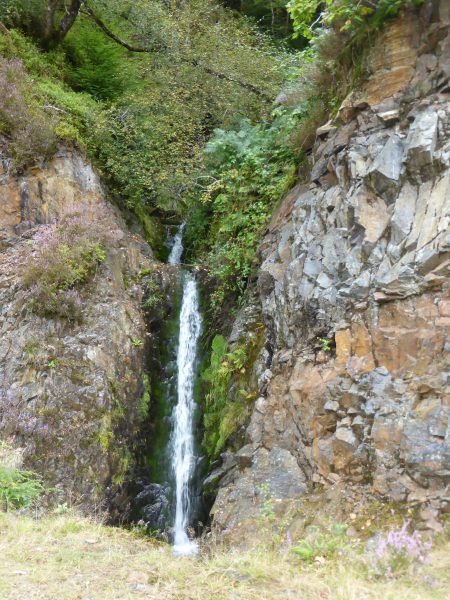 This is a tranquil spot and belies its past industrial heritage. Gold was discovered in the surrounding hills in 1844 and soon after it became popular with prospectors. In their search for wealth they dug hundreds of horizontal mine openings into the hills. In the hills above us here at Gwynfynydd one of the largest discoveries was made in 1863. This became Britain’s most productive gold mine and in 1888 produced 9,000 ounces of gold. The mine operated until 1916 and was reopened in the 1930’s before closing again in 1999. Gold from this area has been traditionally used for making rings for the Royal family. 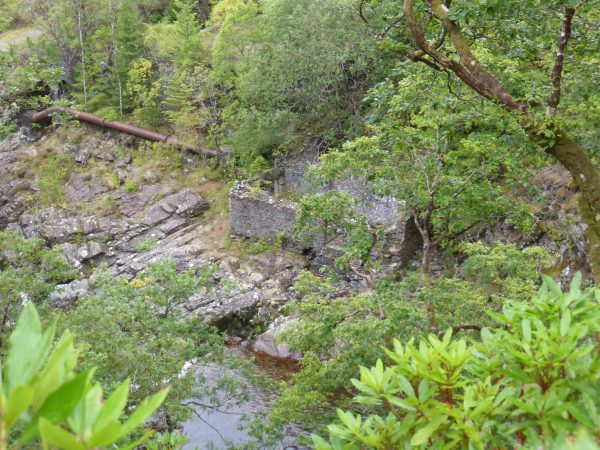 Apparently there is a gold mine nearby that is open to the public, but here below us along the edge of the river the derelict buildings of the gold mill are all that remain to indicate the past. We carry on to reach a bridge across the Afon Gain and here we get sight of the impressive Pistyll Cain, it is said that following heavy rain this is the most spectacular waterfall in Snowdonia. 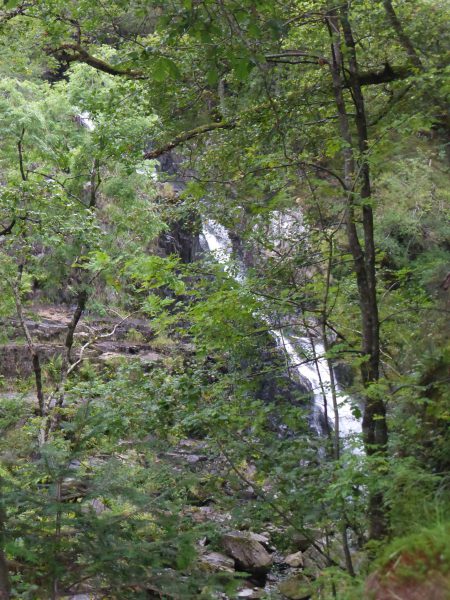 We cross the bridge to follow the route round to our left with the gorge of the Afon Mawddach on the opposite side to that we had walked up. We pass the holiday cottages at Ferndale, a very remote place to stay, and on reaching a car park take a track on the right that climbs up into the trees.

This is a long gradual climb and we keep going for a couple of miles until we reach a T-junction of tracks, here we go left and have a more level walk for about half a mile. At the next T-junction we go left again and follow this route all the way down to the bridge where we first crossed the Afon Eden. Turning right over the bridge we walk back alongside the A470 to the car.

Time to head back to the Unicorn and put more cream on my itchy legs. The rash I have had for a couple of weeks has become increasingly irritating. I think it is time to visit another GP on Monday to get it checked out.

In the evening we wander down to the George III at Penmaenpool for a pint and a bite to eat. On entering the bar I bump into our friendly farmer from yesterday’s walk. I thank him again for his directions and he asks if we enjoyed the view, he is pleased to hear that I graded it as ‘cracking’!