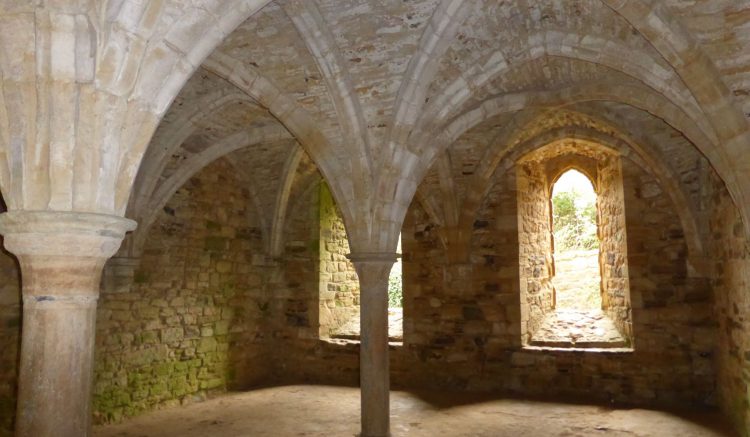 Today we are heading to Battle Abbey just a short walk from our site.  We walk into Battle following the route we took a few days ago when we arrived at 1 Uckham Lane Gardens CL.

We take the footpath between the site and the market garden, then through the fence to follow the path through a plantation of trees.  The footpath follows the hedge line, but as it is almost impassable we use the well-worn path, the accepted route, around the rise with its seat.

Passing through an opening in the hedge Battle comes into view. It is straightforward into town passing allotments before arriving in a car park.  From the car park entrance we turn left along Mount Street to the High Street where we turn left towards the Abbey.

The Abbey is the remains of a Benedictine Abbey, dedicated to St Martins of Tours, built in 1070 on the site of the Battle of Hastings.

Of course most of us have a sketchy knowledge of the history of the Battle of Hastings, but just in a case here is a quick resume.  On the 5th January 1066 King Edward the Confessor died heirless.  There were a number of folk who thought they should succeed to the throne.  These included Harold Godwinson, his brother Tostig the Earl of Northumbria, the Norwegian King Harald Hardrada and William Duke of Normandy.

On 6th January, Harold was crowned King and his problems began.  Tostig and King Harald of Norway joined forces and on the 20th September 1066 defeated an English army at the Battle of Fulford.  King Harold was a bit miffed at this and on the 25th September 1066 defeated Tostig and Harald Hardrada at the Battle of Stamford Bridge, both claimants to the throne were killed in the battle.

Ever since Harold’s coronation his old friend William, Duke of Normandy had been pretty irritated.  Harold and William had fought together against William’s enemy Conan II, Duke of Brittany.  In reward William presented Harold with a knighthood and Harold pledged allegiance to William who believed he was the rightful successor to Edward the Confessor.  So when the Crown was popped on Harold’s head William thought he had been stitched up!

On the 27th September 1066 William set sail for England landing on the Sussex coast the following day, his 7,000 strong army set up camp near Hastings.  News soon reached Harold and he marched his troops over 240 miles from Stamford Bridge, just east of York, setting up camp with 10,000 men north of Hastings.

The numbers may suggest that Harold had the greater force, however, the make up of the troops were different, the majority of Harold’s men were battle weary infantrymen with very few archers.  In contrast only half of William’s troops were infantrymen, the other half were archers and cavalrymen.

Battle commenced on the 14th October at 9am and went on until dusk.  Initially Harold looked to have the upper hand, but William adopted the tactic of appearing to flee before turning on his pursuers.  As everybody knows Harold copped one in the eye from William’s archers and the battle was soon won by the Normans.  William was crowned King on Christmas Day 1066. 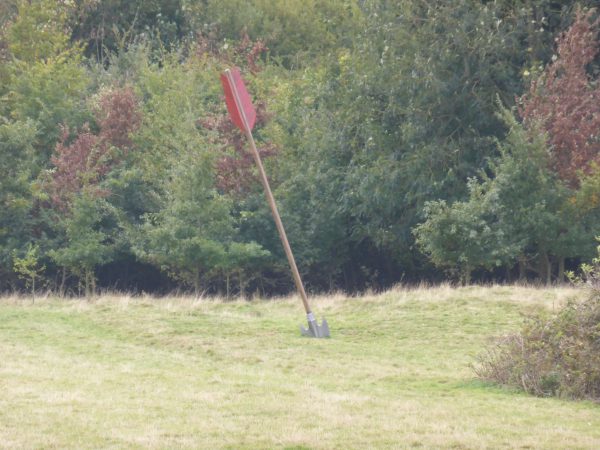 It is the week before the 950th anniversary of the battle and preparations are well under way for an anniversary reenactment so we are unable to access the battlefield.  However, walking around the abbey we get views over the battle site. 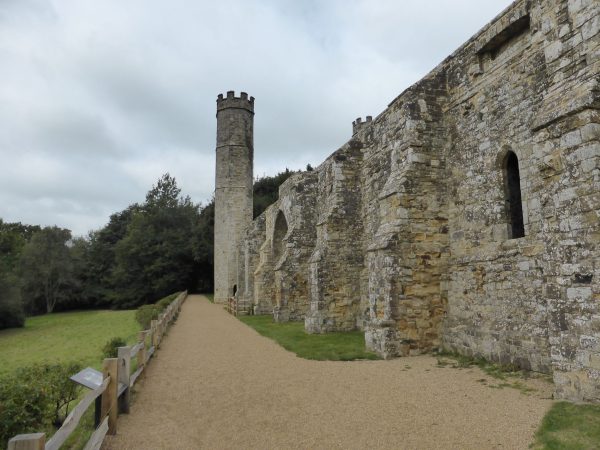 Pope Alexander II was unhappy about the number of people killed during William’s conquest of England and as a consequence William the Conqueror built the Abbey on the site of the battle with the alter stone supposedly placed at the spot where King Harold died.  This is now marked by a stone.

William died in 1087 before the Abbey’s completion, so his son William II (known as Rufus) took on the task of finishing the project, which was finally completed in 1094.  Of course this monastery was unable to escape the mass destruction resulting from Henry VIII’s Dissolution of the Monasteries in 1538. 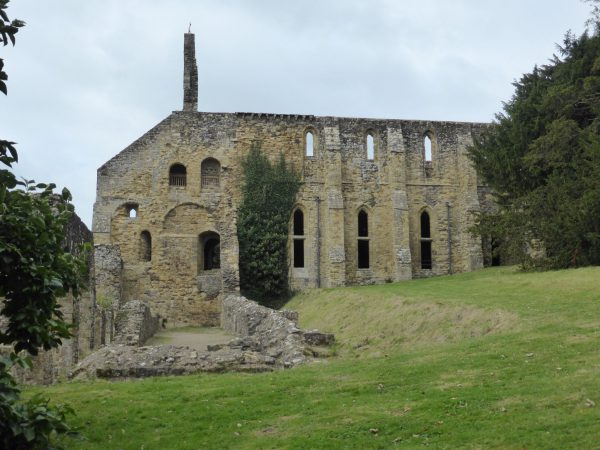 There followed years of private ownership during which time a major house was built, the site was sold to the State in 1976 and is now run by English Heritage.  They do a fine job, the place is well maintained with loads of information boards and the freedom to explore without feeling you are part of a procession. 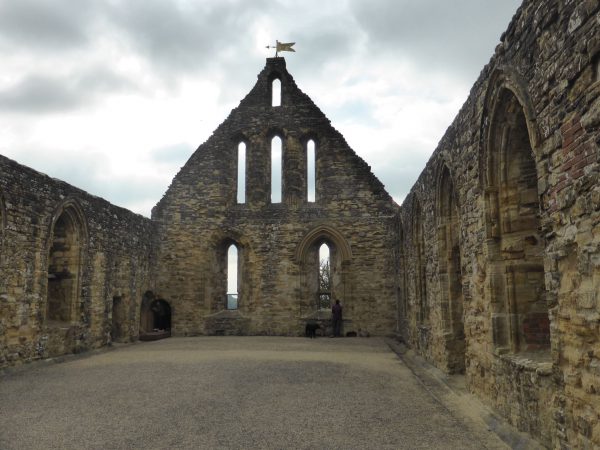 In 1903 the people of Normandy erected a monument to King Harold that stands close to where he died. 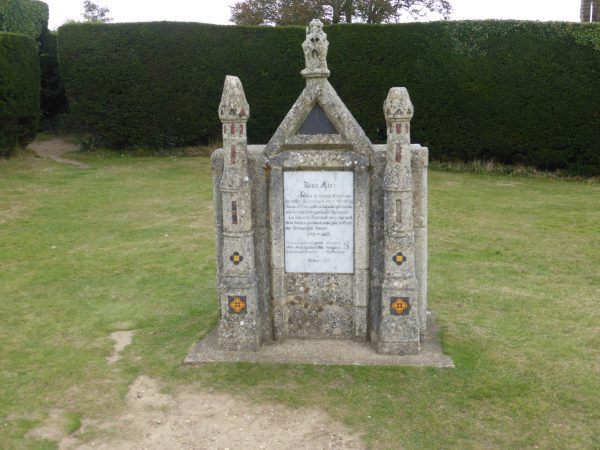 We wander around the grounds where dogs are permitted.  Despite being a major tourist attraction, and today there are several groups of visiting school children, the abbey ruins are vast and it feels uncrowded and peaceful.

The main house became a girl’s boarding school in 1922 and during World War II housed Canadian troops.  After the war it once again became a girl’s school becoming co-educational in 1989. 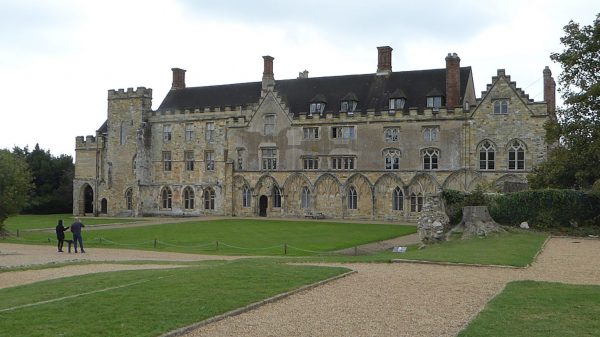 We wander back to the caravan but only have a brief stop as we are soon in the car heading for Hastings.  We are off for a night out with “The Wilks’”!

Our special friends Maurice, Jane and Carlos moved to Bexhill and St Leonards-on-sea earlier in the year and Maurice’s other daughter Julie and her fellow Steve are visiting from Spain. I have been friends with Jane and Jules all my life and it is always special when we are together.

Before meeting up with them we wander along Hastings’ promenade.  This is not our normal walking environment, but I am keen to visit the pier having heard a lot about it.

Hastings Pier was opened on August Bank Holiday Monday in 1872.  It was very popular in Victorian times and continued to prosper until a fire at the seaward end in 1917.  This resulted in the construction of a new pavilion in 1922 and further refurbishments in the 1930’s.  This period was the height of popularity for piers.  According to the pier’s website on the first week of August 1931 56,000 people went through the turnstiles, the town had a population of 66,000! 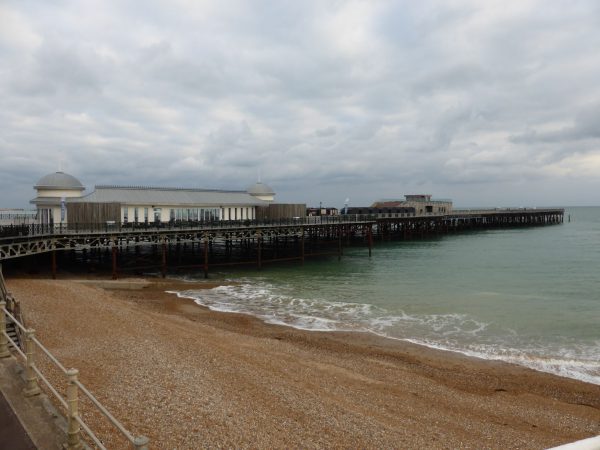 During World War II the pier was closed and sections of decking were removed to prevent it being used as a landing stage during an invasion.  There was a different sort of invasion in the 60’s and 70’s when it became a major pop venue with numerous well know acts appearing.  The pier’s website lists The Rolling Stones, The Who, The Kinks, Jimi Hendrix, Pink Floyd, The Clash and The Sex Pistols amongst others. 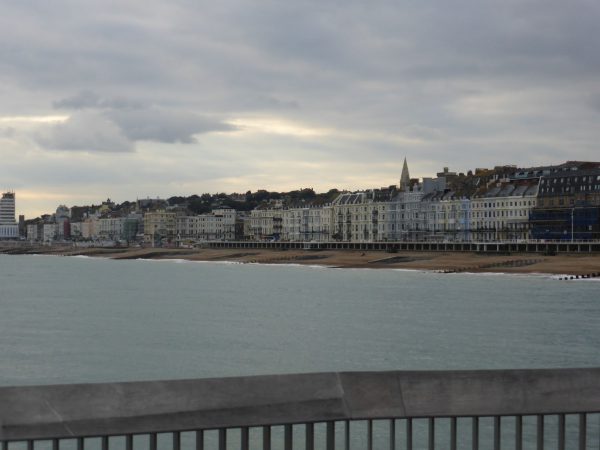 By the 1980’s the pier was in decline and this continued until 2008 when it was closed.  This stirred the community into action, a major fire in 2010 was a significant setback.  But the community was not deterred.  Hastings Borough Council made a compulsory purchase order on the remains of the pier and in August 2013 Hastings Pier Charity bought it for a £1, which sounds generous but the catch was that it needed £14.2m to restore it. 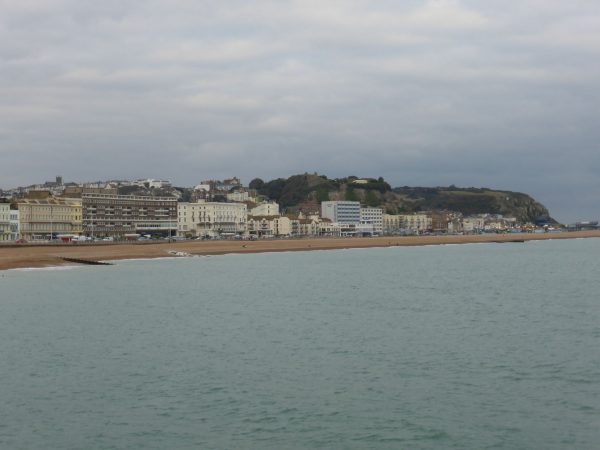 The Heritage Lottery Fund awarded a grant of £11.4m, the rest was raised through smaller grants and fundraising, including a community share offer which raised £600,000.  This is a great example of what a community can do when it pulls together.  Its future is safeguarded and this stunning structure has been restored.

After the pier we carry on along the promenade in an easterly direction soon reaching a memorial to the people of the borough who fell during the South African War (1899 to 1902), more commonly known as the second Boar War.  During our travels we have seen many war memorials but I cannot recall seeing one to the Boar War. 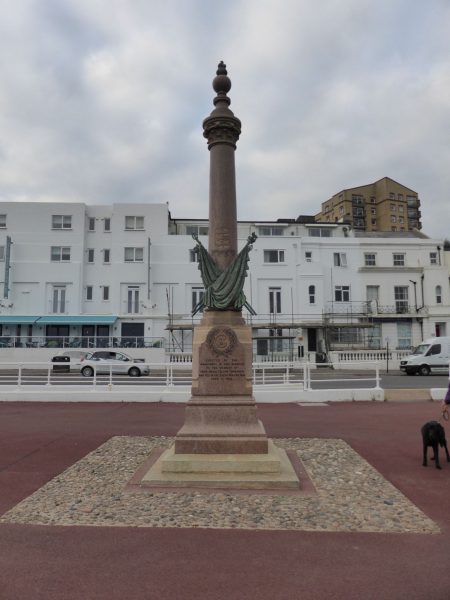 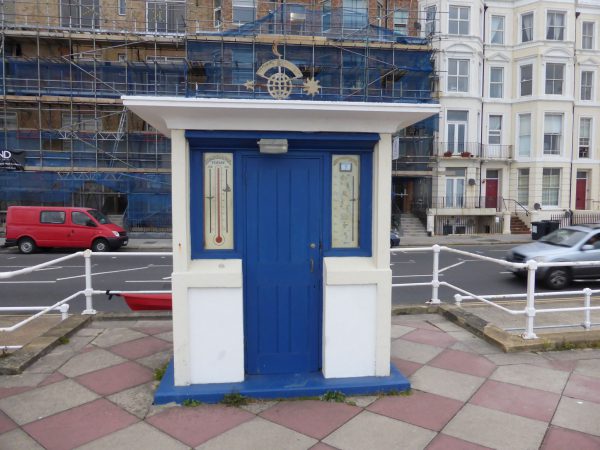 It is time to meet up with our friends for a night of entertainment in St Leonards-on-Sea.  We are going to see Sarah Jane Morris and Antonio Forcione, unknown musicians to us (and probably to many of you), but once seen never forgotten.  Their music tackles some of the biggest issues facing our society, so is not for the faint hearted.  Individually they are highly talented musicians and combined they are evocative and thought provoking.

They are playing in the magnificent Kino-Teatr an interesting and intimate venue.  First built in 1913 as a cinema known as the Kinema Palace, it survived in 1943 when many surrounding buildings were destroyed.  In 1952 it was given a facelift and renamed The Curzon cinema.  It has recently been refurbished and along with the small auditorium has a café and art gallery.  If you get the chance it is well worth a visit just see the splendid building.

We have a cracking night with such good friends.  Happy days!