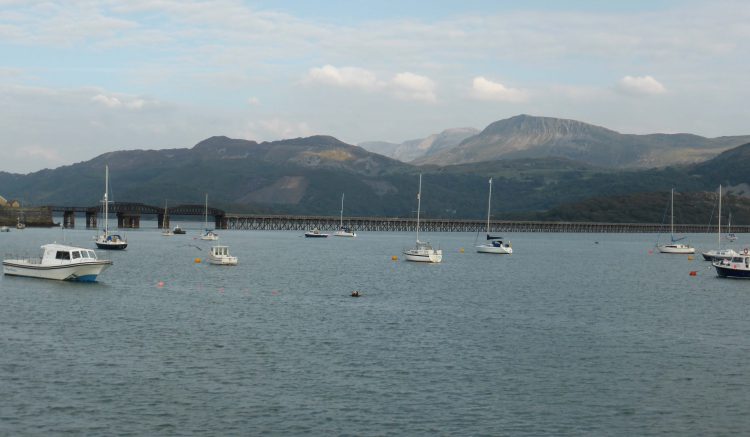 As I mentioned yesterday one of the factors that led to us staying at Abergwynant was watching Julia Bradbury walk the Mawddach Trail. This is a footpath going from Dolgellau to Barmouth, a distance of 9.5 miles using the old track bed of a disused railway line. As Julia walked the route I was struck by how stunning the scenery was, I thought at the time it might be a trick of the camera, but in real life it is even better.

We walk from the site alongside the River Gwynant and on joining the trail overlooking the Afon Mawddach we are immediately struck by how different it looks today with the tide in. Yesterday evening there was an expanse of mud banks, but now there is water right across the estuary. 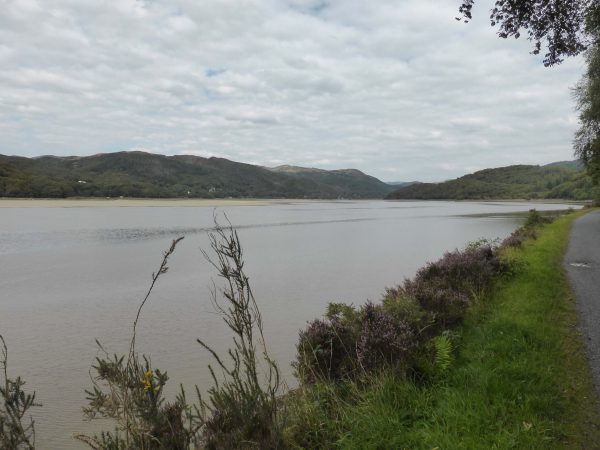 We turn left and walk towards Barmouth. It is easy going. We meet the occasional cyclist and walker coming in the opposite direction, everyone is smiling, all clearly enjoying being in such a wonderful place.

The Snowdonia National Park Authority now maintains the trail. The railway line that preceded it was opened in 1865 and ran between Barmouth and Ruabon. This was a popular line with visitors, it is easy to see why. The line was also used to carry slate. This was another of those lines that fell victim to the Beeching cuts in the 1960s.

The other morning I was talking to Mrs Jones’ son, a chap of similar age to me, he told me how his father was one of the farmers that joined forces to ensure that the old railway line was put to good use and not just subsumed into the farms that bordered it. Apparently this was before the Park Authority became involved, we should be thankful for the foresight of these men.

As we walk we pass the house where, I have been told, the local JP and Sheriff lived with barracks for his men. Apparently the Sheriff was kept particularly busy dealing with the local brigands or as they were known the Red Bandits of Mawddwy. These bandits operated in a lawless area around the Welsh Marches and Meirionnydd and made travelling in the area treacherous.

Further along we pass Arthog and can see the attractive Mawddach Crescent, apparently these houses were built in 1902 by a Cardiff entrepreneur, Solomon Andrews, as part of his plans to develop a holiday resort. His plans did not advance any further and these properties now make a fine terrace. During World War II the Royal Marines commandeered the crescent and also built huts on nearby Fegla Fawr, which stands on the other side of the trail on the banks of the estuary. 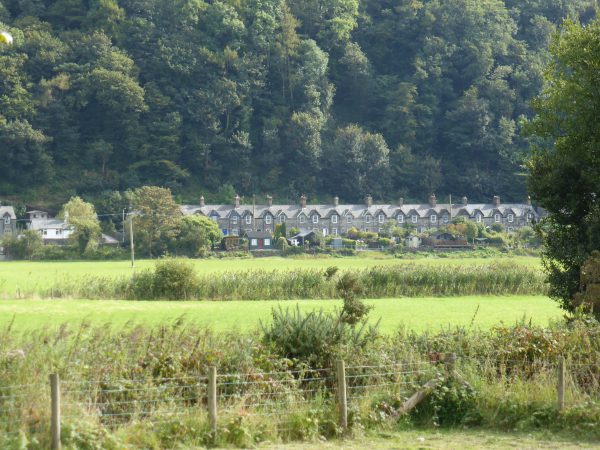 Following the trail we come to Morfa Mawddach station and walk alongside the railway track that is still in use and crosses the estuary to Barmouth. During our walk toward Barmouth we have been treated to fine views of the bridge and I have been looking forward to walking across it. Followers of the blog will know that I am not fond of bridges, but this one looks like an extended pier and even with the tide in the water does not look that deep. 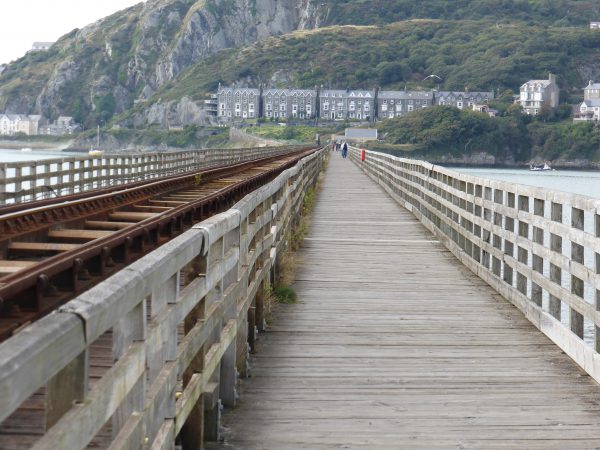 The bridge carries the single-track railway and alongside there is a footbridge, for most of the 900 yards it is a wooden structure. The bridge was opened in 1867 to carry passengers and freight. Apparently in 1980 concerns were raised about the safety of the structure and freight trains were banned from using it (I did not know this until after I had crossed it!).

Until 2013 there was a toll for using the bridge, but when the couple that operated the toll booth retired it was decided to stop collecting the toll. So we walk through the tollgate without needing to search for change.

It is early closing day in Barmouth and the main street is quiet. It is a pleasant seaside resort with a history of shipbuilding. William Wordsworth was a visitor here in the 19th century and described the town “With a fine sea view in front, the mountains behind, the glorious estuary running eight miles inland, and Cadair Idris within compass of a day’s walk, Barmouth can always hold its own against any rival.” Who am I to disagree with such a man of words?

We take a stroll along the promenade. An elderly female photographer stops us to ask if she can take pictures of Dexter and Crosby. They pose in the hope of a reward, but leave having only received words of praise.

I try to tempt Lynnie to an ice cream, but she declines on the basis that it is not local ice cream. It is a warm afternoon and I think we deserve a break, so after passing an interesting sculpture we stop off at the Last Inn, which claims to be one of Wales’ most famous pubs. Refreshed we head off back across the bridge and then retrace our route along the trail. 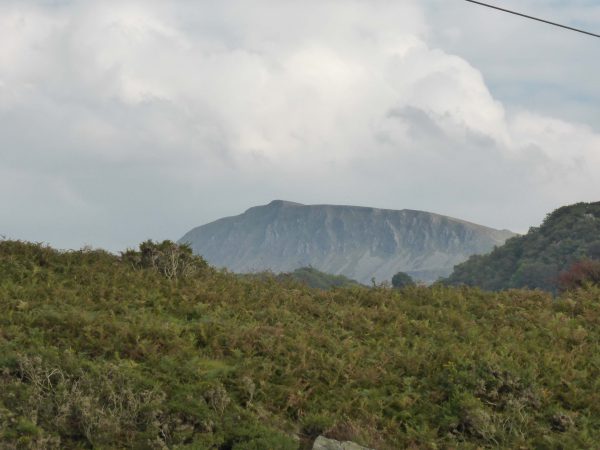 Our walk today has been overshadowed by Cadair Idris, the top has been clear and it has looked stunning. We have been told that it is unusual for it to be so clear and if we are going to walk it we should do so in the next few days. After a days walk on the flat I think that the climb will probably be good for us tomorrow.