Being away in the caravan in November means there is limited daylight for walking so no time to faff about.  We have decided to explore a part of the South Downs Way and head for our starting point; the attractive village of Amberley just off of the B2139.

We leave the village, passing the school and heading south to cross the B2139 Turnpike Road and join Mill Lane on the opposite side.  Following the tarmac lane we head gradually uphill leaving the lane at a South Downs Way marker on our left, this path climbs further.  Going through a gate it starts to rain, this is all too familiar, when we walked sections of the South Downs Way in 2014 it seemed to be always shrouded in mist and drizzle!

The route is clearly marked and easy to follow, the wet chalky path is slightly sticky and climbs gradually.  The view to our left back over Amberley and the flood plain of the River Arun would be stunning on a clear day. 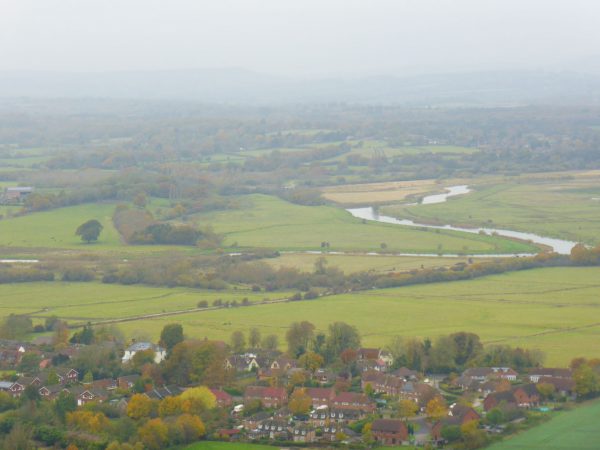 We remain on the main path, ignoring ways to our left and right and then pass the trig point on Rackham Hill. 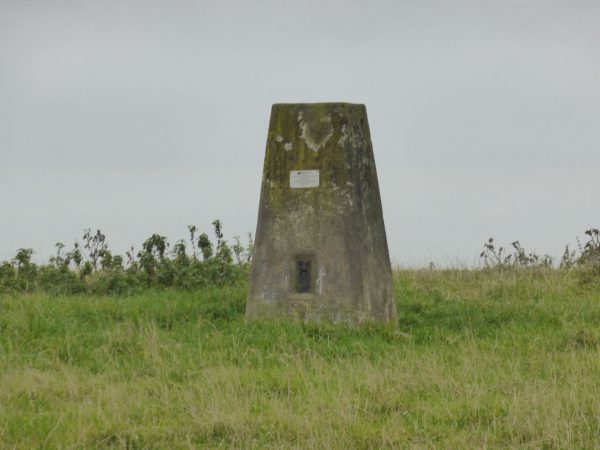 Now high on the ridge we get distant views of the sea to our right, again visibility is hampered by the weather, but the walking is pleasant and so far we have only seen a handful of folk coming in the opposite direction. 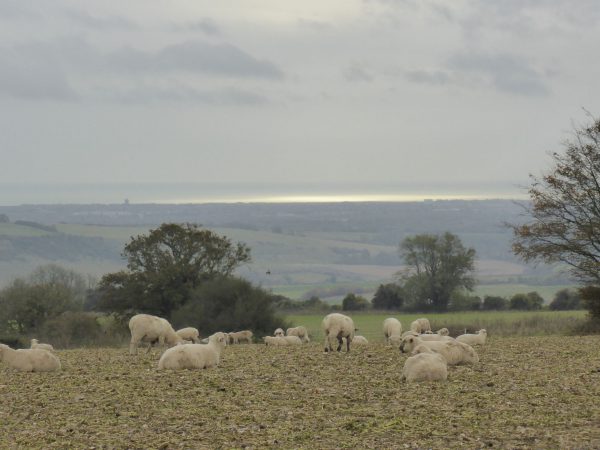 After passing the Kithurst Hill car park on our left we arrive at a tarmac lane, instead of following this we take a footpath heading across a field into woods as it descends from the Downs.  This path leads us to Paygate Cottage, where we cross the B2139 to join Clay Lane following this to the outskirts of Cootham.  On reaching the A283 we turn left and walk a short distance along the pavement before joining a footpath that follows the tarmac drive of Parham House.

The information board gives the first record of the name Parham as 959AD from the Pear Tree Settlement. However, the fruit most associated with Parham is the Golden Pippin Apple originating in the Park’s orchards in 1629.

After passing Douglas’s Lodge we are in the Deer Park and it is not too long before we see the Black Fallow Deer. Over the years I must have seen thousands of fallow deer but I can never recall seeing black ones before. 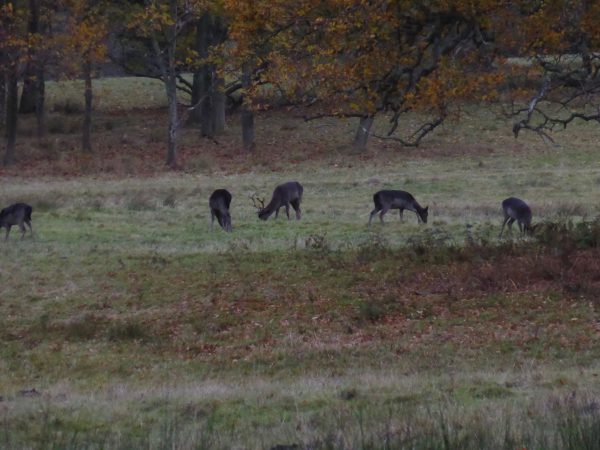 Around the 18th century Dovecote more deer are grazing including a white hind. 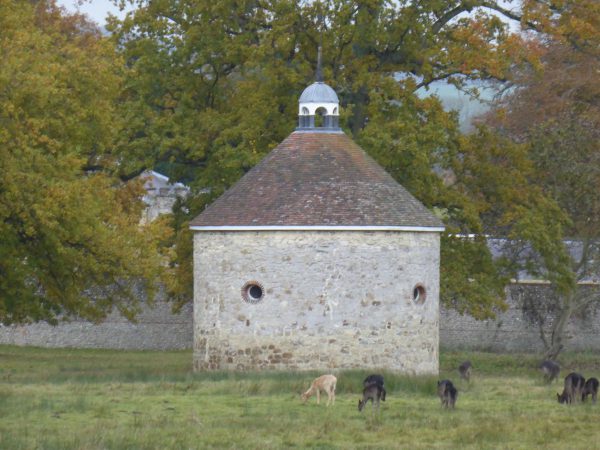 From the earlier information board we gleaned that Robert Palmer purchased the estate in 1540.  However, it was not until 1577 that the foundation stone of Parham House was laid by his son Thomas Palmer.  Apparently Thomas sailed with Sir Francis Drake.  The estate is now owned by a charitable trust, the fine Elizabethan house and gardens are open to the public at various times of the year. 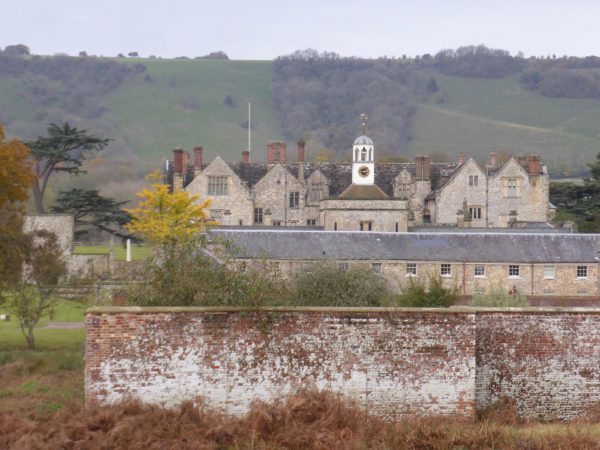 Today we are following the footpath through the park, all the while accompanied by the Black Fallow Deer who don’t seem bothered by us or the dogs, who are, of course, on leads. 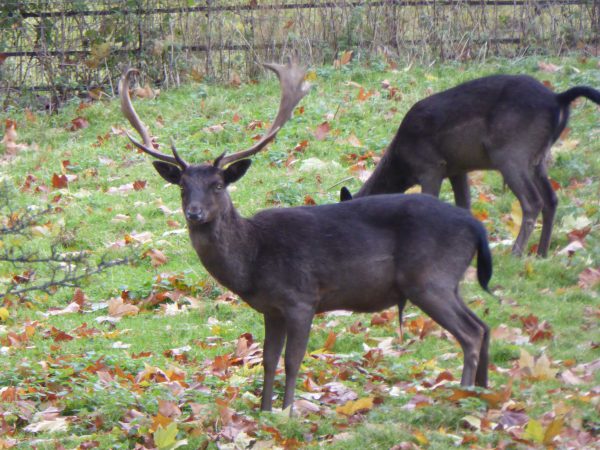 During World War II Parham House was home to thirty evacuee children from Peckham in south-east London.  In 1942 the children moved to Storrington, this resulted in half the house billeting officers of the Canadian Army.  Whilst the soldiers of the 1st, 2nd and 3rd Canadian Infantry Divisions were stationed in Nissen huts in the Park.

We are now on the West Sussex Literary Trail, which we follow out of the estate, turning left after passing West Lodges.  After a short distance along a lane we enter woods walking through fallen leaves until we reach a lane leading to a field where we turn right on the Literary Trail to Rackham Mill.  Apparently this old watermill was built in the 18th century and closed in 1925.  It is a fine old building. 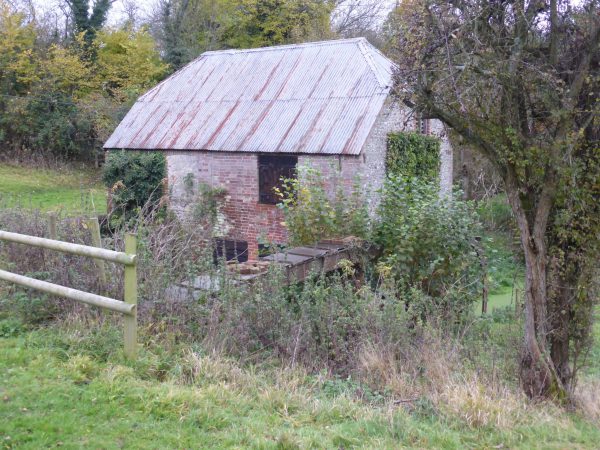 From the mill we climb a stile to go through woodland before crossing fields to climb steadily to the edge of Amberley where we join the Rackham Road and walk west into the village.  There are many attractive houses in this village, the majority of which are still thatched cottages.  I grew up in a village with numerous thatched cottages but unfortunately many were pulled down in the 1960’s to make way for more modern houses.

We continue walking westwards through the village, passing the fine church, to reach the walls of Amberley Castle.  Originally built as a manor house this was fortified in 1377, it is now a private hotel. 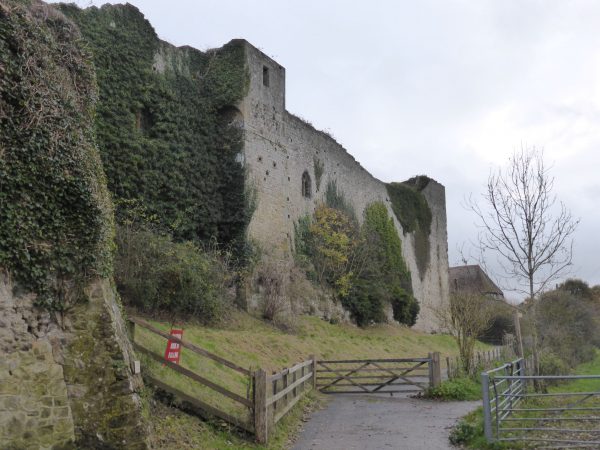 Our interesting wander has covered almost eight miles, next time I am on the South Downs I will hope for a clear day so that we can enjoy the fine views. 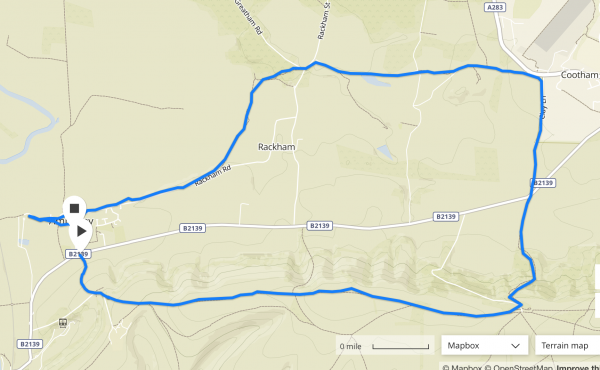