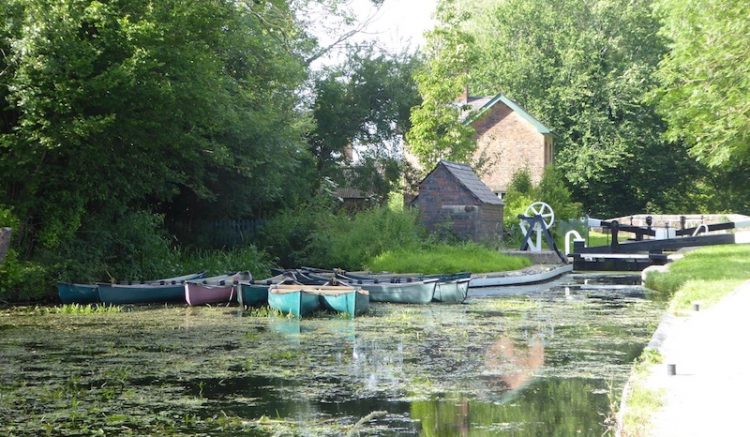 My walk a few days ago along a section of the Montgomery Canal whetted my appetite to explore another section of this waterway.  It is another hot day so I leave it until late afternoon to hop in the car with Crosby and head off to drive the few miles to just outside of Welshpool.

I start my walk from the small Canal and Rivers Trust parking area close to the canal at Buttington Cross (Grid Ref SJ241089).  This is the site of the old Buttington Wharf and at the edge of the car park there are a set of three limekilns, the first was constructed around 1800 and the others are thought to have been built circa 1806 – 1814. 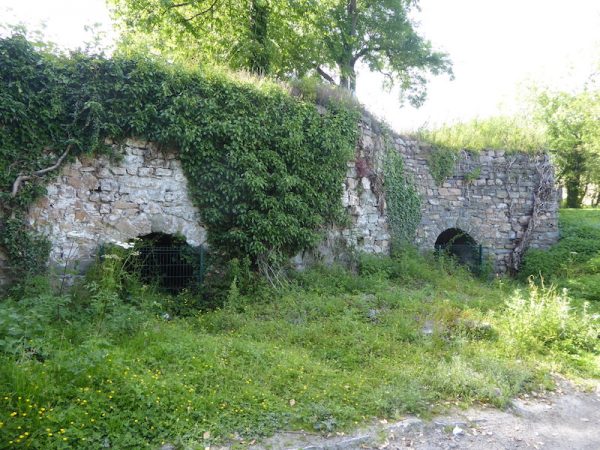 From the car park I walk up to join the canal close to an interesting wood carving of an old man and his dog.  Later I try and find out more about the artist behind the sculpture but fail to find any information. 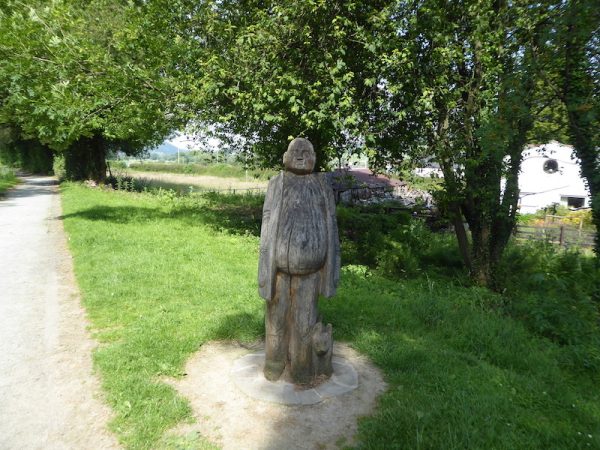 My route is to head north on the canal towpath and I soon reach the Moors Farm lifting bridge (no 114). 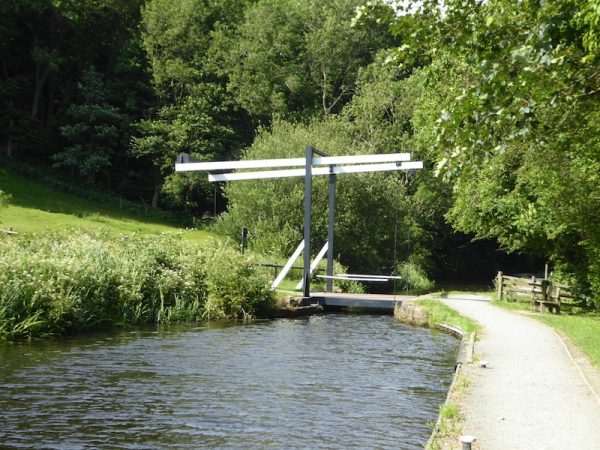 Work on the construction of this canal started in 1793 and was finally completed in 1821.  It was used until 1936 and finally abandoned in 1944.  The canal route was 35 miles connecting Frankton Junction and Newtown. 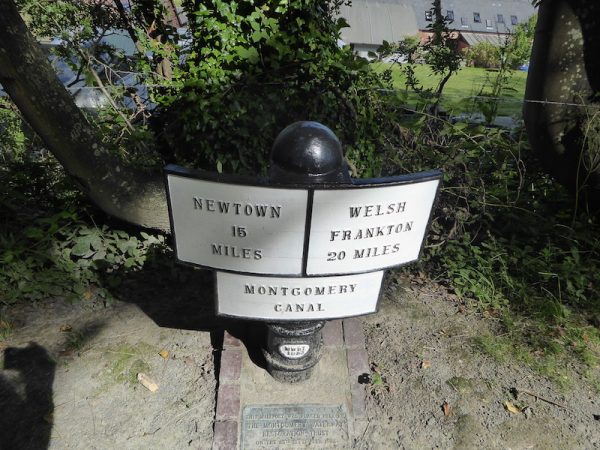 The Montgomery Canal was designed to serve the rural community.  The costs of construction were covered by local farmers keen to use the waterway to transport limestone to make their agricultural land more fertile, hence the limekilns at Buttington Cross. 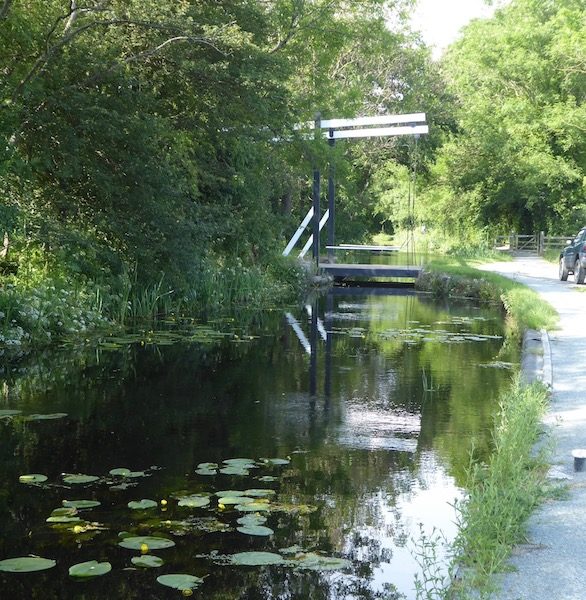 Sections of this canal have been restored, but the part I am now walking along is not navigable, although it looks like there has been work to clear sections of it.  I understand that the Canal and River Trust hope to re-open more sections to pleasure boats. 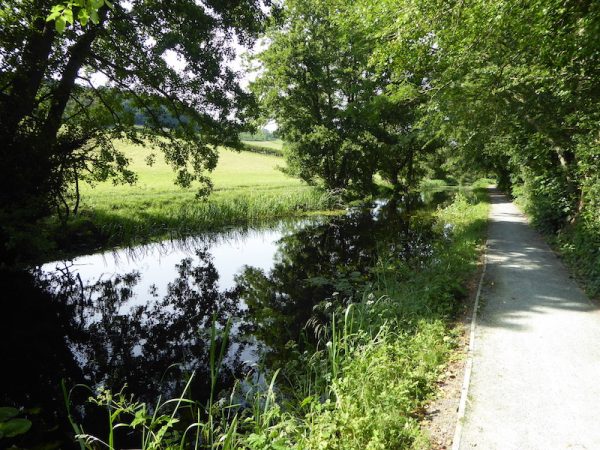 The first lock I reach is the attractive Pool Quay Lock that looks like it has had a recent lick of paint. 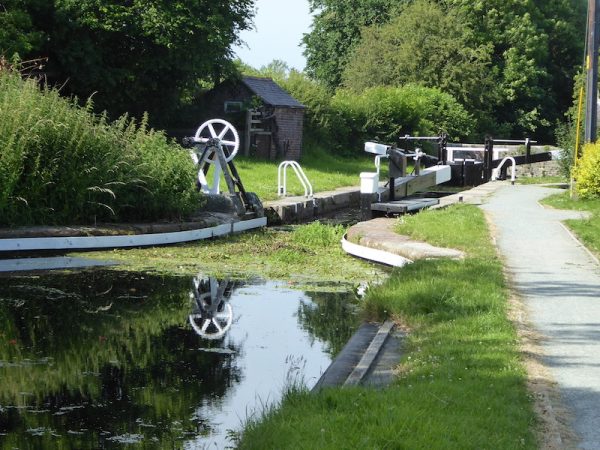 It is not too long before I reach the lock at Crowther Hall.  Apparently in October 1844 the body of Thomas Breese, a bargeman, was found in this lock.  His co-workers were taken in for questioning at his inquest, which concluded his death was as a result of falling into the water and banging his head in the dark, a verdict of accidental death was reached.  It looks very tranquil today. 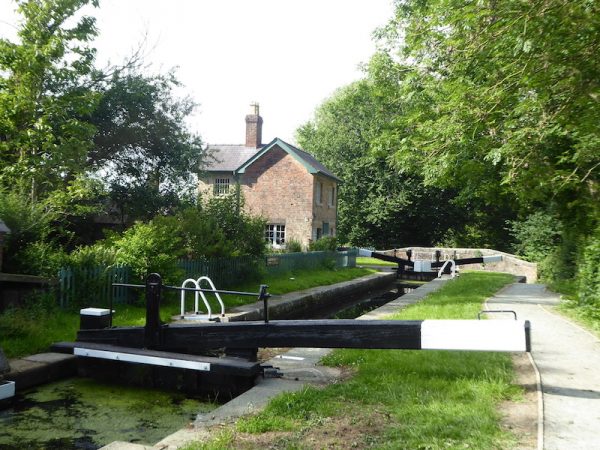 As I approach Cabin Lock I can see Rodney’s Pillar high on the Briedden Hills to my right.  It was a cracking walk up there a couple of days ago. 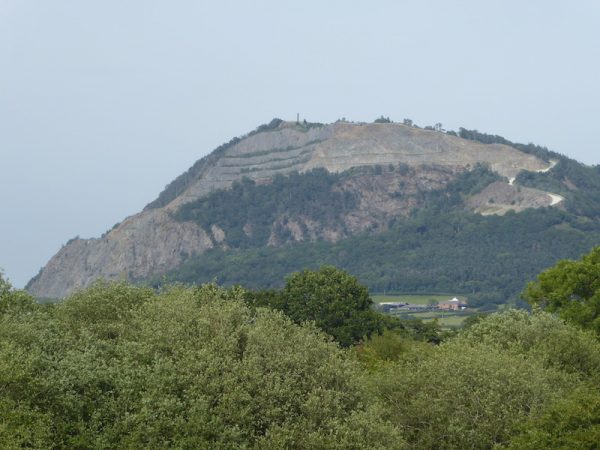 Cabin Lock is another that looks like it has been recently repainted along with work done to make the canal towpath more accessible. 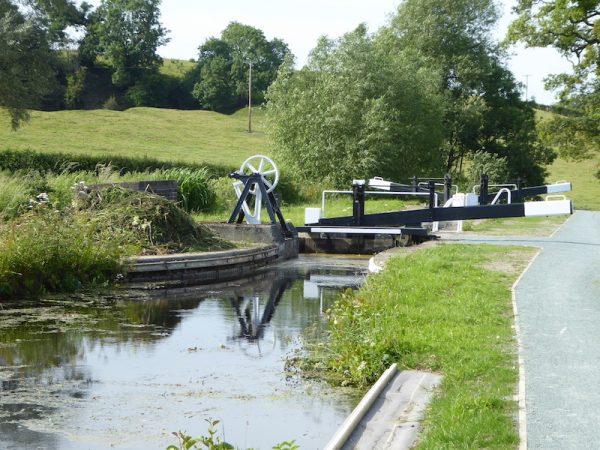 There are now sections of the canal overgrown with weeds. 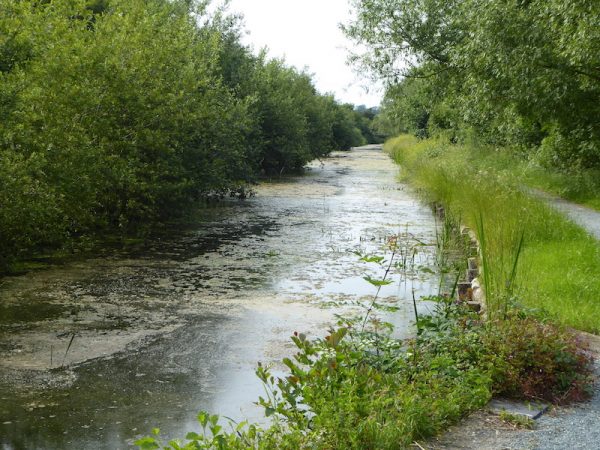 On reaching Wern Red Bridge (No. 106) I leave the canal and turn left on a minor road to cross the bridge. 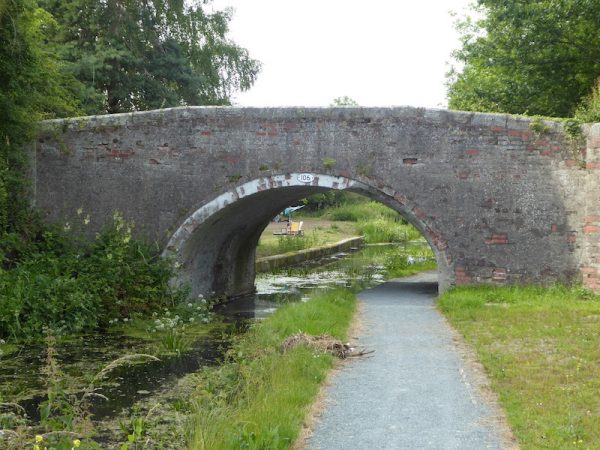 I wander along the narrow country lane to reach a T- junction where I turn left and soon pass the entrance to Wern Farm.  Staying on the road I ignore a junction on the left opposite the entrance to Little Wern Farm and then within a few hundred yards take a turning on the right.

I am wandering along the lane enjoying the sunshine when I realise I have missed the footpath I was looking for, so I turn around and search for a footpath which should have been near the start of the track.  Eventually I locate a gap in the hedge where the footpath used to be.  There is a sign there is an official diversion and I should follow the way-markers.  However there are no way-markers! 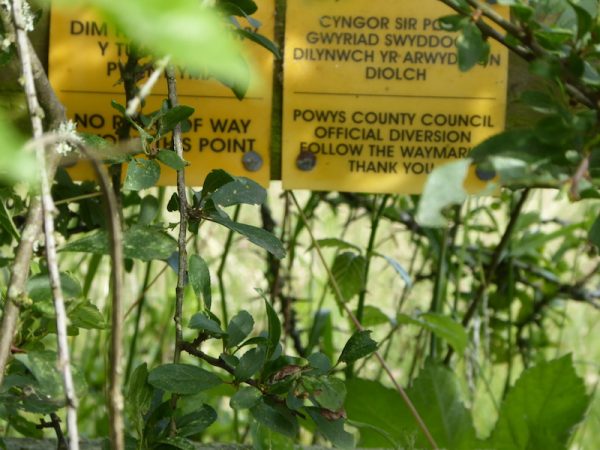 So after consulting the map I decide to walk back to the road and turn right and walk the short distance down to Tanhouse Bridge to re-join the canal. 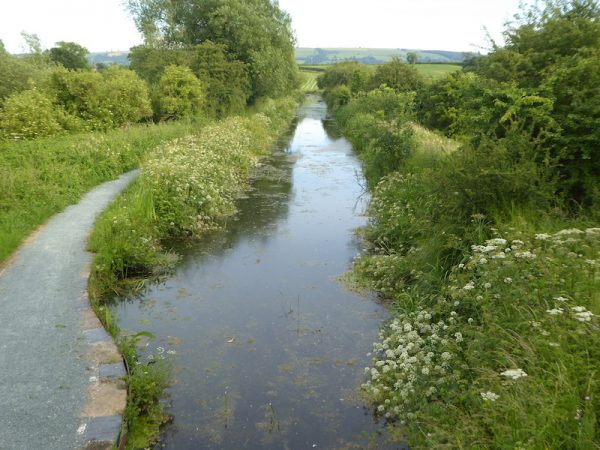 I only stay on the canal towpath for a short section until I reach Bank Lock Bridge, here I leave the towpath and cross the canal and then continue along the tarmac lane (Coppice Lane) as it heads steadily uphill.  Continuing my route I get fine views of Briedden Hill. 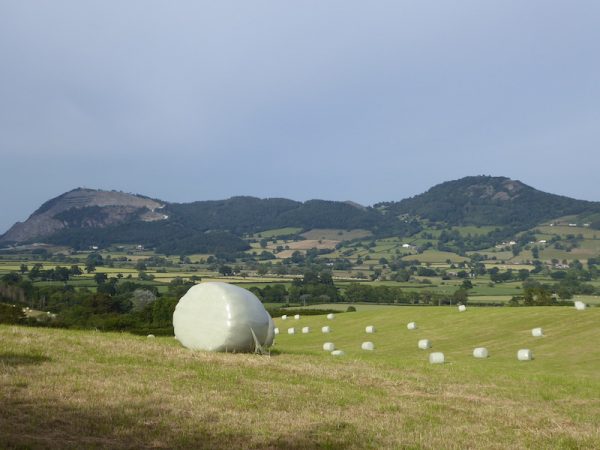 After passing Coppice East Farm the tarmac lane becomes a track as it heads through woodland. 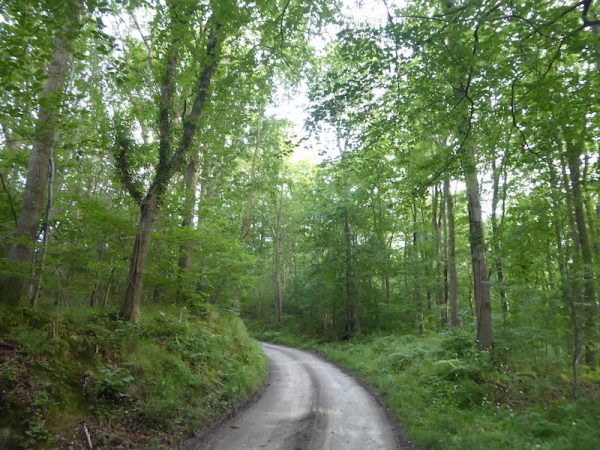 At a junction of paths I turn left and then follow the way-markers around a woodland cottage to an arable field, which I cross.  I then enter a field of pasture and continue on the footpath before making a slight diversion to the summit of the hill to visit the Ordnance Survey Trig Pillar at Yr Allt, my 142nd bagged. 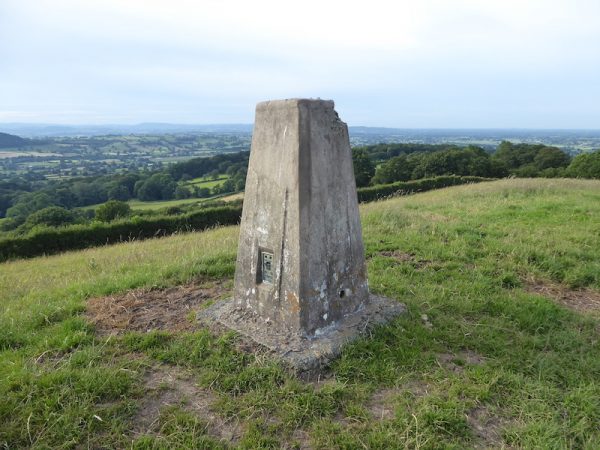 This is another trig with some stunning views. 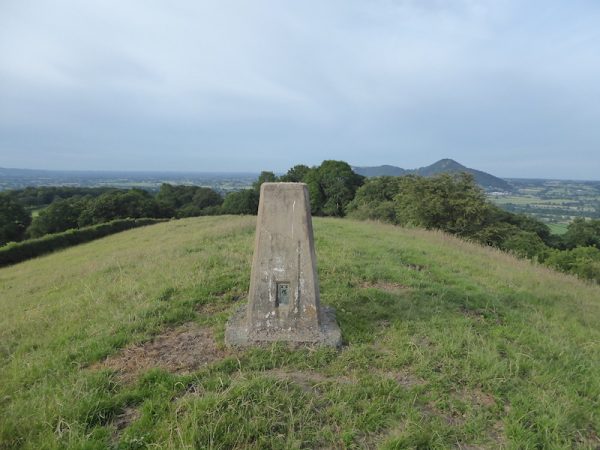 Heading down from the trig I spot a fox cub.  We spend a few minutes staring at each other before he decides we should be avoided. 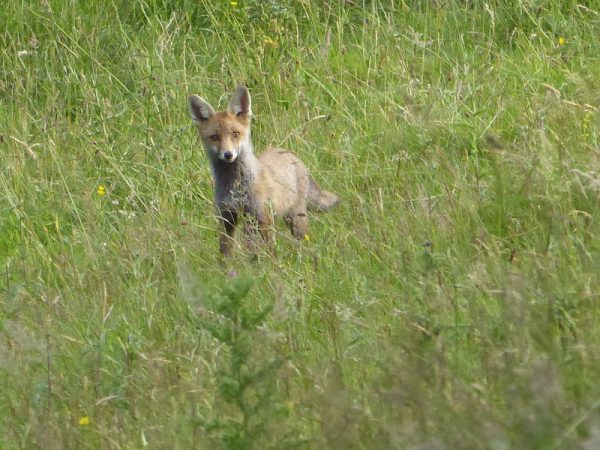 In the next field I spot a Vixen, presumably looking for her wayward cub. 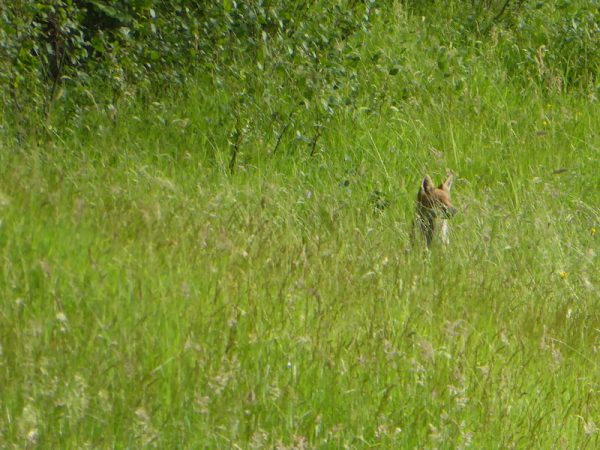 After going through a kissing gate the path follows the edge of a field of pasture. 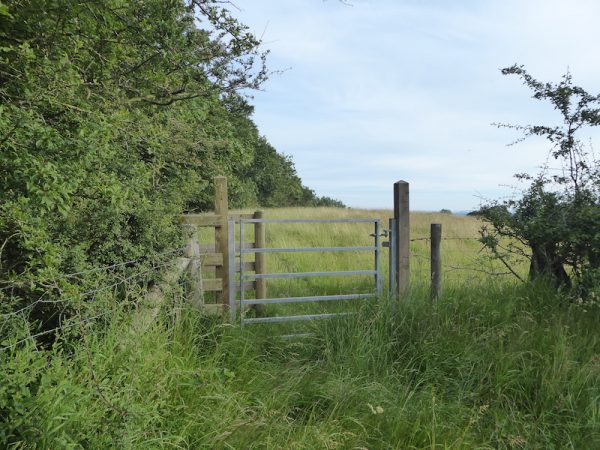 From the next field there is a view across Welshpool. 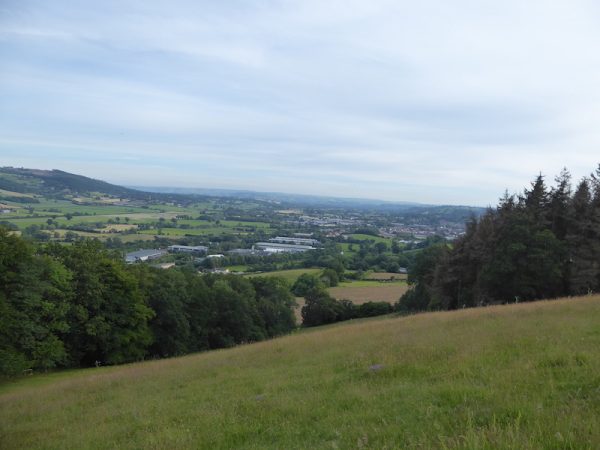 Here I mistakenly follow the track downhill only to discover that the footpath went diagonally across the top of the hill, so I have to retrace my steps up the steep hill and then pick up the footpath leading into the edge of woodland.

The path now descends steadily; at times it is a bit overgrown so the walking pole comes out to beat a pathway through.  It is with some relief that I reach a minor road where I turn left and continue downhill to another junction where I turn left and then walk the short distance back to Buttington Wharf and the car. 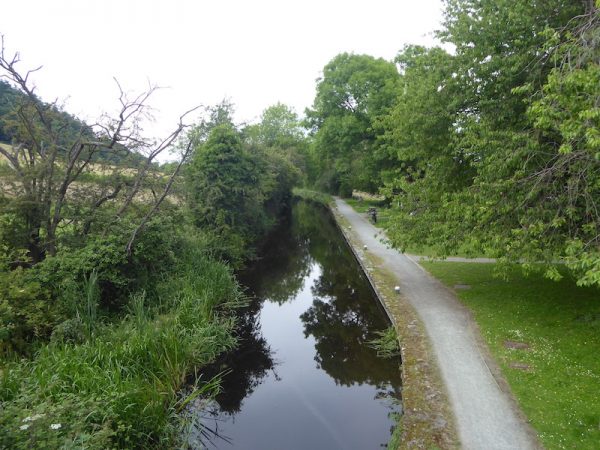 My walk has covered just over nine miles and for the most part has been interesting, but it is always frustrating when a planned walk has to be changed due to impassable footpaths or diversions that are not clearly signed.  It is time to head back to Domo CL to take Dexter out for an evening stroll around the Old Racecourse.