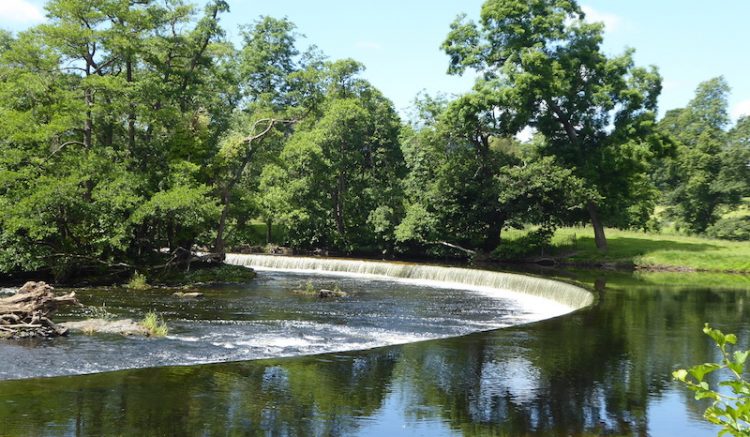 One of the reasons for returning to this area is for Lynnie to visit the Horseshoe Falls at Berwyn.  I visited when I was away on my own last year and when Lynnie saw the pictures she decided it was a somewhere she wanted to go. It is another warm day so Dexter will not want to walk too far, but he should be able to manage a stroll along the canal from the Falls to Llangollen.

We park in the pay and display car park above the falls (Grid Reference SJ197432) and follow the signpost to the Horseshoe Fall. After going through a kissing gate we follow the footpath close to the fence line to walk to Llantysilio Church; an information board explains that the church was probably built in the 15thcentury whilst some parts possibly date from earlier.  Apparently inside the church there are plaques to the poet Robert Browning and the actress Helena Faucit (Lady Martin) who lived at nearby Bryntysilio Hall. 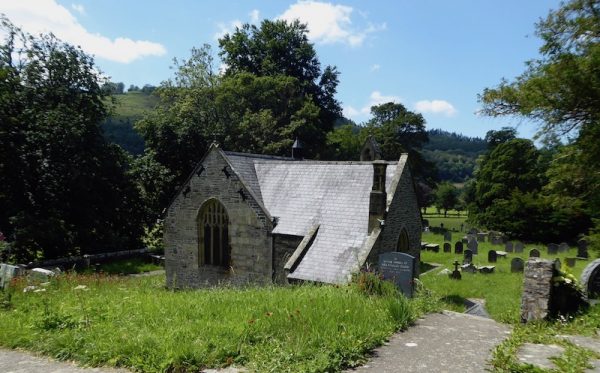 From the church we turn to the left and follow the footpath that heads down to run alongside the River Dee to reach the fall.  This is a cracking spot with significant industrial history. 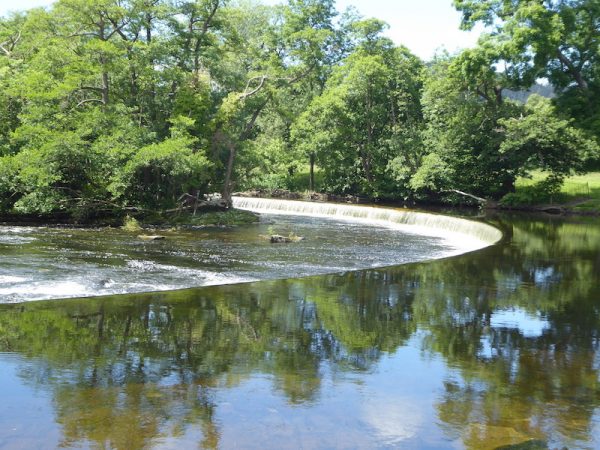 The fall is a weir designed by Thomas Telford and completed in 1808 to ensure a constant water supply feeds the Llangollen Canal, a feeder canal supplying water to the Ellesmere Canal beyond Pontcysyllte.  The weir is 460 feet long and is an impressive sight.  It is not surprising that along with the canal it has been designated a World Heritage Site.

We stop to enjoy the beauty of this spot before continuing on the footpath the short distance to the start of the Llangollen Canal.  I have been along this stretch of canal a few times, but the engineering required to construct it never ceases to amaze me, this initial section is carved out of the rock face with the River Dee way down below on the right. 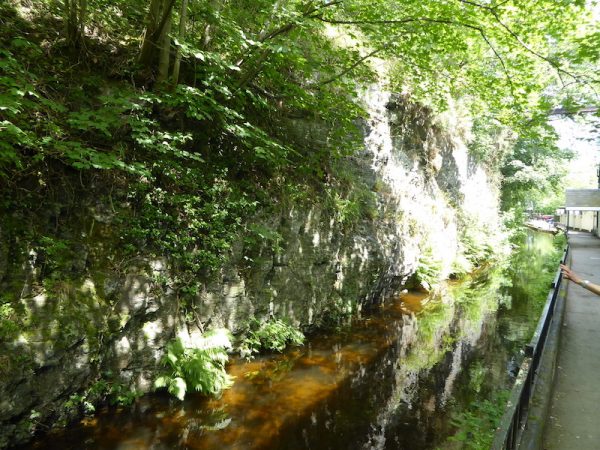 Reaching the Chainbridge Hotel we make the short detour along the path in front of the hotel to reach the chain bridge.  I visited here a few days ago but Lynnie has not been. 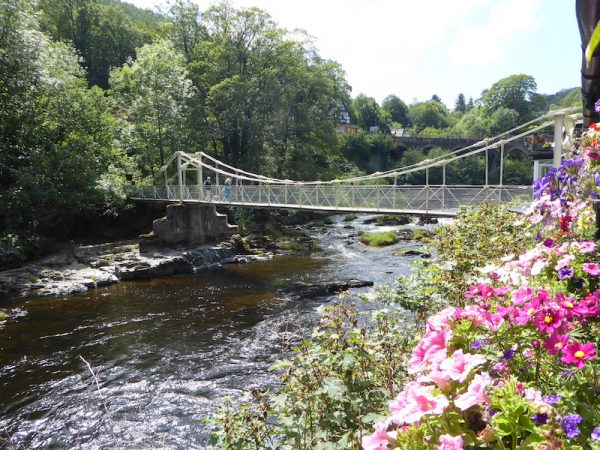 This is the third chain bridge to stand on this site.  The first was built in 1818 by Exuperius Pickering to transport coal, lime and stone from the canal to the road on the opposite side of the River Dee.  The bridge meant that Pickering avoided paying toll fees on the Llangollen Bridge. 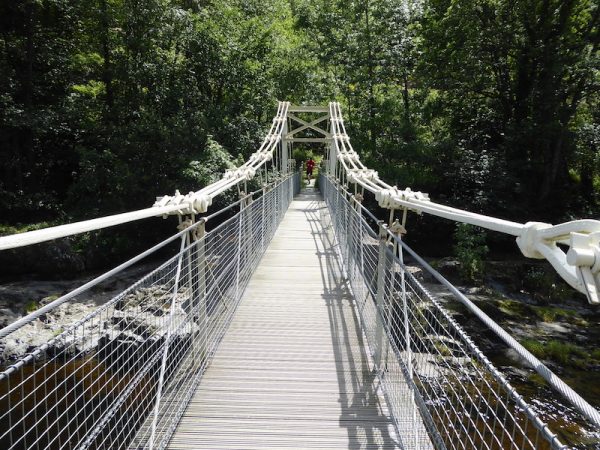 In 1870 Sir Henry Robertson the owner of the nearby Brymbo Steel Works refurbished Pickering’s chain bridge.  However, disaster struck in 1928 when heavy rain and fallen trees on the river led to the water level rising to four feet above the bridge. This is amazing given how far below the bridge the river is flowing today.  Unsurprisingly the bridge collapsed. After the disaster Robertson’s son also called Henry rebuilt the chain bridge this time as a passenger route.  In 2015 it was given a full overhaul. 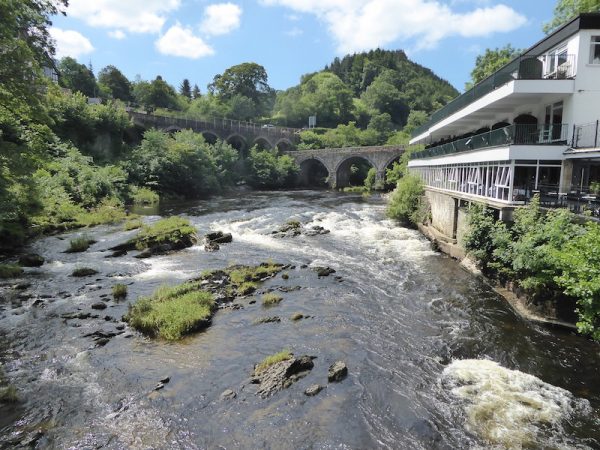 We cross the chain bridge and then retrace our steps by crossing again and going along in front of the hotel to turn right and join the canal towpath heading towards Llangollen. 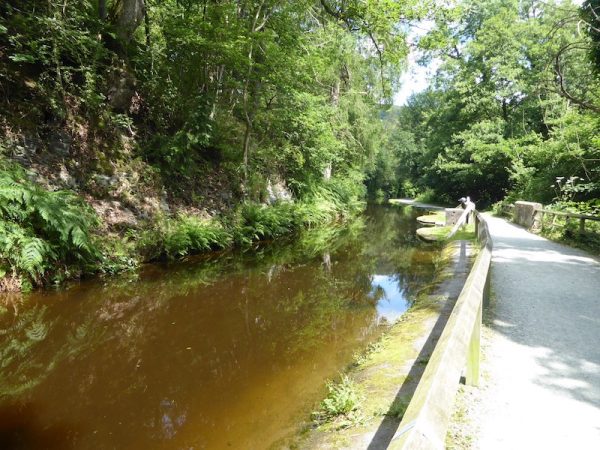 It is pleasant walking alongside the canal, Dexter trots along happily in the dappled sunshine as we make the couple of mile trip to Llangollen.  Nearing the town we pass the site of the Eisteddfod.  This week is the International Eisteddfod and the venue is buzzing with activity.

As we near Llangollen Wharf a horse drawn barge sets off loaded with passengers.    This passenger service has been running for years and is an interesting bit of local history.  According to the companies website it has been operating since 1884 when a chap called Captain Jones was invalided out of the White Star Line. He used a boat to get to Llangollen and thought it might be attractive to others so started a service from Chirk Railway Station to Llangollen.  It has been running ever since, but nowadays horses are not allowed to cross the Pontcysyllte Aqueduct. 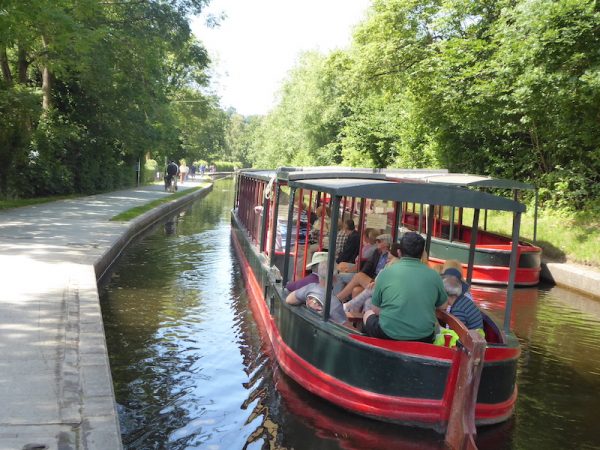 From the wharf we walk down into the centre of Llangollen for a wander around, Lynnie has decided that she should sample some of the local ice cream and I am looking for a bakery for a spot of lunch. 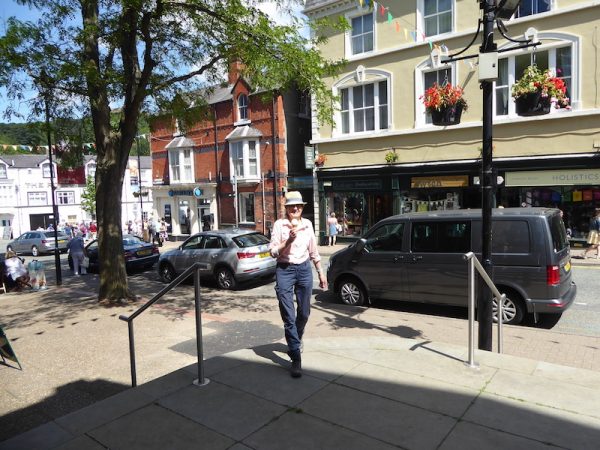 In the small square by the War Memorial a number of fringe Eisteddfod events are taking place and we are just in time to catch the Hong Kong Welsh Male Voice Choir.  This choir formed in 1978 founded by Welshmen living in Honk Kong, however, the choir now consists of 74 members from over a dozen nationalities, all now living or working in Hong Kong.  Despite having sung around the world this is their first performance in Wales. 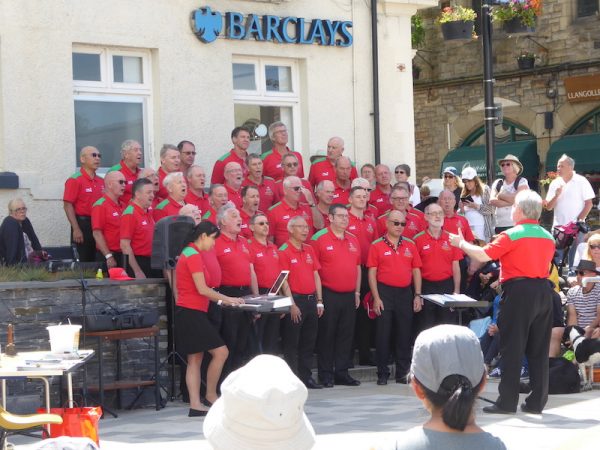 After listening to the choir for a while we start our return journey by wandering back up to Llangollen Wharf to re-join the canal towpath.  After a mile or so Dexter is struggling in the heat, so he and Lynnie wait at the Pentrefelin Bridge (No.48) whilst Crosby and I continue on to collect the car.

As I near the Horseshoe car park I hear a steam train pulling into Berwyn Station so take a detour to the road bridge arriving just in time to watch the engine pulling out of the station.  This train runs on the Llangollen Heritage Railway that since 1981 has operated on the ten miles of track between Llangollen and Corwen.  When built in 1865 the line ran between Ruabon and Barmouth but trains ceased running in 1965 when the line fell victim of the Beeching Cuts. 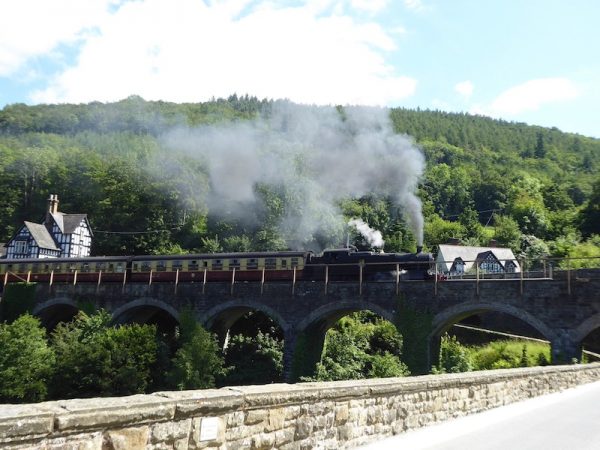 After watching the train depart I make the short walk to the car park.  Our walk has covered 4.5 miles, which on a hot day has proved too far for Dexter so I now need to head off to pick him and Lynnie up.