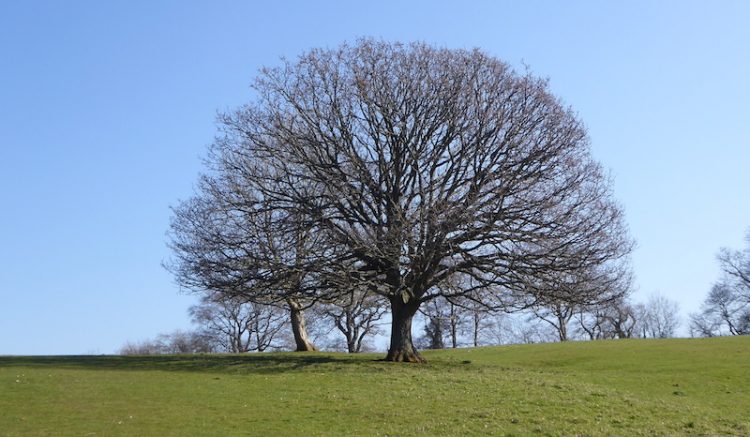 After just a few days at home we are away in the caravan again. This time we have headed west and returned to the Caravan and Motorhome Club site in Minehead.  We don’t stay at many main sites, preferring the smaller CL sites, however, this site is an ideal spot out of the main holiday season.

What should have been a straightforward journey yesterday was complicated by a road closure between Taunton and Williton.  Unfortunately, it was not until we had travelled through Taunton that we found the closure and that meant a long and arduous journey back through the town to take the diversion through Bridgewater.

Road closures are a pain when you are travelling by car, but when towing a caravan they can quickly turn into a nightmare.  However, we took the sensible approach taking the long diversion.  Had we just been in the car my local knowledge would have saved a few miles, but I wasn’t prepared to risk pulling the caravan down narrow single-track lanes.

Today’s walk is directly from the caravan site. From the main entrance we cross the road and turn left up the hill walking alongside the A39.  On reaching Hopcott we cross the main road and follow the minor road uphill to reach a car park in the woods.  There are a network of paths leaving the parking area, we take the one on the right that continues uphill following the route of the Macmillan Way West. 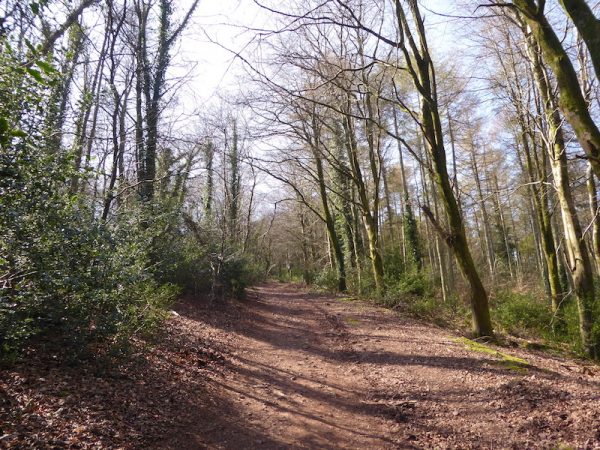 At the next crossing of paths we continue through the trees on the Macmillan Way West. It is a cracking day and it is warm walking uphill in the spring sunshine so there are no complaints when we stop to admire the trees in Staunton Plantation. 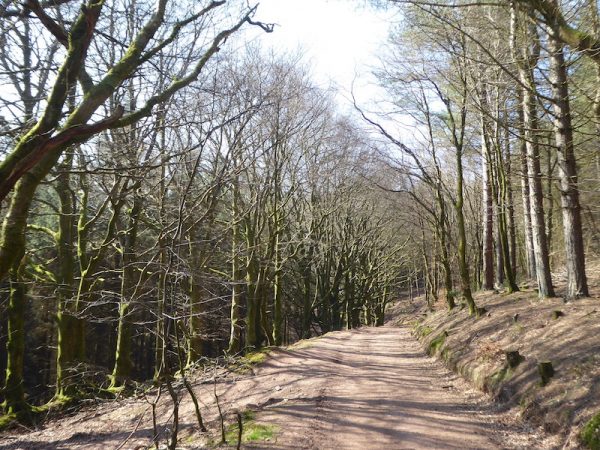 The route emerges from the trees and carries on to a crossing of paths; here we turn left and follow the broad track on the public bridleway signposted to Dunster. 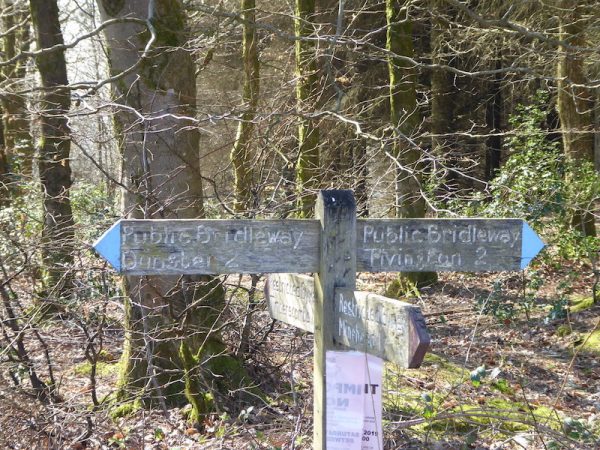 At Hole’s Corner we continue straight along the track on the route of the Macmillan Way. 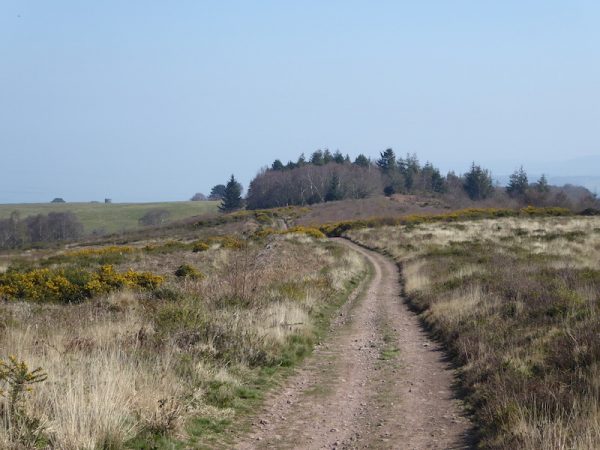 Reaching the Iron Age hillfort at Grabbist Hill we take a path on the left signposted to Dunster – avoiding a steep path.  Dexter has begun to struggle going down steep paths, and it is a bit easier on our knees too! 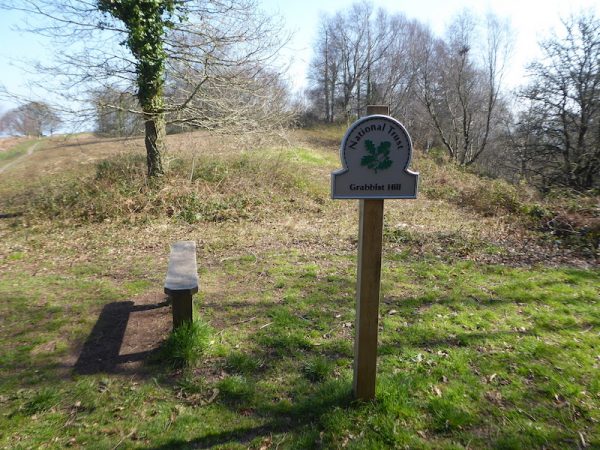 At the next junction of paths we turn left to follow the signpost to Dunster along a tree-lined path heading steadily downhill. 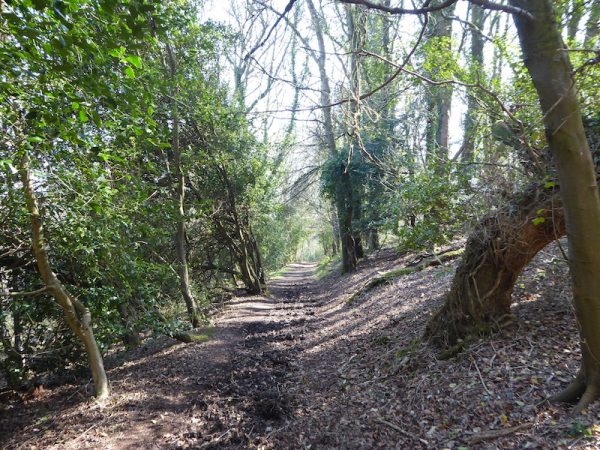 The path brings us into Dunster besides allotments and the graveyard. 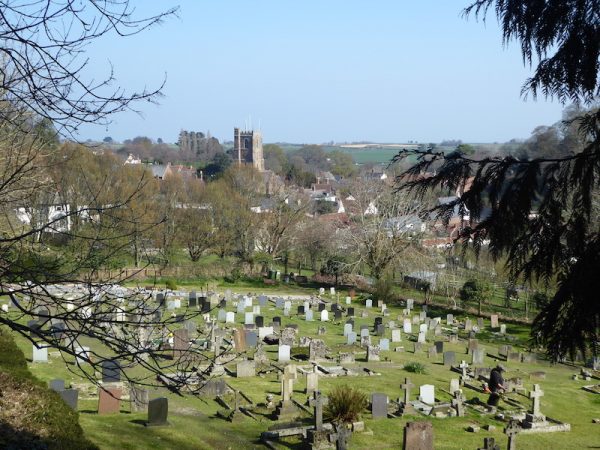 Dunster is a delightful village built in the shadow of the impressive Dunster Castle, it is sometime since we visited and we decide to wander though the village before continuing our route. 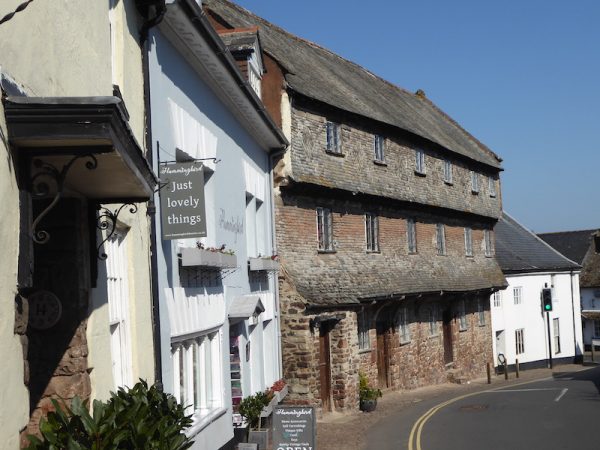 At the top end of the village is the octagonal Yarn Market cross. This was originally built around 1609 by the Lutterall family, who were major landowners in the area, including Dunster Castle.  As the name suggests the Yarn Market was predominantly used for trading cloth and wool. At the time Dunster was a major centre in the wool trade. 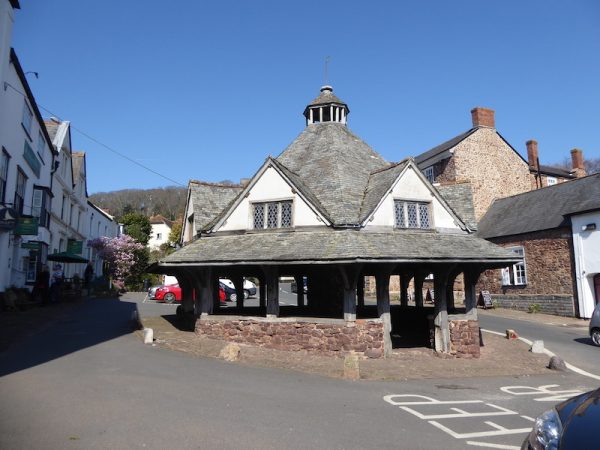 We continue through the village soon reaching a refreshment kiosk by the Tourist Information Centre. I had thought we might have a cup of tea, but Lynnie soon spies the sign for ice cream.  Lynnie is discerning in her ice cream tasting, she likes it locally produced and is therefore tempted by the Styles Ice Cream, produced on a farm at nearby Rodhuish.  It certainly gets Lynnie’s seal of approval. 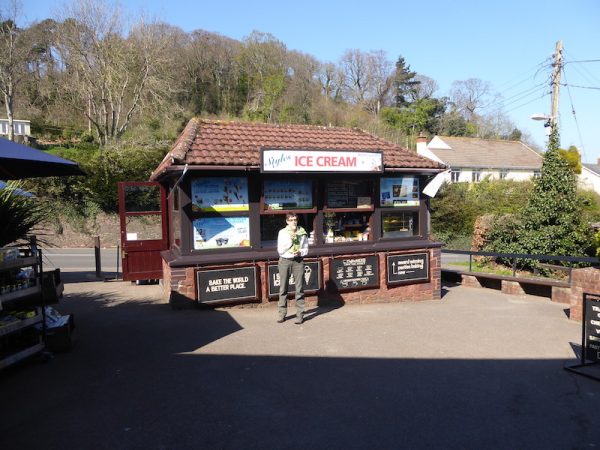 We head back through Dunster, passing the entrance to the Castle and the church and then  turn on the left down Mill Lane.  Here we take a slight detour, continuing down Mill Lane to visit the Castle Mill. 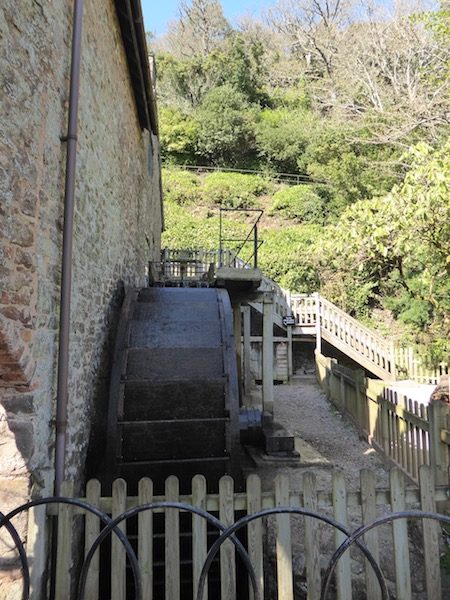 Apparently the Doomsday book recorded in 1086 a mill on this site. The current mill was built around 1780 and was used to ground grain until its closure in 1962.  In 1979 it was restored to working order and now produces organic flour.

It is in idyllic location surrounded by pathways through grounds that adjoin the stream.  So we happily wander around. 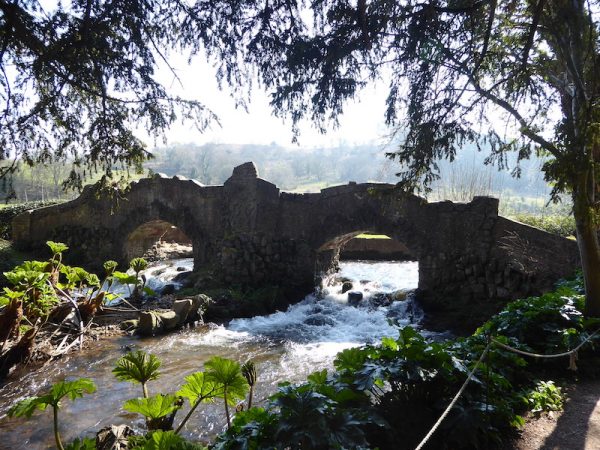 Resuming our walk in Mill Lane we take a footpath signposted to Gallox Bridge, this grade 1 listed medieval packhorse bridge crosses the River Avill was at one time the main route into Dunster from the south. Its name derived from its proximity to the village gallows, which stood on nearby Gallox Hill. 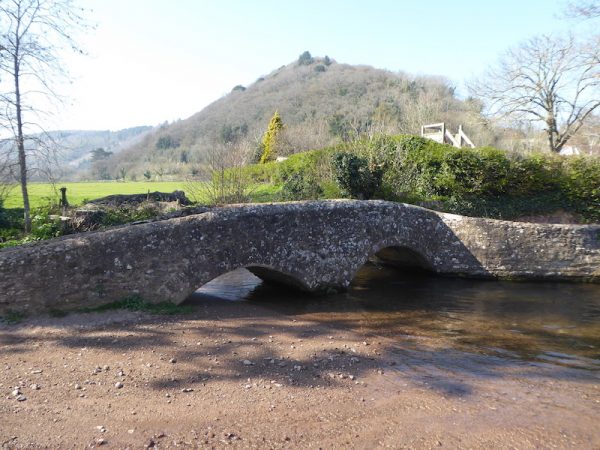 We cross the bridge and head towards the woods in front of us and then at a junction of paths we turn left to follow a footpath through the Deer Park. 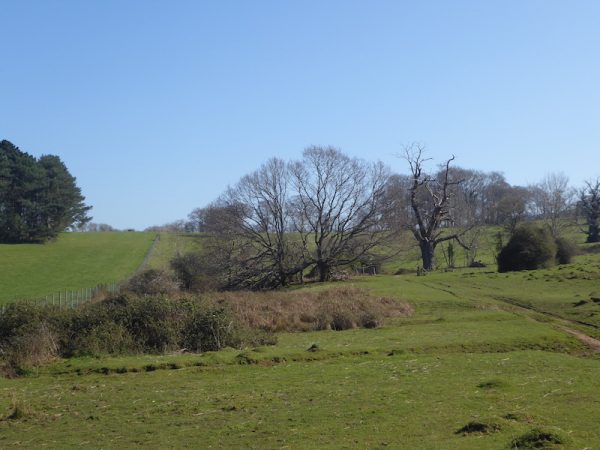 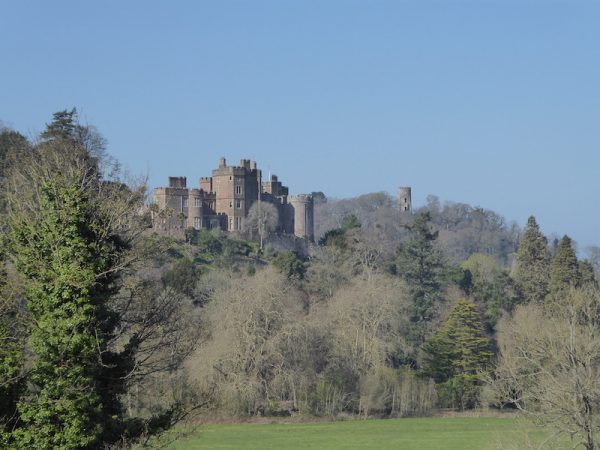 Our route through the Deer Park is straightforward and on reaching Carhampton Gate we join a track leading down into the village of Carhampton where we turn left down the High Street to reach the A39.  Here we turn right and cross the road to continue along the pavement to the church of St John the Baptist.  The current church was built in the 1860’s but still retains some of its 15thcentury features including the wooden pulpit and painted wood screen. 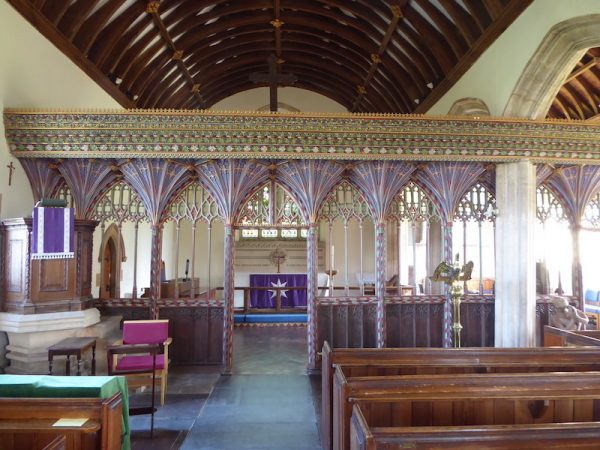 We take it in turns to go inside, on our travels we have encountered a mixed reaction to taking the dogs into church.  Some folks welcome “all of god’s creatures” whereas others frown on our four-legged friends entering a place of worship.  It does provide us with an opportunity to wander around the graveyard, which I always find interesting. 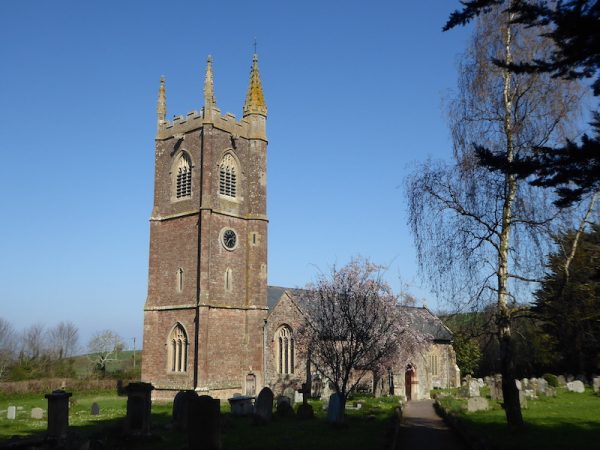 Continuing down the lane to the left of the church, we turn right at a footpath sign to walk along a field edge path. We stay on the footpath across a stream. 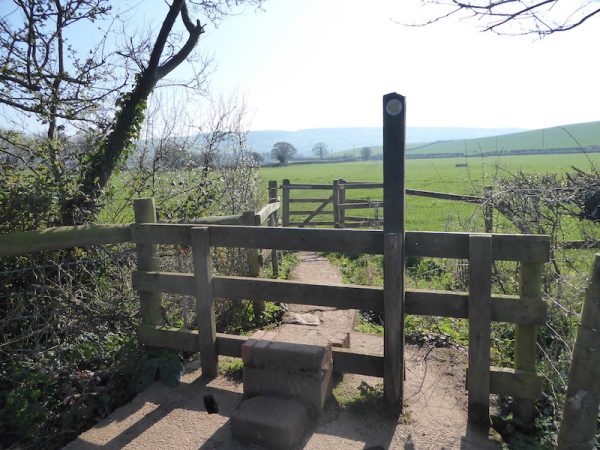 On the far side of the stream we cross a field to reach the West Somerset Railway line, which we cross with care heeding the sign to “Stop, Look and Listen”. 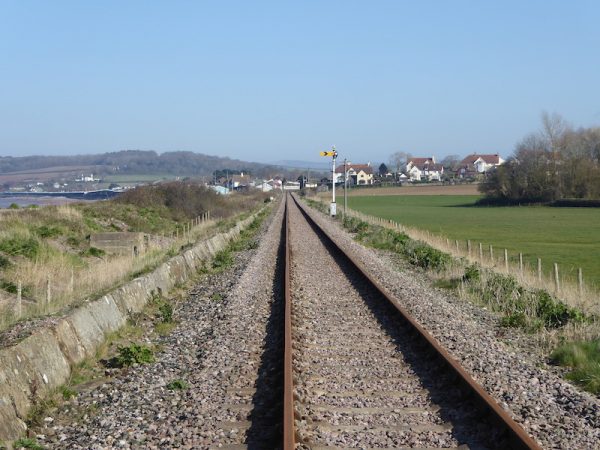 On the far side of the track we turn left on the footpath heading towards Dunster beach. 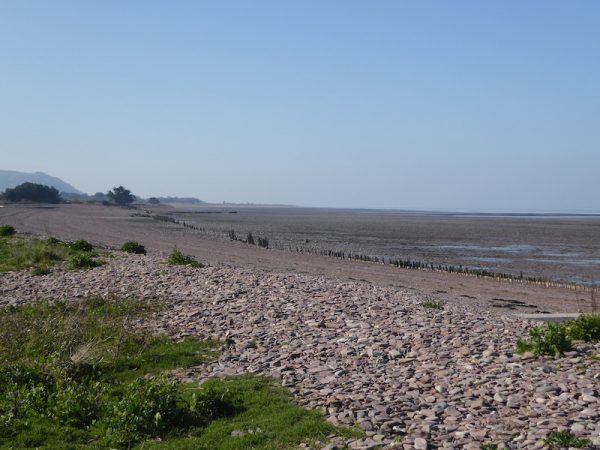 After going through a car parking area we pass an estate of holiday chalets to reach the end of the Minehead and West Somerset golf course.  Our path now skirts around a World War II pillbox before continuing alongside the golf course. 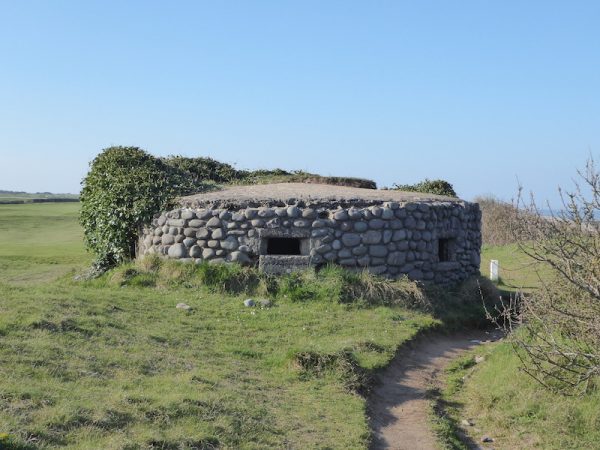 The last time we walked past this golf course it was blowing a gale, but today it is tranquil and the course looks inviting.  As we walk we discuss the merits of my continuing to be a member of the golf club I joined thirty-four years ago.  Before we left home I received notification of another hike in the annual fees and it is difficult to justify the cost when away so much.  On the counter side is the time I spend with my golfing buddies, chaps I have met through playing golf and would seldom see if I stopped playing.  Despite my intermittent playing I can still be competitive off my current thirteen handicap. I will soon have to decide if the clubs are going to be used again or if it is time to take a break from the game. 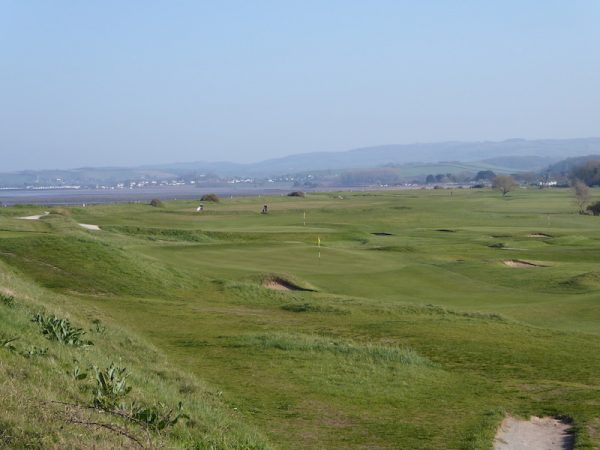 We arrive in Minehead by the entrance to Butlins holiday camp, there are plenty of cars in the car parks but none of the current residents have ventured onto the beach, which is absolutely deserted. 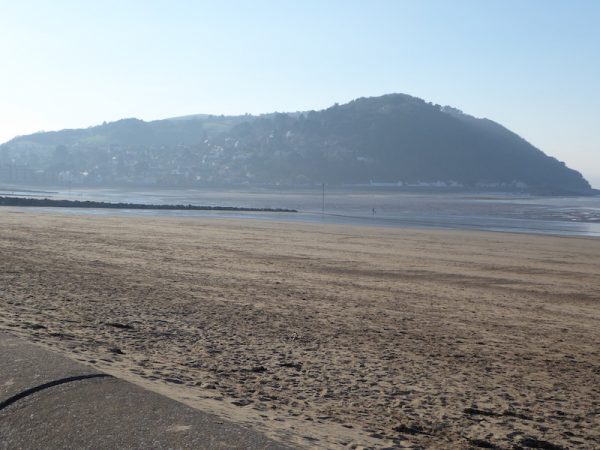 From the centre of Minehead we follow the roads back to the caravan site.  Our walk has covered just over twelve miles and has been a cracking wander.