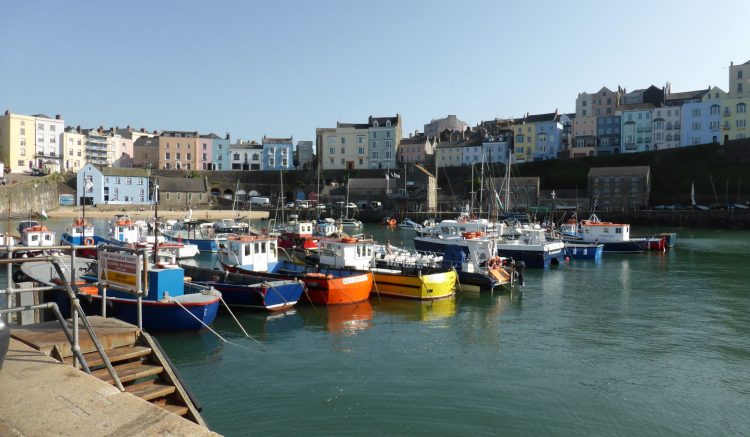 The sun is shining and Dexter and Crosby are keen to head to the beach and run around.  Lynnie is still struggling with her back so taking a stroll where the dogs can run on the beach, thereby covering much more ground is ideal for her.  I also have a suspicion there is an ulterior motive; an opportunity for an ice cream on the beach!

Ron, the owner of Woodstock CL has told us that parts of Tenby beach are accessible to dogs and that if we catch the tide right there will be an expanse of sand for Dexter and Crosby to play on.  We have not previously visited Tenby so follow the car park signs and park in the centre of town.  I was not sure what to expect of Tenby, but I certainly did not imagine the impressive town walls across the road from the car park entrance.

From the car park we turn right and head towards the esplanade and are greeted by a huge expanse of sand, which is South Beach.  To our left is St Catherine’s Island. 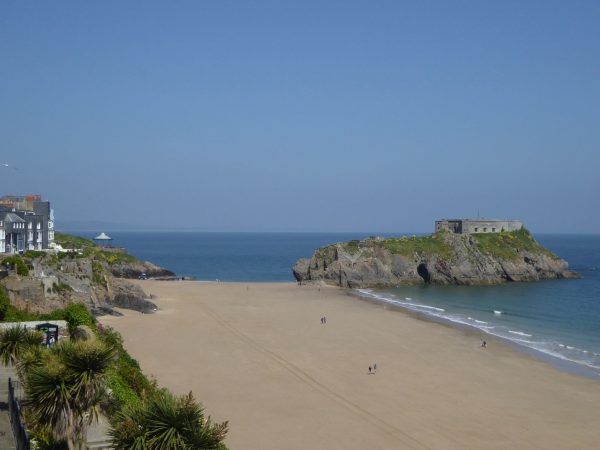 The dogs are only allowed on the western section of this beach but it is enormous so there is plenty of space for them to run around.  They are eager to get there and are straining on the leads as we follow the zigzag pathway down to the beach.

We amble along the beach, it is ideal for Lynnie’s back and the boys just love it. 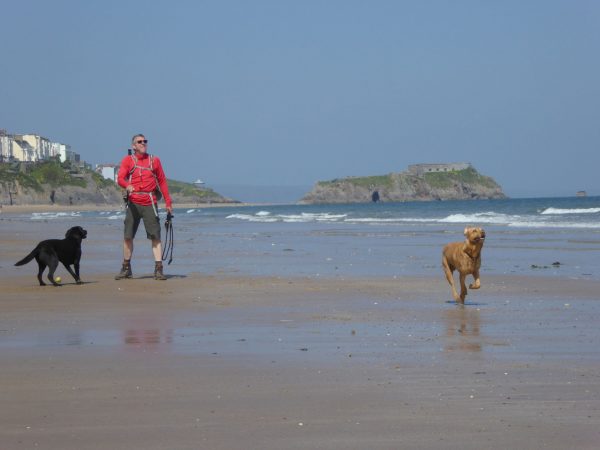 Of course it does not take Crosby too long to decide to go in for a paddle. 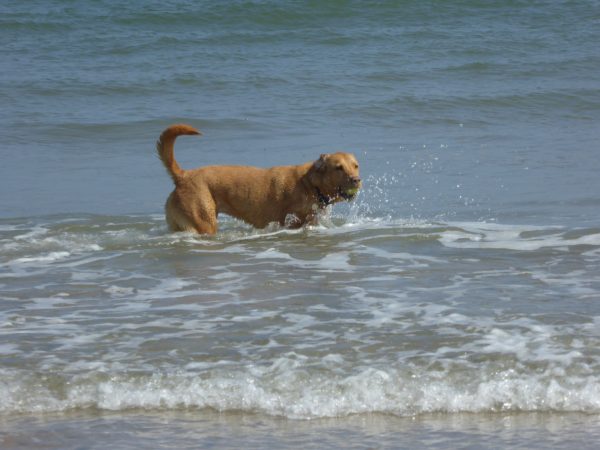 Lynnie is busy looking for “treasure”.  The beach is strewn with hundreds of massive stranded jellyfish. 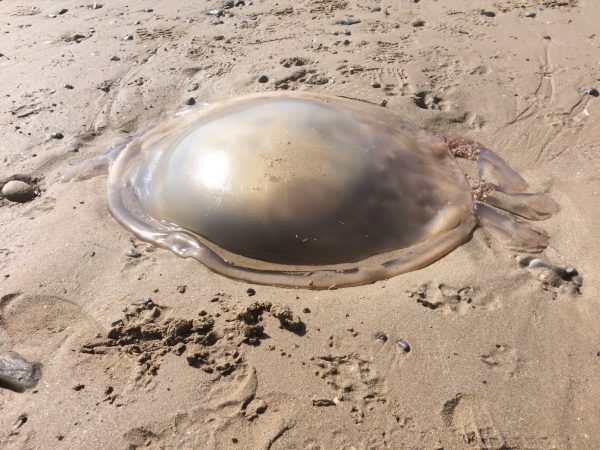 As we approach Giltar Point we get a clear view of the lighthouse on Caldey Island.  This lighthouse was constructed in 1829 and helped those crossing the Atlantic distinguish between the Bristol Channel and the English Channel. 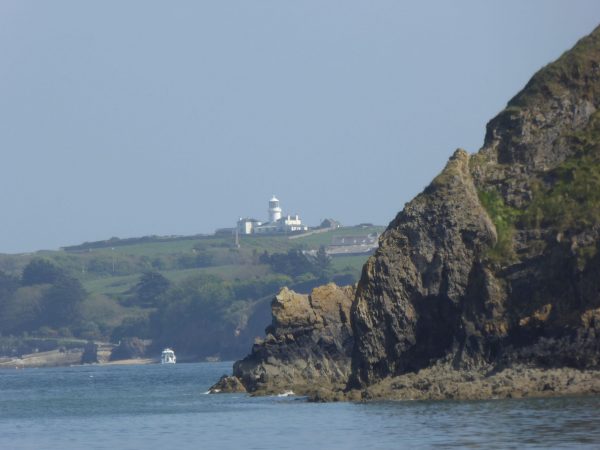 Caldey Island was inhabited long before the construction of the lighthouse.  Apparently in the 6th Century a Celtic monastery was established on the island, then from the 12th Century until the dissolution of the monasteries in 1536 in was home to Tironensian Monks.  The monastery now on the island was first established in 1910 by Anglican Benedictine Monks, but after financial problems ownership transferred to Belgian Cistercian monks.

Walking to the end of the beach is about as far as Lynnie wants to go so we turn around and wander back along the shoreline.  With the tide out we are a long way from the dunes and Lynnie spots an ice cream van patrolling the beach, there is no way she will catch that up with her bad back! 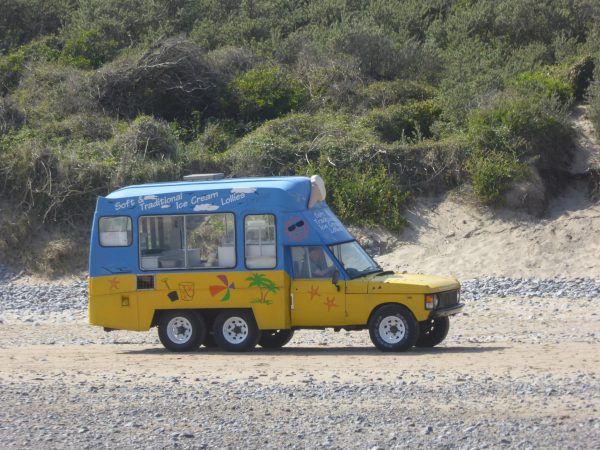 It is a very pleasant stroll back, there are not many people around, I am sure in the height of summer this place will be packed. 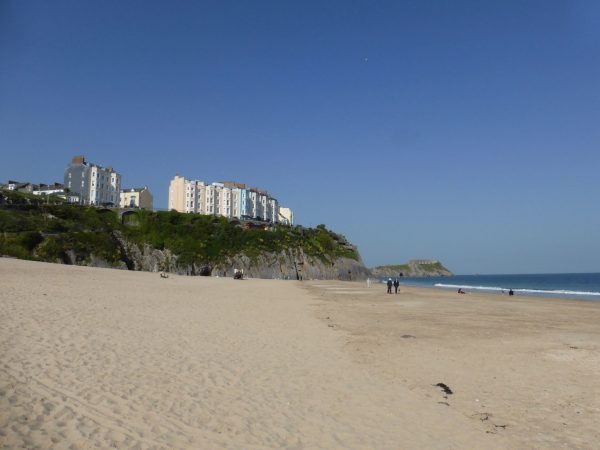 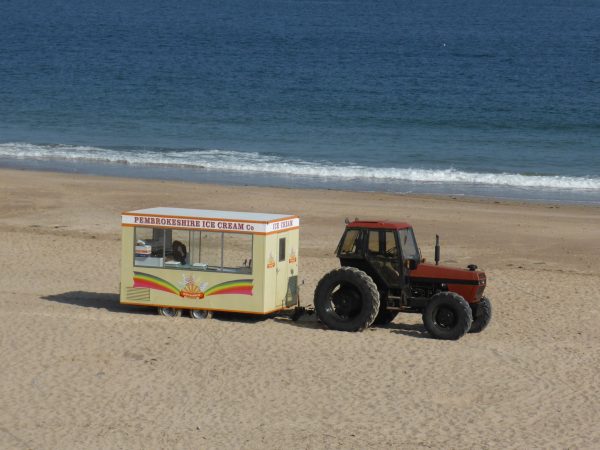 Unfortunately, on reaching it it closes so a disappointed Lynnie and I carry on and wind our way through the streets towards the harbour.  Along the way there is a proliferation of blue plaques marking where famous people have stayed in the town.

The harbour is picturesque; unlike many we have visited this one still has a strong presence of trawlers amongst the pleasure boats. 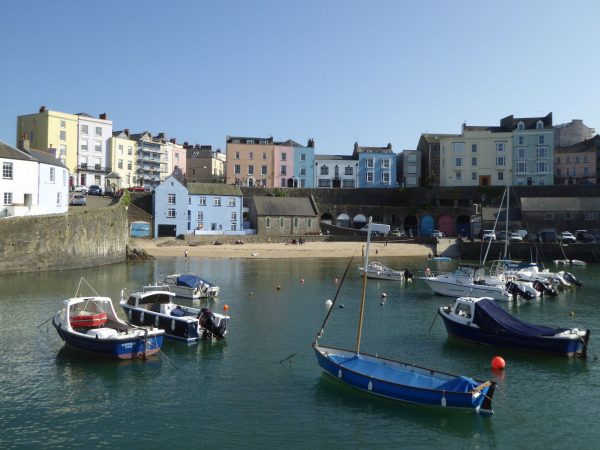 From the end of the harbour pier we get a good view of the old Lifeboat Station, this has been converted into a home and featured on Chanel 4’s Grand Design programme a few years ago. 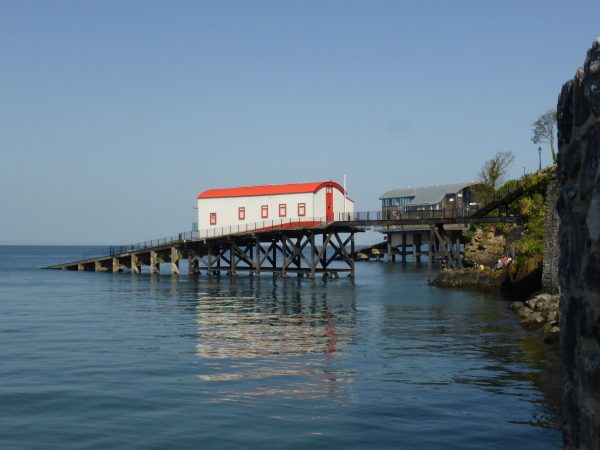 The front wall of the harbour pier was damaged in heavy storms in October 1869 and was rebuilt.  Besides providing shelter for the boats it is a fine spot to view the sea and town. 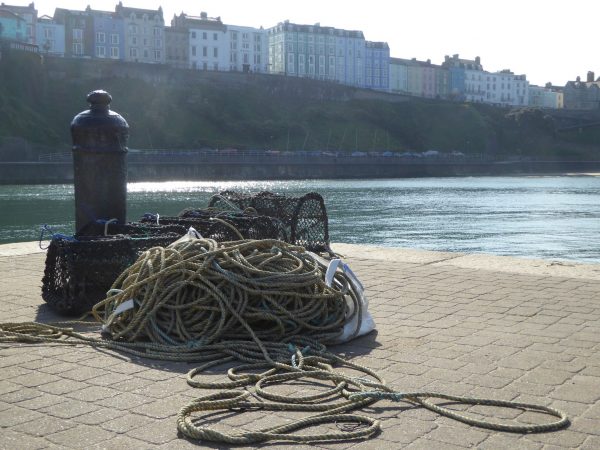 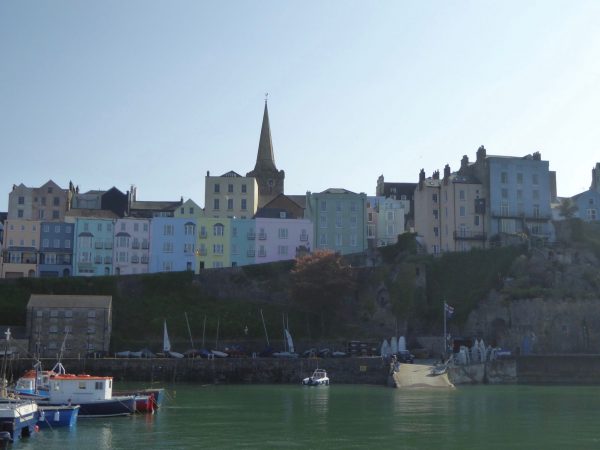 Leaving the harbour we pass a blue plaque which states “Roald Dahl children’s author stayed here in The Cabin every Easter Holiday between 1920-36 with his Mother and siblings”.  When our children were small we read them Dahl’s books, my personal favourites were the BFG and Fantastic Mr Fox. 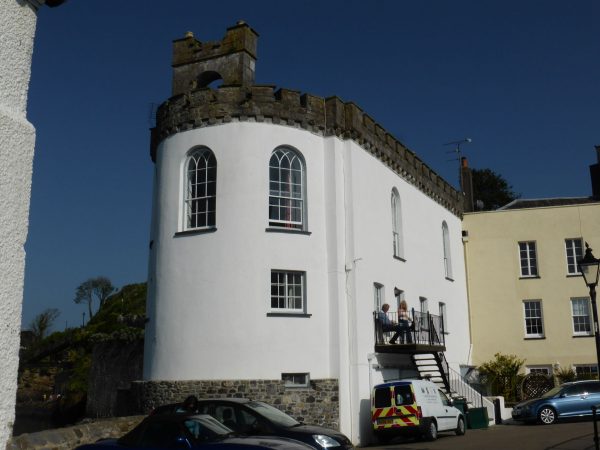 We are just ambling around and head next to Castle Hill to find out who is commemorated by the statue we have spotted whilst walking around.  We discover it’s the Welsh National memorial to Prince Albert, the consort of Queen Victoria.  He died in 1861 and over 16,500 people are said to have subscribed to this memorial erected in 1865. 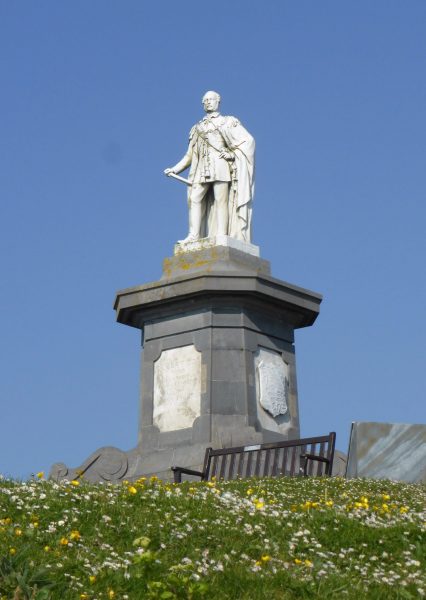 At the end of Castle Hill a bandstand overlooks St Catherine’s Island, this is a modern structure and the plaque on the wall explains that it was initiated by the Tenby Ladies Committee and opened in August 1991.  Previously a bandstand stood on this spot, built in 1897 to commemorate Queen Victoria’s Jubilee, but it was dismantled for its metal during World War II. 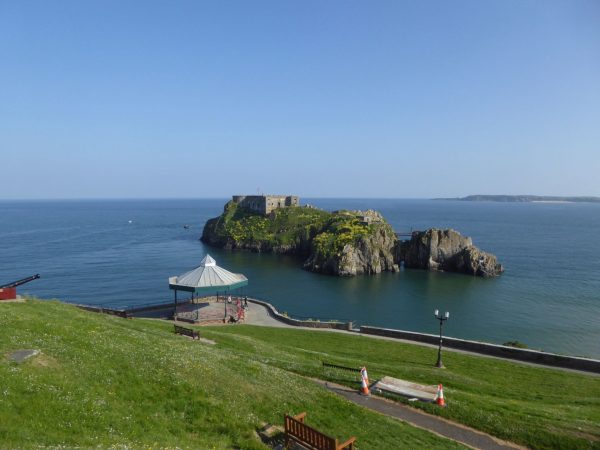 The tower on Castle Hill is all that remains of the original Castle built by the Normans in the 11th Century. 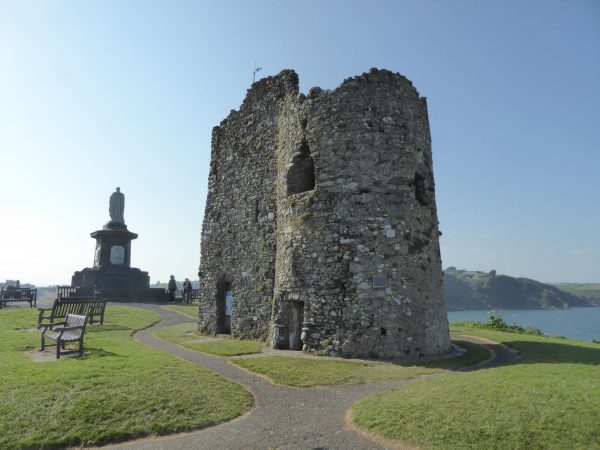 Castle Hill provides a great view of St Catherine’s Island and the fort dominating it.  This fort was built in 1867 to  defend against an invasion by French troops led by Emperor Napoleon III of France. 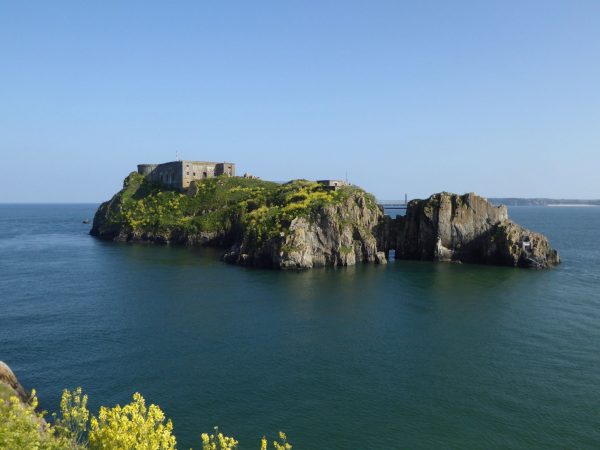 Apparently, during World War I it was used as a garrison for troops and then in World War II it was used as an anti-aircraft battery.  After the war it was sold and became a private residence.  Then in the 1970’s it was used as a zoo.  In more recent times the fort has been open to the public, and restoration undertaken, however it would appear that financial constraints have hampered the project and the fort closed in August 2016.

This is a fascinating town, there is so much to see but after a few hours of wandering around Lynnie has had enough so we head back to the car.  We have only covered three and a half miles, but the dogs have gone much further.  I am confident  we will  return before too long. 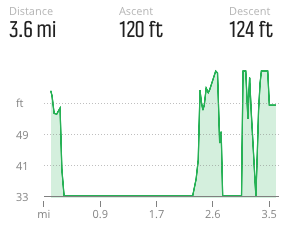