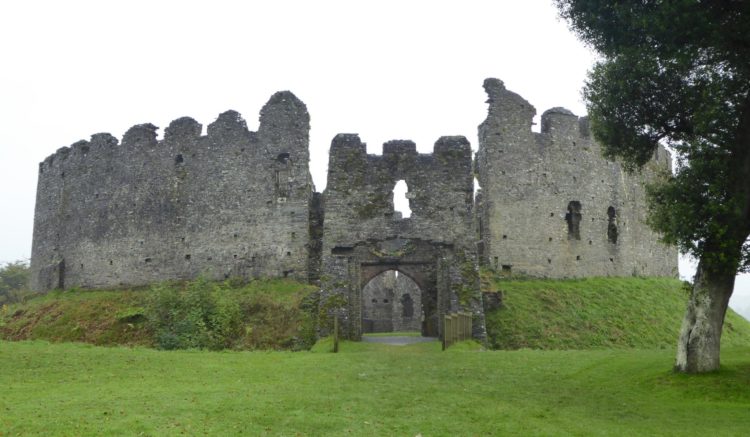 Today Lynnie is taking a trip around Lanhydrock House whilst I head out with the boys.  The weather does not look too good so I think she may have made a wise choice.

We start the walk together from the National Trust car park and as a precaution I don my waterproofs, within minutes this proves to be a good decision because by the time we have crossed the car park it is drizzling.  Together we head down the driveway to the main entrance to the house.  At the impressive gatehouse we part ways and I follow the drive besides the wall until I reach a gate with path way-markers. 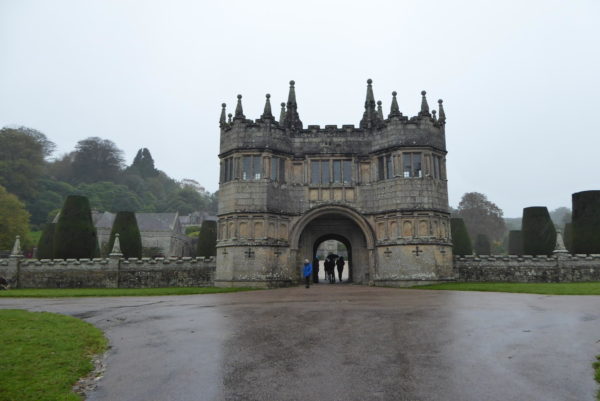 The path leads me south-easterly through Great Wood to reach a minor road that I cross to continue through another smaller section of woodland.  Soon after the path crosses a stream I go through a gate into a field of pasture.  Then another gate leads to a broad path through a reed crop.  Whilst under the cover of the trees I was not too bothered by the drizzle but it has now set in and I am glad of my waterproof gear. 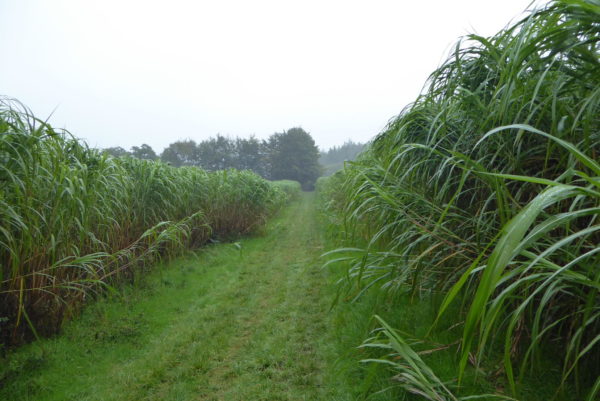 I reach a tarmac lane and continue along this past the water treatment works.  It is easy going on this track and after a couple of miles I pass through the converted farm buildings of Restormel Manor and then take a tarmac drive leading to Restormel Castle.

One of the joys of travelling is discovering things on a walk that you were not expecting.  A few days ago it was the magnificent Helman Tor, today it is the stunning Restormel Castle.  Arriving at the entrance I am invited to enter the shop with the dogs.  I decline knowing full well that if they were to step inside they would immediately shake and redesign the interior in a muddy polka dot style.

Up until now I have not really had a view of the Castle but as I walk from the entrance kiosk I realise I have chanced on a real beauty. 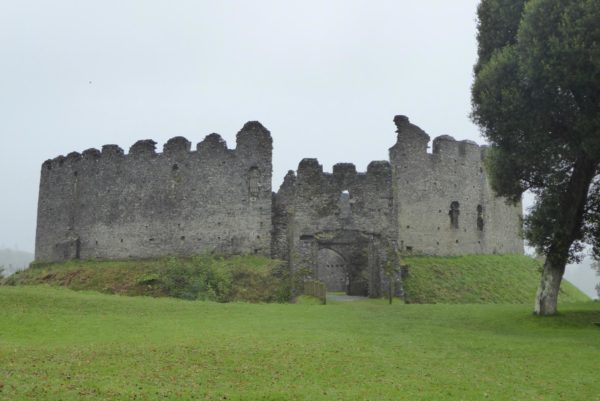 The castle is believed to have been built between 1192 and 1225 replacing a motte and bailey castle on the same site.  Apparently it is the best-preserved castle of its type, a circular shell keep, in the whole of the Country.

I am fortunate to have the whole place to myself, probably due to the persistent rain, and wander around climbing the steps to get some stunning views of the interior. 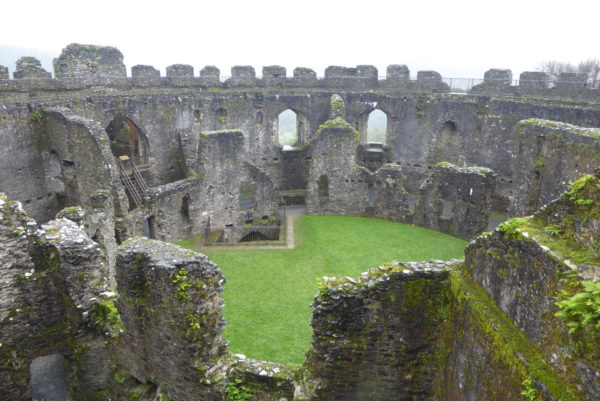 Like most castles it has changed hands a few times, in 1270 it was granted to Henry III’s brother, Richard of Cornwall.  He died the following year and his son Edmund took on the castle as his base.  When Edmund died in 1299 the castle reverted to the Crown and by 1337 was in disrepair.

During the Civil War it saw it’s only military action when the crumbling ruins were used as a parliamentary garrison and stormed by royalists led by Sir Richard Grenville.  Thereafter it remained as a ruin.  In 1925 the Duke of Cornwall, later to become Kind Edward VIII entrusted the ruin to Office of Works and English Heritage now maintain it. 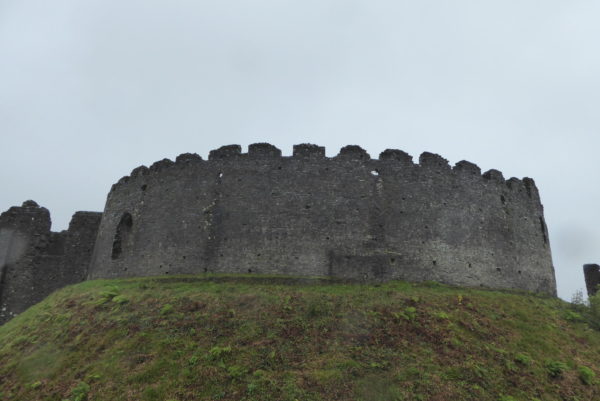 Resuming my walk I return down the tarmac drive, on reaching the road I turn right and then very soon left to take a footpath heading towards Restormel Manor before entering farmland to skirt the garden of the Manor. 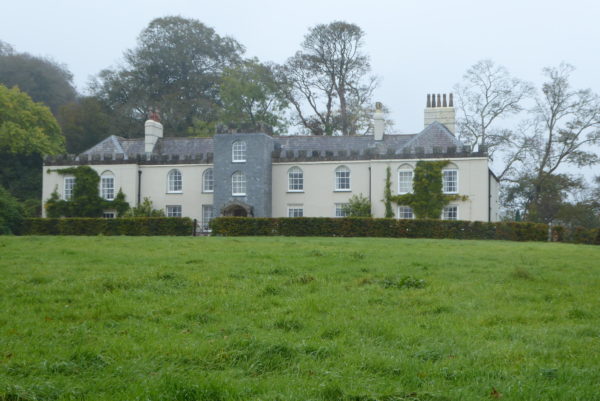 The Manor forms part of the Duchy of Cornwall estate and is said to be popular with the Price of Wales and members of his family.  It is also available to hire.  Later I take a quick look at the charges on their website and decide not to suggest to Lynnie that we arrange a stay.

The River Fowey flows close to the Manor and the path I am following joins a track that leads to a bridge over the river and then crosses the railway line before climbing uphill to join a minor road. I turn left and soon pass the Duchy of Cornwall nursery.  My route is now on minor roads for the next three and a half miles.

After passing the nursery I continue to a junction, I turn left and then within a hundred yards turn right on a road signposted to Cardinham.  After a mile I reach a cross roads and turn left on the road signposted to Bodmin and I keep on this road for almost two miles until I reach Respryn Bridge. 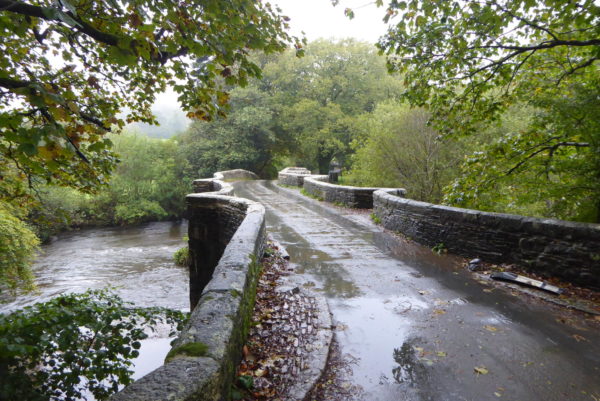 This five-arched bridge dating from around 1500 spans the River Fowey and replaced an earlier bridge built around 1300.  This bridge is said to have played a part in the civil war, the Boconnoc estate on the east side of the river was in the hands of the Royalists, whereas Lanhydrock estate on the west side was in the hands of the Parliamentarians.  In 1664 King Charles I crossed the bridge on his way from Boconnoc to Lanhydrock.  I now cross the bridge in the same direction and apart from recording the fact for posterity in this blog I am sure it will not get another mention.

On the opposite side I turn right to walk through a car park and then take a soggy footpath along the bank of the fast flowing River Fowey. 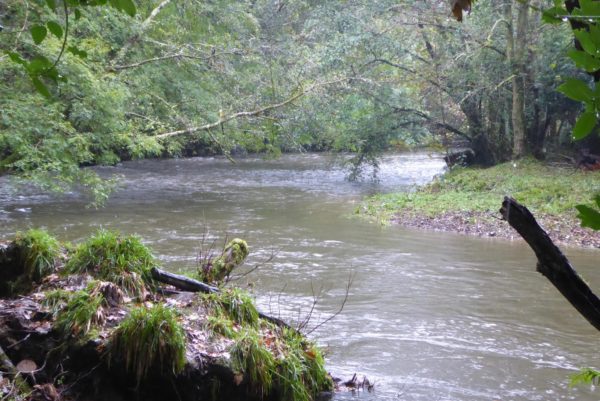 This route soon reaches a junction of paths and I turn left, quickly crossing a track and minor road.  I carry straight on through Hart Wood and then Costislost Plantation to reach another minor road.  Here I take a path through Lodge Plantation and back to the car park at Lanhydrock House.

My walk has covered just over nine miles and because of my visit to Restormel Castle I have been out for almost four hours.  It has rained steadily the entire time and the dogs are absolutely soaking.  We are in for a smelly night in the caravan!  But despite the poor weather it has been an interesting wander and one I am likely to repeat in the future as I am sure Lynnie will want to visit Restormel Castle. 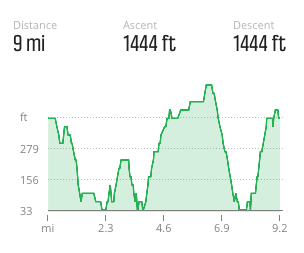