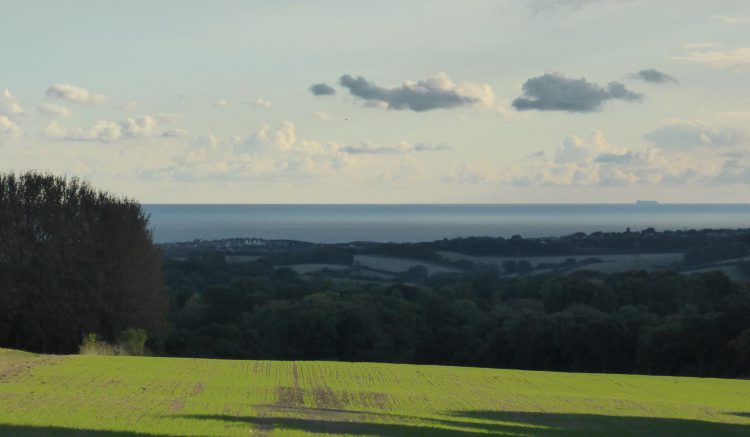 We have almost reached the end of our three week tour of East Sussex and Kent so before heading off for today’s walk we take the awning down, then if tomorrow morning brings another heavy dew we won’t have to wait for the sun to dry it out.

A few days ago we walked from the site going north of Battle, today we are heading to the east and south. Leaving the site we turn right down the lane and head towards Coursebarn Farm. By the pond we keep right and follow the path as it heads downhill towards the sewage farm.

On reaching the sewage farm we turn left at a crossing of paths, this leads us through a wooded track and then across a field to reach Marley Lane. Here we turn left and follow the road for about one hundred yards before turning right going through a car park either side of a track on the edge of Great Wood.

Following the track we enter the woods, as the name suggests Great Wood is a good size, it covers 186 hectares, which is large. I always struggle to imagine what a hectare looks like, I can visualise an acre but its metric cousin is more challenging. There are approximately 2.47 acres in a hectare meaning an acre is about 40% of the size of a hectare. By my calculations the Great Wood covers about 460 acres, that is a lot of trees. 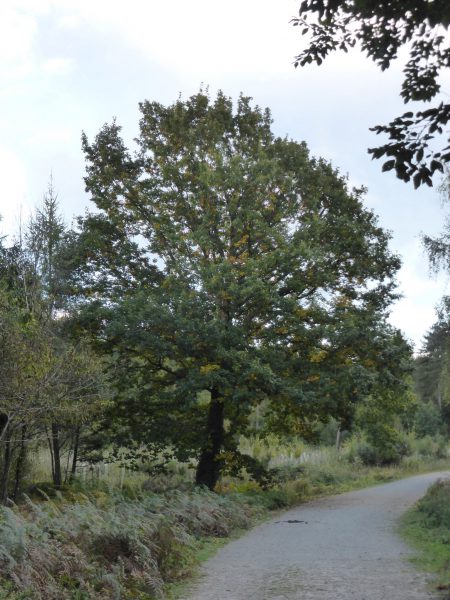 There is an extensive network of tracks for folk to wander around in the woods, but we follow a footpath on the right to a crossing of paths where we turn left along the 1066 Country Walk. We follow this through the trees until we reach the edge of Sedlescombe Golf Club. The path is clearly marked across a couple of fairways and then heads towards Norton’s Farm. Here we turn right, leaving the 1066 Country Path, and follow a footpath taking us alongside more of the golf course before going through a gate into a field. 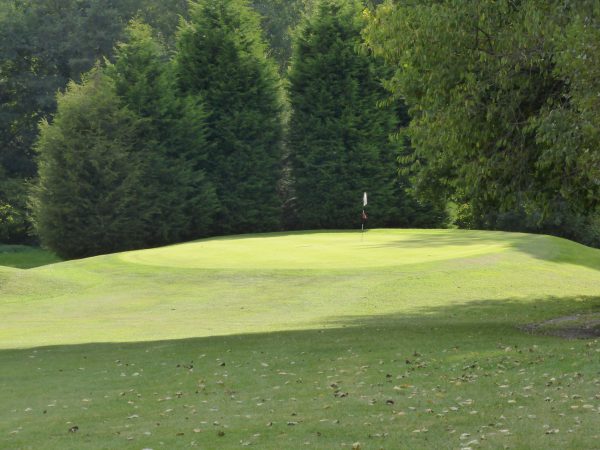 The gate has a helpful sign warning of the presence of a “Bull in Field”, we are not keen on bears and are particularly wary of bull bears. Being a country boy I look for evidence of bears and see no deposits in the field but we proceed with caution. Reaching a gate at the top it is clear there is not a bear of any description in the field, but helpfully this gate is also adorned with a warning sign of “Bull in Field”. I find this approach by farmers a bit irritating, what’s the point of the sign? It is either intended to deter walkers, or is just lazy. 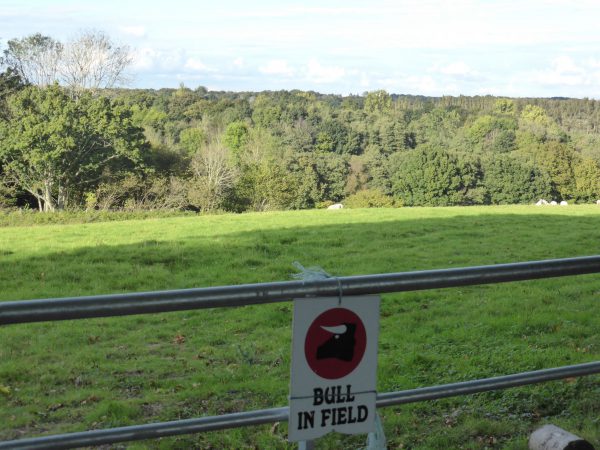 Chuntering on about the inappropriate use of signs we follow the footpath along a track which leads us to the A2100, we turn right and walk alongside the road with the barn like Church of Ascension on the opposite side of the road. This place of worship was built in 1876 reportedly on land where William the Conqueror mustered his troops before going into battle in 1066. 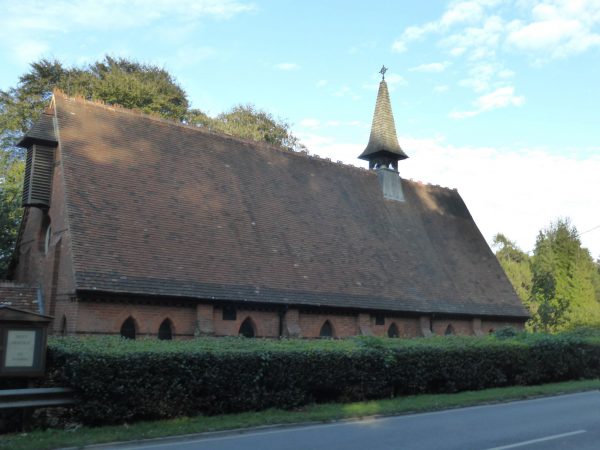 On reaching a junction with a minor road we turn left and soon left again to follow a footpath along a track, passing a sports ground on the left, we then leave the track to take a footpath on the left that heads across fields with Crowhurst Park caravan site in front of us. The path skirts Crowhurst Park before heading south with woodland on our right and then crosses open fields with views of the sea at Bexhill in front of us. 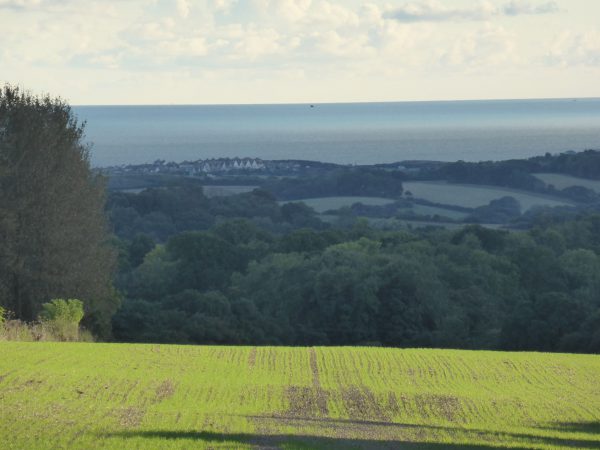 At a crossing of paths we turn right and follow the path as it heads under the railway line and then carries on to Crowhurst. On reaching the village we head towards St George’s church and then turn right up a lane. 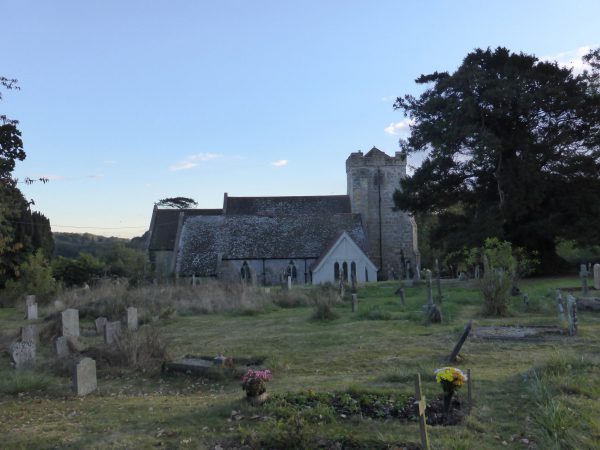 As the road bends to the right the footpath carries on through a field of sweetcorn, which towers above us. 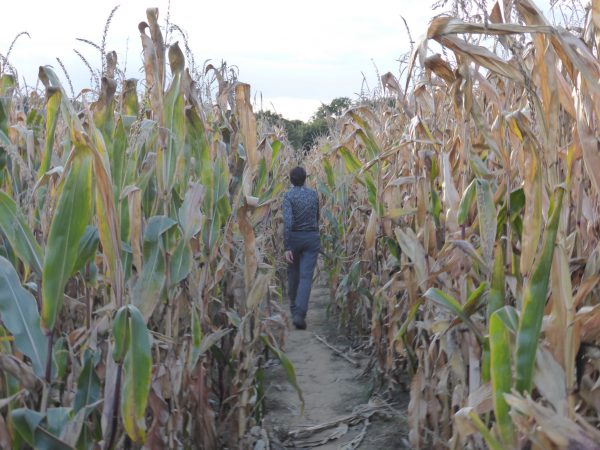 After a little woodland we cross a field of bears, they are neither bothered by the dogs or us and we walk through the midst of them.   After crossing a stile we enter Fore Wood Nature Reserve and keep on the well-defined path. Once again this is the 1066 Country Walk and at a junction we follow the 1066 way markers towards the interestingly named Peppering Eye Farm. 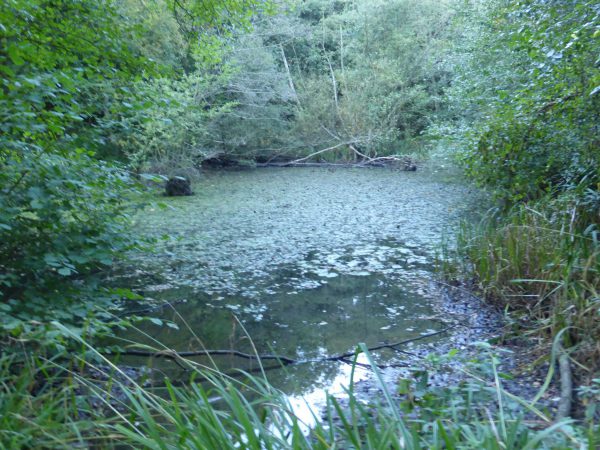 The track eventually leads to a minor road where we turn left and on joining Powdermill Lane take the 1066 footpath almost directly opposite, for a short while this runs parallel to the road before entering fields. The path is clear to follow and we head towards Battle. Along the way passing a herd of bears that watch us carefully as they munch haylage from a feeder.

Back in Battle we take the now familiar route back to our site. Our walk has covered over nine miles and has been very enjoyable. Tomorrow we are heading back home, but hopefully it will not be too long before we resume our travels.