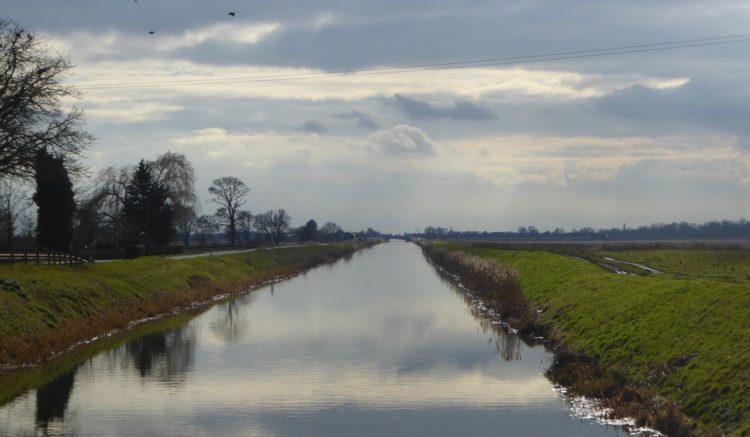 I am walking on my own again today.   Lynnie has decided to visit Ely Cathedral and the stained glass museum, so after dropping her in Ely I drive to the village of Wimblington from where I plan to start my walk.

Parking close to the village hall I head off along Addison Road into the centre of the village. On reaching Norfolk Road I turn left and walk past the Post Office and the Anchor Inn pub.  As the road continues it swings to the right and turns into King Street leading to the busy A141, which I cross to join Eastwood End and then follow this into Hook Road.  Now I am in open countryside with fields to either side.  To my left I can see large grain silos. 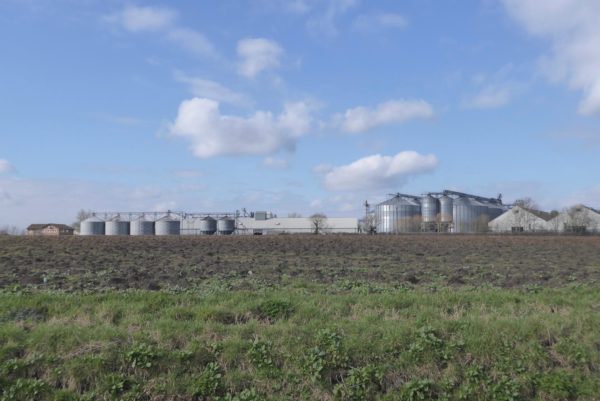 Hook Road takes a right angle bend to the right as it reaches a nursery.  I stay on this road until it turns at right angles to the left; but I take the track going straight on besides Latchesfen Drain to pass the Latchesfen Pumping Station. 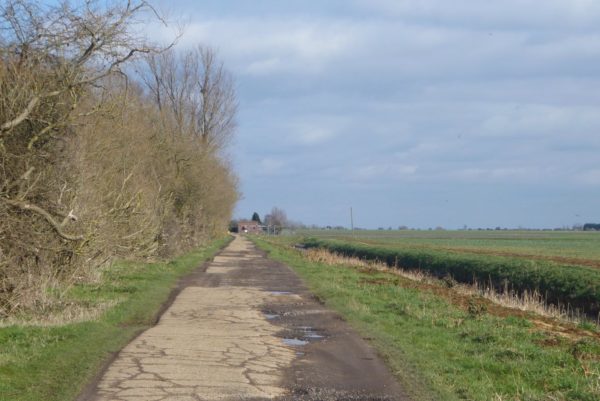 Soon after the pumping station the footpath crosses a field and then crosses the Latchesfen Drain heading towards Stonea Camp. 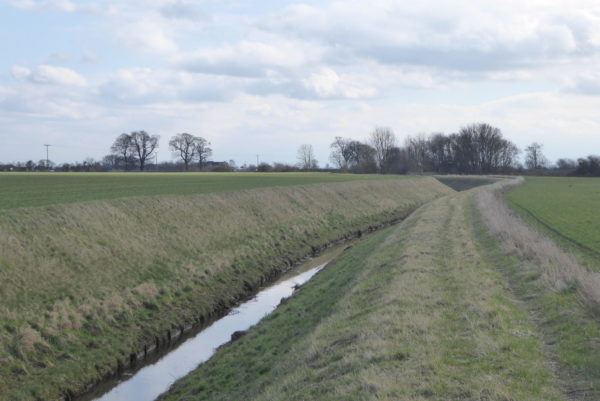 After going through a gate I am in the grounds of Stonea Camp.  This is an impressive site.  According to the website dedicated to this Camp, an Iron Age fort developed on the site around the 3rd or 2nd centuries BC.  Reportedly at just over six feet above sea level this is the lowest hill fort in Britain. 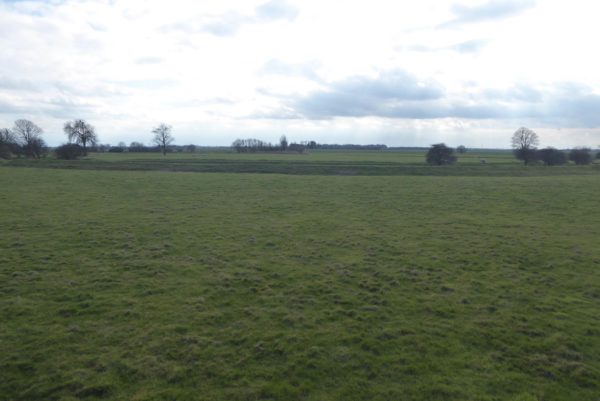 An information board  states that when Emperor Hadrian visited Britain in 122 AD he was keen on developing Stonea Camp and it is the only Roman town found within the Fens. 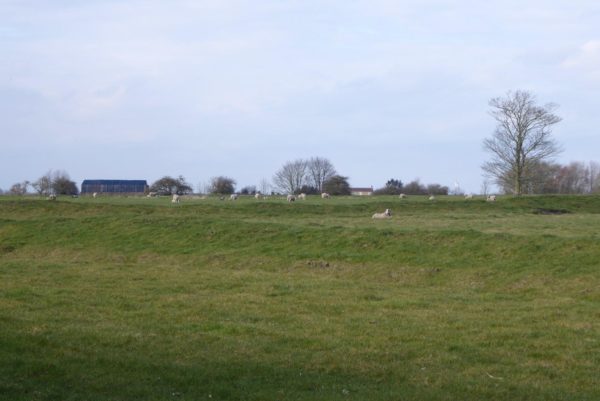 Another information board explains that after the decline of the Roman town, Stonea continued to be an important centre;  Anglo-Saxon halls dating to the 6th and 7th centuries have been discovered. 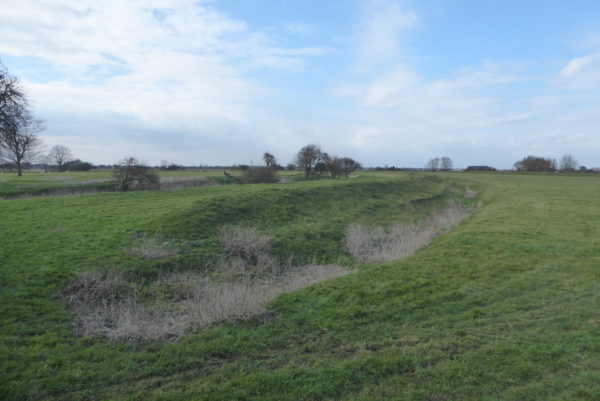 It is an interesting place to wander around and there are newly born spring lambs providing an indication that better weather should be arriving soon. 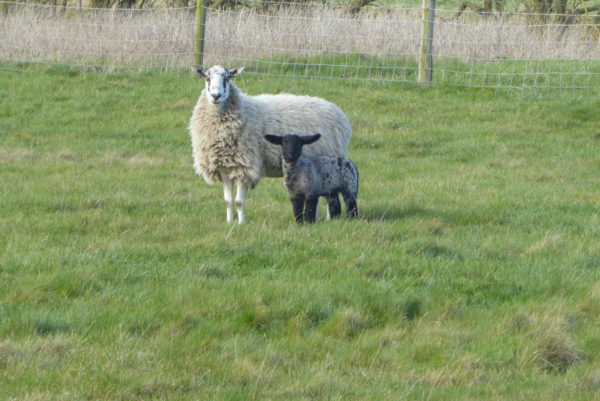 I leave the camp through a gate by the small car park and take the track heading south towards Stitches Farm.  After a few hundred yards I follow a footpath on the left heading to Bridge Farm.  After passing the farm I cross the drainage ditch and turn right to walk besides the road on the wide verge. 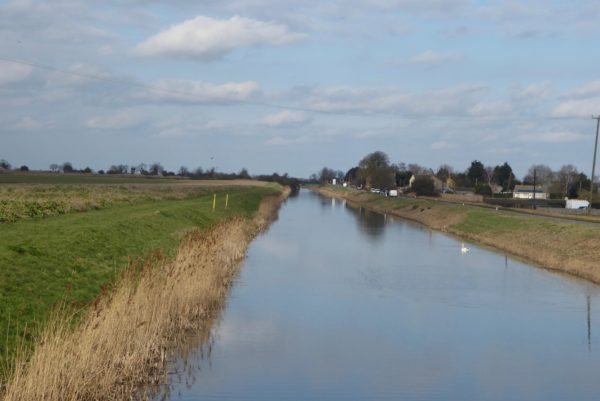 I continue besides the B1098 for the best part of three miles.  The traffic is infrequent and the majority of those passing are considerate and give me a wide berth.  Occasionally I bump into a group of fishermen hoping for a bite.  On the way I pass Boot’s Bridge. 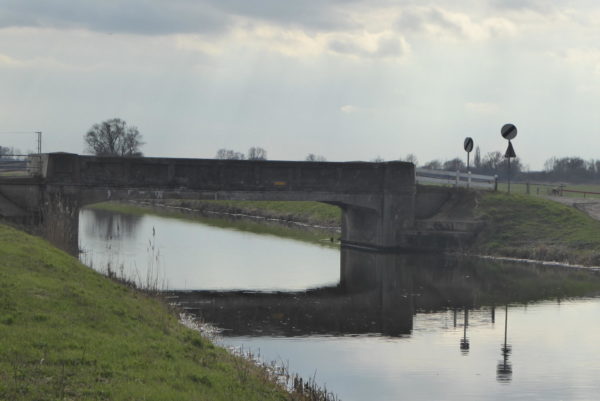 Just after the bridge are signs of sluice gates, I am not sure if these are still in operation. 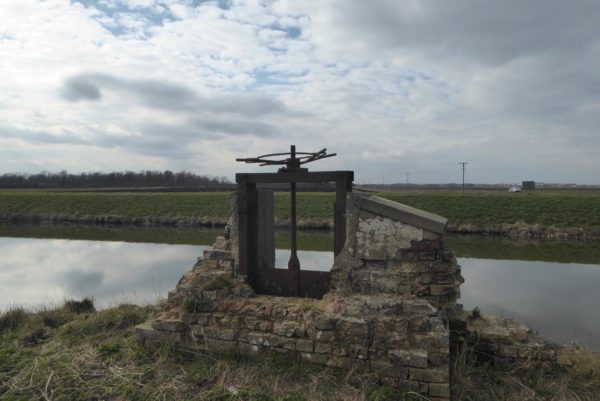 Further on, shortly before reaching the turn for Mount Pleasant Farm, I take a brief detour along a track on my left to bag my forty-seventh OS trig point at Honey Hill.  This one, at sixteen feet above sea level has now taken the record for being the lowest trig point I have visited. 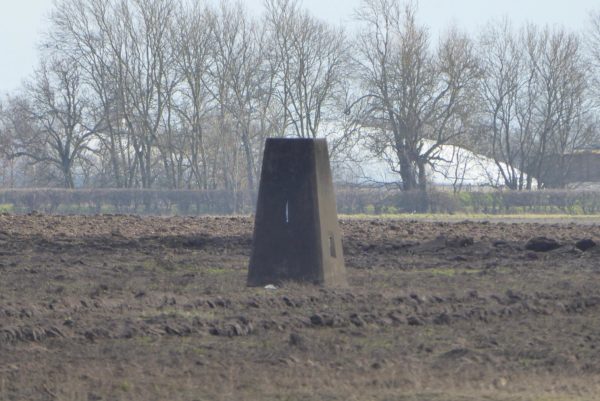 Returning back to the road I turn left and then very soon turn right to cross the ditch and walk past Mount Pleasant Farm and then continue on the footpath as it follows the track besides drainage ditches. 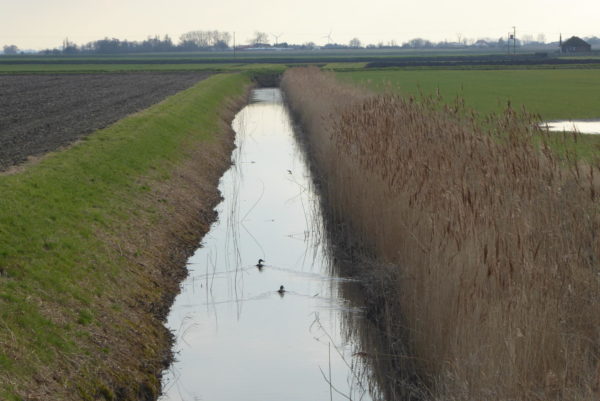 After passing Bottom Farm, with the Parachute and Microlight centre behind the main farm buildings, I continue alongside the track.  The sun has come out and for the first time since arriving here and I appreciate why people talk about the big skies in these parts. 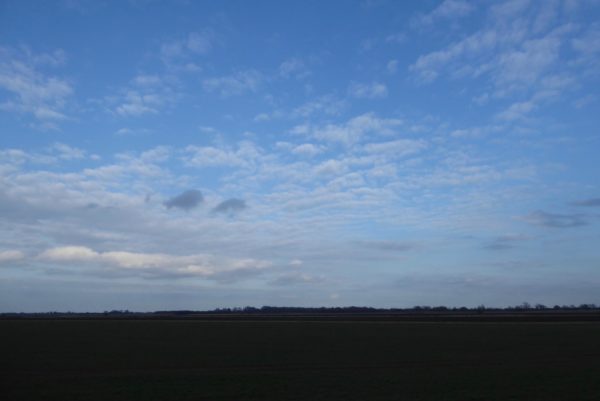 On reaching a minor road, Block Fen Drove, I turn left and follow this back towards Wimblington.  Then at the junction with the B1093 I turn left again and soon cross the busy A141 to enter the village by St Peters Church. 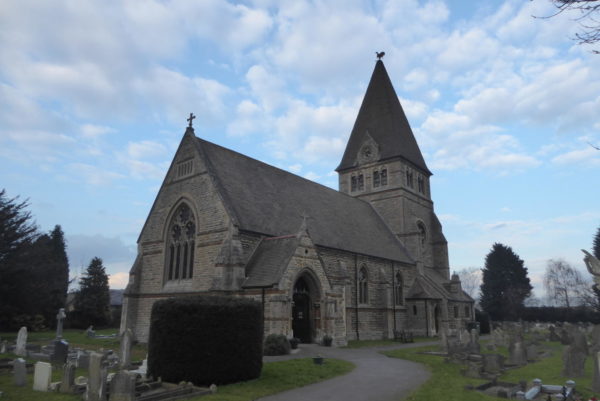 In the graveyard stands a war memorial with an interesting story.  During World War I a village farm worker, Percy Cox, was presumed dead and his name was added to the memorial.  However, in the 1940’s Percy turned up leading to a debate that eventually resulted in his name being removed. 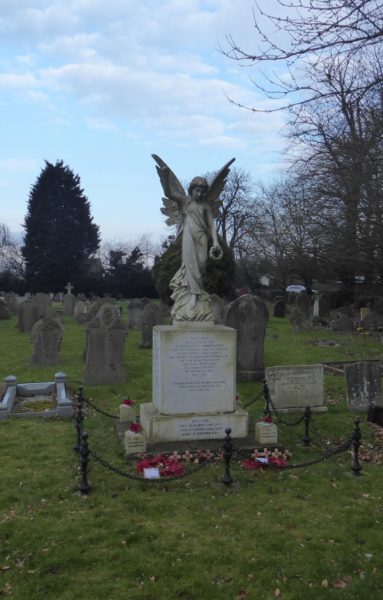 Reading the story I discover that during World War I Percy and a couple of his colleagues assumed the identity and uniforms of Australian Service men.  Percy became Ernest Durham.  The motivation for this was financial, at the time British Troops were paid one shilling per week, whereas Australian servicemen received more than eight, Ernest Durham received eleven shillings per week.

Under the name of Durham he fought through the war and was demobbed to Australia.  For some reason he decided to return to the UK In 1925 and set up home in Sawston is South Cambridgeshire.  Then even more strangely fifteen years later in the 1940’s he decided to return to Wimblington and reveal his true identity.  Pictures were published in a local newspaper of him with his brother pointing at his name on the memorial.

Percy then went back to Sawston to resume life as Ernest Durham, but in 1952 he employed a cleaner who found out his true identity and started to blackmail him.  Confronting her he chased her from his house with a shotgun, firing at her before turning the gun on himself.  Percy’s name has now been removed from the War Memorial.

Leaving the church I wander through the village back to the car.  I have been out for more than three hours and covered over ten miles.  It is another of those days when I return to the car having found out more than I knew when I started, it has been another very interesting afternoon in what at the outset looked like just another walk across flat land!

In the evening we decide to wander up to The Plough pub at the other end of Little Downham.  As I suspected this is a cracking village pub serving good value Thai food.  The beer, Butcombe Rare Breed, is exceptionally well kept and chatting to the Landlord we learn more about this interesting area.