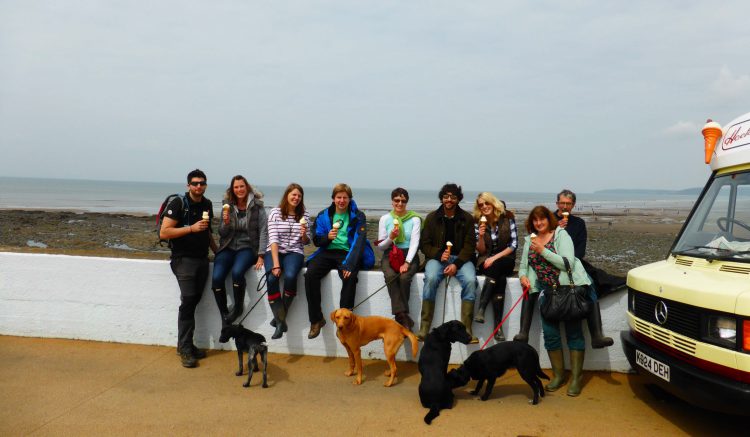 As a teenager Lynnie’s mum, Miki, moved from South Wales to Bideford. She met Lyn’s father Tim here and always talked fondly of her time in the area particularly of Westwood Ho!, this is the first time we have visited the area since Miki passed away last December.

Westward Ho! is an interesting place the village gets its name from Charles Kingsley’s 1855 best selling novel Westward Ho! set near Bideford. The Northam Burrows Hotel and Villas Building Company saw an opportunity to exploit the books popularity and they built a hotel close to Northam Burrows calling it Westward Ho! Hotel, then as other properties were developed in the area the village acquired the name.

As every quiz goer knows Westward Ho! is also the only place in the British Isles to have an exclamation mark in its name.

This weekend Lyn’s brother John and his family are staying in a cottage just outside Westwood Ho! so we meet up with them to go for a walk around Miki’s favourite area. We are a large walking party of ten, John and wife Mary, their adult children Luke, with partner Emma, Hannah with partner Adam and Charlotte and her husband Rew. Plus the four dogs, Crosby is initially uncertain of Charlotte and Rew’s pointer puppy Dora, whilst Dexter and Tally ignore them both, after a short while they are settled into the pack

Setting off from the Pig on the Hill pub at Pusehill we follow the lane and then footpath to Kipling Tors, as the name implies this is named after Rudyard Kipling. From January 1878 he was educated at the United Services College at Westwood Ho!, a school founded to prepare boys for the British Army.

The views from this point are extensive, the tide is out and directly below us is a rocky outcrop, in the middle distance is Westwood Ho! beach and further on are Braunton Burrows and Saunton Sands. From our position it looks like the beaches of Westwood Ho! and Saunton Sands are one, as the Taw and Torridge estuary is obscured from view.

We walk down to the sea front and as anticipated there is a Hocking’s ice cream van. In honour of Granny Mik it’s ice creams all round. I am not that bothered about ice cream but I do like a Hocking’s cone. According to their literature Hocking’s Dairy Ice Cream is produced using a family recipe that has been used for generations. The business started in 1936 by Dave Hocking with one van and over the years has expanded to twelve, but still very much a family business now run by the founders grandsons and great grandson. Hocking’s Ice Cream is only sold from their own vans at Westwood Ho! seafront, Bideford Quay, Appledore Quay, Torrington Commons and Ifracombe Seafront. If you see one make sure you stop, you will not be disappointed!

Whilst Charlotte and Rew take Dora back for a rest the remaining party continue on towards the beach, initially behind the shingle bank and then on the beach. Tally, Dexter and Crosby have a good run around. Then Crosby starts to hunt for seafood, so on the lead he goes. Meanwhile Dexter sees a Collie chasing a ball and promptly runs off to steal it!

Luke and Adam scour the rock pools, then Adam spots driftwood and off he goes like a Springer after a rabbit to find the right piece for the house that he and Hannah have just purchased. Off the beach we are now by the side of the Royal North Devon Golf Club, a challenging course especially on a windy day, another to add to my list.

We return to the cottage for lunch and a relaxing afternoon before an evening BBQ, a very enjoyable day.

As we drive back to the Unicorn Lyn suggests that tomorrow we walk to Bideford and Appledore, a walk I had proposed a few day ago but was deemed too far. After a few seconds I realise that on Lynnie’s proposed route there will be a minimum of four Hocking’s Ice Cream vans!