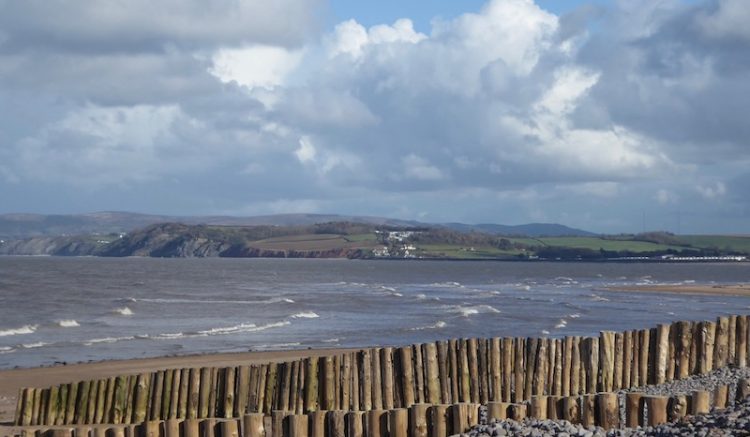 I was slow to join the ranks of social media followers, only joining Twitter in the summer of 2017 and Facebook a bit earlier.  One of the things that had put me off was all the negative publicity and I couldn’t see what could be gained from tweeting or posting.

My guru when it comes to all things related to information technology is my Web Wizard Andy, I just write the blogs and take the pictures and post them onto the platform he has developed.  After much persuasion from Andy I signed up to both of these popular social media platforms.  Surprisingly I now have a lot of people follow me on Twitter and I also follow many interesting like-minded people.

One of those I have been following for a while is Beth, from Beth Foot Forward.  I started following her when she was planning her walk around the coastline of mainland Britain and have kept a close eye on her progress.  After bumping into Dan, from Dan Walks the Coast, a few days ago and him recounting how he’d walked with Beth a few days earlier I got in touch with her and we arranged to walk today.

I am due to meet up with Beth in Dunster, rather than drive I have decided to walk from the Caravan and Motorhome club site in Minehead.

From the site I turn left and walk uphill besides the A39, Hopcott Road.  On reaching the Hopcott I turn left to follow the narrow tarmac lane as it heads steadily uphill passing Higher Hopcott. 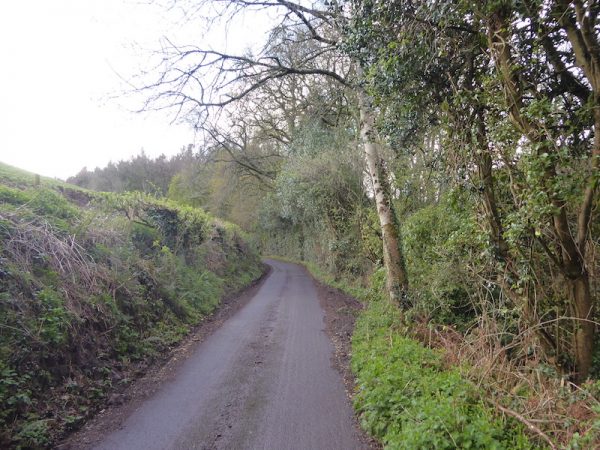 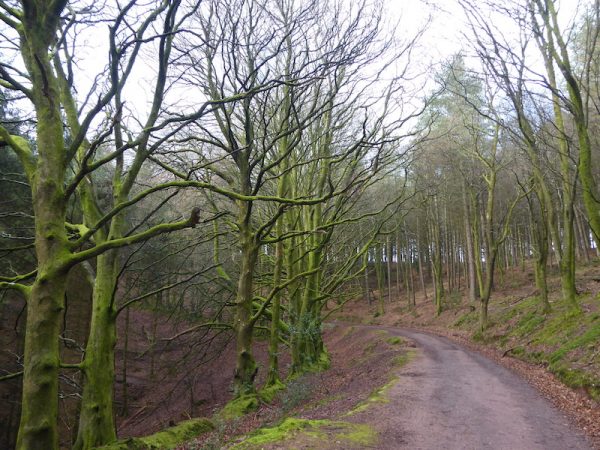 The route emerges from the trees and carries on to a crossing of paths; here I turn left and follow the broad track on the public bridleway signposted to Dunster. 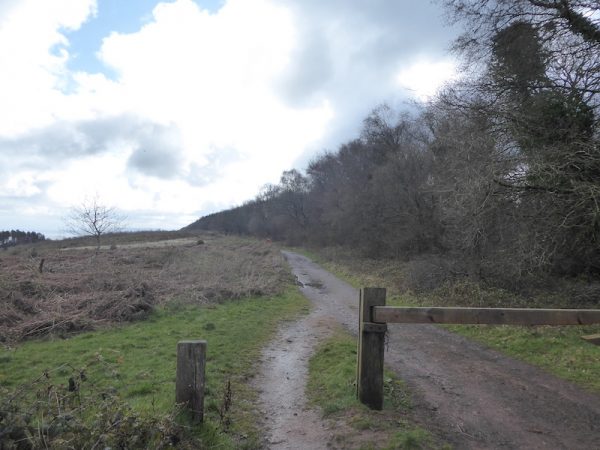 At Hole’s Corner I continue straight along the track on the route of the Macmillan Way. 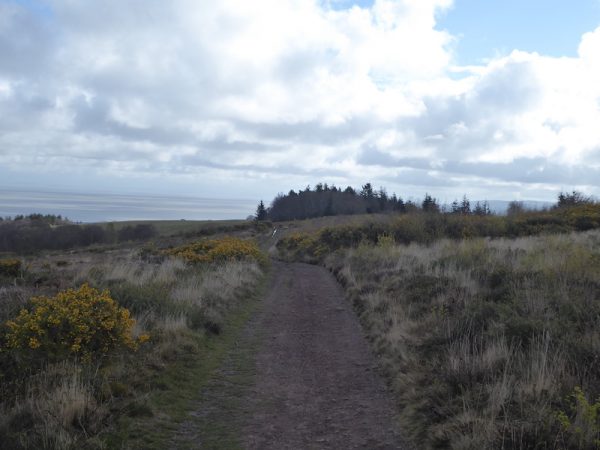 At Grabbist Hill I take a path on the left signposted to Dunster – avoiding a steep path.  At the next junction of paths I continue straight on ignoring a path to my right, signposted to Dunster.  The track descends steadily downhill and then at a junction of paths close to St Leonards Well I turn right.  I had planned to look at the ancient well but I am running a bit behind schedule so press on to join a watery lane heading downhill towards Dunster. 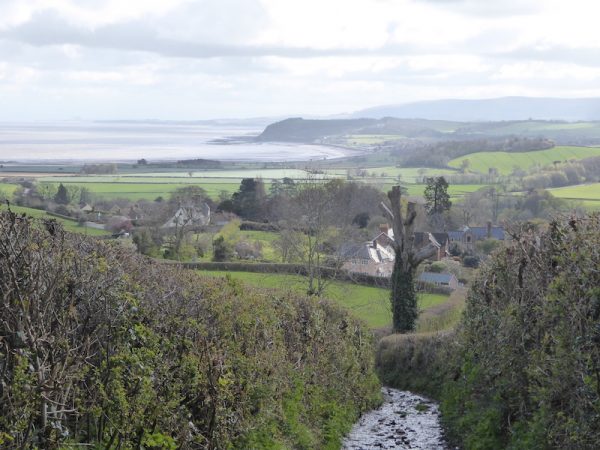 On reaching a minor road I turn left and then within a few yards turn right at the Butter Cross.  This trading post dates from the late 14thcentury and once stood in the High Street in Dunster.  It was the centre for a market that traded local produce.  It was originally taller and although the exact date of moving to this site is not known it is thought to have been in the late 1700’s or early 1800’s. 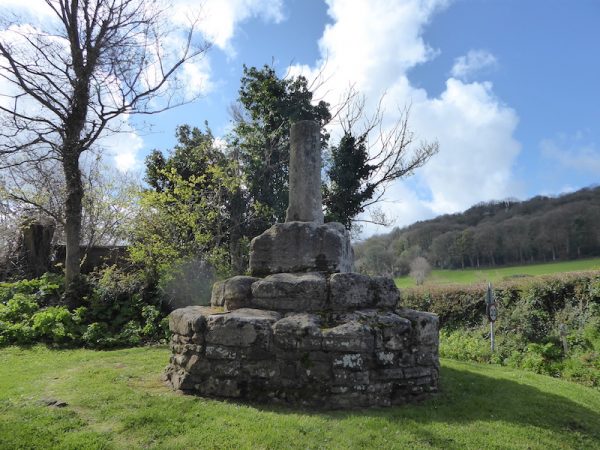 I follow the path passing a community orchard.  These local community initiatives are great ideas, not only growing produce, but also providing a community hub thereby tackling the issues related to social isolation. 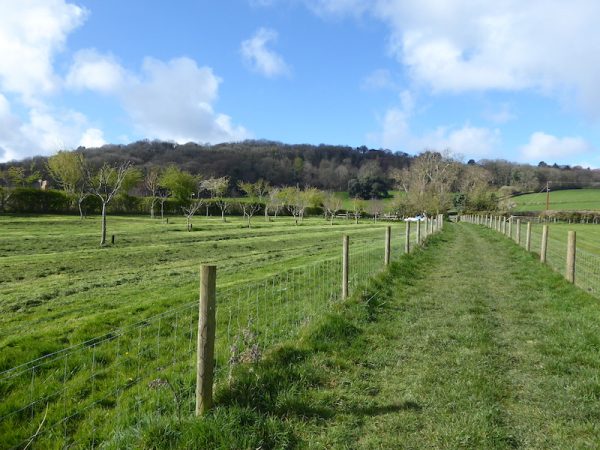 I enter Dunster near the Yarn Market and meet up with Beth to continue our walk.  After our initial greetings we head off down the High Street of Dunster and then skirt around the edge of the Castle to turn into Mill Lane.

At a footpath sign we turn right to Gallox Bridge, this grade 1 listed medieval packhorse bridge crosses the River Avill and was at one time the main route into Dunster from the south.  Its name derived from its proximity to the village gallows, which stood on nearby Gallox Hill. 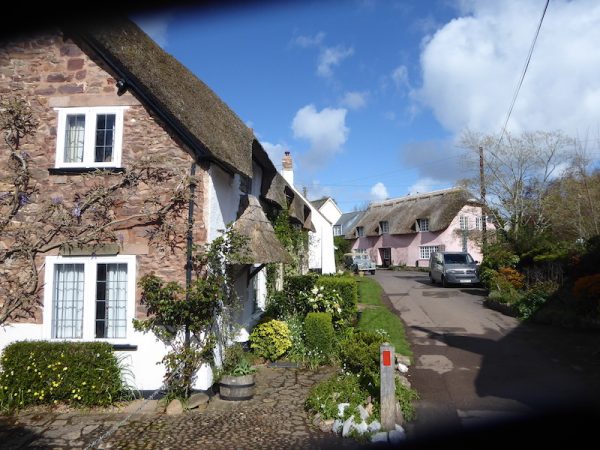 We cross the bridge and head towards the woods in front of us and then at a junction of paths we turn left to follow a footpath through the Deer Park.  For many years I have walked on my own or with Lynnie and I  rarely walked with anyone else.

Recently I have started going walking at least once a month with others and have found this to be a very social way of wandering around. There is always the point when you fall into a pace that suits everyone.  Today walking with Beth I let her dictate the speed, she is carrying a heavy back pack and has been on the trail for a long time, she tells me she fell a few days ago which has slowed her up a bit. 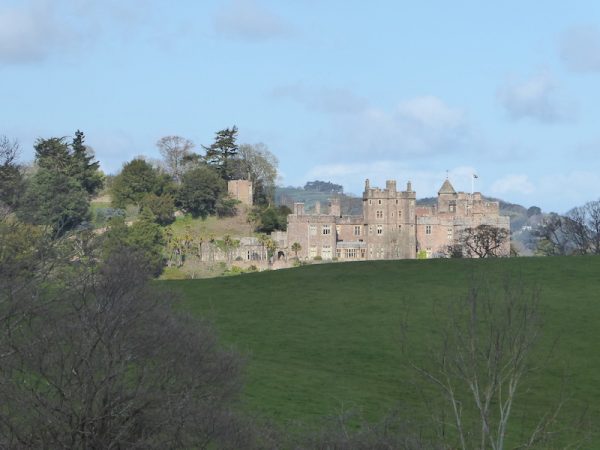 The route through the Deer Park is straightforward and Beth tells me about the motivation behind her mammoth walk and her reasons for raising funds for the RNLI, Lowland Rescue and Mountain Rescue.

On reaching Carhampton Gate we join a track leading down into the village of Carhampton where we turn left down the High Street to reach the A39.  Here we turn right and cross the road to continue along the pavement towards the church of St John the Baptist.

Just before reaching the Church we turn down a lane running to the left of the church.  Continuing down the lane we turn right at a footpath sign to walk along a field edge path. We stay on the footpath across a stream.  On the far side of the stream we cross a field to reach the West Somerset Railway line, which we cross with care heeding the sign to “Stop, Look and Listen”. 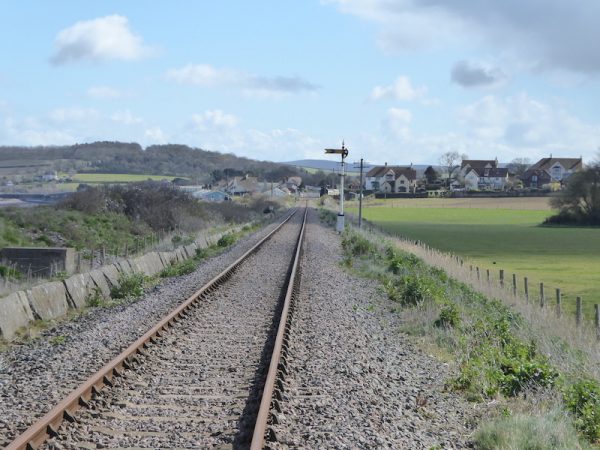 On the far side of the track we turn right on the footpath heading towards Blue Anchor.  The sky ahead of us is clear, but that is not where the weather is coming from. Behind us clouds are building up. 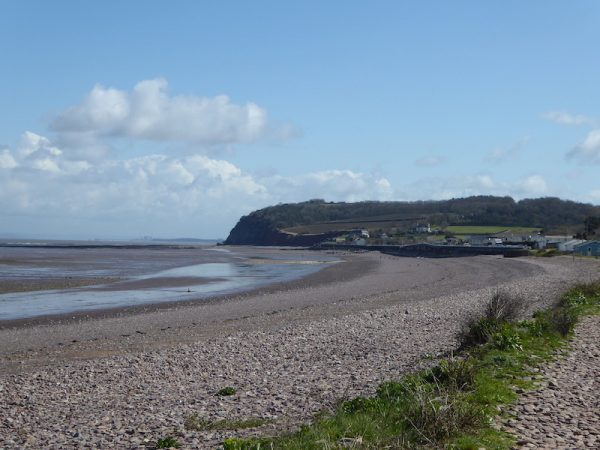 On reaching the promenade in Blue Anchor we stop at the busy Driftwood Café for a cup of tea and share tales about our walking experiences. We are both tackling a serious walking challenge but I have the luxury of deciding when I go out and have the option to choose the distance I walk each day, whereas Beth has to do a lot more planning and is carrying far more kit than I would venture out with.

We resume our walk by heading along Blue Anchor seafront on the pavement above the high sea defence wall. 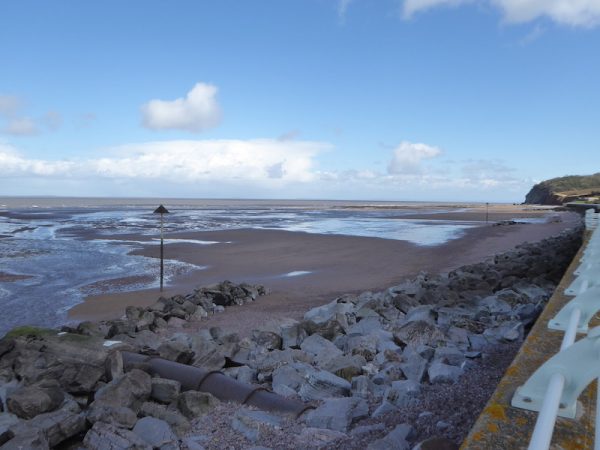 Blue Anchor is an interesting place. Apparently this seaside village was originally known as Cleeve Bay but became known by the name of the 17thcentury Inn that stands to the west of the village.  Unfortunately the inn is now closed, a notice on the building blames the closure on a lack of action by the Council to prevent further coastal erosion after a major recent landslip.

In this area of woodland there are numerous tracks made by local walkers in addition to the footpath. We opt for the most well worn route and follow this in the general direction of the coast.  As we head through the trees the rain that has been threatening arrives and it looks to be set in for a while so we stop and kit ourselves out in our waterproofs.  I am not a fan of walking in over-trousers, but there are times it makes sense. There is no enjoyment walking whilst getting soaking wet. 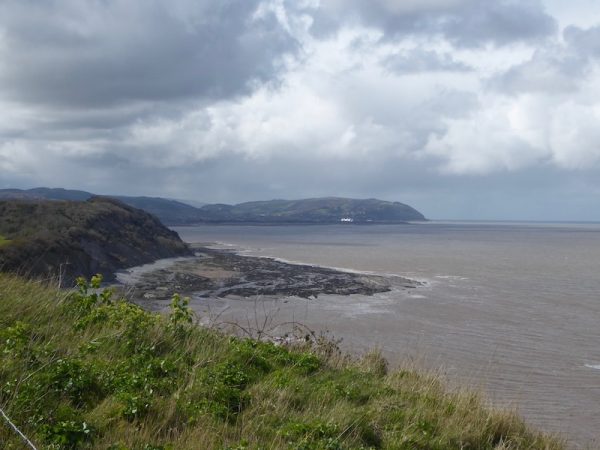 We end up back on the coastal path and turn right towards Watchet.  The path heads through trees before reaching open farmland on our right and good views of the Quantock Hills in front of us.

After passing a caravan park at Warren Bay we head uphill to reach open land and follow the footpath leading to Daws Castle.   This was originally an Iron Age Hillfort and then around 878AD was fortified by King Alfred as a defence from Viking invaders. The English Heritage information board states there was once a mint here.

After passing the castle we join the road and wander down into Watchet heading to the harbour. 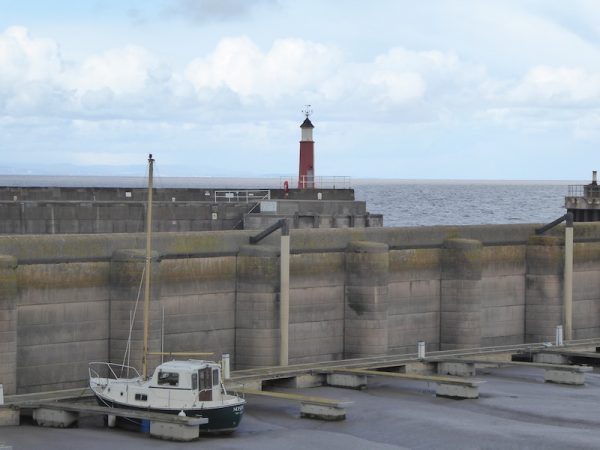 It is at this point that our ways part, Beth has to head off and locate her accommodation for the night and I have to walk back to Dunster.  I have really enjoyed walking with Beth, her tale is very inspirational and I will continue to follow her progress around the coastline with interest. 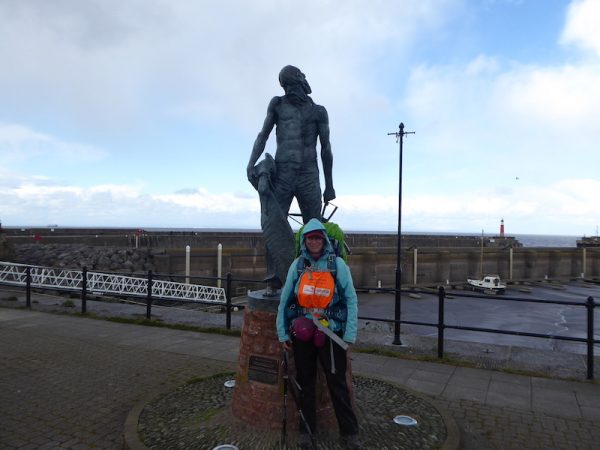 My route is now very straightforward as I retrace my steps.  Thankfully the rain has eased and I can dispense with my waterproofs.  This aids my walking and I am able to set off at a reasonable pace. 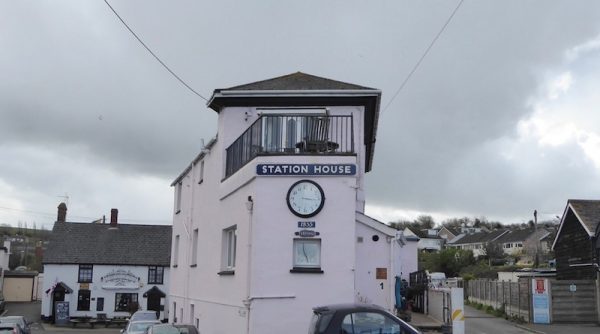 When I reach the promenade at Blue Anchor the sun is out and the sky ahead looks clear. 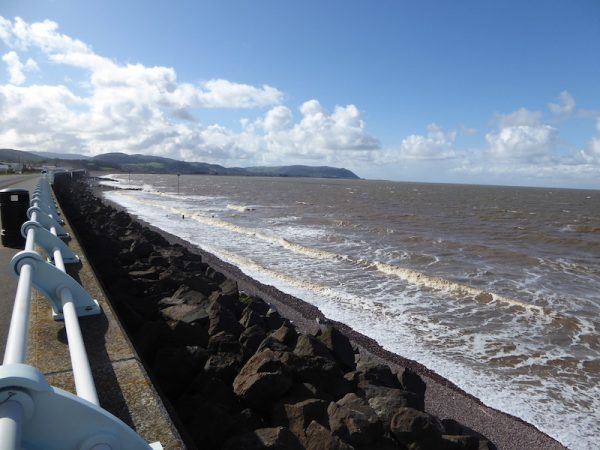 As I go through the holiday chalets on Dunster Beach the head wind is starting to pick up and despite the sunshine the temperature has dropped a few degrees. 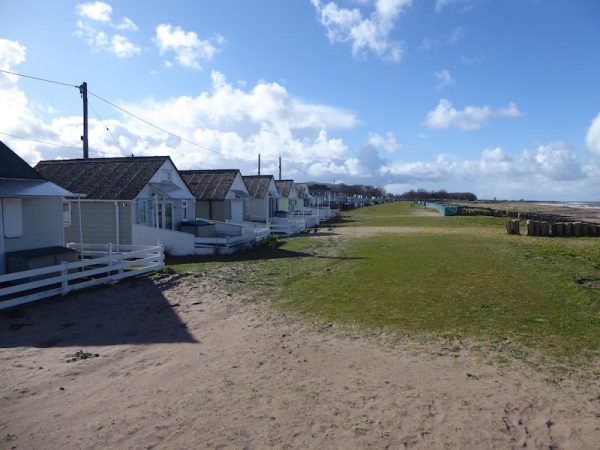 When I reach the eastern end of Minehead golf course I am fully exposed to the wind, there are two major challenges, first walking into such a strong wind slows me down considerably, the second and more annoying is the sand blowing into my eyes. 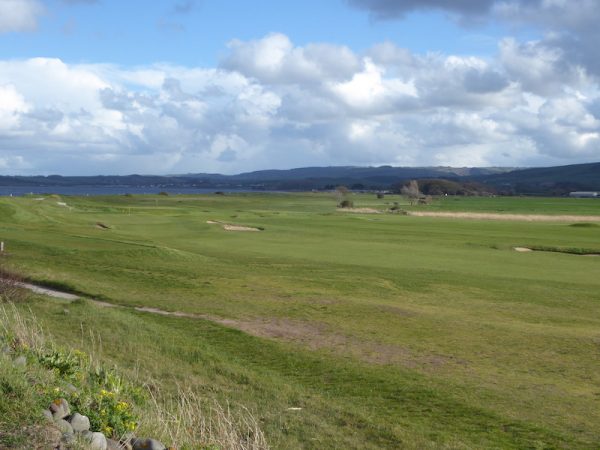 It is, therefore, with some relief that I reach the promenade in Minehead and can now walk back into the town.  I wander through the residential streets back to the caravan. It has been a good walk covering almost nineteen miles so I am looking forward to a cup of tea before lacing up the boots again and taking the dogs out for a short walk.

To view this 19 Mile Walk on OS Maps Click Here