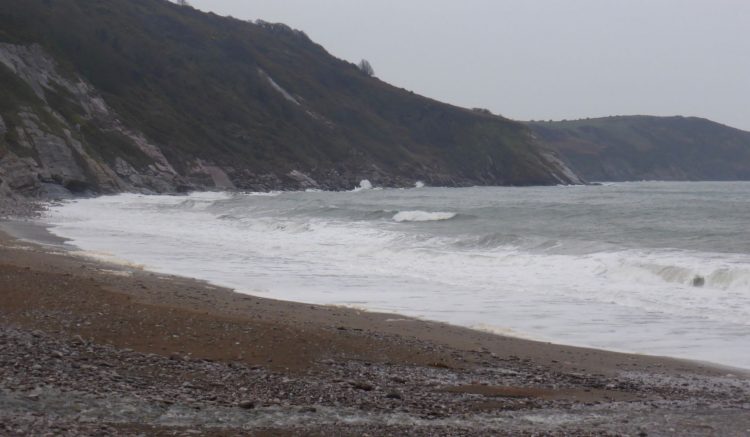 On our travels over the past four years we have been blessed with good weather, it has been rare for us to encounter a wet and miserable day.  I put this down to good clean living, letting people out at road junctions and being friendly to folk you meet for the first time.  If there is someone up there watching over us (which to be honest I doubt) then they certainly like to make sure the sun shines on us.

Yesterday we passed Greenway, which was one of Agatha Christie’s homes.  It is now in the care of the National Trust so on a wet day it is a good place to spend a couple of hours.  Lynnie, being well organised, realised the weather was not going to be good today and made a call yesterday to book a parking slot at Greenways.  So we are guaranteed entry when we arrive at the designated time. 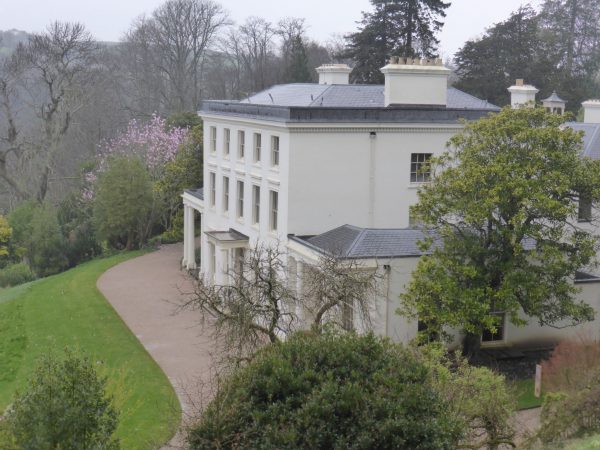 I like wandering around old homes to see the architecture and get a feel for how privileged folk lived in the past.   So a walk around Greenway sounds interesting.  As soon as we enter the house we are warmly greeted and told how Agatha loved this place.  In subsequent rooms the guides become ever more gushing and reverential about Agatha.  After going through two rooms I realise I must have missed the news when they announced that Agatha had been canonised.

Don’t get me wrong I have read a number of Agatha’s books.  The first of which was the Mysterious Mr Quinn lent to me by my Godmother, Lesley Watt, in the late sixties.  It still remains on my bookcase and is a treasured possession.  It is odd how something so inconsequential means so much.  I also have a flat cap that Jack Judd, my Godfather, gave to me one harvest.  It had seen better days as Lisa his black Labrador had eaten the lining of it; nevertheless it sits in a prized location on our hat stand.

We wander around the house looking at Agatha and her family’s many and varied collections, upstairs are Agatha’s bedroom and her toilet.  The house contains many items of interest but do visitors really need to see where the queen of murder mystery placed her regal posterior?

The bit I find most interesting has nothing to do with Agatha.  During World War II the house was requisitioned by the US Coastguard in preparations for D-Day.  What is the library became the Officer’s Mess it has a painted frieze (done by Lt Marshall Lee, a graphic artist) depicting places they had visited and battles they were involved in.  Fortunately when Agatha took the house back after the War she insisted on keeping this feature as a historic memorial. 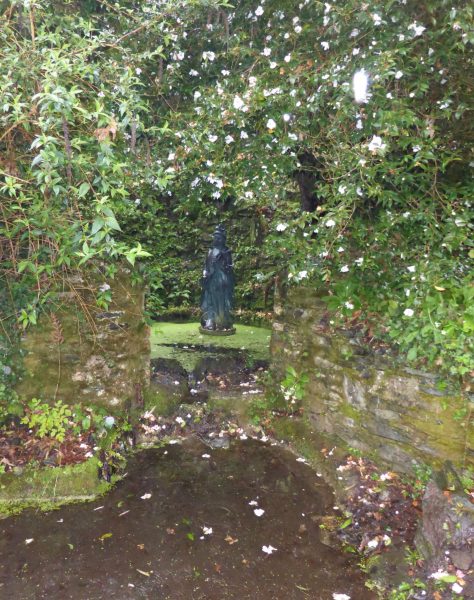 Back outside we wander around the lovely gardens boasting a number of interesting features and then walk down to the Boat House before heading back via the battlements with their fine views across the River Dart. 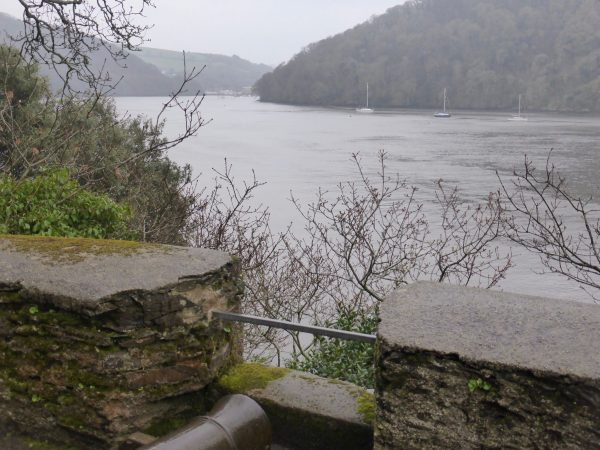 After our excursion to Greenways the dogs still need some serious exercise. Lynnie decides  the inclement weather is not to her liking so I leave her ensconced in the Coachman and head off from Hillhead Caravan Park.  At the road I turn right and soon right again to walk down Penhill Lane.  This steep descent needs care in the wet conditions and the water is flowing fast in the stream besides the track. 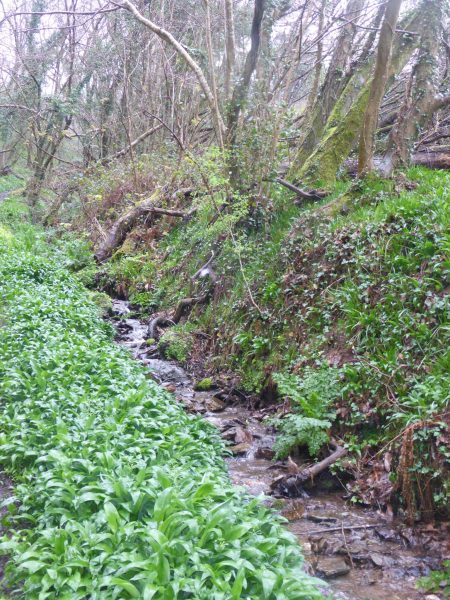 At the foot of the hill I turn left along Mill Lane. 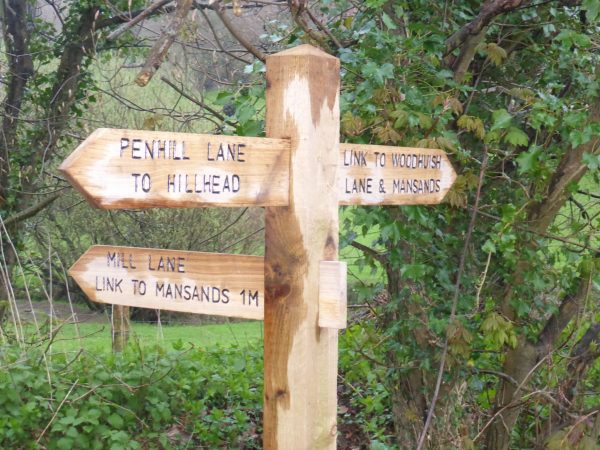 This is a steady climb uphill with views back over Man Sands and at the top I turn right to descend Mansands Lane. 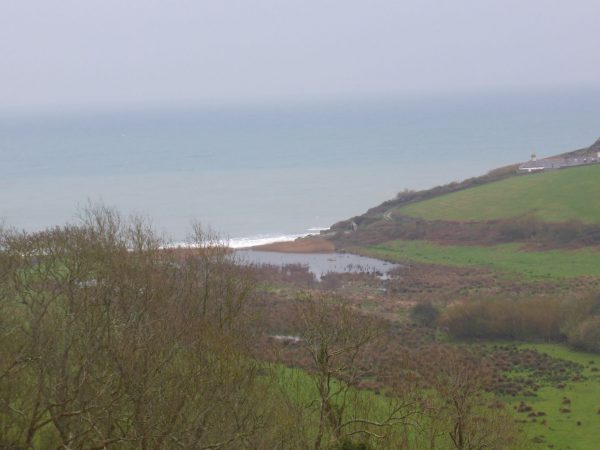 The path leads down to the beach at Man Sands.  Today it is deserted but I have read  this is a popular spot with bathers in the summer.  You would need to be hardy, foolish or both to want to venture into the sea today. 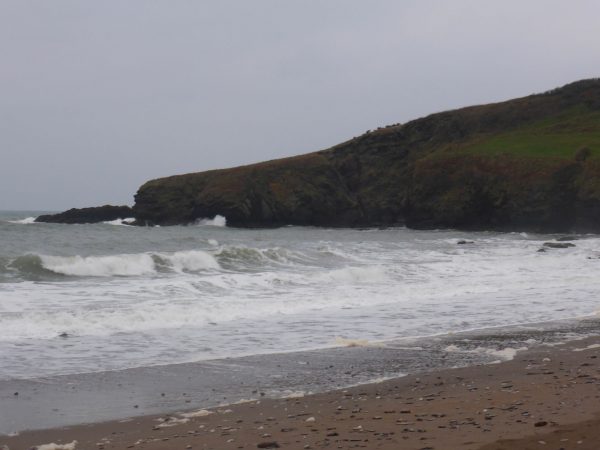 Turning right along the beach I reach an Old Lime Kiln.  I do like a Lime Kiln and this one is an impressive structure. 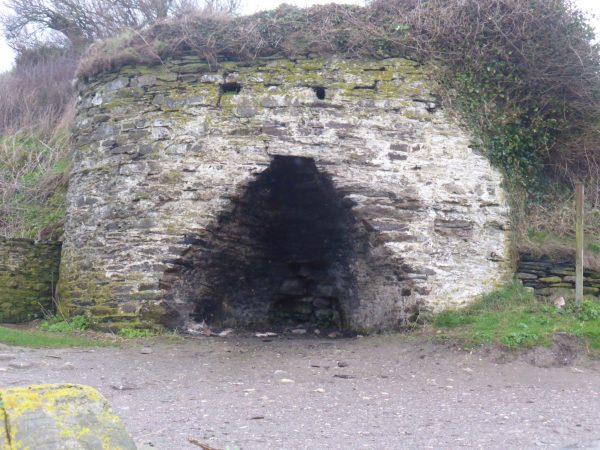 From here I turn right to go up Woodhuish Lane, this is a broad track and a steady climb that goes on and on.  Near the top the lane forks right and rapidly descends to the junction of Penhill Lane and Mill Lane.  My route is the steep ascent back up Penhill Lane and from there back to the caravan at Hillhead. 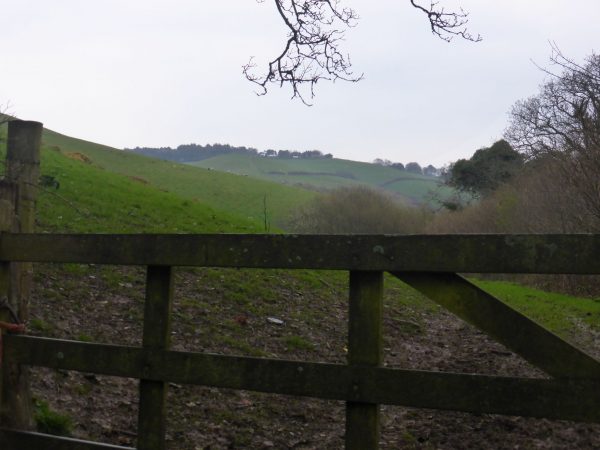 Though only covering just over four miles, not far by my usual standards, it has been a strenuous work out for the dogs and me; three serious climbs tackled at pace.

As Arkwright would say “it has been an interesting sort of a day”. 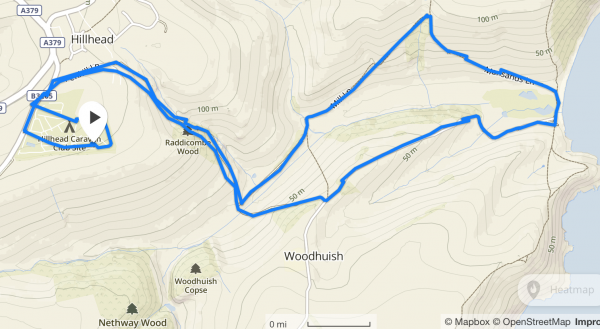