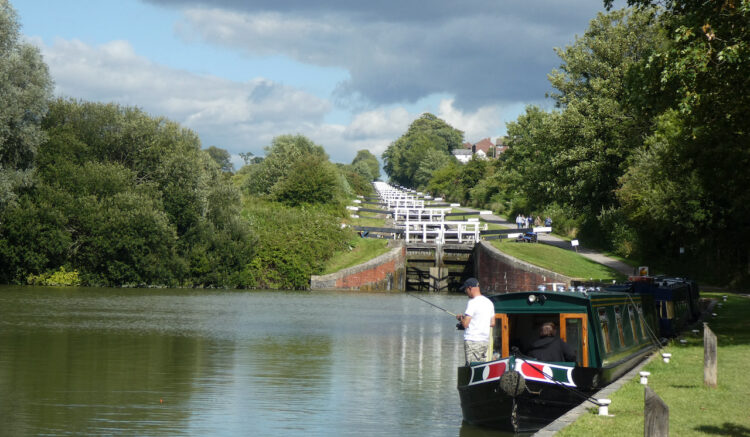 One of our reasons for visiting Horse Lane Farm CL was to explore around Devizes, in particular to make a trip to Caen Hill Locks on the Kennet and Avon Canal.  This well renowned rise of locks is a major tourist attraction, but despite being relatively close to home we have never visited.

Yesterday we only walked a few miles to give my knee a rest.  I did a short walk earlier and felt hardly any pain so feel confident that I can manage the ten miles I have planned for our main walk today.

Our starting point is the pay and display car park in Station Road, close to the centre of Devizes.  Leaving the car park we wander up into the town and resist the temptation to explore the town centre for now because there are a number of people about, hopefully it will be quieter when we get back from our walk.  We go south heading towards St John’s churchyard.

St John’s Church was built in the early 12th century by the Bishop of Salisbury as the church for the nearby castle and garrison.  We do not venture inside but it is said to be very impressive.

We head through the churchyard to pass the 17th century Sexton’s Cottage.  Apparently this was originally an almshouse and later became the home of the Sexton who was responsible for the maintenance of the church and its surroundings.

We leave the churchyard close to the Sexton’s Cottage and go over a bridge crossing the route of the now disused Devizes branch line railway.  The line was closed in 1966 and little evidence of it remains.  We now follow a footpath besides the fence of Devizes Castle.  This path leads to Hillworth Road where we turn right and then almost immediately left into Hartmoor Lane.  We stay with this road as it goes through housing and then becomes a sunken track.

The track continues to pass Furzehill Farm.  Soon after the farm we reach a bench offering fine views across the valley to Potterne.  The ideal spot to stop for lunch.

Resuming our walk we continue down the track to reach a minor road, Whistley Road and turn left to pass Whistley Farm and then stay with this lane for half a mile to reach a bridleway on the right.  We follow the bridleway to a junction of tracks near the sewage works where we turn right.

At the next junction of tracks we go left and keep with the track to reach a junction of tracks at Five Lanes.  Here we turn right to take the Hay Lane track heading northwest.  This track goes over a stream with an ornate bridge.

There are a number of footpaths leading off the track which we ignore.  The track takes us to the village of Poulshot. This is an interesting village with a large green with houses dotted around it.

To our left is an area known as Green Gardens Woodland.  In 1831 this area was enclosed for the benefit of the poor.  It later became allotments, the demand for which gradually decreased so in 1977 the Parish Council started planting trees on the land. Initially this was a small plantation but in 2003 a three and a half acre woodland was created by the planting of 1,200 trees.

There is also a handy water tap by the entrance to the gardens so I am able to top up Crosby’s drinking bottle.

From the woodland we head back towards the Raven pub and take a turning on the left into Barley Hill Lane just before reaching the pub.  After just over quarter of a mile we turn right onto a footpath along a track and follow this path to reach the A361 where we turn right and walk along the wide verge of this busy road for 100 yards and then take a left into the driveway of Foxhanger camp site.  After passing camping fields we turn left through a gate and follow the wide track down towards the Kennet and Avon Canal.

We join the canal by the Foxhanger Pump House which was installed in 1996 to pump water back to the top of the canal.  Apparently it pumps 32 million litres of water everyday which equates to a lock full of water every eleven minutes.

By the pump house is a lock, the start of a series of twenty nine locks which rise the canal 237 feet in two miles.

We now follow the towpath by a series of seven locks which are fairly evenly spaced and look no different than a normal series of locks on any canal around the country.

However, after passing the last of this section of locks comes the impressive site of the sixteen locks heading up Caen Hill.  This is a stunning sight.

Apparently to provide the bricks required to build these locks a brickyard was created at Foxhangers. The flight was completed in 1810 and was the last part of the 87 mile canal from Reading to Bristol. It is a stunning bit of engineering.  In order to have sufficient water to operate the locks large side pounds were created between fifteen of them.

It is a steady ascent up the hill on foot, but considerable effort is needed for those on a barge.  It is said to take between five and six hours to complete the full flight, but in the world of narrow boating it is considered one of the must do experiences.

We stay with the canal path to pass the Black Horse pub.  I assume this pub is usually extremely busy refreshing those that have just made the ascent up the canal.  However, the current pandemic means it is quiet.

Still on the towpath we head towards Devizes and keep with it when it changes sides and soon passes the town’s cemetery to reach Park Gates at the entrance to Roundway Park.

We now head up New Park Road towards St Mary’s Church and then pop in to have a wander around this fine old church which was originally built in the 12th century and over the years has undergone a number of alterations and restorations.

We continue into the centre of Devizes which is full of interesting buildings.  The town was built on the wealth from the wool and textile trade in the 16th century and in the 1800’s had the largest corn market in the west country.

Thankfully many of the old buildings remain and it would be worth spending a day just wandering around and learning the history of such grand structures.  Years ago I used to visit the town occasionally for work, but in those days I did not appreciate how attractive it was and the only buildings I recall from those days are the Bear Hotel and Black Swan Inn.

From the centre of the town we retrace our steps back to the car park.  Our walk has covered ten miles, far enough for a man with a dodgy knee.  The good news is it has not given any pain, so hopefully we can clock up a few more miles tomorrow.