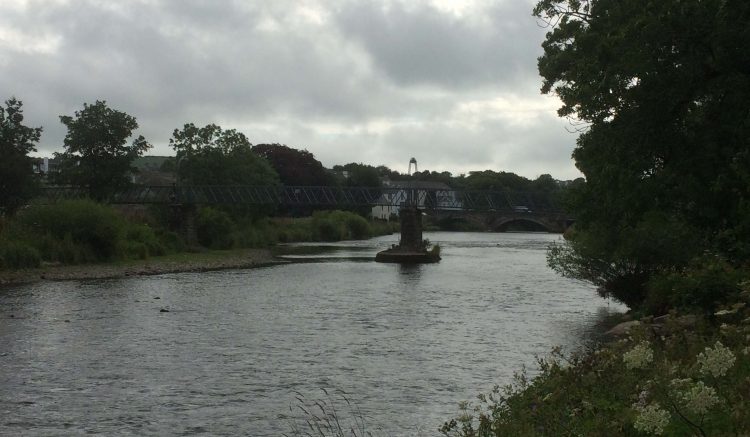 One of the places on our list to visit is Cockermouth. I am keen to see the town and some of its old buildings and Lynnie wants to visit Wordsworth’s family home.

I drop Lynnie outside Wordsworth’s Georgian townhouse and park on the opposite side of the river to walk through the Memorial Gardens with views of the Jennings Brewery and Castle across the river. Then back into the town to have a wander around.

The broad main street is in the process of being repaved and there is fencing everywhere, this detracts from the attractiveness of the town. It is not clear if this work is a hangover from the dramatic floods that struck in November 2009 or if this is a further facelift for the town. Either way it makes looking at buildings on the other side of the street difficult. The boys and I amble about enjoying the sunshine – always trying to walk on the sunny side of the street.

It is late afternoon and residents and tourists are wandering about in a very relaxed manner. There must have been a very different feel to the town on 19th and 20th November 2009 when the heavy rain caused severe flooding. It is said that the water was as high as eight foot two inches and flowing at 25 knots. Pretty scary!

Two hundred people were rescued from the floods, with one hundred and fifty being winched to safety by helicopters and the RNLI rescuing the other fifty. Many properties in the town were severely damaged and bridges needed major repairs. On Friday 20th November 2009, further down the River Derwent at Workington, PC Bill Barker was tragically killed as he was warning people away from Northside Bridge as it collapsed. His devotion to duty saved the lives of others.

Besides William Wordsworth Cockermouth has other notable ex-residents including Fletcher Christian of HMS Bounty. He was born at nearby Eaglesfield. Fletcher was the master’s mate to William Bligh on HMS Bounty on the journey to Tahiti. On the return journey a mutiny led by Fletcher broke out which led to the mutineers setting up home on Pitcairn Island.

Christian married Maimiti, the daughter of a Tahitian chief and they had three children, a son Thursday October Christian (now that is a cracking name) born in 1790, followed by Charles Christian (boring!) in 1792, and Mary Ann Christian (even more boring!) born in 1793. It is said that everyone with the surname Christian in the Pitcairn and Norfolk Islands, along with many others sharing the surname living in New Zealand, USA and Australia can directly trace their ancestry back to Thursday October or Charles.

Lynnie has enjoyed her visit to Wordsworth’s childhood home and garden – another National Property notched up. We make our way back to the Unicorn, time to pack up once again.