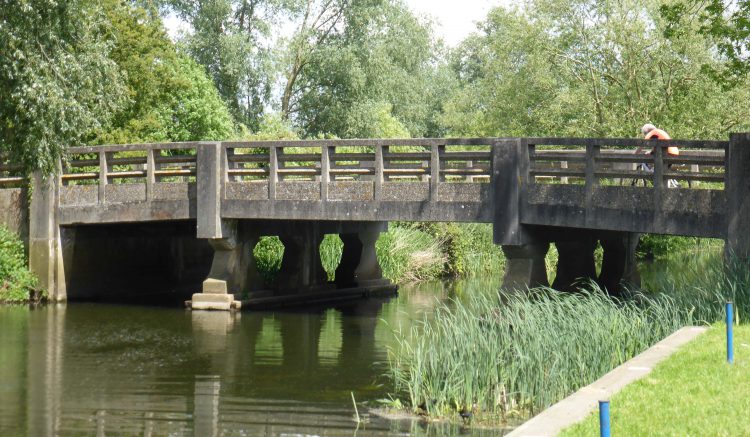 When Lynnie and I were children in the 1960’s Tales of the Riverbank was a feature of children’s television. In those days there were no specialist children’s channels it was just an hour or so each evening. So the tales of Hammy the Hamster and his mate Roderick the Water Rat, narrated by Johnny Morris were essential viewing.

After my morning stroll and describing the beauty of the Chelmer and Blackwater Navigation Lynnie is enthused by my suggestion that we take an afternoon walk along the bank. Picnic packed we head from our pitch on Little Baddow Fruit Farm through the churchyard and across the open fields to the Chelmer and Blackwater navigation. This time we turn right and walk along the towpath. 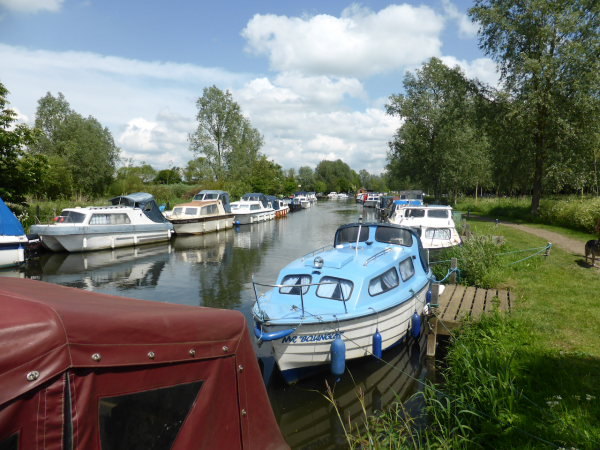 We soon come to Paper Mill Lock, there are various barges and boats moored on the banks of the navigation and the tearoom is busy. Its far too early for us to stop so onwards we go. Soon after we meet two women walking their two Labradors, one black and the other exactly the same colour as Crosby both with red collars too. We stop to chat, then check we have the right dogs with us before going on our way.

Our next landmark is Rushes Lock, where a party of school children are canoeing. Lynnie and I debate whether they are kayaking or canoeing, checking later we learn that as they were using a single blade they were canoeing, it appears they would have needed a double blade to be kayaking.

A while further on and the small All Saints Church, in the village of Ulting comes into view on the opposite bank, we are unable to cross the canal at this point to explore the church, so a quick stop for a photograph has to suffice. 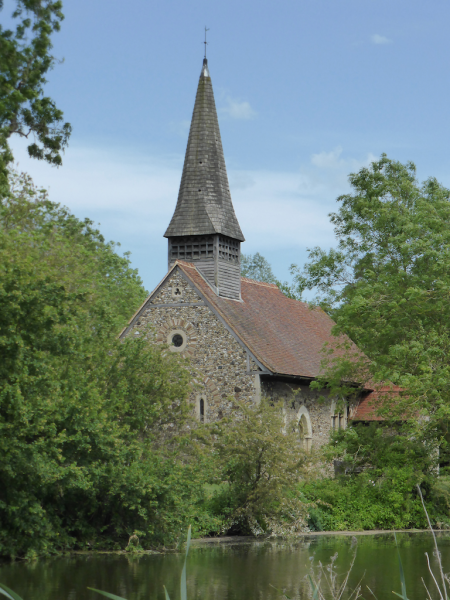 Not the first photo stop as the riverbank is alive with wildlife. Lyn has already snapped nesting swans, a family of geese on the water and horses drinking from the river. We have also seen damselflies, butterflies and numerous wildfowl. 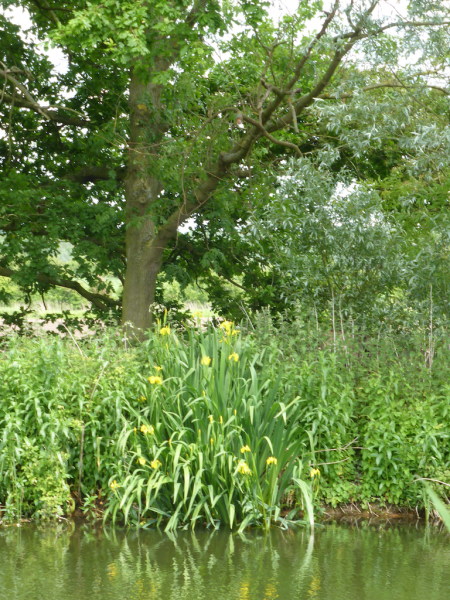 Another half mile and there are more boats and barges moored. Some are very impressive and look like permanent moorings. I have never been on a canal barge and am unsure if I would like it. I suppose they must be like a caravan on water, with the added advantages of a pub every few miles (though we have not seen a pub on our walk along this canal) and not having to fight an awning. The obvious disadvantage being that one wrong step and you end up in the drink.

We have reached Hoe Mill Lock the site of the first sugar beet Mill in England, the mill opened in the 1830’s but no evidence of its existence remains. We cross the road bridge and join the path as it continues seaward on the opposite bank.

It is a long way to our next landmark, when we reach it our efforts are justified, here the rivers Chelmer and Blackwater converge and there is an intricate network of streams and islands. The weir is most attractive with a steady stream flowing over it, it must be outstanding when the river is in full spate. We join the Langford Cut, initially taking us alongside the Maldon Golf Club, from our vantage point it looks to be flat and devoid of any features, not one for my list.

We go under a couple of road bridges and then alongside a large factory unit until gradually the houses dwindle and we are again in open countryside. Increasing numbers of boats and barges are moored on the banks and then we reach Heybridge Basin, time for refreshments. Lynnie wants a coffee and I fancy a cup of tea. The refreshment stop is the Old Ship Inn alongside the sea lock. On entering I am faced with a beer tap displaying Maldon Gold, brewed at the local Maldon Brewery. A beer I have not previously encountered, I abandon the tea and settle for a pint. I think I deserve it having walked ten miles this afternoon and six before breakfast. 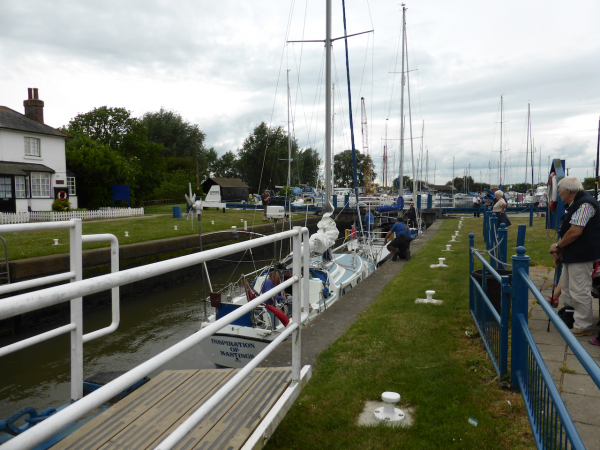 Drinks in hand we watch the lock keeper as he allows two vessels to enter the navigation from the sea. Thirsty work watching someone else labouring! Once he has closed the lock gates we are able to cross and walk the path around the high banks of the estuary. Maldon is situated on the opposite bank and looks an interesting place with large barges moored in front of an old church. 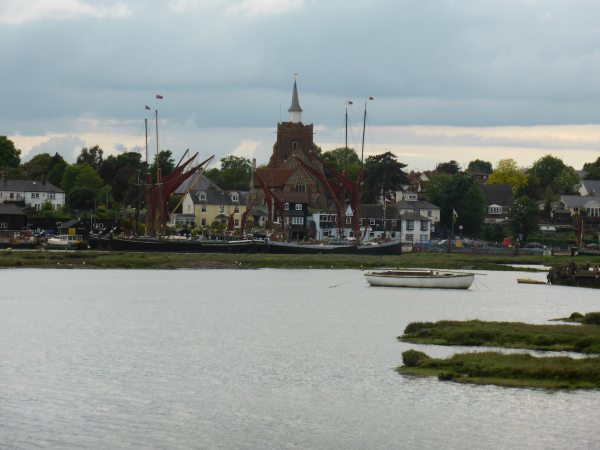 We follow the path through an industrial estate before turning left and walking alongside a busy road into Maldon. We navigate a couple of roundabouts and cross the river Chelmer before joining a footpath running alongside the river.

After negotiating a couple of stiles we arrive at Beeleigh Abbey a monastery constructed in 1180 for the White Canons. After the dissolution of the monasteries many of the abbey buildings were destroyed. In 1540 Henry VIII granted the abbey and lands to Sir John Gate, Chancellor of the Duchy of Lancaster. In the 18th Century the building became a public house and by the late 19th century was in ruins. In 1912 Captain F.W Grantham began restoration and in 1943 William Foyle, owner of the Foyle’s bookshop, purchased the Abbey. On certain days of the year the Abbey gardens are open to the public, unfortunately not today. 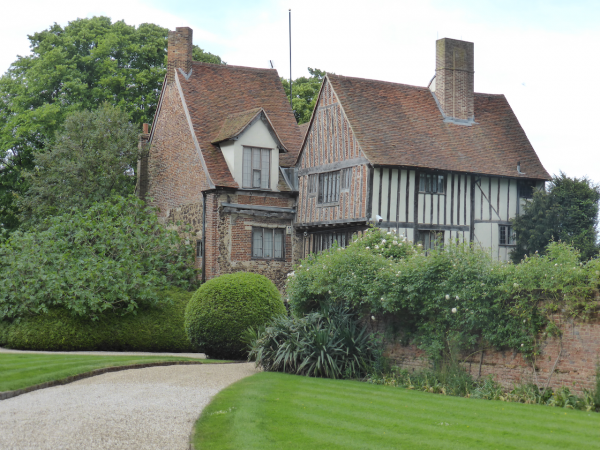 On reaching the road we turn right and within a hundred yards join a footpath on our left and follow it across open fields until we reach another road. Here we turn right and then almost immediately left by Guy’s Farm. Following this lane until it bends to the left, we go straight on a footpath. After a couple more fields we emerge onto another lane and there on our right is a pub called The Cats. I fancied a pint, but I am allergic to cats so keep going.

The lane takes us to a split crossroads and we head straight across. Just short of Bower Farm we take a footpath leading through horse paddocks and then through a field adjoining a house. This field has an incredible array of large aerials located within it. Looking at the huge number of cables running to the house I decide I would not want the electricity bill.

We are now at Crossways and take the lane directly in front of us to walk into Little Baddow. We come to a crossroads and debate walking to either of the two pubs in the village, but time is getting on and we have dinner to cook at the Unicorn. We pass through the village with its impressive houses set back in their own substantial grounds. It reminds us of Weybridge where Lyn and I first met and had our first home together, (not that our home was set in its own grounds, although we did have a small garden).

Finally we return to the Unicorn, having walked just short of eighteen miles. The boys and I have done twenty-four today, we are all hungry and ready for a good, long kip. Johnny Morris was a master at putting words into the mouths of animals. After we have all eaten, just before going to bed, I grab the boy’s leads to take them out to stretch their legs. If Johnny Morris had spoken the words that Dexter’s look conveyed then he would have been banned from children’s television for life. I didn’t catch the first word but the second was definitely “off”!

To view this 18 mile walk on OS Maps Click Here 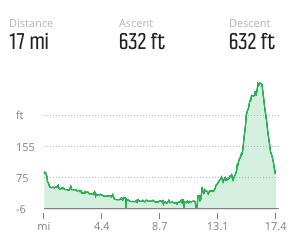