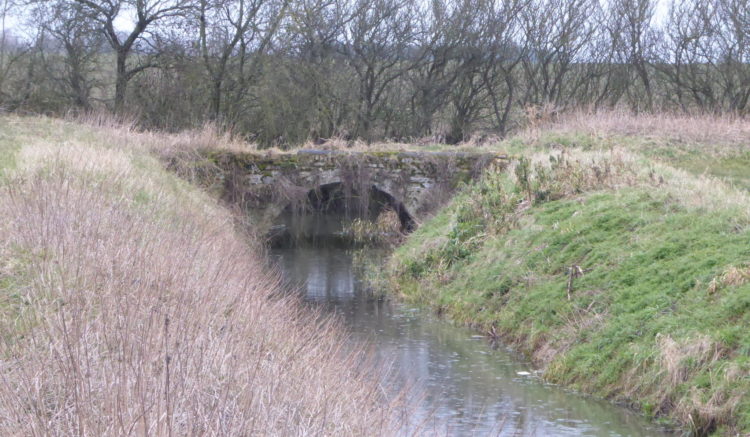 It is one hundred and one nights since we were last away in the caravan, or to be more accurate since I was last away in the caravan because the last trip I was running solo with only Crosby for company.  This is a longer break than I had planned, but it has meant that we have been able to get a number of long awaited jobs done at home.

In the intervening period we have also had a change of caravan.  I have long hankered after a twin axle, the attraction of additional space with the two dogs and the added benefit of the stability when towing was what I desired.  Lynnie was not so convinced and reluctantly visited our local Coachman dealer, not believing my protestations of “we are only looking”.  However, despite my best intentions not to buy a new van an hour later we had signed up for a new Coachman VIP 675.  We collected it a couple of weeks ago so this is our inaugural trip.

Early on our tour in 2014 we visited Suffolk and Norfolk and as of yet have not returned.  We plan to visit both again this time, but first we are spending some time near Ely.  When a friend recently asked how we chose our destinations, I explained that we often looked at a map and thought, “we’ve not been there before” and worked that location into our travels.

Yesterday we drove about 160 miles from home to our pitch at Heatherbield CL in the village of Little Downham.  I am not sure how many thousands of miles I have towed a caravan, but at some point on every previous trip I have mentioned how it was bouncing about, during this trip I just keep saying to Lynnie how steady it feels.

Arriving at Hetherbield CL we are warmly greeted by the owner, Andy, who promptly goes off to make us a cup of tea and returns with cake too! As always with a new van it takes slightly longer to pitch, which in this case is mainly trying to fix the Alco Locks to the wheels.  But it is not too long before we are pitched up.  However, it was dark before I took the dogs out to stretch their legs so I couldn’t really see the village.

My early morning walk with the dogs is a couple of miles around the edge of the village.  It is a frosty morning, but it feels good to be out walking in fresh territory. 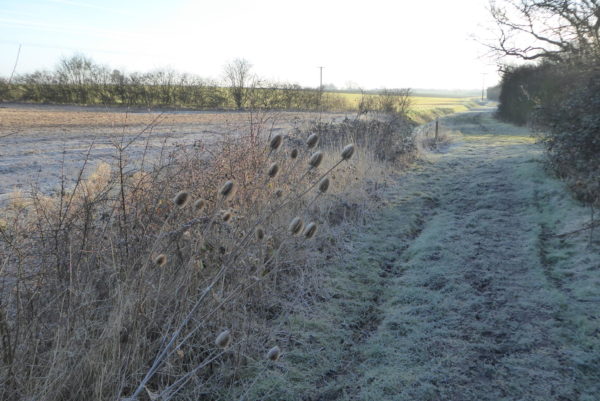 Currently I am still doing some work, mainly to pay for a new caravan!  So it is early afternoon before we set out to explore.  Leaving the CL we turn right and head into the main part of the village of Little Downham.  As we walk up the road I wander across to look at the village sign erected to commemorate Queen Elizabeth II Silver Jubilee in 1977.  I notice that it refers to Downham in the Isle. 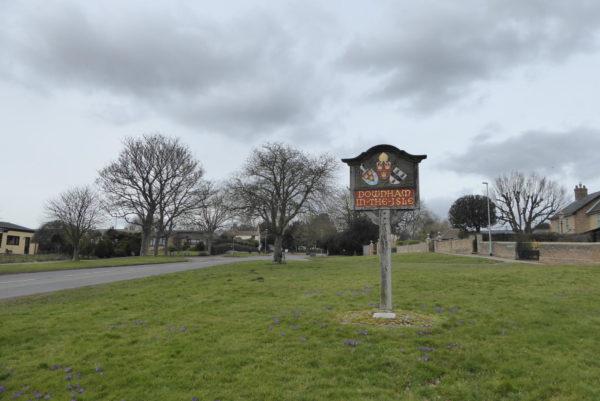 Nearby is an information board explaining the history of the village.  Apparently the Bishop of Winchester gave the Manor of Downham to the monks of Ely in 970.  The link to the church remains with the Bishop of Ely being the Lord of the Manor.  The Isle villages were originally low hills in the fens around Ely and were once true islands.  In medieval times the Bishop had a summer palace on the outskirts of the village with a 250-acre deer park.  Then around 400 years ago the marshes were drained to create rich farmland much of which is below sea level.

The village contains a mix of more modern properties and some that have been around for a couple of hundred years.  I am always reluctant to take pictures of peoples homes, so I take a shot of the village hall built in 1790, part of this building was once the village school. 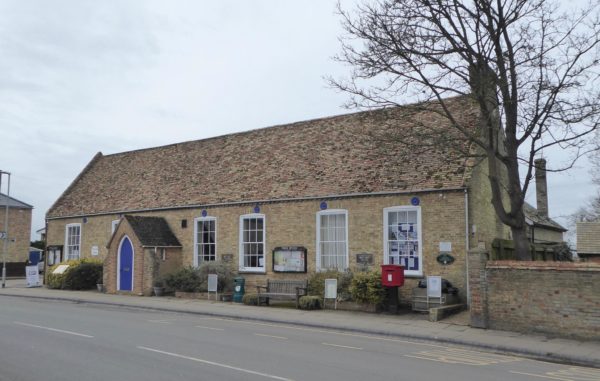 We walk through the village passing the Anchor and Plough pubs; hopefully during our stay I will be able to wangle a visit to one, or possibly both of these establishments. Leaving the village on the B1411, which within a few hundred yards sweeps to the right, we carry straight on along the High Road.  High in these parts is a relative term as it is only a few metres above sea level.

A bit further along as we approach Windyridge we spot a trig point in the field, not keen to enter private land I content myself with a picture from the gate.  I am pretty sure this forty- sixth trig point is the lowest I have bagged on our travels at 17 metres above sea level. 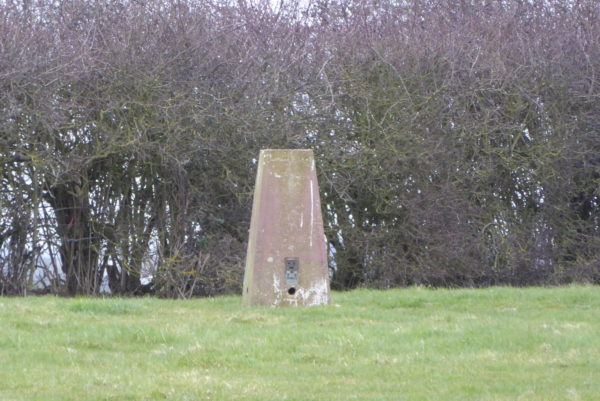 At a junction we turn left down Red Caps Lane and follow this road, which turns to a track after Otter Bush Farm to reach another track.  As we head down the track we stop to look at the view of Ely Cathedral in the distance. 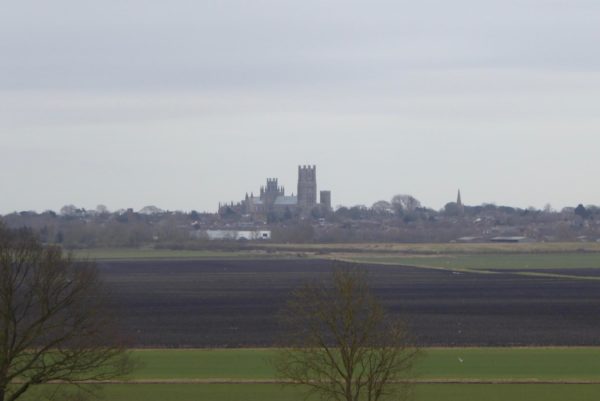 The path heads downhill slightly, well about as downhill as it gets in fenland, to reach what is described on the map as Foxey Farm, although most of the remnants of a farm appear to have gone.  Here we turn left to join West Fen Drove and follow this towards Little Downham. 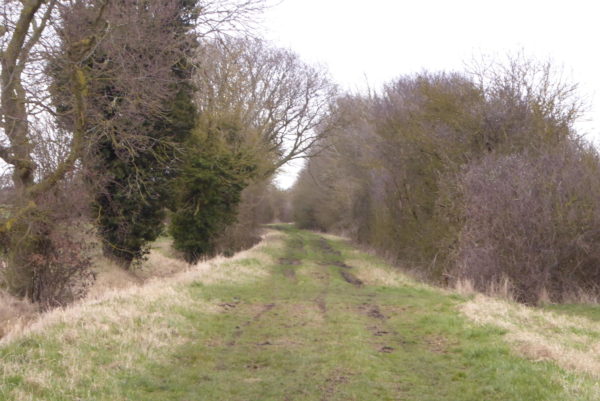 The going is a bit soft, but firms after we go through a gate and follow a footpath besides fields.  We then join Clayway Lane and follow this around The Holts Nature Reserve, the notice board explains that this area is a surviving fragment of the old meadow field system which was once characteristic of fenland villages.

We follow the track past The Paddocks; it is now really heavy going not helped by the steady drizzle that has started.  At a junction we turn left up Fox’s Drove.  Lynnie and Dexter have become detached.  I turn to see them trudging along behind.  I am not entirely certain that either are enjoying their bit of out! 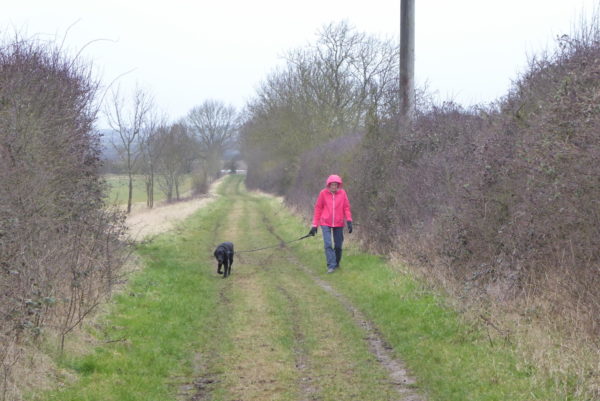 On reaching the Downham/Ely Road we turn left and then almost immediately cross the road to join another track, The Balk, and follow this until it almost reaches the busy A10. Unfortunately the drizzle has now turned to steady rain. Just short of the main road we turn left along a track besides a drainage ditch. 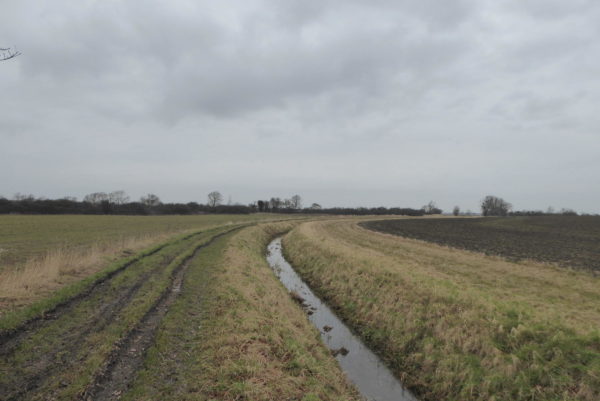 At a junction of tracks we turn left just before a bridge over a ditch to walk a short distance to a second bridge where we turn right to join Coffue Drove.  We follow this drove back to Little Downham passing Beild Drove Farm and joining a minor road leading besides the restored windmill; this has been given a new lease of life by having a Grand Design makeover. 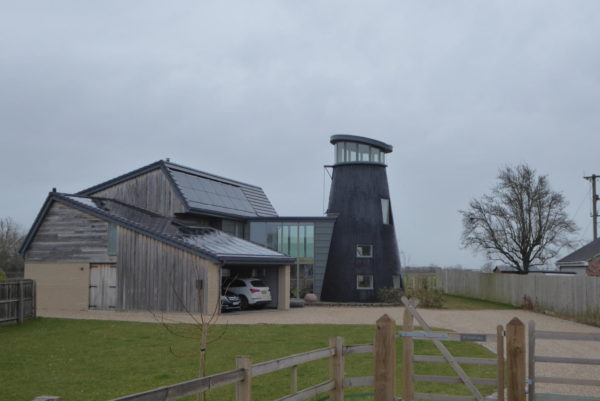 From here we turn left and return to Heatherbield CL having walked xx miles.  Sitting with a  cup of tea looking out at the restored windmill, which borders the CL, I read that it was a ruined 19th century windmill that had fallen into total disrepair, without sails, windows, or cap.  Looking at the pictures of it in a derelict state I have nothing but admiration for the people with the vision to turn this industrial history into a modern eco-friendly living space.

To view this 6.5 mile walk on OS Maps Click Here