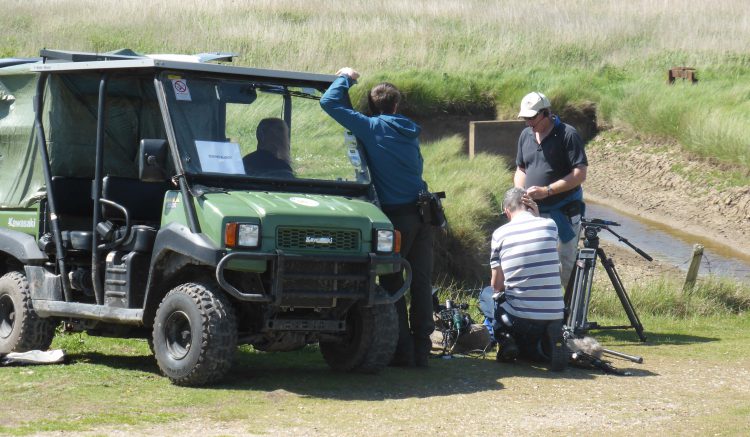 We are in the car, as we reach the end of the lane from the site I check with Lyn that we are heading towards Orford. Quickly, but not abruptly, I am advised that we are going on a different walk than I had anticipated, near Minsmere.

Responding in the appropriate way to the directions being given by Lynnie we head off towards Minsmere nature reserve (unlike the audio on the sat nav I am unable to turn my passenger to mute). I am shocked when told to turn down Lover’s Lane and then advised to turn along a wooded track and park up. It transpires that my co-pilot does not have romantic plans. This is the starting point for our walk.

Boots on, we head along the track, soon turning right to join another stretch of the Sandlings Way. Following the waymarks through Leiston Carr, Kenton Hills, Nursery Covert and Goose Hill, I am always intrigued by the way that areas of woodland are named. Eventually we arrive at the beach, with Sizewell Nuclear Power Station to our right and Minsmere Nature Reserve to our left. Unsurprisingly we opt to turn left.

It is a glorious day walking along the coastal path, (my kind of coastal path – no cliffs!) we start to get views over the nature reserve and spot the ruins of an old chapel. This is all that remains of the site of the original Premonstratensian Abbey that moved to Leiston in 1363 because of the increased flooding of the coastal site. A touch of global warming kicking in early or lack of sea defenses? The chapel continued to be used until the dissolution of the monasteries in 1536. 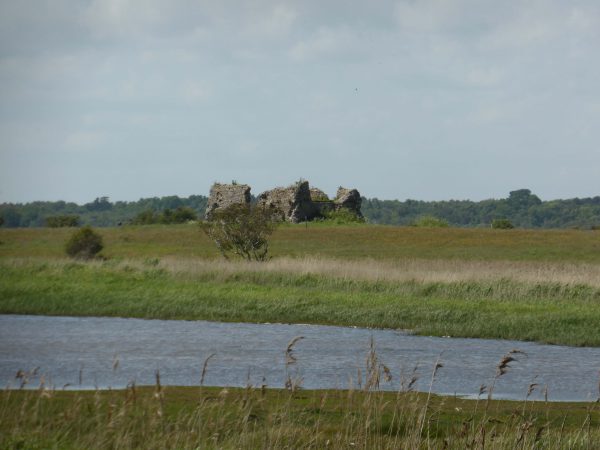 As we approach Minsmere Sluice there are increasing numbers of twitchers about. We wonder what has caught their attention, soon it becomes obvious. It is the Lesser Spotted Celebrity that they are after. Springwatch is in town, or to be more accurate Springwatch is in Minsmere. The sight of TV cameras and sound engineers have folk preening on the off chance they may feature in the broadcast. It is packed, I would like to think that it is always this busy, but cynically believe that the TV cameras are responsible for the large numbers of folk. 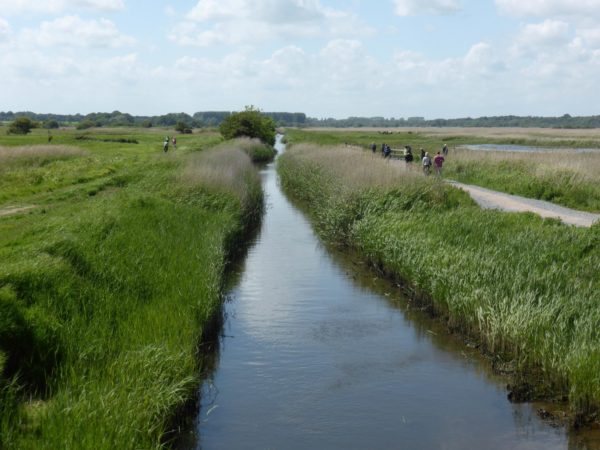 Having taken our obligatory photo of a camera crew we detour away from the footpath onto the beach. The fishermen here are oblivious to what is going on just behind them. As we approach a group it is clear some tuition is taking place. I don’t know much about fishing, but I do know you want to avoid getting anywhere near someone about to cast, especially a novice. We take a wide berth, as does one of the group. She explains that this is her first time fishing, it was not something that she had ever wanted to do but when invited thought why not. She was thoroughly enjoying the experience, but as a one off, never to be repeated. She is intrigued by our travel plans and we part with laughter and that refreshing feeling that comes from having had an interesting chat with a total stranger.

We progress to the Coastguard Cottages above Minsmere Cliff (Cliff being a relative term in these parts). There is a tearoom, so we stop for a cuppa. 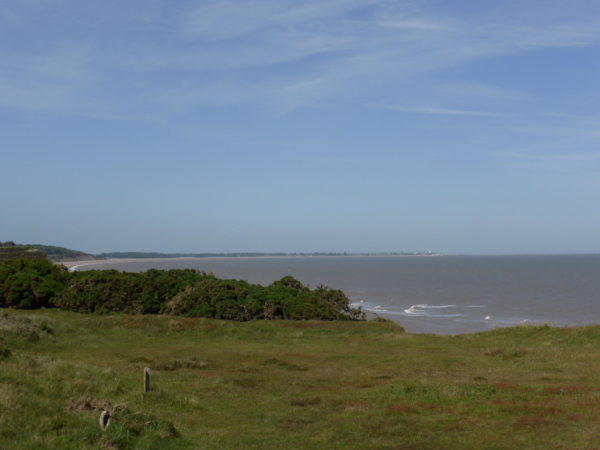 Refreshed we continue, initially by the nature reserve, where we see a cameraman filming bees emerging from the rock sand. Soon we leave the nature reserve for the woods and arrive at a kissing gate. Always an opportunist, when we get to a kissing gate I try to make the most of it, (I hasten to add that the recipient of my puckered lips is more often than not Lynnie). A couple on a seat observe our romantic moment and laugh, usually it is Lynnie that laughs!

We pass through an attractive wooded area. The fallen trees have been allowed to rot and there is a slightly bewitched feel about this bit of woodland. I am usually comfortable in the woods at night, (definitely more so than when walking through Wakefield one night a number of years ago), but I would not want to be here after dark. 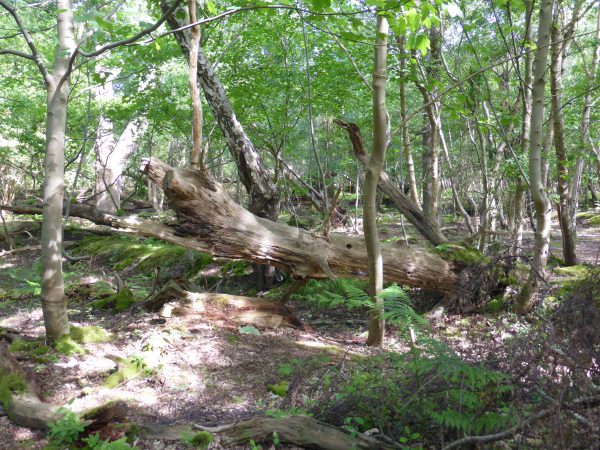 Next we cross open fields and then climb Saunders Hill (call that a hill!) and enter Hangmans New Wood (another place not to be after dark) our route then joins the way marked trail into Eastbridge.

Our earlier conversation with the lady fishing on the beach involved recommendations of local pubs, one was the Eel’s Foot in Eastbridge. The pub garden looks attractive and it’s about time for a sharp’ner. The beer is Southwolds and the chap at the end of the bar (who turns out to be the Landlord) recommends the Gunhill, “it comes straight from the barrel”. In my early drinking days in the Hook and Glove the beer straight from the barrel was known as “one from the ditch”, such a term would have been applicable here.

Leaving the Eel’s Foot our route is straightforward, along the narrow lane that takes us to the track leading back to the car. Our stroll has covered eight miles. The boys and Lyn seem happy with this sort of distance.

We decide to visit the remains of Leiston Abbey on our way home. They are impressive ruins, albeit that most of the former abbey has disappeared. This is where the Abbey relocated from its damp surroundings at Minsmere. The Premonstratensian, or White Canons (as described in an earlier blog – canons as opposed to monks, their work involved preaching and pastoral duties), lived here in relatively small numbers given the size of the site. It would appear there were only about fifteen at anyone time. 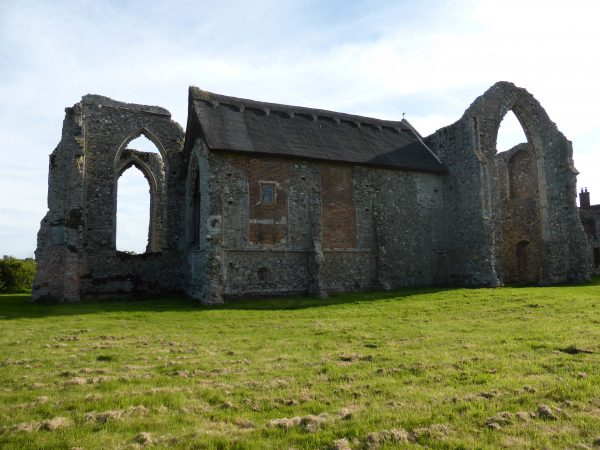 Back at the Unicorn I admit that it has been an interesting day, not the trip to Orford I had planned and thought we were having and several miles short of the required daily distance, but nonetheless enjoyable. I bet you can’t guess where we are going tomorrow! 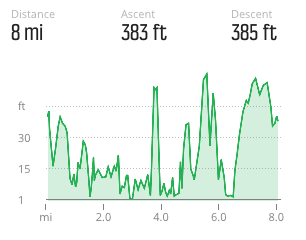