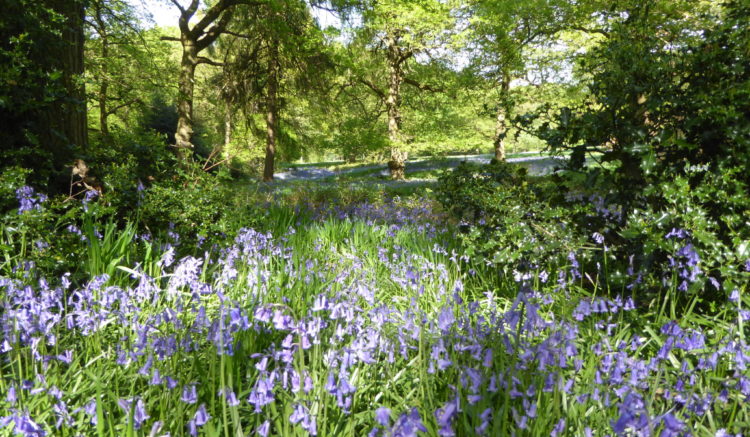 Having spent a few weeks at home we are on the road again!  This time we are heading north to West Yorkshire, we planned this trip in January and I have been looking forward to it ever since.  After four hours of driving it is a relief to arrive at Holly Tree Cottage CL. We receive a very warm welcome from the CL owners Alison and Ashley and after setting up go for a pleasant evening stroll.

Waking in the morning I step out of the awning and take in the stunning view.  It is one of the things I like about our travelling lifestyle, every couple of weeks there is a changing vista.  This one ranks up in the top ten. 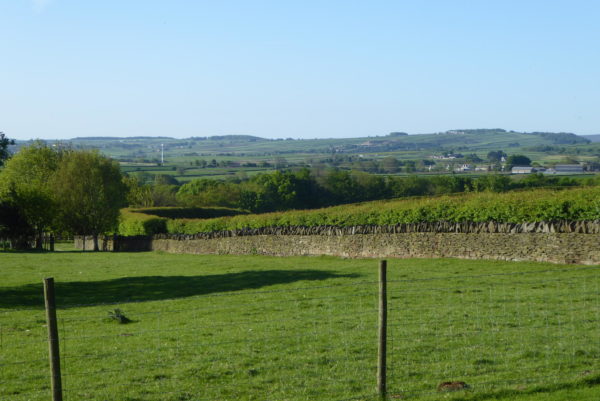 I take the boys out for a pre breakfast walk; it is a cracking morning with the promise of a dry sunny day. 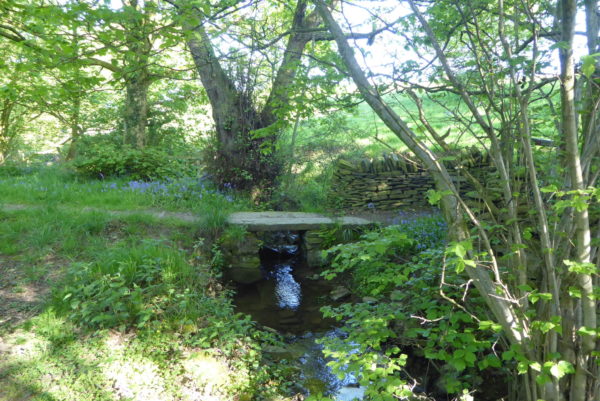 We spend a relaxed morning around the caravan, I am catching up on blogs whilst Lynnie reads her book and the dogs enjoy lazing around in the sunshine.  We are in no rush to head out, the last few weeks have been hectic so a relaxing morning is just what we need.  It is early afternoon by the time we decide to put the walking boots on. We leave the site and turn right into the village and then turn left along Bank Lane. 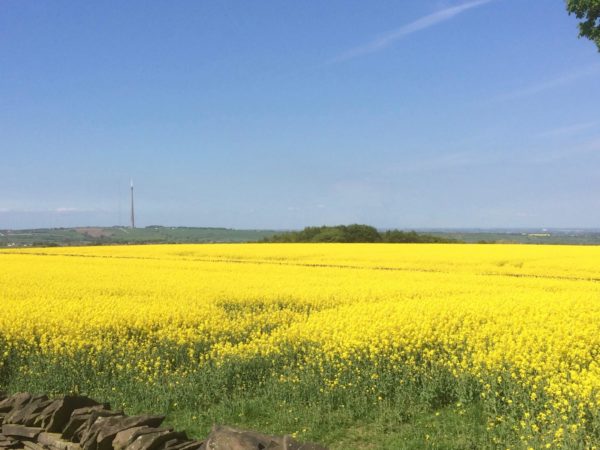 After a few hundred yards we take a footpath towards Denby Delf which initially leads along a track and then a fenced footpath. On the horizon we see a galleon, not what we were expecting this far inland! 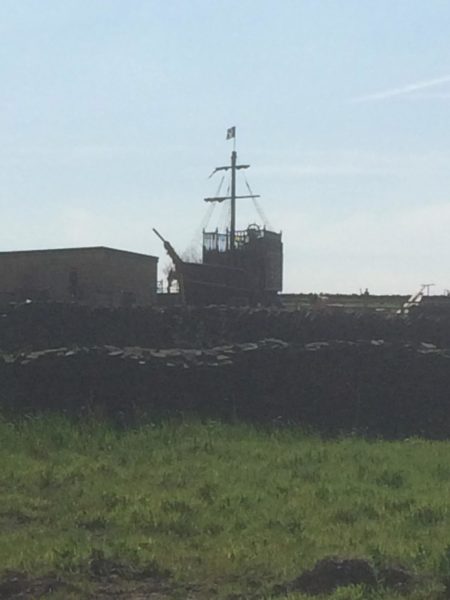 After passing the galleon, one of the finest children’s play houses I have seen in a garden, we turn right taking the footpath that descends through Denby Delf.  This area was once a quarry and apparently is known locally as Mosley Roughs.  In the 1990’s it was owned by the Meadowland Trust but following a Charity Commission enquiry the ownership passed to the Crown,bona vacantia.  It is now an open access area in the control of the local council and being managed as a nature reserve.  It is a stunning spot. 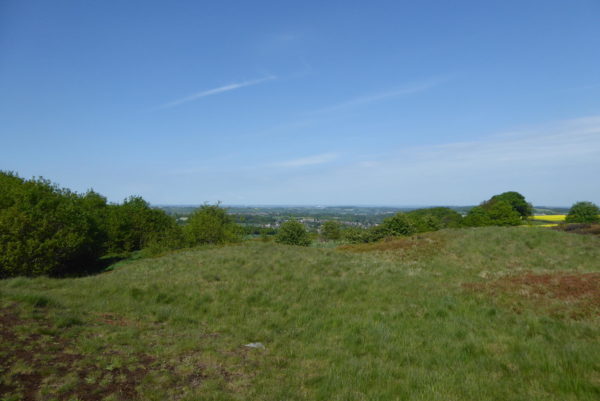 The clear route heads steadily downhill, as we walk we are surrounded by butterflies making the most of the spring sunshine.  The path leads into a meadow; Lynnie decides that the Emley Moor Tower is perfect for a re-enactment of the 1960’s Waddingtons board game “Spyring”.  We have been together for over 35 years and I thought we knew most things about each other, but it transpires that as children we both played this board game. We try to recall the details of how the game was played. We remember the spies collected letters to spell the word ‘Fish’ in different languages and communicated via aerials in their hats.  When we get back home I might look in my father’s house to see if he has kept the game! 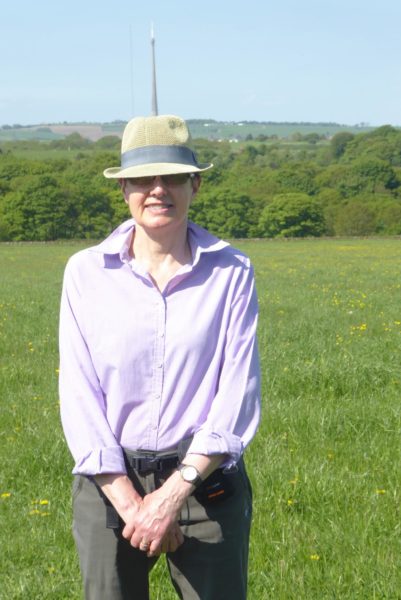 We continue along the footpath to Wood Farm where we turn left to enter New Park, by the gate there is a fine wooden sculpture depicting the industrial past of this area. 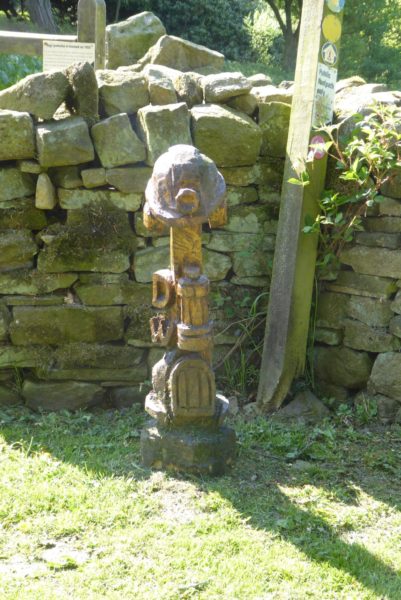 The path is clearly way-marked through the woodland. There are Bluebells in abundance, back home in Wiltshire they are beginning to go over, but here they are still in full bloom. 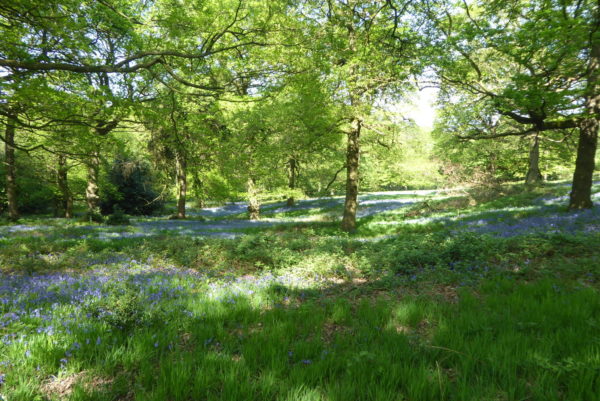 After crossing a field of pasture we enter Upper Dearne Woodland and follow the path as it runs besides and then crosses a stream. We stop to watch a Jay, it is years since I saw one this close. 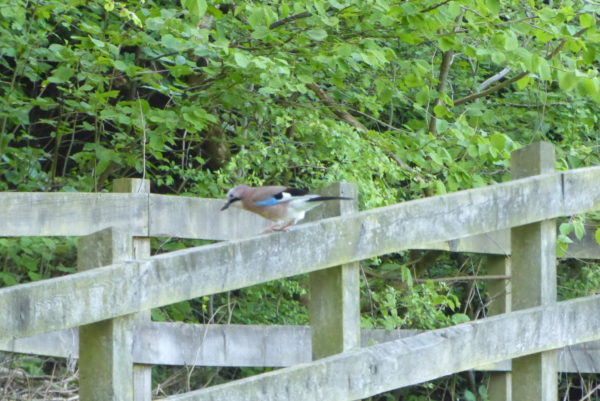 There are a number of paths leading out of the wood to the right, but we ignore all of these. This is a cracking section of woodland and we are in no rush as we amble through it. 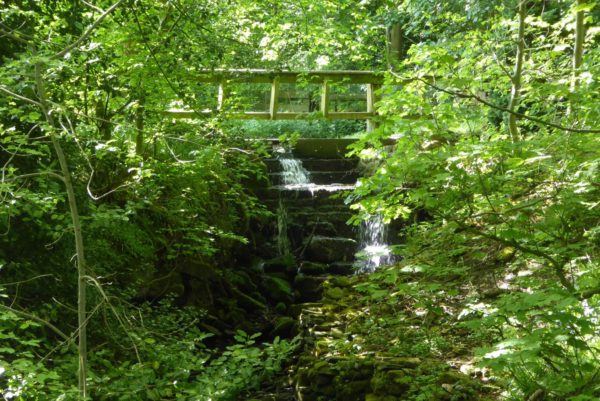 We emerge from the trees to enter a field of pasture with young steers.  Fortunately they show no interest in the dogs or us, on reaching a lane we turn right going past Lane Head and then up into Upper Cumberworth. At a minor road we go right and at the A635 turn left and carry on, soon reaching a crossroads.  Here we turn right to head downhill along Rowgate leading into Howgate Lane, where we get great views of the Emley Moor Tower. 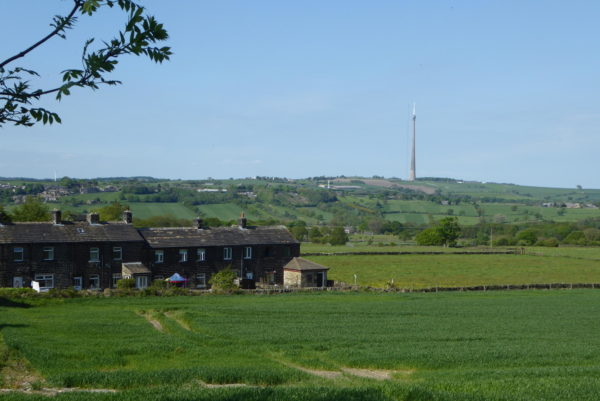 Emley Moor Tower is a telecommunications and broadcast tower which began transmitting in 1971.  Apparently it is 1,084 feet tall and the tallest freestanding tower in the UK. It is the third tower to be constructed on the site, the first was erected in 1956 and stood at 443 feet and in 1964 a tower of 1263 feet replaced it.  This structure was a cylindrical steel mast supported by guy ropes, during winter months it was prone to becoming coated in ice, on 19thMarch 1969 the combination of ice on the mast and guy ropes and strong winds resulted in the collapse of the tower.

At a junction we turn right along Birk House Lane, as we walk along we watch a Pied Wagtail flitting between the drystone walls and road. 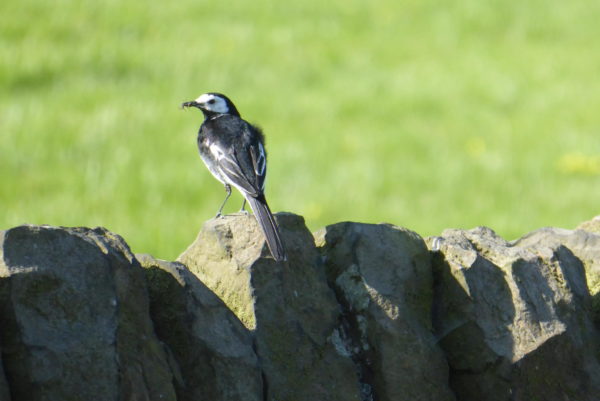 On reaching Long Royd Lane we turn right along it, we ignore the first footpath on the left, but take the second leading around Long Royd Farm.  On reaching a field the path forks and we take the right option leading across a field to enter woodland and then through further fields to enter Lower Cumberworth via the village cricket ground.

On joining a road we turn left and then soon fork right along Top Road, turning left at the end and then soon taking a right along Lane Hackings Green.  This road soon turns into a track as it heads out of the village into open countryside.

We follow this footpath to a lane where we turn right and head towards Denby Dale. As we enter the village we walk through housing to reach the main road and then turn right towards the centre soon reaching the Denby Dale Pie Hall. 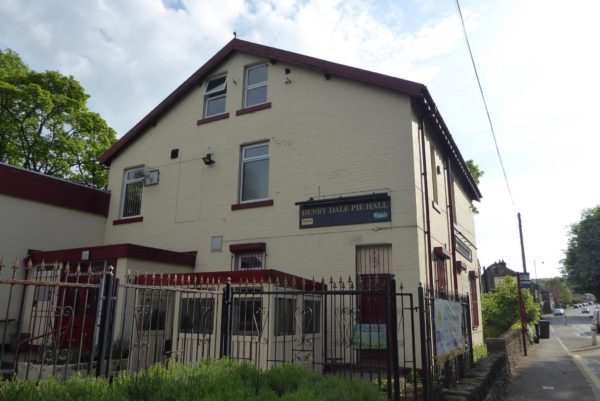 This village is renowned for its giant pies.  Apparently back in 1788 the first giant pie was baked to celebrate the recovery of King George III from mental illness.  The next pie, The Victory Pie, was baked in 1815 to celebrate Wellington’s victory at Waterloo. Then came the 1846 Repeal of the Corn Laws pie, scenes of chaos ensued when the temporary stage housing this pie collapsed.  The fourth pie was baked in August 1887 to celebrate Queen Victoria’s Golden Jubilee, left too long this became inedible and had to be buried in quicklime, two weeks later another pie was baked, known as the Resurrection Pie. The next pie came in 1896 to celebrate the 50thanniversary of the repeal of the Corn Laws, there was then a gap until 1928 when the Infirmary Pie was baked to raise money for Huddersfield Infirmary. The eighth pie, The Village Hall Pie, served 30,000 and was baked in 1964 to raise funds for the construction of the Pie Hall.  In 1998 a pie to celebrate the 200thanniversary of the first pie served 90,000 people and then in 2000 the Millennium Pie, the biggest yet, measuring 40 feet long, 9 feet wide and three feet deep was cut by the cricket umpire Dickie Bird and served 22,000.  The 1964 pie dish now serves as a planter outside of  Pie Hall. 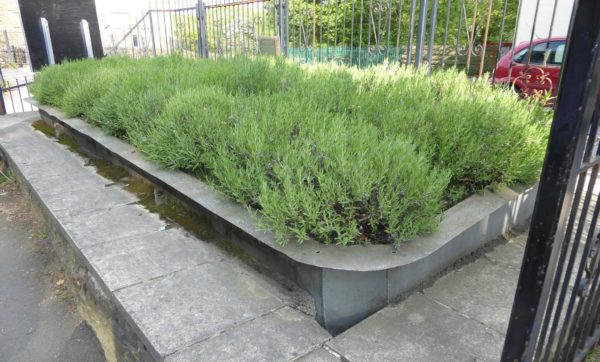 Resuming our walk we head along the road to take a lane just before the railway viaduct, this leads downhill to a stream, which we cross on the old clapper bridge. 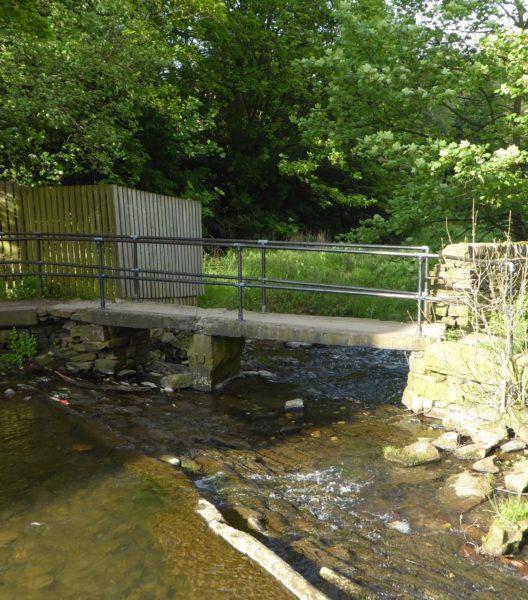 Our route is now along a road with new houses nearing completion before heading uphill on Bank Lane to reach the Barnsley Road (A635) where we get a good view of the viaduct.  This stone structure was built in 1880 and replaced a wooden structure constructed in 1846, this was notorious for wobbling as trains crossed and had to have buckets of water strategically placed in case of fire.  I am not sure it would have led to a relaxing train journey! 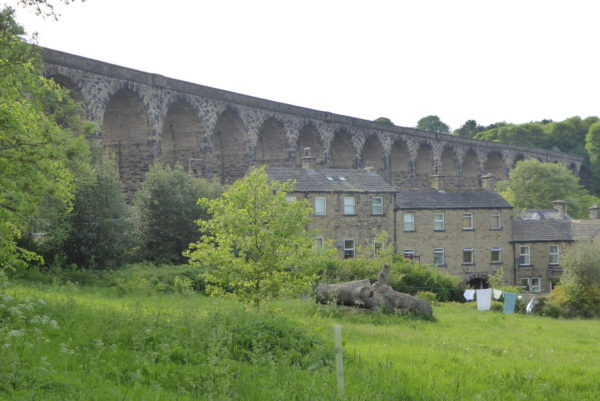 Turning right under the viaduct we take a way-marked lane on the left, ascending the hill on a stone paved walled track. 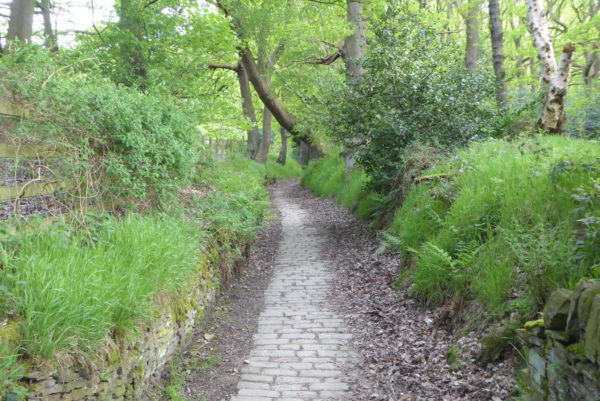 Stopping for a breather at the top of the hill we get good views back across the valley. 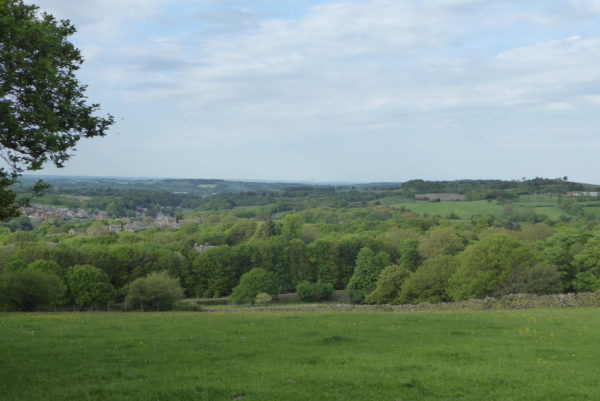 From here it is an easy stroll back to Upper Denby.  Arriving at the village green we stop at the information board to read about the village history including the tale of two local women accused, but acquitted, of witchcraft.

Our walk has covered just over seven miles and has been an interesting introduction to this area. It is now time to settle down with a map and plan a few walks on the nearby moors.