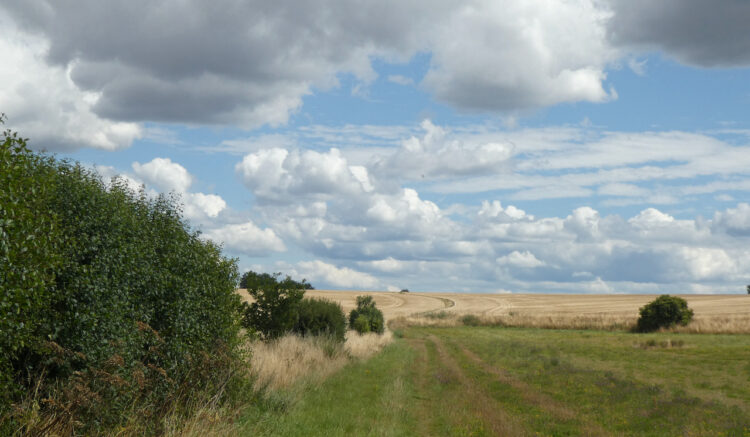 After our trip away in the caravan last week I am back walking on Cranborne Chase today in the company of my walking buddy Mandy.   This is a regular walking location for us and today we are going to do a circuit from Martin Down to the village of Sixpenny Handley.

The starting point for our walk is the Martin Down Nature Reserve car park besides the A354 (Grid Ref SU036200).  From the car park we walk back to the entrance by the A354 and cross the main road with care to join a footpath on the opposite side heading towards Vernditch Chase.

The route soon crosses an old Roman Road and enters woodland. This section of woodland is also part of the Martin Down nature reserve and there are a network of paths.  However we stay with the route of the footpath as is heads in a northerly direction .

The path leads us to a spot marked on the map as Kitt’s Grave.  Local folklore is unclear of the origin of the person buried here, however it is widely thought to be either a young girl or a Romany woman who had taken her own life. Therefore, she could not be buried on consecrated ground and with no parish willing to claim her she was buried at the meeting point of three local parish boundaries.  However, it could also be a long barrow, so it is a case of picking whichever tale you prefer.  We walked in these woods last November and tried to locate the grave without success.  We have another look today, but it is not easily identifiable.

The path now follows a hedge-lined route to reach a minor road at Cutler’s Corner. We turn left and follow the road to a crossing of tracks.  The road turns to the left, but we continue straight on in a westerly direction.

We pass a barn with a light aircraft stored in it.  I am not keen on flying and could not imagine a scenario where I would be tempted to get into a plane like this.  It is years since we last flew and that was to go on holiday to Lanzarote.  I enjoyed the winter sun, but hated the flight there and back!

We now cross a minor road and continue on the footpath as it passes Middle Chase Farm and enters a field. We follow the path with the fence to our left and then just before reaching a gate into Stonedown Wood we take a footpath on the left which goes through a gate and goes along the edge of the woodland.

We stay with this footpath as it becomes a hedge lined path and descends to Shermel gate.

There is a junction of five paths and tracks here.  We take the path on the right which leads uphill heading west into Chase Woods.  We stay with this path to a junction of footpaths on a track at the bottom of a valley.  Now we turn left and follow the track through the attractive woodland.

The track reaches houses at New Town and becomes a minor road.  We follow this to a junction where we turn right and head south on Dean Lane.  After half a mile on the lane we ignore a bridleway on the right and then a hundred yards further on take a footpath on the right which heads diagonally uphill.

On reaching the hedge line we turn left  and then after fifty yards take a path on the right leading besides a camp site towards the church at Sixpenny Handley.

The font is said to be Norman and is made of Purbeck stone.

As we leave the churchyard to enter the village we spot an interesting wheel fixed to the wall.  The inscription reads “In May1892 a spark from wheelwright’s shed lit the High Street thatch and the village burned for three days.  So many clothes were sent for the 186 homeless that you could tell a Handley man because he wore two waistcoats.”

The fire resulted in much of the village being rebuilt.  The village website explains that their odd name derives from two medieval hundreds: “Sexpena (meaning Saxon Hill) and Hanlega (high clearing).  Apparently in the 14th century it was known as Sixpenne et Hanle. But later was known as Handley or Handley St Mary.  It was only in the middle of the 19th century that it became known as Sixpenny Handley which is often written as 6D Handley.

We go down the High Street and it is pleasing to see that the village still has a Butchers shop, however the Post Office store is now a private house and next door the Roebuck Inn has closed and permission has been granted to convert it into flats.  I am an advocate of retaining shops and pubs in rural communities, without them the soul of the village is lost.

It is a pity this village could not follow the example of nearby Gussage All Saints who took over The Drovers Arms and now run it as a Community Pub.  However, the positive is that this village have set up a bar “The Penny Tap” in the Sports Pavilion and it gets rave reviews.

We continue down the High Street to pass the Newsagents and then turn left into Dean Lane.  We follow the lane to reach a minor road on the right, Oakley Lane, this is a dead end road, but continues as a footpath on the route of the Hardy Way; a 220-mile route linking locations across Wessex associated with Thomas Hardy.

We stay with the Hardy Way across Oakley Down. The route leads us through arable fields to the A354 which we cross by a garage and the Yew Tree Farm Shop.  The path goes down the side of the garage to reach a field.  Now we head south east across the field to a junction of paths where we turn left.

The path soon starts to descend through the field with cracking views in front of us.

On reaching a track we continue on the Hardy Way to a junction of tracks and turn left still on the Hardy Way to reach Manor Farm on the edge of the village of Pentridge.  Soon after passing the farmyard we take a footpath on the right, still the Hardy Way, leading up a driveway and then heading left across grass the path narrows besides a fence.  It is a gradual ascent to a stile into a pasture field.

The path continues by the fence line and then as the fence turns to the right we continue straight on towards a stile.  From here there are cracking views.

After crossing the stile we continue up Penbury Knoll to visit the Ordnance Survey trig pillar.  I have visited this trig on a number of occasions but it is always worth a re-visit.

From the trig we head north east on a track across the access land.  This track follows the fence to our right and we stay with it as the fence turns to the north.  At an abandoned old hay rake we turn to the right and go through a gate.

We now follow a path along the edge of an arable field and then pass Blagdon Plantation.  On reaching a track we turn right and take the first track on the left which leads to Martin Down and the Borkerley Ditch. This ditch is thought to have been built in the iron age and fortified in the 5th century.  It runs for around 3.5 miles and is an impressive structure.

Our route is now very straight forward, we stay besides the ditch heading in a north westerly direction until we reach the Rifle Butts which remain from when this site was used as an Army firing range. Here we go right to join a main track and turn left to head back up to the car park and our starting point.

Our walk has covered almost fourteen miles.  Once again we have explored a part of Cranborne Chase I have not previously visited.  It will be a few weeks before I’m back here again as I am off later in the week to look after Cholsey Grange CL, whilst the site owners, Ted and Jackie, go away on holiday.