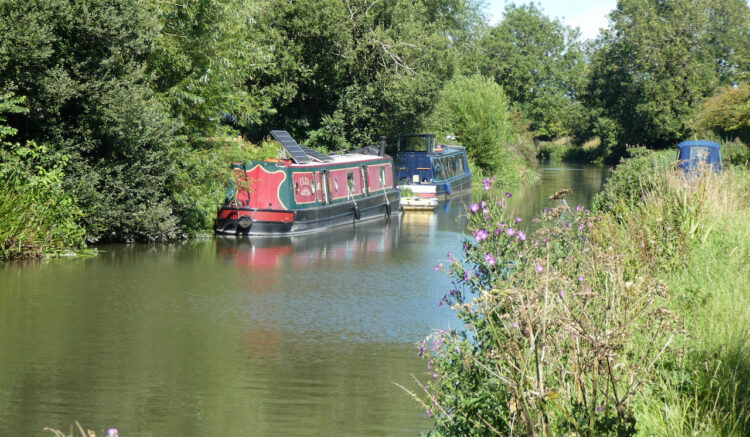 We are nearly at the end of this short trip away, but there is still time for one more walk and an opportunity to bag a new Ordnance Survey trig pillar along the way.  Visiting trig pillars has long been a feature of our walking, for years they were ancillary.  If we happened to pass one along the way that was fine, but rarely did we make a special effort to reach one.  However, a couple of years ago a Twitter buddy suggested I start logging them.  Since then they have become a regular feature when planning my walks.

Once again our walk starts from the pay and display car park in Station Road close to the centre of Devizes.  We leave the car park and turn left to walk up to a mini roundabout where we turn left crossing a canal bridge and then cross the road to take the towpath signed for Devizes Wharf.  As we near the Wharf, which is on the opposite side, we fork away from the towpath going up steps to join a lane with a World War II Pill Box.  This is one of a series of such boxes built along the edge of the canal to form the GHQ Blue Line a section of the General Headquarters Line which compartmentalised the country to thwart the expected German Invasion.

We continue along the lane reaching the cemetery where we make a brief diversion to look around.  This cemetery was opened in 1878 and over the years has been extended a number of times.

Back on the lane we cross the canal bridge and stop to look at Devizes Wharf.  In normal circumstances I imagine this is a must stop spot with its cafe, museum and theatre but today it is quiet.  Back in the days when the canal was in use as a trading route this would have been a major hub for goods coming in and out of the thriving town.

We rejoin the towpath and head east through Devizes.  The Kennet and Avon canal goes between Reading and Bristol, 87 miles of waterway, the section from Reading to Newbury follows close to the River Kennet and from Bath to Bristol is close to the River Avon. It was designed and built by John Rennie between 1794 and 1810.

Like most canals this one suffered competition from the railways and the opening of the Great Western Railway in 1841 removed most of its traffic. By 1852 GWR had taken over control of the canal and increased tolls significantly to persuade the remaining traffic to move to the railway.  Then in 1925 GWR sought to close the canal all together but by then pleasure boats had started to use it.

After World War II the Transport Act 1947 saw the canal transfer to the British Transport Commission, under their stewardship the canal fell into decline with large sections becoming unnavigable.  In 1962 the charitable company the Kennet & Avon Canal Trust was established and they immediately started work on restoring sections and by 2003 the canal was fully navigable again.

We continue to walk through this section of the canal to reach Devizes Marina.

Now the canal heads into open countryside.  Whilst I find it interesting walking towpaths through towns I much prefer it when it is less built up, so this section is a pleasant relief and the towpath is a lot quieter.

At Horton Bridge, with the Bridge Inn besides it, we leave the canal and join the road sign posted to Coate and Little Horton.

This lane heads south, initially following the route of the canal, after passing an overgrown World War II pillbox it leaves the canal. The route now follows the straight country lane to reach Little Horton and continues on to pass the smart looking cricket ground in Coate.  At a cross roads we pass the bus shelter with the telephone kiosk beside it now housing a defibrillator.

Now we continue to head south through the village on the Etchilhampton Road and pass the car park of the New Inn pub, our route is still on the Etchilhampton Road but first we pop up the lane to have a look at the pub for future reference.  I always take the view that if a pub looks cared for outside there is every chance it is well worth popping in.  This is adorned with flowers and looks a delight, so when things are a bit safer we will return here to sample the food and ale.

Back on Etchilhampton Road we continue out of the village still heading south.  The road starts to ascend and we get a good view of Tan Hill and the Alton Barnes White Horse.  It was only a few weeks ago that we walked there whilst staying in Charlton St Peter.

At the brow of the hill we leave the road and take a bridleway on the right which follows a broad grass track heading steadily uphill.

As we ascend there are fine views across the Vale of Pewsey.  Until earlier this year I had not walked in this area, it has now become a favourite local spot.

The path now runs besides a fence continuing up to the top of Etchilhampton Hill.

At the top of the hill besides the path is an Ordinance Survey trig pillar, this is the 212th I have bagged.

From the trig we follow the track descending the hill and on reaching a crossing of tracks turn left to reach a minor road.  Our route is straight across but first I make a quick detour by turning right and walking downhill for a few hundred yards to the junction with the A342 to have a look at the monument on the junction which is a lion on a plinth.  I have driven by this many times but never known why it is here.

The monument commemorates James Long, he lived in Devizes and in 1768 he promoted a new road to connect Nursteed in Devizes to Lydeway in Urchfont.  The route he proposed avoided the steep slopes of Etchilhampton Hill and was therefore a much easier journey for horses, oxen and the drovers.  Local folklore has it that when the clock on St James Church in Devizes strikes midnight the lion leaves the plinth and visits a farm pond in nearby Stert to quench his thirst.

I walk back up the hill to the crossing of paths and find Lynnie and Crosby sat in the shade of a tree.  It is a very hot afternoon and both decided there was little benefit in adding any distance to their walk!

We now head across the road and follow the track down to the A342 which we cross and take the lane into Stert.  In the village we head towards the church and then at a fork in the road go left downhill.  After a few hundred yards the road becomes a track and we follow this down to reach a footpath leading over a stream.

After crossing the foot bridge we turn right and start with the path that leads through Stert Valley with the stream to our right.  On reaching a junction with Sleight Lane we turn left heading towards Sleight Farm.

The harvest is well under way and the dust from the combines billows across the tracks ahead and the tractors coming down the lane show little sign of slowing as they pass.  There is rain forecast for later, but the few seconds it would take to slow to a reasonable speed to pass pedestrians would not make any difference to how quickly the grain is stored.

At a junction of tracks we turn right, thankfully walking away from the fields that are being harvested.

This track leads north towards Devizes and as we near the outskirts of the town we pass a skatepark and football pitches to join Green Lane.  We stay with this road as it heads through a residential area and then becomes pedestrianised.  At a road junction we turn left and follow the pavement to a mini roundabout where we cross to join Wick Lane.  We walk on the pavement besides the lane to reach a junction with the Potterne Road where we turn right and then after a hundred yards take a footpath on the left.

This path brings us to St John’s churchyard and from here we wander into the town.  We set off on our walk in mid afternoon to avoid the hottest part of the day, so it is now early evening and it is pleasant to wander around the town.  Few folk are about so it is an ideal time to look at some of the stunning old buildings.

If we were not in the midst of a pandemic we might have stopped in one of the pubs for a bite to eat and a pint, we have earned it having walked almost twelve miles on a hot day.  But we are being extremely cautious and also should get back to the caravan to pack up for our trip home tomorrow.  With overnight rain forecast we need to get the awning down before it gets wet!