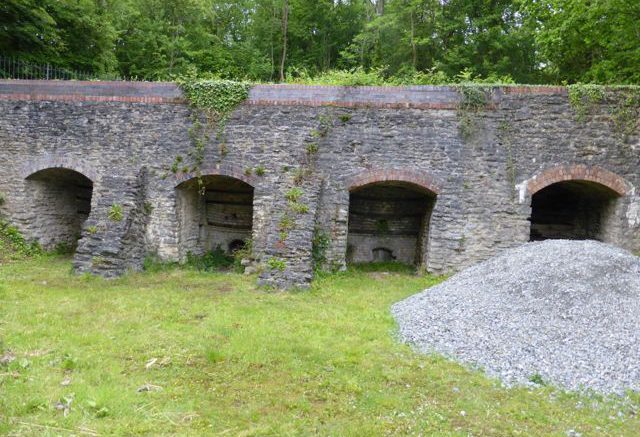 After last year’s travels our outings in the Unicorn have been limited in 2015. We both miss the life on the open road, returning home has meant some compromises and I have been busy with work. However, now it is time to step away from the garden and the keyboard for a few weeks and go on tour.

There are some places that have names that just stand out and ask to be visited. Last year it was the likes of Westward Ho!, Orford Ness and Robin Hood’s Bay, this time around it is Much Wenlock, Haltwhistle and Giggleswick, although to be to be honest Giggleswick is on the list every year!

So we head off for Much Wenlock, the first destination on our travels. This is a place that I have driven by on a number of occasions, once even detouring from the main road to drive through the town. It has been on the list of places to visit for a while. However, on this occasion it is a one-night stop off point as we head for North Wales.

Regular blog readers will know that we normally head for small Caravan Club CL sites, taking a maximum of five vans. Tonight’s stop is at a main Caravan Club site just outside of Much Wenlock, but it does not have the feel of other larger sites we have occasionally visited. This is a compact site with adequate amenities (electric, water and waste disposal) and has the feel of a large CL. On arrival we are told where the best local dog walks are, ideal for us after more than three hours in the car.

From the caravan site we turn left and almost immediately cross the road to take a footpath that goes up a few steps on the opposite side. From here it a steady but not arduous stroll up hill through the woods to reach a clearly defined path on Wenlock Edge. 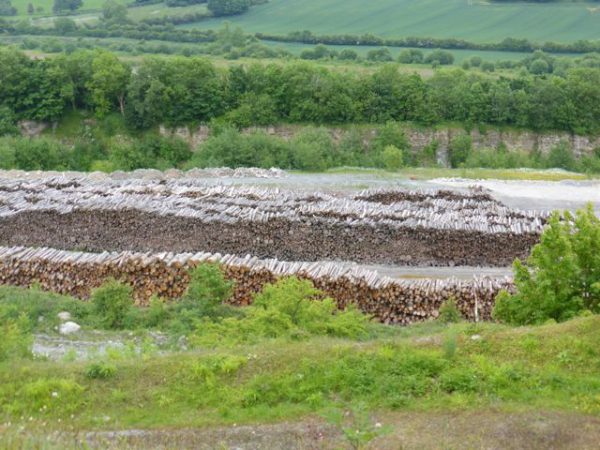 As we walk along the path the expanse of Lea Quarry to our right is revealed. This is an old limestone quarry, the site is now used by a renewable energy company. There are extensive log piles awaiting conversion for biomass woodchip fuel. 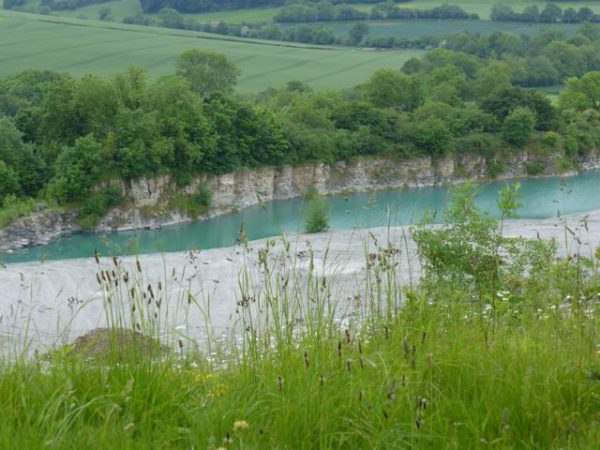 We get a fine view of the Quarry lake and the whole area around Wenlock Edge has an abundance of wild flowers. Lynnie is soon in her element clicking away with the camera. 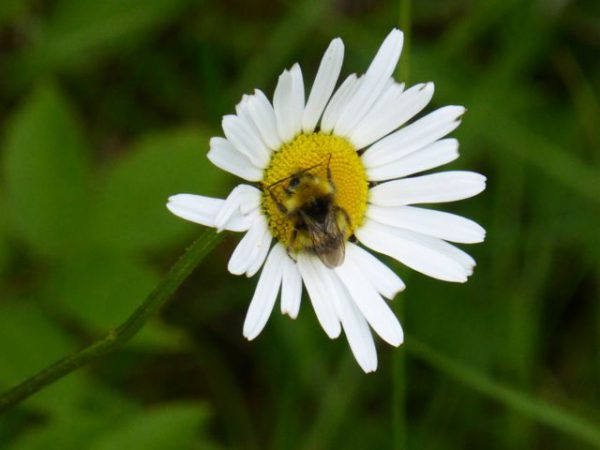 This walk is rather deceptive, there is the quarry to one side and the drop from Wenlock Edge on the other, but from our path neither of these drops are visible, making this ideal walking for a Freddy.

The first clear sign of the drop on our left hand side comes when we arrive at Major’s Leap. This spot reportedly gets its name from being the place where Major Smallman persuaded his horse to jump when the Roundheads were pursuing him. Smallman survived but his unfortunate, willing horse did not. Supposedly a ghostly horse still haunts the area. 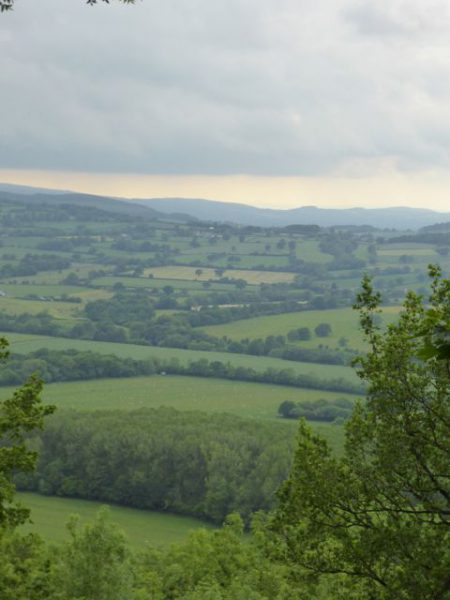 We continue along the path to Blakeway Hollow and then decide to turn around and re-trace our steps. I always find this interesting, because the return journey gives a different perspective. It also provided Lynnie with the opportunity to take more pictures of interesting things she had spotted on the outward journey.

Later a quick internet search came up with a number of references to this chap in other blog sites and of course the inevitable Wikipedia entry. Reportedly John “Mad Jack” Mytton (1769- 1834) could be best be described as a colourful character, born into a wealthy family and living life to extremes. The reports of his behaviour towards horses and dogs (being keen on dog fighting) I find distasteful. Times were different, but nonetheless it seems odd that such a character was commemorated by a long distance bridle path being named after him.

Resuming our walk we wander off the main ridge and back down towards the site planning to look at the Knowle Quarry Lime Kilns. Freddy does like to look at limekilns! As we head down we spy the gunpowder store for the old quarry.
Following the signs we reach the limekilns. 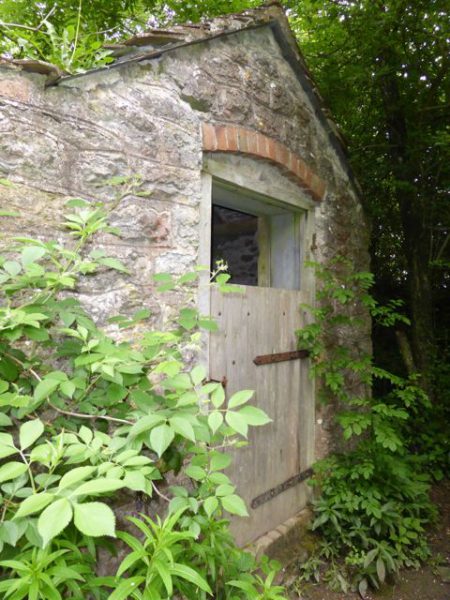 They are an impressive sight and must have been a hive of activity in their heyday. The information boards around the site provide interesting background. 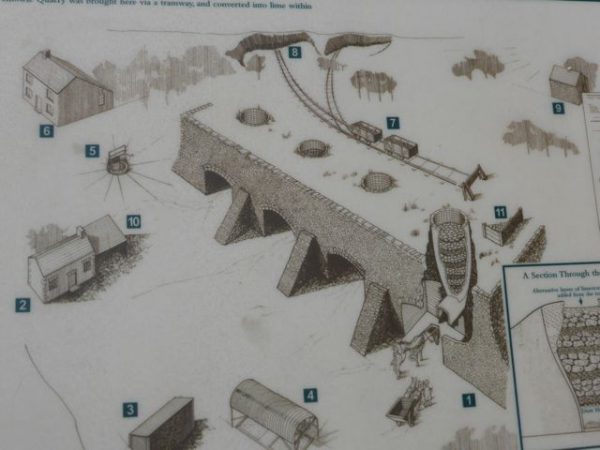 These were ‘running’ kilns, i.e. they operated continuously. Limestone was unloaded directly into the top of the kiln, along with alternate layers of coke. Coke provided the fuel to heat the limestone to a temperature of over 900 degrees Celsius, converting it into calcium oxide or ‘quicklime’. The quicklime clinker dropped to the bottom of the kiln, where it was extracted via the draw hole. It was then ‘slaked’ with water to reduce it volatile qualities, creating a fine powder known as lime. The kilns stopped working here in 1925.

The lime was distributed from Presthope Station across the road. The old station became the caravan site we are staying on for the night.

After a good wander around we head across the road back to the caravan. It has been a stunning stroll packed with interest, it feels good to be back on the road.