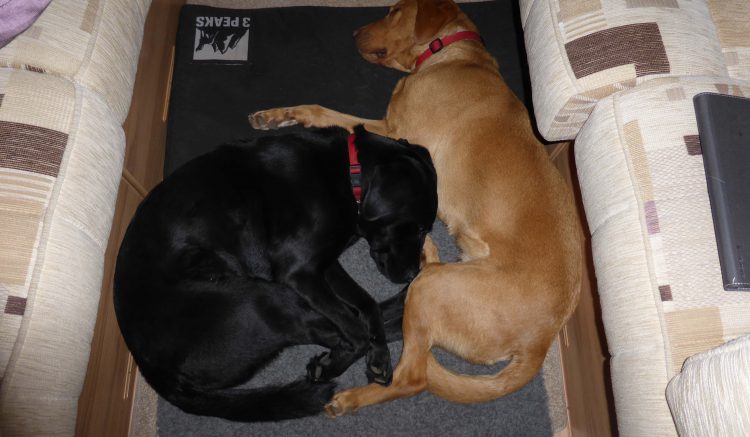 The forecast is for rain for much of the day, with promise of sun in the evening. Therefore we decide on a morning of catching up with blogs and other stuff around the van. Before I settle down in front of the keyboard the boys need a walk.

Leaving the CL I turn left and follow the road to Toll Bar Cottages and then left towards Hubbard’s Hill. There is an almighty clap of thunder the boys don’t flinch. My old Collie, Baggins, hated thunderstorms and used to hide under anything. He was not allowed upstairs in the house but when thunder came, if the doors were open, he would try and steal away under a bed.

I decide to take the route alongside the stream through the bottom of the valley. I imagine that most mornings this area is busy with dog walkers, but not today. Only we three are out in the storm. I assume the weather has kept others away unless one of the joggers I passed earlier has spread the word that there is a scruffy looking chap in ill-fitting shorts walking in the pouring ran with two bedraggled dogs.

This lower path gives a totally different perspective to Hubbard’s Hill. It is readily accessible to people of all ages and must be a popular local amenity when fine. The trustees of Auguste Alphonse Pahud donated Hubbard’s Hill to the town of Louth. He was Swiss and moved to Louth in 1875 to teach German and French at King Edward VI Grammar School. He married a local girl Annie Grant, the daughter of a wealthy local farmer.

Sadly Annie died in 1889 and Auguste could not overcome his grief, he took his own life in 1902. The trustees of his estate bought Hubbard’s Hill to honour his wish to create a memorial to Annie. They established a pleasure garden with lake, a country park and a memorial. A fitting and lasting way to commemorate someone.

Walking into town I pass by an old part of the grammar school. A blue plaque on a weed covered wall reads ‘An old wall covered with wild weeds opposite the school windows.’ These words were written by Alfred Lord Tennyson (1809-1892) he was a pupil at the Grammar School from 1816 to 1820. Researching later I discover that he actually wrote ‘How I did hate that school! The only good I ever got from it was the memory of the words “sonus desilientis aque”, and of an old wall covered with wild weeds opposite the school window’. I can only assume that whoever erected the plaque could not find one large enough for the full text. Surely they would not intentionally have left off the derogatory comment about the school.

Around the corner it is quiet around the church. This has the tallest spire of any parish church in England, it is impressive and stands at either 295 or 300 feet depending on your source of information. Either way it is impressively tall for a church spire. As I walk into the town centre there is the hustle and bustle of local shoppers, a queue outside of the bakers and market stall holders trying to keep their goods dry. I meander past the estate agents, you get a lot for your money around here. Then back up the hill for a cup of tea and a late, cooked breakfast, that’s assuming Lyn has not devoured the local Lincolnshire sausages whilst we were out.

By lunchtime it looks brighter “over Will’s”, so we head for Grimsby to see the docks. On the Louth by-pass, just a few miles after setting off, we spy a caravan dealer. We make a detour, we are after a special purchase. This dealership has a fantastically well-stocked shop, it has previously been voted caravan dealer of the year and you can see why.

A couple of years ago suggesting to Lyn we visit a caravan shop would have gone down like sack of spuds. Now she is practically out of the car before I have parked. We separate, to be honest I could not see where she had gone, and then I here a cry of delight. The girl has found what she is searching for. Sure enough there it is on the shelf nicely boxed up. Lynnie is almost jumping for joy. She has found a caravan washing machine / spin dryer. I try to explain that it is not her birthday until August, but she has her heart set on it. So being a bit of a softie I cave in. (I have made a note in my diary to remind myself that Lynnie has had her present already!)

Finally we reach Grimsby, it has taken us the best part of an hour, it takes us twenty seconds to realise we have made a mistake. Doors locked we head for Cleethorpes a seaside resort close by. Compared to Grimsby this is smart, but not compared to Louth. We spot a pub fully decked with England flags for the World Cup (it will end in tears). At 4.00pm there is an overspill of drinkers on the pavement, we stop at the traffic lights taking care to avoid eye contact.

We think about heading to Mablethorpe, but the sky is black in that direction and sunny over Louth. Back at the Unicorn Lynnie’s new toy is soon out of the box and spinning away.