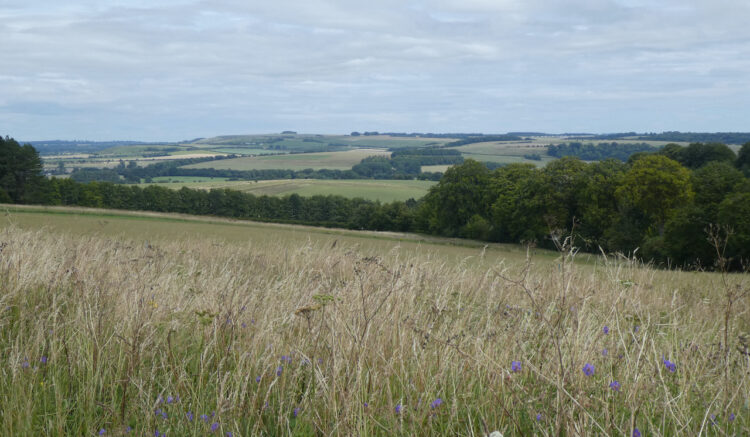 It is interesting that we are staying in the caravan only half an hour’s drive from home and yet it feels like we are far from home in another part of the Country.  After having our travel restricted for so long being in the Coachman again is a bit of a novelty.

We have decided to walk from our pitch at Charlton Manor CL today and on leaving the site we turn right to walk towards the village.  Soon after crossing the River Avon we take a lane on the right and then after a couple of hundred yards fork left to head uphill on a footpath to reach the Charlton Cat cafe. This was a pub and the building dates from the 1820’s, apparently, it was originally called the Red Lion, but by the 1920’s it had become known locally as the Cat due to the poorly painted lion on its sign, so the name has been changed.

We cross the A342 with care and join the track opposite, this is the Charlton Drove and we follow it making a long steady ascent.

The track passes barns and continues on to pass the Charlton Clumps trig pillar.  We bagged this trig on our short walk yesterday so there is no need for a picture today.  Soon after at a junction of tracks we turn right to follow a path besides the edge of the Ministry of Defence danger area.

It was back in 1898 that the army first conducted training exercises on the plain and started acquiring land.  This continued until the 1940’s and now there is about 150 square miles of land with restricted access, or in some parts no access at all because of live firing.

As we head along the track we can hear the sound of firing in the distance and Lynnie seeks assurance that it is safe to be walking here.  I point out that we are outside the restricted area so there is no problem.

Lynnie’s concerns are further fueled when we see signs warning against picking up shells and digging.  I had not planned to partake in either activity!

The route is very easy to follow, we keep on the track with the MOD land to our left and pass Charlton Clumps.  Out to our right there are wide ranging views across the Vale of Pewsey.  In the far distance is the Alton Barnes White Horse.

As we walk the sound of gunfire becomes louder and I reassure Lynnie that we will be perfectly safe.  As we reach a parking area near a hut we bump into a local chap and I mention Lynnie’s concerns.  He helpfully recounts a story of how in 2014 a live shell went off course and landed in a farmer’s field near the Pewsey Vale village of Patney.  This is below where we are standing and about 5 miles from the edge of the army range. According to the BBC’s report of the incident the MOD spokesman said “No one was injured and no property was damaged but all live firing has been suspended whilst we investigate”.  Well that’s all right then!

Still heading along the track we spot soldiers on their exercise on the plain and signs of the shells exploding.  I am surprised that given all the land they have they conduct exercises so close to the edge of the range.  But thankfully today they appear to be firing into the range away from us.

We are now on Urchfont Hill following the route of the White Horse Trail, this trail is 100 miles long and visits all the Wiltshire White Horses.  Early in the year, before the extent of the Covid-19 pandemic was clear I mapped out the route and hoped to identify four or five days in the spring to head off and do the walk.  However, the pandemic has put pay to that, instead I am bagging the horses individually on day long circular walks.

On reaching the B3098 we join the pavement and turn right to walk into the village. and then turn into the High Street and continue to the village pond.  Apparently this was first drawn on a map in 1784 and was in use as a watering hole for livestock until the 1930’s.  It is now purely decorative.

We pass the pond and visit the church of St Michael and All Angels.  Parts of this church date from the late 13th century and the tower was built in the fifteenth century.  Restoration work was undertaken in 1864 and 1900.  It is locked so we are unable to go inside, but like most churches there is a convenient bench for us to stop for lunch.

Resuming our walk we head back into the village, passing the pond and turn left into Friars Lane, we follow this lane, keeping right as it forks, to reach the edge of the village.  After passing a new housing development we continue to the end of the lane on a footpath to reach arable fields.

At a minor road we cross and follow the route of a footpath across a field of corn.  The route is clear on the map, but there is no clear path or way-markers and as we near the A342 there is no stile or gate exiting the field.  It is not clear if the footpath has been closed or just neglected.  I will have to follow this up with Wiltshire County Council and The Ramblers.  Rather than go across the field again we follow its edge besides the A342 to reach Manor Farm where we turn right cross the main road close to a milestone.  Apparently the stone was erected in the 19th century on the Lydeway turnpike.  It has obviously been recently refurbished.

We take a footpath opposite, this soon turns to the north and then to the east.

We stay with it to a three way junction of paths.  Here we take the middle footpath heading south east across arable fields to reach Wedhampton where we turn left on to Green Gate Road and walk through the village to join the High Street.  After passing the village notice board and defibrillator we take the next left into Plum Lane.

At the end of the lane we continue heading east on a footpath across fields to reach a house with an old Victoria Letterbox on its wall on the edge of Connock.

We continue along the lane into the village and then by a notice board on the hedge of a thatched cottage turn left into a lane that soon becomes a path.  We now head across fields to reach Chirton.  In the village we turn left and walk through the village to pass the primary school and then pop into have a look at St John the Baptist Church.

From the church we continue through the village and as the road sweeps to the left into Patney Lane we take a lane in front which becomes a footpath.  Our route is now across fields to reach Marden.

In Marden we cross a minor road and continue east on a footpath heading towards Wilsford.  One of the fields we pass through has a strange crop we have not previously encountered.  Later research reveals this to be quinoa.

In Wilsford we join a road and head east through the village to pass the village hall and church.

At a road junction we take the lane signposted to Hilcott.  After passing the attractive farmhouse at Cuttenham farm we take a lane on the right.

In a hundred yards at a junction of paths we continue south to cross a stream and then head along the edge of a field.  At the next crossing of paths we turn left and follow the path heading east.  To our right on the opposite side of the road is a fine example of Strip Lynchets.  This is an ancient field system created on downland to maximise the use of the land for agriculture.

Now we follow the path along the edge of the field with the Charlton Cat visible in front to the right.

It is only a short distance from here back to the edge of the village where we turn left and wander back to caravan site.  Our walk has covered just over 14 miles and there have been some stunning views over the Vale of Pewsey and through attractive villages.