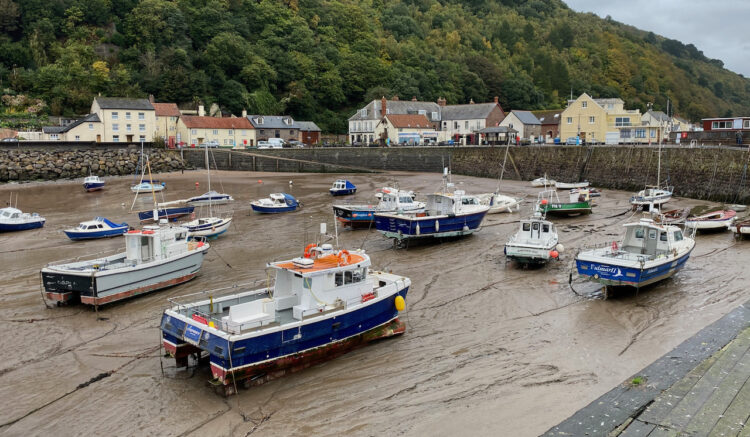 After a week at home I am off with Crosby for a week of walking on Exmoor.  Lynnie has decided  to stay at home with Dexter and catch up with a few bits in the garden.  Also to her the prospect of trudging across the moor in all weather conditions is not appealing.

My base for the week is the Caravan and Motorhome Club site in Minehead.  I am not usually a fan of large sites but this  one is conveniently located and its layout makes it feels like a smaller site.  It does not take long to set up and after a couple of hours in the car Crosby is itching to get out for a walk.

A few days ago I was talking to friends and told them how attractive Minehead harbour was.  Their view of the town was tainted by a day trip one summer when they saw Butlins and quickly left.  So I promised to send them some pictures to show what they had missed.

I leave the site and turn right down Hopcott Road and at the roundabout take a left turn into Townsend Road and then fork right along Ponsford Road.  Reaching the Parade I turn right and continue to the Esplanade where I turn left.

I soon reach Owen Cunningham’s outstanding sculpture marking the start, or finish, of the 630 miles South West Coastal Path.  I would love to be able to do this walk, however, my fear of heights prevents me doing the sections along cliffs.

I continue along with the harbour  to my right.  I have visited this harbour a number of times and the tide has always been out.  I’ll have to check the tide times before my next visit.

On reaching the Old Ship Aground pub I turn to walk along the harbour wall.

There has been a harbour here since the late 1500’s.  Over the centuries the number of  vessels increased with trade routes established to Wales and Ireland.  There was once a small local commercial fishing fleet but this declined in the 20th century and has now ceased.

I wander along the harbour wall with its interesting history depicted by a series of plaques on the wall.

From the harbour I take a look at the Lifeboat Station which was built in 1901.

Now I turn and head back towards the town besides the sea wall.  Instead of turning into the Parade I cross the road and take a look at the West Somerset Railway Station.  This was originally the station for the train connection between Taunton and Minehead which opened in 1874 and ran until it was closed by British Rail in 1971.

In 1976 a group was formed to re-establish the line and now regular steam services run between Bishops Lydeard and Minehead a distance of just over twenty miles.  This makes it the longest heritage railway line in the country.  When we lived in Taunton we often considered taking a trip on the train, but never got around to it.  Perhaps I will have to book it on a future trip here with Lynnie.

From the station I head to the Parade and then retrace my route back to the caravan to start making plans for walking on Exmoor over the next few days.