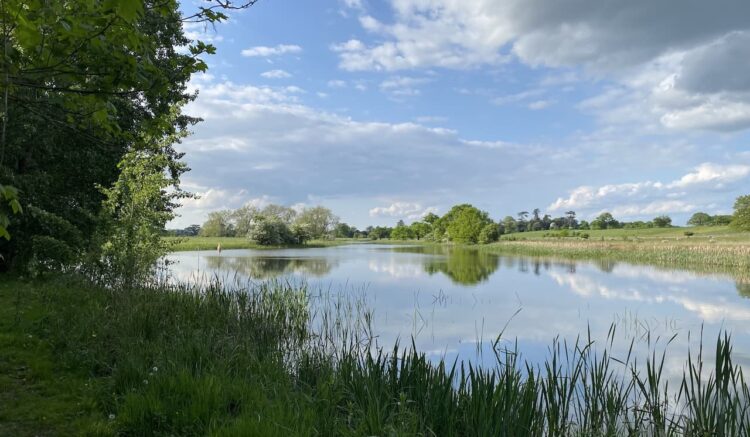 This is the final day of our stay at Goodleigh Hill CL, tomorrow we will be heading back home after  a nineteen night tour.  We have done some cracking walking in the Brecon Beacons, on the Malvern Hills and over the last few days in the Vale of Evesham.  We have bagged a few new Ordnance Survey trig points on this trip and there is still a chance to get another today.

The starting point for our walk is the parking area on the edge of Kempsey Common (Grid Ref: SO865482).  From the car park we head onto the common besides a gate in front of us.

We follow a broad clearing heading east along the edge of the common.  The gorse is in bloom and the air is full of that familiar coconut scent it produces.

As the path levels we turn to the right and head diagonally across to reach the fence line still heading east and soon spot the Ordnance Survey Trig Pillar which sits just on the far side of the fence on the edge of a field in Park Farm.  This is the 312th trig I have bagged.

We had planned to take a path on the right heading alongside Pirton Gorse, however, the field is occupied by frisky young cattle so we decide it would be more sensible to avoid walking through them with the dog.  Instead we continue on the common and after passing a couple of fields on the right we reach a kissing gate. Here we leave the common, turning right to head uphill through fields of pasture to reach Worcester Road where we turn right and pass Kites Farm.  Soon after passing the farm buildings we turn left onto a bridleway that heads downhill towards Swanbrook Farm.

The bridleway leads to a junction of footpaths and a minor road, we turn right and head along the road towards Pirton.  At a junction we turn left onto Hill Road and walk past a farmyard.  We ignore a footpath on the right going over a stile, instead we take one a few hundred yards further on which goes through a kissing gate and then heads south along the field edge.

We stay with the path as it crosses a stream and then continues along the edge of the next field.  This brings us to a junction of paths.  We take the one that heads diagonally uphill across a field towards a house.

After going through a kissing gate we turn right to walk a short distance along the road to reach St Peter’s Church.

Parts of this church date from the 12th century with the tower and chancel being of 14th century origin.  All around the exterior of the church there is evidence of work that has been done over the centuries to maintain the structure.

We had hoped to pop inside to look at the internal features, however like so many churches we have visited in this area it is locked.

Resuming our walk we go back along the road to the kissing gate but this time take a footpath that heads straight downhill and then continues in the same westerly direction through another field.  This brings us into a field with two footpaths heading diagonally across it heading towards Pirton Court.  We take the right fork as this path can be seen clearly through the rapeseed.  At a junction of paths in the field we turn left still aiming for Pirton Court.

The path leads to a stile which we cross and go through a small orchard.

After passing the trees we follow the waymarkers through a five bar gate on the right and then continue along the edge of the next field to pass a house and reach a minor road.  Here we turn right and then very soon reach a junction where we turn left and pass the entrance to Pirton Court.

We continue along the road for a short distance and then take a footpath on the left which heads across arable fields towards Lickmoor Coppice.

The route is clearly waymarked through the trees and leads to a footpath onto the National Trust Land of Croome Park.

The footpath crosses fields to reach a minor road which we cross and continue on National Trust land soon passing a pond on our left.

It is now a short ascent to reach the church of St Mary Magdalene.

This church was built in 1763 replacing a 13th century church that had stood nearer to the main house but was in the way of the redevelopment planned by the 6th Earl of Coventry.  This replacement is a striking building with several monuments, taken from the old church, to various previous Earls and Barons of Coventry.

The monument to the 1st Earl is missing as the 2nd Earl disapproved of his father’s second marriage to a servant.  Therefore he had his memorial placed in St Mary’s Church at Elmley Castle.  We visited that church on our stay in this area in November.

Standing at the foot of the church you have a good view of Croome Court.  Parts of the house date back to the 1640’s.  Changes were made to the original building by the 4th Earl of Coventry, but the major works which resulted in the current structure were undertaken by the 6th Earl of Coventry after he inherited the estate in 1751.

In 1948 the house and parkland were purchased by the Roman Catholic Church and it was run as St Joseph’s Special School.  It was then purchased in 1979 by the International Society for Krishna Consciousness and became its UK headquarters and training college.

From 1984 onwards various organisations owned the property and operated it as a training centre, restaurant, apartments, hotel and golf course.  It was purchased by a charity, the Croome Heritage Trust, and it is now managed by the National Trust.

From the church we follow the footpath at the rear of the church which leads to a minor road where we turn right and walk along to reach the main entrance to the grounds an impressive London Arch designed in 1770 by Robert Adams.

Just after the arch we take a footpath on the right initially heading along a concrete track and then continuing along a grass track.  It is a cracking afternoon, but surprisingly quiet and we don’t see anyone else.

We take a slight diversion from the path to look at the Park Seat which is known as the Owls Nest and was designed by Robert Adams in 1770 as a viewing point to look over the parkland.

Back on the footpath we soon turn right to head downhill towards a weir at the southern end of a lake.

The path now heads across fields towards Westfield Farm with good views of Croome Court away to our right.

At a junction of pats besides the farm we head north along a track which goes past a cattle grid and then runs alongside woodland.  At a junction of tracks we go straight on along a footpath to enter a field.  The path heads diagonally through the crops towards High Green.

On reaching a road we turn left to pass houses and then take a footpath on the right.  It is poorly waymarked, but leads to the farmyard of High Green Farm keeping to the right of the farm buildings and then heads north across an arable field.

At a minor road we turn left and follow the road towards the M5, just before reaching the M5 we take a footpath on the right initially going down a concrete driveway towards a gate.  To our left is a telecommunications mast.

The path now heads north running parallel to the M5, the road is not visible but there is plenty of noise from the traffic.  Away to the right on top of Rabbit Bank is Pirton Castle, despite its name it is not actually a castle, but a folly designed by James Wyatt in 1797 as a gothic ruin.

At a junction of footpaths we stay alongside the motorway, the footpath on the right leads up to the folly.  In normal circumstances we would pop up and have a look, however, we want to get back to the caravan to start packing up for our journey home so decide to leave the castle for another visit.

The path leads into a pasture field below Park Farm.  After going through a gate we take the footpath that continues besides the motorway and soon passes a pond.

Gingerly we go over a cattle grid as the gate besides it is padlocked, this is difficult with a dog.  After cursing the inconsiderate approach of the farmer we reach a junction of paths.  We turn right taking a bridleway heading east onto open access land on Kempsey Common.

We keep the boundary of the access land to our right and continue steadily uphill to reach the point we were at earlier when heading towards the trig pillar.  From here we follow the path back to the car park.

Our walk has covered 10 miles and it has been a good end to our trip away.  It is time to get back and start packing for an early start in the morning.