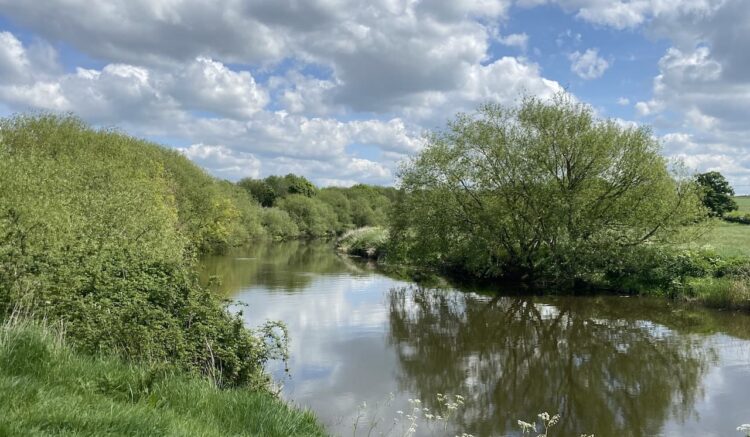 Today we are walking from the caravan again, this time heading out over a route we did last November, but this time we are doing it the other way around with a couple of variations and an additional section alongside the River Avon.

We leave the caravan site and follow the pavement towards Pershore.  Just after crossing the River Avon we turn left on a footpath joining the route of the Millennium Way, this 100-mile long distance path goes between Pershore and Middleton Cheney in Northamptonshire.

There are a network of tracks across the meadows but we stick with the Millennium Way which hugs the side of the river heading in a westerly direction.

After passing besides a copse and crossing a bridge over a stream we ignore a footpath on the right, instead continuing beside the river.

At the next junction of paths besides a footbridge over a stream, the Millennium Way turns to the right, we continue besides the river on the route of the Pershore Bridges Walk this is a five-mile circular walk around Pershore.

After crossing a couple of footbridges the waymarked path turns to the right to head towards houses sat above the A4104.

After going through a kissing gate we turn left and walk on the wide roadside verge and then cross with care at a waymarker  to head into Tiddesley Wood.

We follow the Pershore Bridges Walk waymarkers through the woods.  This area of woodland was once an enclosed deer park owned by the Abbots of Pershore Abbey. In the 1950’s the Forestry Commission took ownership and used it a as commercial woodland and planted coniferous trees.  Now in the ownership of the Worcestershire Wildlife Trust there is a process of clearing the remaining coniferous trees and replacing them with traditional deciduous woodland.

The route is a clear track and easy to follow.  Reaching a crossing of way-marked footpaths we turn left leaving the route of the Pershore Bridges Walk and rejoining the Millennium Way which heads steadily downhill on a wide ride leading to a bridge over Bow Brook.

After crossing the bridge at a fork in the path we leave the Millennium Way and take a path on the left which heads diagonally across a field.

The map shows the path leaving the field and entering an area of shrubland.  In November we walked though that shrub area and there was no clear path, I had hoped that it might have been cleared but sadly it is still overgrown and unclear, so we continue along the edge of the field to reach a gateway where we turn left along a minor road and then after just over a hundred yards we take a footpath on the right.  The fingerpost here appears to have been a casualty to hedge cutting.

The footpath follows a track between arable fields heading towards Besford Court.  At a junction of paths we carry straight on into the grounds of Besford Court.  The original timber framed building was constructed here around 1500.  In 1910 the estate was purchased by Major George Noble who went about reconstructing the building into its current mode under the guidance of architect Albert Randall Wells.

Apparently work stopped in 1912 when the Noble’s separated and they were divorced in 1916.  The following year Noble’s wife married his architect.  The house was never completed or lived in and was sold in its incomplete state and became known as Besford Court Hospital and it was apparently described in the New Catholic Dictionary as a “welfare home for mentally-defective Catholic children, restricted to feeble minded boys aged from seven to twenty-one”.

In 2001 the school closed and even twenty-years later men are coming forward to describe the abuse they suffered at the hands of those entrusted with their welfare.  Following the closure of the school the building was converted into apartments.

We follow the footpath waymarkers which pass a fine arch and then at a junction of paths turn right to walk with a hedge on our right and soon pass a football pitch on our left.

After a stile we cross a minor road and go through a kissing gate into a field.  There are a network of paths crossing this field.  It has recently been sown and the pathways are not clear but we opt for one in a south-westerly direction diagonally across the field towards a property in the village of Besford.

After crossing a stile we continue along the side of a paddock and then cross a wooden fence and then immediately go through a gate.  It is unclear what purpose the fence serves other than to make it more difficult for walkers to get through.

On the road, cussing about inconsiderate landowners, we turn left and reach St Peter’s Church.  This 14th century church is apparently unique as it has the only timber nave in England.  The chancel was rebuilt in stone in the 19th century.

According to the village’s website the interior of the church has important monuments, a pre-reformation rood screen and Jacobean alter rails.  Unfortunately the door is locked so we cannot go in to view them.  I find it hard to understand the policy of some diocese, you would think that people might want to gain access to a church outside of the times it’s open for services.

We go back to the road and turn right and then almost immediately take a waymarked footpath down a track leading to a property.  As the track reaches the house the footpath turns right and goes through a gate the path now forks and we keep to the left to follow the fence line of the property and then enter another field where we go right keeping the hedge on our right and then at the corner of the field go left, still with the fence on our right.

At the next the point when the fence turns to the right we head diagonally downhill across the field towards a gate.  After passing through the gate we turn left along a minor road and walk towards houses.  After about four hundred yards, on reaching houses on the left we take a footpath on the right which goes besides fields and heads towards Defford.  There are good views across the fields towards the Malvern Hills.

After passing a playing field we go through a gate and reach Defford.  Now we go along the road towards St James Church which has Norman origins and underwent a major restoration in the 19th century.  This is another locked church so we have no idea what it might look like inside.

Leaving the church we turn left and walk through the village.  On reaching a junction we turn right into Crown Lane and follow this to reach the A4104.  We cross the road and turn left in front of Defford Garage and then almost immediately take a footpath on the right which goes over a stile besides a gate.

This path goes downhill by a field and then through a wooded area to reach a bridge over a stream. We then go uphill to reach a gate and pass through a field following the path down between hedges to reach a stile into a paddock.  Crossing the paddock, whilst trying to avoid the inquisitive horses, we reach another stile  onto a road.  We cross and enter open access land where we turn right and follow a well-worn path through the meadow towards Eckington Bridge.

Apparently the first bridge constructed across the river here was built in 1440. The current red sandstone bridge dates back to the 1720’s.

From the bridge we turn to the left and take a clear path that heads diagonally across the meadows in the direction of Birlingham.  To our right in the distance is the tower on Bredon Hill, a spot we visited last November.

On the far side of the open access land we join the Shakespeare’s Avon Way, an eighty-eight mile long distance path following the river Avon from its source at Naseby to ins confluence with the River Severn at Tewkesbury.  We now follow this route around fields to reach a minor road where we turn right and then almost immediately take a left on a footpath through a wooden gate.  This path goes close to properties and then emerges on a road at a junction.  We head straight across and stay with the road as it turns into a track heading towards Nafford.

We go through a kissing gate and then across Berwick Brook.

The route continues to a weir on the River Avon.

After crossing the weir we continue on the path to reach Nafford Lock which makes the River Avon navigable at this point.

After crossing the lock we reach the sluice gates on the Avon.

We now head uphill on a track to reach a minor road where we turn left.  As the road bends to the right we go through a kissing gate to follow a footpath across a field on the Shakespeare’s Avon Way.  There are great views across the river from here.

After crossing a footbridge the path continues into the next field and passes a fine dead tree.

At a gate we carry on through a further field, the route then goes to the left through a gate and heads uphill to reach another gate which leads to a road in Great Comberton.  Here we turn left and follow the road through this attractive village.

We continue through the village and then take a footpath on the left shortly before reaching the village War Memorial.  This track leads steadily downhill back towards the River Avon where a couple of barges are moored and their occupants are enjoying the spring sunshine in a clearing.

We now go to the right and pass through a gate to follow a broad grassy track with the river to our left.

At a fork in the track just before reaching woodland we go right heading uphill on the route of the Shakespeare Avon Way.  This passes a field which looks as if it is being prepared as a static caravan park.

After going through another gate we carry on following the path as it skirts the edge of a field and then crosses a footbridge.

On the far side of the field the map shows the route going through the crops, however, it is clear that folk walk the perimeter of the field so we follow their example and turn right and then left around the field to join a track which leads towards Pensham Hill.

The track soon becomes a tarmac lane leading into Pensham Hill where we turn right and follow the road to the private path leading back up to the caravan site at Goodleigh Hill CL.

Our wander in this part of the Vale of Evesham has covered just over eleven and a half miles.  We are heading into Pershore to eat this evening so the timing is just right for us to get spruced up before we go.

You can view this 11.5 mile walk on OS Maps and download the GPX File Here