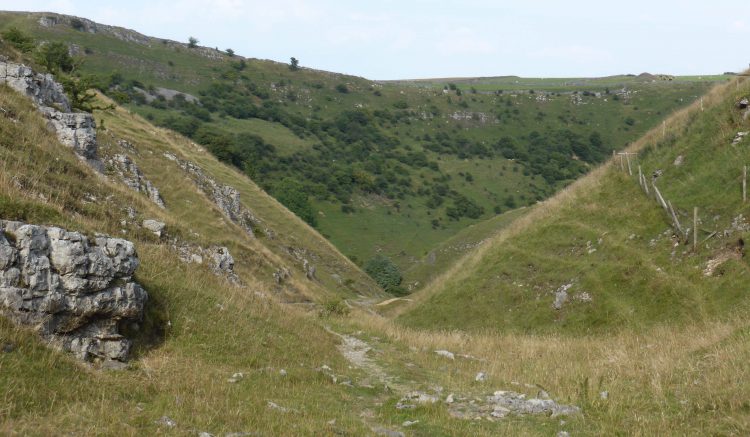 On previous visits to the Peak District we have not been to Tideswell, so today we head there to start our walk. Apparently Tideswell is the second largest town in the Peak District National Park, with Bakewell the largest. Both Buxton and Matlock are bigger but sit outside of the Park boundary.

Tideswell Church is known as the Cathedral of the Peaks, we decide to pop in later and take a look, but first we want to get a few miles under our belts. 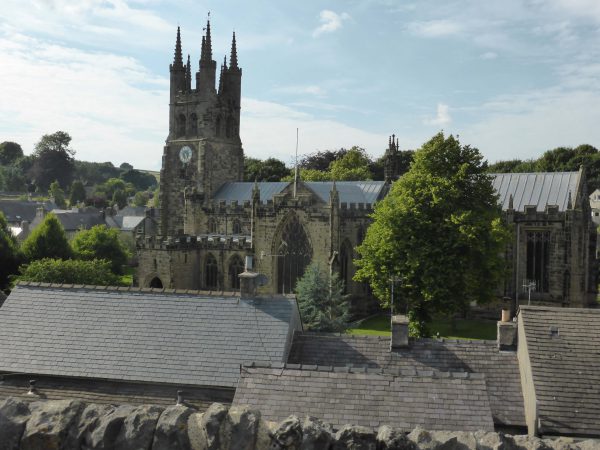 The walk starts opposite The George pub, an old coaching house dating back to 1730. We follow a lane that our walking book says turns into a Jitty, Jinnell or Twichell. When we were in Settle we had a conversation with Carl about the various names for such little lanes. We came up with Snicketts, Ginnells, Cuts and a few others. It is interesting how many variations exist to describe the same thing in different localities.

We walk out of the small town, passing well-stocked allotments and following Church Lane to Litton. This is a pretty little village, the pub is doing a roaring lunchtime trade and there are groups enjoying the sun on benches in front of the pub.

We walk through Litton, past a house with the date 1630 on the front, apparently the oldest in the village, and in another 100 yards we take a wall stile to cross a field. This stile is about six feet high and Crosby is straight up and over. Dexter on the other hand waits to be lifted. It is a few weeks since we have had wall stiles on a walk and I can honestly say that I have not missed them.

Unfortunately at the opposite side of the field is another wall stile so the same rigmarole once again. Then we cross a track and enter a field with clear evidence of recent bear inhabitation. Lynnie strides on to check things out, over the brow of the hill awaiting us are a herd of bears disguised as heifers. Luckily they do not seem bothered by dogs and we stroll through them to the gate and find ourselves going down hill into a valley.

We are in Tansley Dale, a cracking spot that gets even more impressive as we walk down to join Ravensdale. Here we turn right and follow the path along the bottom of the valley. We come to a row of cottages and continue on a track that takes us to a road where we turn left and walk downhill.

At the bottom of the hill is Cressbrook Mill. The word creates images of stark buildings in grim settings. That is not the case at Cressbrook Mill, the building looks like a stately home and has now been converted into smart apartments. William Newton built the mill, he was not the usual tyrannical mill owner and had a reputation for treating his employees well. He became known as the ‘Minstrel of the Peak’ and alongside the mill he built houses for his apprentices known as Apprentice Terrace. 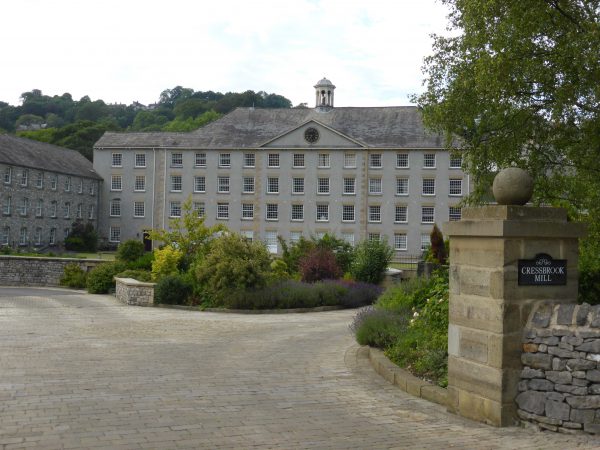 After having a smooch around we wander behind the mill to the mill pond. Another cracking spot and we walk alongside it for a while and then along the banks of the River Wye. I am sure that Lynnie and I walked here about twenty years ago but cannot be positive, in those days there was no thought of blogging or even writing down details of walks. 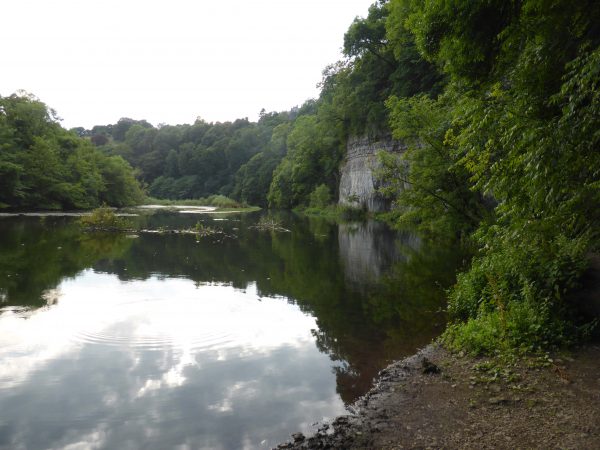 We arrive at Litton Mill, apparently the owner here was not as sympathetic to his employees as William Newton. Again the mill and surrounding cottages have been turned into apartments. From here we take the footpath signed to the Monsal Trail and join it to walk to Millers Dale.

The Monsal Trail is unlike any other disused railway track that we have walked. The views are stunning and occasionally as you approach the edge to get a better view you realise that there is a sheer drop. Many years ago we stayed at the Monsal Head Hotel and walked stretches of the trail, it was a great holiday.

At the sign for Millers Dale we go steeply down and cross the river, then the busy B6049 and take a lane on the left that climbs steeply uphill. A couple of months ago such a climb would have required at least two stops, but not now that we are both ‘fit as butcher’s dogs’. We follow the lane all the way back to Tideswell and don’t see a vehicle for the three miles of the wander.

Our walking book states that the walk is 7 miles long, but we estimate it is closer to 9 miles. Either way it is a great afternoon and we decide to head back to the Unicorn for some refreshment to replace the lost fluids. It is important to keep appropriately rehydrated in these warm conditions. My chosen rehydration liquid at the moment is a couple of bottles of Marston’s Double Drop. It certainly does the trick. Cheers. 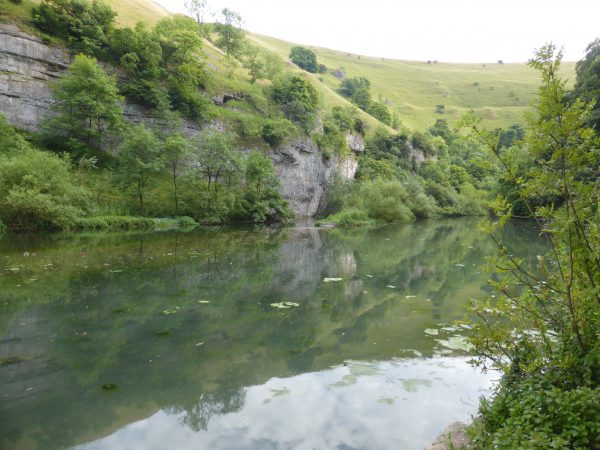