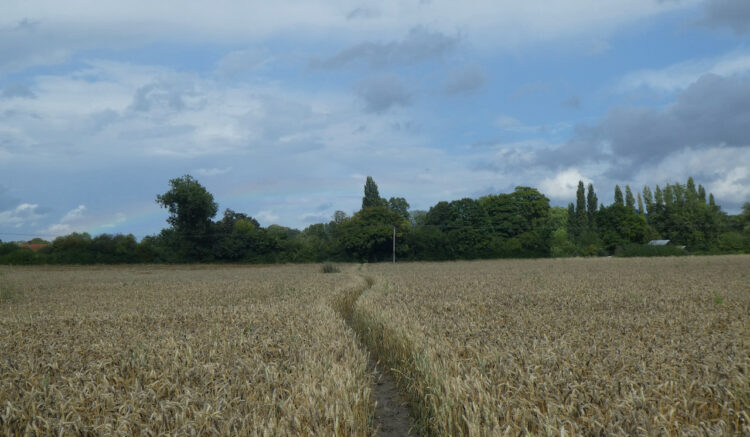 After a week on my own at Cholsey Grange I popped home at the weekend to pick up Lynnie.  She has been busy maintaining the garden and keeping an eye on Dexter.  He is struggling these days and cannot walk far.  Sadly his arthritic joints make it difficult for him to get in and out of the caravan so whilst Lynnie joins me, Dexter goes on his holidays at our next door neighbours.

It is clear from Dexter’s turn of speed as he heads to their front door that he would rather spend a week with Alan and Val than be away with us!  Like most dogs and all Labradors Dexter is a dog that thrives on company.  He always has a warm greeting for anyone he meets, usually on the assumption that they might have a biscuit in their pocket! So not having to share someone with Crosby for a week is ideal for him.

From the church we turn left into Church Lane and follow this past Monks Staithe the house where the aviator Amy Johnson lived between 1937 and 1939.  Johnson is famous for being the first woman to fly single handed from England to Australia, something she achieved in 1930.  The 11,000 mile journey took her nineteen days to complete.

During World War II she joined the Air Transport Auxiliary transporting Royal Airforce planes around the country.  It was whilst transporting a plane from Prestwick to Oxford on 5th January 1941 that she came down in the Thames Estuary and died.  Mystery surrounds how she ended up in the water.  Initial reports said she ran out of fuel, but later accounts suggest she was shot down after being mistaken for an enemy plane.

The footpath continues past houses and a playing field and then reaches a railway line.  We cross with care heeding the signs to “Stop, Look and Listen”.  On the far side of the railway we turn left following the fence of an industrial unit to reach a field.  Here we turn right and follow the path along the edge of the field.

The path leads over a footbridge and through trees and then carries on across fields towards Longwick.

Soon after we pass an old milestone.  It’s presence suggests this was an old turnpike road.

After passing the Post Office and a set of traffic lights we turn left at a crossroads to walk along Walnut Tree Lane.  This lane leaves the village and becomes a track under a railway bridge.  The route then follows a clear path to skirt around fields to reach Mill Road.

We continue along Mill Road for a few hundred yards and then take a footpath on the left to enter a field.  The footpath leads to Sandpit Lane where we turn left and walk a few hundred yards to the site of the old Bedlow railway station which has been converted to a house.  This station served the local community from 1862 until 1963.

Our route takes a turning on the right just before the old station to follow the route of the now disused Wycombe Railway Line.  This line connected Maidenhead and Oxford, construction started in 1852.  The section of line between Princes Risborough and Thame was completed in 1863.  It operated passenger services for one hundred years until 1963 when it became a victim of the “Beeching cuts” which closed over 5,000 miles of track.  The line did continue to operate freight services until 1991 and this section was converted into a footpath known as the Phoenix Trail.

The Phoenix Trail is a 7-mile route between Princes Risborough and Thame, we are only going just over half a mile to reach a footpath on the left.  I originally planned to walk further along the trail but we hear rumbles of thunder and are not keen on being caught in a storm.  The footpath crosses a field, I suggest we reach the cover of trees on the far side and don our waterproofs.  Then the rain starts and we are quickly taking leggings and coats from our rucksacks.

We follow the path across fields to reach a lane, Forty Green, here we turn left and follow the lane towards Skittle Green.  This is a very quiet rural lane and as we walk along the sky clears and the rain passes.

We stay with the lane to pass through the few houses at Skittle Green and continue on to reach the B4009 which we cross and turn left for  a few yards before turning right into West Lane with a signpost for the Lions of Bedlow public house.  We follow this lane to reach a green with the Lions pub standing beside it.

Turning left we go along Church End to reach the Romanesque Holy Trinity church which dates mainly from the 12th and 13th centuries.  Apparently the inside is impressive but it is not open so we will have to return another day.

From the church we continue through the village to a road junction and then turn left into Perry Lane.  This road heads downhill and then we turn right on a footpath along a track besides Forge Cottage.  Along the track we pass a collection of old farm machinery.

The path then continues besides a hedge to reach a track where we turn left and then within fifty yards take a right to cross fields towards Horsenden.

We pass  Manor Farm and then make a brief diversion to pop into look at the he 15th century St Michael and All Angels church; unfortunately it is locked.  According to the website this church holds an interesting place in medical history. A past rector, Edward Stone, discovered that chewing willow bark helped his rheumatism.  In 1763 he reported his finding to the Royal Society and it was later discovered that the active ingredient was salicylic acid, which is now better known as aspirin.

We continue along the minor road through Horsenden to pass playing fields for the local football, tennis and cricket clubs.

On reaching a railway bridge we cross and then turn left into Picts Lane and follow this to reach the B4444 where we turn right to head back towards Princes Risborough.  This road leads into the A4010,  we follow the pavement to reach the centre of Princes Risborough.  At the junction of Bell Street and High Street we stop to look at the memorials to aircraft that crashed locally, they are reported on the local council’s website.

“On 30th January 1943 a Royal Air Force (RAF) Avro Anson Mk1 serial no. L7964 was on a Night Navigation Training exercise from the Central School of Navigation, flying from RAF Cranage, Cheshire. The weather conditions were poor and at 0250 hrs the Anson crashed at Longdown Farm near Princes Risborough.  All four crew members died.”

“On 17th December 1943 an RAF Supermarine Spitfire Mk. VB serial no. AD315 of 287 Squadron, was flying from RAF Ford, Sussex on an Anti-Aircraft Co-operation course. The weather conditions in the area were very poor, the area was covered by low cloud base and there was dense fog below it. At 1515 hrs the Spitfire crashed into Green Hailey near Princes Risborough.  It is thought the pilot decided to attempt to break from the low cloud in order to map read back to RAF Ford. The Spitfire flew into trees on top of the hill killing the pilot.”

“On 21st October 1944 a United States Army Air Force (USAAF) Douglas C-47A Dakota took off from Grove Airfield, Oxfordshire. It was flying supplies to Stansted, Essex for an onward flight to France. The weather conditions were very poor, low cloud base and fog. At 1030hrs approximately 15 minutes and 29 miles from Grove, the aircraft crashed at the top of Kop Hill, near Princes Risborough, killing all five crew members.”

We now walk along the High Street to reach the Market House, this was rebuilt in 1824 as a Cornmarket by the Lord of the Manor, John Grubb.  The upper story is a meeting hall which over the years has been used variously, including during World War II as the Control Centre for the local Air Raid Precautions.

From the Market Square we head along Church Street back to our starting point in the car park.  Our walk has covered just over nine miles.  It was curtailed by the rain, but it has been an interesting afternoon wandering about.