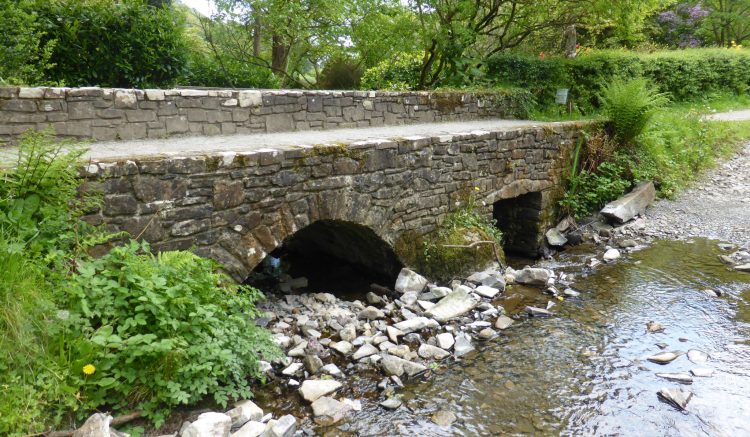 Lynnie’s back is still bad, it is showing slight signs of improvement, but not enough to allow her to join the dogs and I for a jam about. So once again Dexter, Crosby and I are exploring some of South Pembrokeshire without her.  When on our travels I occasionally walk without Lynnie, (normally when I admit to the intended route exceeding fifteen miles!), but to be out on my own for so many consecutive days is unusual. The walking pace tends to be slightly quicker, because there are fewer stops for taking pictures of sheep or flowers, but I do miss the obscure conversations we have whilst out and about.

Today’s starting point is the car park in the centre of Amroth. It is a Sunday morning and this is a popular spot, but I am confident that once I have walked a couple of hundred yards out of the village I will be on my own.

From the car park I head towards the seafront and turn left at the Amroth Arms walking along the pavement in an easterly direction. Going over a small hill there are fine views of the beach with the tide out. 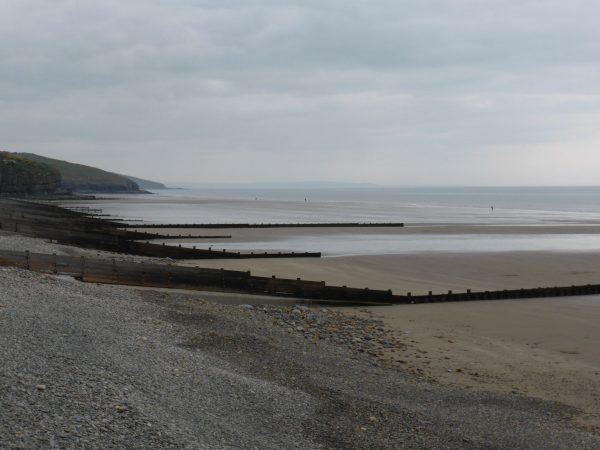 Dexter and Crosby are keen to get down there; it is difficult to explain to two 25-kilo dogs that this is not part of our plans. But eventually we are on our way soon passing Amroth Castle.

It is difficult to see much of the castle from the road as the surrounding wall obscures it. The current castle is an 18th Century rebuild of an earlier version constructed in the 15th century. It has had various uses over the years, initially being a private residence and then between 1851 and 1856 a Dr John Howard Norton acquired it for use as a lunatic asylum, between 1904 and 1923 it was the home of the shipping magnate Owen Colby Phillips owner of the White Star Line.

The White Star Line owned the ill-fated Titanic, which sank on 15 April 1912 on her maiden voyage from Southampton to New York. The sinking of the Titanic caused the White Star Line to reintroduce the Majestic back into service.

Over the winter months I have been doing some research into my family history. My paternal grandmother boarded the Majestic on 2nd July 1913 in Southampton and travelled to Ellis Island, New York to be reunited with my grandfather who had emigrated to America to find work. She had just turned twenty-one and until then had spent her whole life in the St Mary’s district of Southampton. Sadly she died twenty years before I was born, whilst my father was still small, so it is impossible to know her thoughts as she set sail from her home port.

I digress, back to Amroth Castle, in World War II it was requisitioned as a troops barracks and then in 1969 converted to holiday accommodation with a caravan park in the grounds. 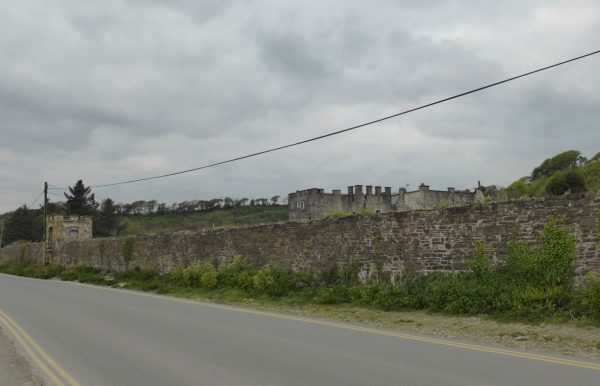 My walk continues along the road and after passing the New Inn carries on up the hill. I consider joining the coastal path, but I am concerned it might be close to the cliff edge and without Lynnie to scout ahead for me I decide staying on the quiet road is the better option.

After half a mile I take a footpath on the left going over a stile into Hannah’s Plain Caravan and Camping Park. The path crosses the field with the hedge to the left and then goes over another stile into Little Trelissey Wood. 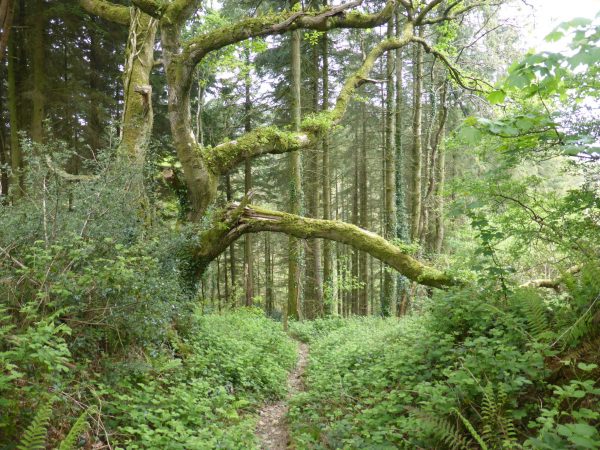 I follow the way markers and I am soon wandering along a forestry track. I become absorbed in birdsong and follow the path without concentrating. I find myself on top of a hill and realise I have not seen a way marker for a while. I look at the map and can’t work out how I missed the footpath so log onto the OS Maps App on my phone, this soon has be heading back down the forestry track to the stream I had been walking along and then I see the path on my left (which originally should have been on my right) as it crosses the stream on a wooden footbridge. 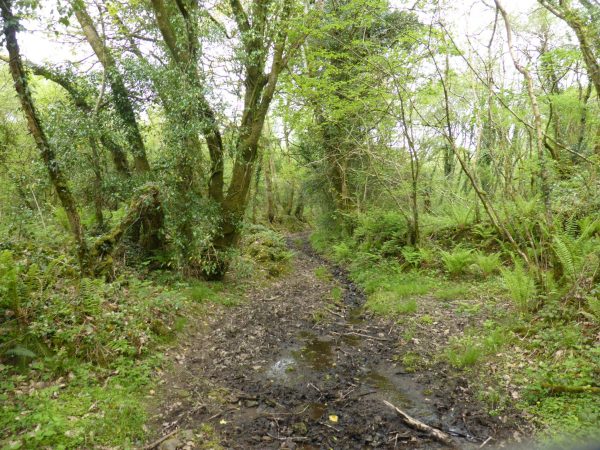 The route continues up a track, initially a bit muddy as the stream runs through it, but soon I am through gates into open pasture. The way is clearly marked as I approach a farm at Ledgerland. The path goes through a gate into a field and as I enter the lady of the farm greets me warmly. I go about fifty yards before a herd of young bears at the bottom of the hill take an unhealthy interest in us. Experience has taught me that in such circumstances the best route is the quickest way out. So I turn and briskly walk back through the gate.

The lady tending her garden is understanding and invites me to take the safer route through the yard and up the farm drive, her husband joins her and we stand and chat for five minutes. It is always refreshing to meet folk that are welcoming when you enter their land.

My route carries on up the drive and joins a single track road, after quarter of a mile I turn right onto a bridleway and then after a few hundred yards the bridleway turns left at right angles and soon joins a minor road where I turn right to walk down to Llanteg. Here I cross the busy A477 to join a lane.

My route is now on minor roads for a while, after quarter of a mile I turn left at a junction and then follow the road for over a mile. The fields are a hive of activity as farmers are busy silage making but I do not encounter any vehicles on this quiet lane. At a junction with a wider road I turn left passing Little Newhouse and then turn left again to pick up a minor road heading towards Longstone.

On entering Longstone I take the left turn and walk along the lane that I was on a few days ago, then heading west but today I am heading east and follow this as it sweeps right to join the A477. Again I cross with care and join the path on the opposite side, this soon leads to Craig-y-borion farm track. 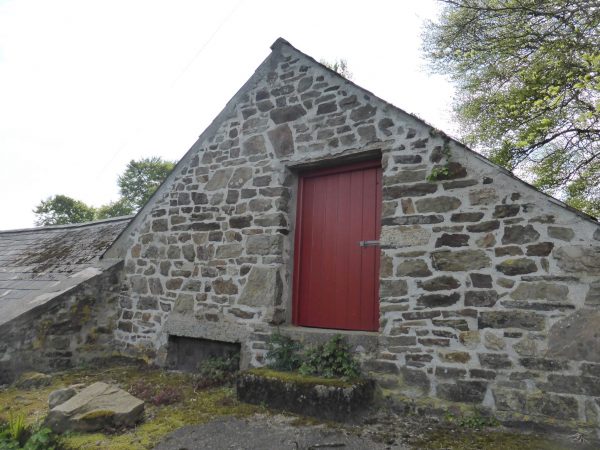 Passing through the farmyard I stay on the footpath as it goes downhill through Craig-y-borion Woods to reach the road and turn left to walk towards Colby Lodge. 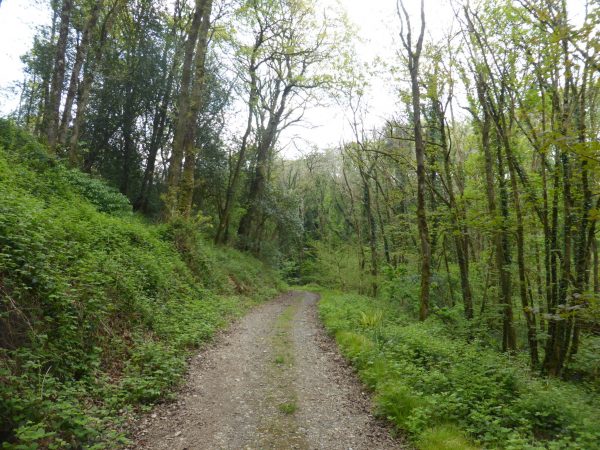 It is a warm afternoon and both dogs are keen for a drink when we reach the stream and bridge at Colby Lodge. 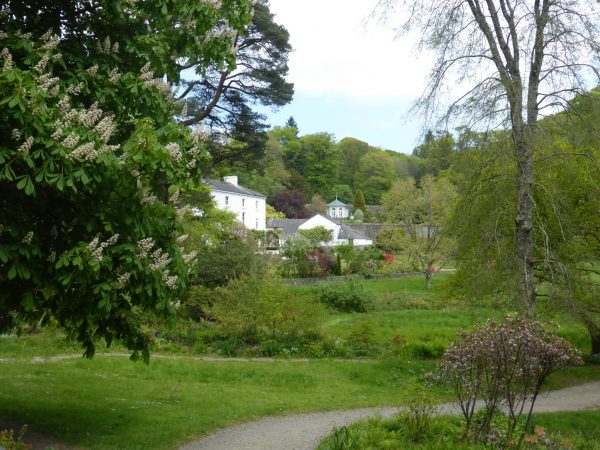 My route now follows the footpath through Colby Gardens and then back to the car park at Amroth. It has been a stunning stroll (apart from losing my way in the woods and the encounter with the bears). I have covered just over nine and a half miles and I am now ready for a cup of tea. Hopefully Lynnie will feel up to a bit of a walk later in the day. 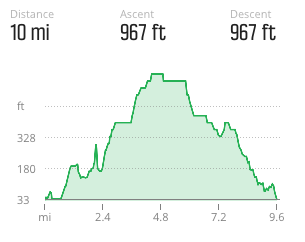