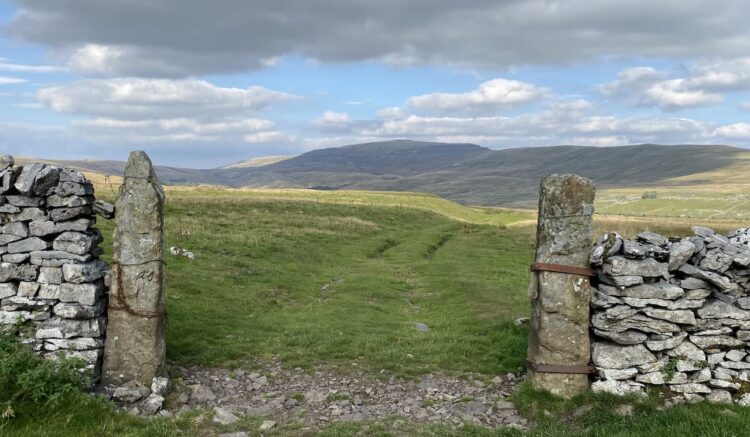 My quest to find new walks for Lynnie and I to undertake sees us back in Ingleton today.  I have planned a route which will enable me to bag a new trig and also take us to a few spots we have not visited for many years.  We start from the car park in Ingleton located by Ingleton Community Centre and Library and also home to the Tourist Information Centre.

We leave the car park to walk into Ingleton and after passing under a disused railway bridge fork left on a road heading downhill following a signpost to the Waterfalls Walk.  We soon reach a junction and turn left to pass the Ex-Servicemen’s Club and then cross a bridge over the River Doe.

After crossing the bridge we turn right beside the Bridge End Guest House into Oddies Lane.  This lane heads north out of the village and soon starts to ascend, initially gradually but soon it is a bit of a calf burner. As we near the top we get a view of the disused quarry at Meal Bank. This quarry has not been used since 1909, but in 1868 the then owners constructed a Hoffman Kiln which over the years was developed to have eighteen entrances and is seventy metres long.

I have previously visited the Hoffman Kiln at Langcliffe but must visit the quarry to view this one.  It is now scheduled as an ancient monument.  Apparently the site has been transferred by the Council to the Yorkshire Wildlife Trust.

A bit further along the lane we spot Ingleborough peaking over the hill in the distance.

We now stay with the wall-lined lane as it heads north towards Twisleton Scar End.

As the road reaches the driveway to Twisleton Hall we stay with Oddies Lane and continue until we reach a footpath on our left opposite the entrance to Falls Park at Beezleys.  To our right is the vast Ingleton Quarry.  This quarry is operated by Hanson and produces 350,000 tonnes a year of gritstone aggregate for road surfacing.

The company blurb talks of the geological interest of the site and how they will restore it when the workings are completed.  Apparently the void will become a deep water pool and the upper benches will be planted with trees and shrubs. I am a man of simple brain, but I can’t see how this counts as restoration, which I always understood to mean ‘restoring something to its original state’.

We take the footpath on the left and follow the way-markers towards Twisleton Hall.  We meet a number of people as we go along and then realise that this public footpath links the two sections of the private Ingleton Falls walk.  After passing the buildings at Twisleton Hall we go through a gate and continue along a track underneath Twisleton Scar End.

At a fork in the track we keep left to stay on the track besides the wall. Then to my surprise we spot an Ice Cream van in front of us.  When Lynnie is flagging on a walk I frequently tell her there is an ice cream van around the corner, but of course there never is.  She is not going to let this opportunity pass.

After going through another gate we continue along a walled track and pass the entrance to Thornton Force and Pecca Falls on the private Ingleton Falls walk.  Many years ago when the children were young we started the Falls walk on a busy day in the school holidays.  The signs stating there were steep drops and risk of fatalities if you ventured from the narrow path coupled with my vertigo were enough to turn me back.  It appears that accidents are now rare but I am not tempted to revisit.

Continuing along the track we reach a footbridge over the River Twiss.

After crossing the river the track leads to a minor road where we turn right onto Thornton Lane.  Our route now follows this lane for two miles through Kingsdale.  It is a fine day and as we head along below Keld Head Scar and then Green Laids Scar on our left, away to our right are fine views of Whernside.

After just over two miles on Thornton Lane we reach a gate on the left leading to Yordas Wood and Yordas Cave.  The rocks beneath the cave are a perfect spot to stop for lunch and admire the view.

Refreshed from our lunch we take a slight detour to wander up and look at the entrance to Yordas Cave.  This old show cave is now a popular spot with cavers and potholers.  I am not keen on caves and do not want to venture in with Crosby as we can hear voices echoing through the chambers.  Apparently as far back as the 1750’s folk would visit the cave and it became a show cave in the 1800’s.

Our route takes us back down towards the gate and then on a path to the left of Yordas Wood.  This rises steeply towards Bullpot Bank.  After crossing a wall on a ladder stile we turn left on a path running besides the wall.  Stopping to look north up the valley the remote nature of this spot strikes us.

I had planned to seek a route from here to ascend the escarpment to our right to bag Gragareth trig point, however, Lynnie makes it clear that despite having an unexpected ice cream she has no intention of tackling the steep ascent.  I am content with this as it will be one I can pick up on another day.

Instead we head in a south westerly direction  along a clear path leading through a succession of fields.  The map is littered with references of shake holes, caves and pot holes.  Experience has taught us that pot holes in this part of the country rarely have any fencing and sometimes can be deep.  However I am still surprised when the path takes us right by the top of Jingling Pot.  This is the entrance to a 148 feet sheer drop.

Continuing along the path we pass through a gate and then reach the Rowten Pot, another huge pot hole, one of a number of entrances to a 17-mile long cave system in Kingsdale.  The thought of being underground in caves for 17 miles is beyond my comprehension.  I view the entrance from a distance!

Staying with the track we continue heading south on what is marked on the map as Turbary Road.  Apparently the word Turbary means the ancient right to cut turf or peat for fuel.  Apparently this was the route the commoners used to access the moor to gain their fuel.

We take a slight detour from the path to look at the fenced entrance to the Kail Pot.

After another gate we continue along the Turbary Road with a drystone wall to our right.

Just after the end of the wall we turn left to leave the track and follow a path heading south across the access land heading over North End Scar.  The path sweeps to the right to descend into the scar.

We stay with a grassy track turning south and heading towards Tow Scar and then soon leave the path to head up towards the Ordnance Survey Trig Point on the right.  This is the 270th trig I have bagged.

From the trig point we head south east steadily descending to rejoin the grassy track close to a stone wall.  In front of us is a cracking view across the Dale towards Ingleborough.

We stay with the track to continue descending across rough pasture land to reach a gate where we rejoin the Thornton Road and continue steadily downhill.  At a junction with a lane we stop to look at a toposcope.  At various times on our walk today we have had glimpses of Heysham Power Station and Morecambe Bay and speculated how far away they were.  The toposcope provides the answer with Heysham being 20.5 miles and Morecambe 15 miles away.

We continue on Thornton Lane heading towards Thornton in Lonsdale, we plan to wander into the village so ignore a footpath on the left close to Thornton Hall which would be a more direct route back to Ingleton.  We have two reasons to visit the village the first is to see if the Marton Arms is still operating, we used to visit the pub many years ago with our friend Julie.  We have happy memories of being there so are pleased to see it is still open.  I am tempted to have a sharpner, but we are going out in Settle this evening and Lynnie suggests I wait for a pint.

The second reason for going to the village is to have a peak at the church and see if we can spot an Ordnance Survey benchmark.  We are not disappointed, the one on St Oswald’s church is unusual and despite having seen over 500 of these I can’t recall seeing another like it.

St Oswald’s Church tower dates from the 15th century with most of the church being rebuilt between 1868 -70.  Apparently a fire gutted the church in 1933 and it was rebuilt again in 1934-35.  The website for the church reports that the author Sir Arthur Conan Doyle was married in St Oswald’s, but it neglects to mention to whom he was betrothed!

We continue through the village heading towards Ingleton and reach a bridge over a disused railway line.  This was the Ingleton Branch of the North Western Railway and connected Ingleton to what is now called the West Coast Mainline, close to Tebay.  Passenger services on the line ceased in 1954 and the line finally closed in 1967.  Of interest to me is another unusual OS benchmark.

After crossing the bridge we fork left on the road and pass the entrance to Meadow Falls Campsite and continue along the road to another junction.  Here we keep straight ahead and continue downhill to arrive in Ingleton at the railway viaduct.

This was built between 1848 and 1860 and is an impressive structure. However, it was fraught with controversy, initially North Western Railway (NWR) was given permission to build the route.  However, they fell into financial difficulty and the Lancaster and Carlisle Railway (L&CR) agreed to build the viaduct and branch line.  By the time the viaduct was completed NWR was owned by Midland Railway and L&CR was owned by rivals London and North Western Railway. The two companies were such committed rivals that they would not share a station so another was built on the other side of the viaduct.  This sounds okay, but passengers wanting to make a through trip were not able to cross the viaduct, they had to disembark and haul their luggage the one and a half miles.  It was not until 1923, when the two rival lines merged, that the first passengers were able to make the through journey.

We continue on the road to pass the entrance to the Ingleton Falls walk and then cross the River Twiss and River Doe to retrace our steps back to our starting point.  It has been a cracking day for a walk and we have covered eleven miles with Lynnie having the added bonus of an unexpected ice cream along the way.