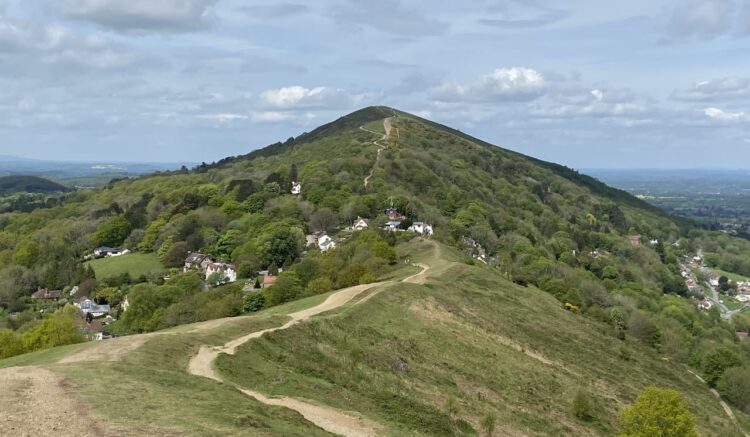 After our walk at the southern end of the Malvern Hills yesterday we have decided to explore the northern end today.  When planning this trip I had not realised it was the Royal Horticultural Malvern Flower Show this week.  This means it is best to avoid heading anywhere near the County Show Ground at the weekend.

In November we walked part of today’s route, but on that occasion we started close to Malvern.  Today we decide to start our walk, like yesterday, from the British Camp car park (WR13 6DW).  Leaving the car park we cross the busy road and look at the decorations around the Wynds Point Spout.

Well dressing is a long standing tradition in these parts.  Apparently the first recorded event took place back in 1870 and continued for a number of years before dying out.  The idea was reintroduced in 1993 and this year over 55 of the 130 spring and well sites on the hills are being decorated by local school children.

As we head up the hill towards the junction of the A449 and B4232 we are passed by a familiar car.  It is our neighbours from across the lane back home, they are heading to the flower show.  We knew they were in the area but it is an odd coincidence that our paths should cross.

At the junction with the B4232 we turn right and walk besides the hotel.  We are going to head up to join the ridge at Wynds Point, there are a number of options and we take one that gradually ascends through an area of Bluebells in front of some benches.

At a junction of paths we go to the right and make a short steep ascent to reach the top of the ridge.  This is not the last of the uphill walking, but it has taken us to a point where we can see either side of the hills and the clear route in front of us.

It is our intention to walk along all the summits on this northern section of the ridge and then pick a less strenuous route for our return to the car park.  So we follow the broad path as it heads north towards Black Hill.  To our right we look over the County Showground with all the marquees set up for the flower show.

After going over Black Hill the next summit looming in front of us is Pinnacle Hill.

The path we are taking along the ridge follows the route of the Shire Ditch, this forms  the boundary between Herefordshire and Worcestershire.  Apparently in the 13th century, the Earl of Gloucester was granted the hunting rights to the east of the Malvern Hills, but he kept popping over to the west side onto land owned by the Bishop of Herefordshire and was accused of trespass.  After a hearing which the Bishop won, the Earl fortified the shire ditch so that his livestock could not stray to the west.

Staying with the clear path we go over Jubilee Hill and Perseverance Hill and then start to descend into Upper Wyche.  Here the Wyche Spring Well has also been dressed.

From the bench besides the well we cross the road to join Beacon Road which heads uphill to pass a car park and then continues upwards as a pathway.

The path leads us to a stone structure with waymarkers, it shows the location as Gold Mine.  Apparently back in the reign of Elizabeth I small quantities of gold were extracted from these hills though subsequent efforts to strike it rich have proved fruitless.

Now on the ridge we head north over Summer Hill towards the Worcestershire Beacon which has a trig point besides it.  We bagged the trig last November and had been here previously many years ago in our pre caravanning days.  That time we stayed at a quirky bed and breakfast, it was prior to online booking and at a time when we would turn up in a town and drive around looking for somewhere to stay.  We had some great times and stayed in some interesting places the likes of which would not survive in the current world of online reviews for everything.

The Worcestershire Beacon is the highest point in Worcestershire and it has a toposcope erected in 1897 to celebrate the Golden Jubilee of Queen Victoria’s reign.

When we walk up hills I frequently tell Lynnie there will be a cafe on the top, of course this is rarely the case and today is no exception.  However, there was a cafe up here for many years until in burnt down in 1987.  When it came to rebuilding it the Malvern Hills Conservators were refused planning permission and they sought to amend the Malvern Hills Bill which was going through parliamentary process.  After a visit by members of the House of Lords Select Committee it was determined there were enough alternative facilities in the area and there was no need for a cafe.

Personally I think a cafe here would detract from the beauty of the location, but of course Lynnie would  argue the provision of ice cream on top of a hill would be an asset, indeed an essential requirement.

There is an extensive network of paths here so it is difficult to describe with accuracy our route, we are heading to St Ann’s Well via Green Valley.

The path we take goes around Sugarloaf Hill and then goes right to descend into Green Valley where we come across another dressed well.

Now it is just a case of following the waymarkers as the path heads downhill towards St Ann’s Well.

The water supply at St Ann’s Well is located in a building dating back to 1813 and has a very elaborate carved water Sicilian marble water spout which was donated by the local landowner, Lady Emily Foley, in 1892.

The water here is said to have special healing qualities and was a very popular source of the pure water flowing from the hills.  The popularity of the site resulted in the addition of an octagonal building in 1841.

It is a fine building but in 1963 the Malvern Hills Conservators thought it might be a good idea to demolish the Victorian buildings.  Clearly they forgot the conservation element of their role, thankfully common sense prevailed and the historic building continues to operate as a cafe.  To Lynnie’s delight she is able to acquire an ice cream just before the cafe closes for the day.

From the cafe we join a path heading south which follows the contour line through trees.

The path leads us to the edge of a quarry on the eastern side of Summer Hill.

From the quarry the path gradually ascends to return to the Gold Mine route marker.  From here we return to Upper Wyche on the track we walked earlier.  After crossing the road we take the path at the side of the fine bus shelter besides the public toilets.

After ascending to the ridge we take a path that skirts around the summit of Perseverance Hill and then I head over Jubilee Hill whilst Lynnie takes a path around the side.

At Pinnacle Hill we both decide to take the path that goes around rather than over the summit and do the same when we get to Black Hill.  There are plenty of options for our descent, we take a path down towards a car park and then walk alongside the B4232 to return to our starting point in the British Camp car park.

Our walk has covered almost 9 miles, there has been a lot of ascent and fortunately we have been blessed with a clear day to appreciate the stunning views.