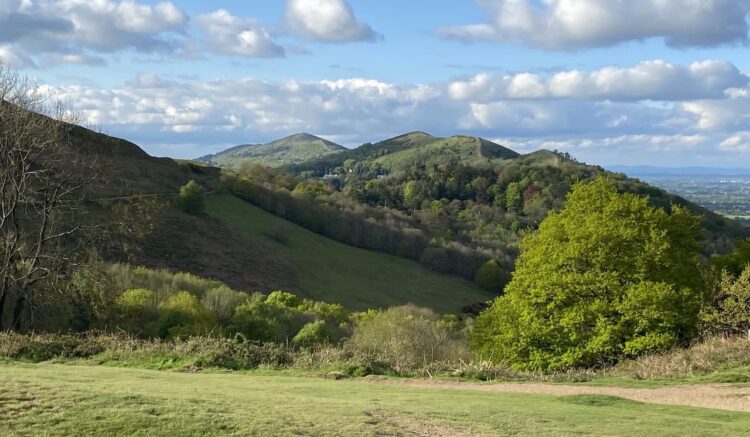 On our previous trip to Goodleigh Hill CL in November I did a couple of walks on the Malvern Hills.  On the first Lynnie accompanied me, but on the second I visited British Camp on a very cold day with snow forecast and Lynnie declined to join me, preferring to spend a few hours wandering around Pershore.  It was a stunning walk and is top of my list of places to revisit during this stay.

It is about fifteen miles from the caravan site to the British Camp car park (WR13 6DW) besides the A449.  This is a pay and display car park with a set fee for the day, the proceeds are used to maintain the Malvern Hills as an area of outstanding natural beauty.  Leaving the car park we go through a gate and follow a broad path that gradually ascends the hill.

At a junction of paths we continue straight on, ignoring steps which lead to British Camp.  The path we are on hugs the contour line below the camp and soon take us above the British Camp Reservoir.

Apparently following water shortages, the 1891 Malvern Water Act was introduced.  This allowed the reservoir to be built and it was opened in 1895, it collects water from the springs in the area.   It is a fine looking small reservoir, the current low level of water reflects the recent dry spell we have been experiencing.

The path we are on is the route of the Three Choirs Way, a 100-mile long distance walk which links the cathedral towns of Worcester, Hereford and Gloucester.  After passing the reservoir we start to  gradually ascend to a point where a number of paths join.  Here we stay with the route of the Three Choirs Way as it leads past Clutter’s Cave.  According to the Malvern Hills Trust this is a folly created in Edwardian or Victorian times, however, others describe it as a small quarry or a medieval hermit’s dwelling.  Confusingly it is also known as Hermit’s Cave, Giant’s Cave or Waum’s Cave.

The pat continues along the ridge and then at a junction of paths we stay with the Three Choirs Way as it gradually descends towards Gullet Wood.  There is a stone marker here pointing the way to The Gullet and Midsummer Hill.

It is a cracking afternoon and we pass an area of bluebells and continue along the path to go through a gate besides a cattle grid.

We now continue on the track to reach a junction of tracks, we turn right and go through a kissing gate and head uphill on the route of the Geopark Way.  This long-distance path goes 109 miles between Bridgnorth and Gloucester exploring the geological changes along the way.  We are only following for a short distance to reach Eastnor Obelisk at the top of the hill.

This obelisk was erected in 1812 and is a monument to various members of the Somers Cocks family.  Those commemorated include John Somers, Lord Chancellor in 1700 who was an adviser to William III, and Philip James Cocks, who was an intelligence officer on Wellington’s staff and died during the siege of Burgos in the Peninsular War in 1812. Afterwards his father, Earl Somers, had the obelisk erected.

From the obelisk we retrace our route down the hill to the junction of paths.

After going through the gate we continue along the route of the Geopark Way and the Three Choirs Way heading south towards the A438.

As we head along this track we get a good view back across to the Eastnor Obelisk.

On reaching the A438 we turn right at the entrance to a small car park and walk along the road for just over a hundred yards and then cross the road with care to go through a kissing gate leading to Ragged Stone Common.  This is open access land but we choose to initially stick to the route of the Geopark Way which goes to the right and skirts around the hill passing through an area of stunning Bluebells.

When the Geopark Way turns to the right we continue on a clear path leading to Whiteleaved Oak.  In this attractive hamlet we turn right and then almost immediately turn left on a path which goes besides a cottage and continues along a sunken track.

The track leads to open access land where we continue on a well-worn path that ascends Chase End Hill.  This is a short steep ascent and we are soon on the top of the hill standing beside the Ordnance Survey trig pillar.  I bagged this trig back in November but it is Lynnie’s first visit here.

It is a cracking day and the views from Chase End Hill are stunning.

We continue on heading downhill to a junction of paths where we turn left and then left again to follow a track through woodland.

At a junction paths we turn right to leave the track and briefly go downhill to reach the Three Choirs Way where we turn left and follow what appears to be an old tramway heading north.  We soon cross a bridge over a minor road in Whiteleaved Oak.

On leaving the woodland the route continues across fields.

After passing an interesting thatch cottage we join a minor road and follow this towards the A438.

After passing Hollybush village hall we cross the main road and continue along a minor road.

This minor road goes north along the edge of woodland and then as we near The Gullett we fork left on a path, the map shows this a minor road, but clearly it is a long time since a vehicle travelled along it.

This path goes above a stream and then on reaching a bridge over the water we turn right to cross the bridge and then turn right again to follow a path alongside the disused Gullet Quarry.  In the early 1900’s many quarries were opened on the Malvern Hills to extract granite for road making.  In 1953 the government of the day decided that extraction should stop and most of the quarries closed, but an exception was made for this quarry and it continued to be worked for another twenty years before closing around 1977.

There are numerous signs about the dangers of wild swimming and every effort has been made to make the quarry inaccessible, however, people foolishly continue to try and access the water to swim.  Sadly there are numerous reports of deaths, mainly of young men.  In 2020 the Herefordshire and Worcestershire Fire and Rescue service told the BBC that there had been 5 deaths in the previous 14 years.

The information board besides the quarry explains the geological structure of the hills.  We walk along a track and then as it nears a road turn left to head steadily up Swinyard Hill.

One of the features about walking around the Malvern Hills is the old waymarkers that indicate various routes.  We reach one of these and take the route to Giant’s Cave and British Camp.

This is the path we walked down earlier as we descended from the cave and it soon comes into view again.

Continuing on past the cave we reach a point where there are multiple options, we take the route towards British Camp.

The route goes uphill giving good views back across the British Camp Reservoir.

I visited British Camp last November for the first time, on that occasion Lynnie was not with me so it is her first visit and it could not be a better evening for it.

British Camp was originally an Iron Age hillfort and thought to be bonded around the time of the Roman invasion.  It was later the location of a medieval castle which was constructed within the iron age ramparts.

The summit of the hill is known as Herefordshire Beacon, this is not the highest point of Herefordshire, but it still stands at 338 metres, or if you prefer 1,109 feet, above sea level and on a day like this the views are panoramic.

In front the northern ridge of the hills stretch into the distance, we plan to walk along that ridge tomorrow and the number of ascents and descents look a bit daunting from here.

We have one last descent on our walk today making our way down the hill back to our starting point in the British Camp car park.  It has been a cracking walk covering nine miles, which is shorter than I would normally walk, but there has been 1,555 feet of ascent along the way so not a bad day’s exercise.