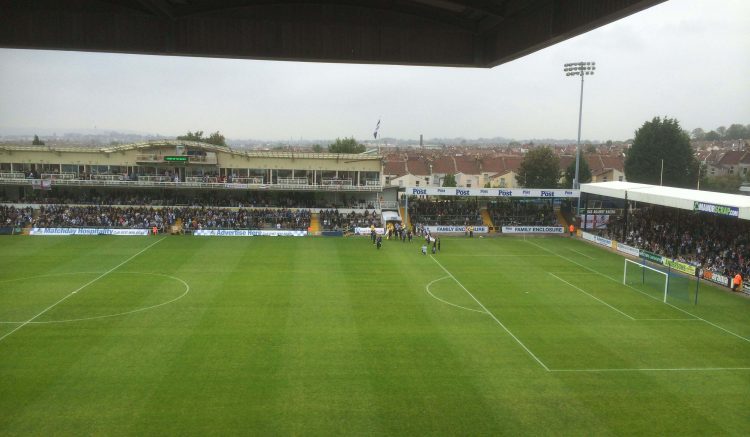 It is our first Friday night back in Taunton and we fancy a night out “on the town”. When we previously lived in Taunton we found that one of the benefits was the number of pubs and restaurants in the town. This was a real novelty for a couple that had spent most of their time together in a village with one pub (albeit a reasonably good one). The other benefit was that there was an evening and late night bus service, unfortunately this has now stopped so we walk into town.

It is just over eight years since we last lived in Taunton and at that time there were three or four pubs in town that we used occasionally. One of my favourites was The Racehorse, it served excellent Guinness and was usually buzzing on a Friday and Saturday night. Since then the pub has changed hands and is now a St Austell brewery pub. Fortunately they have kept many of the features inside so there is a warm and friendly feel. This was and continues to be a proper drinking pub with the focus on wet sales, not a menu in sight. It is not as busy as I recall and the Guinness not as I remember, but still very drinkable. I make a note to sample some of the wide range of bitters on our next visit, they are getting rave reviews from fellow drinkers.

After one pint we decide to move on. The centre of Taunton is very quiet, not like it was ten years ago. We walk on nearly deserted streets and wander up past the County Council Offices and the Police Station to The Vivary Arms. This was the pub that in the past we favoured. To our delight the pub still has the same landlord and landlady, Mark and Emma. As soon as we walk in we receive a warm welcome from Mark. He immediately recognises us and enquires after Ben and Lolly. Now that’s what I call a good landlord. This will become our ‘local’ for the next six months, even if it is a forty-minute walk away!

Those that know me will know that I take a keen interest in football. I have been a livelong supporter of the Saints, but also enjoying watching matches when the Saints are not involved. Over the years I have watched a number of games as a ‘Neutral’ that are enjoyable because you can see the game through unbiased eyes.

A few years ago I became close friends with Darrell Clarke, the then manager of Salisbury City FC, but now manager of Bristol Rovers. After the Saints result the next one I look for is to see how Darrell’s team is doing. So on Saturday afternoon Lynnie and I make the trip up the M5 to the Memorial Ground to watch Bristol Rovers play Woking. Like me Lynnie enjoys football, but I think she is particularly interested in the pasties that are served at the Memorial Ground.

When I worked in Taunton I had a work colleague / friend who was (and still is) a Gashead. Rovers fans acquired this nickname because of the locality of their old ground at Eastville to the gasworks. Ray and I went to watch the Rovers one evening after work and arriving tight to kick-off opted for a Proper Pasty, as I recall it was huge and probably the best pasty or pie that I had ever eaten at a football match. It took me most of the first half to eat it! I cannot remember who Rovers were playing that night or the score, but I remember the pasty and the minute’s silence before kick off for Rod Hull, a Rovers fan who had died a few days before the game.

I am convinced that the real reason Lynnie has come today is the pasty! As soon as we are in the ground she spots the kiosk and shows a turn of pace that Clarky would welcome in his forward line, she then sets about the pasty quicker than Emu attacked Michael Parkinson.

We watch an entertaining game of football, Rovers win 2-0, but Woking look a good side and I would not be surprised if they and Rovers are near the top come the end of the season. I enjoy listening to the banter from the fans, they clearly enjoy their day out at the match. The support is excellent, over 5,000 to watch a ‘non-league’ game and the frequent renditions of ‘Goodnight Irene’, a favourite with the Gasheads ensure a good atmosphere.

Years ago, back in the 1970’s I went to Eastville to watch the Saints play Rovers in the FA Cup. It was not a pleasant experience, one of the scariest I have had at a football match. (Though nowhere near as terrifying as watching Saints beat Pompey in the FA Cup at Fratton Park in January 1984 with a Steve Moran goal in the last minute!). After that day I never thought I would enjoy being with crowds of Rovers fans. But today was a cracking day out, so we will return before too long.

Back in Taunton I take the dogs for an evening stroll. Over the last six months they have had many varied walks, but this local walk in Taunton appears to be high on their list of favourites. The reason being that it goes alongside a McDonalds Drive-in and unfortunately (or fortunately for Crosby and Dexter) the customers of this establishment appear to feel it appropriate to discard their left overs along the verge. As far as the dogs are concerned a thirty-minute walk around the block passing McDonalds beats fifteen miles in open countryside.