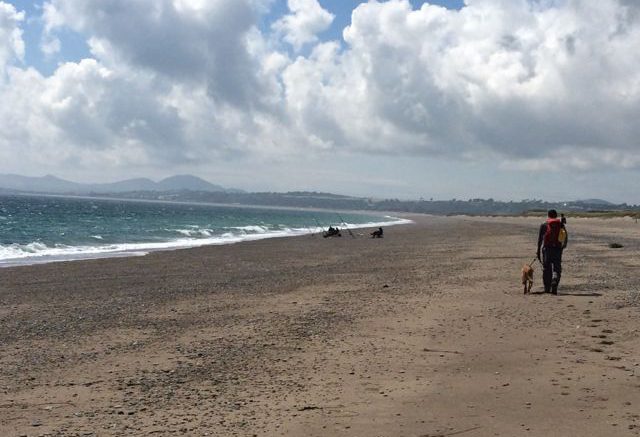 One of the things that we try to do when staying away is find a local butcher. We have been told that there is one in nearby Chwilog and as soon as we walk through the door we know we are onto a winner. Povey Butchers was established in 1948 and is still run by members of the family. We leave with freshly cut salt marsh lamb chops and some award winning sausages. But before we can enjoy these it is time for a walk. 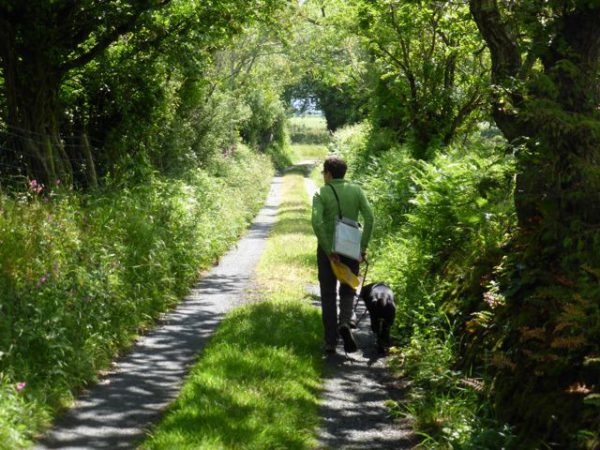 Our walk starts by following the route from the site to the beach that we took yesterday evening. We leave the site and take the lane to the pavement besides the A497, at the roundabout at Afon Wen we follow the coast path down a tarmac lane, after going under a railway bridge this turns into a path by a stream. 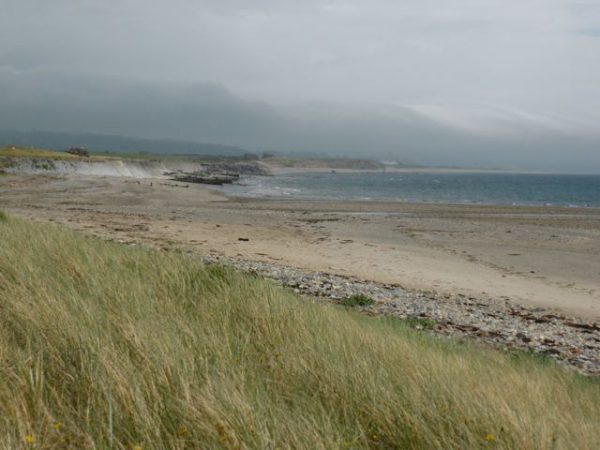 The tide is out so Dexter and Crosby are soon running around chasing tennis balls. Our walk takes us west toward the holiday park following the Llyn Coastal Path towards Abererch. Billy Butlin built the camp at the request of the Government during World War II. The deal was that during the War it would be used by the military and afterwards would revert to Butlins to be run as a holiday camp.

Immediately after construction the site was known as HMS Glendower and was used as training base for the Admiralty and Merchant Navy. It was served by its own railway station; Penychain. At Easter, 1947 the site opened as Pwllheli Butlins with capacity for 5,000 people, later increasing to 8,000. With all of those folk staying the beach must have been mayhem. The site is now run by Haven Holidays.

Past the holiday park there are notice boards saying this is a good spot for Bottlenose Dolphins. As we walk around the headland of Porth Fechan and over the peninsula of Pen-ychain we keep a look out, to no avail. 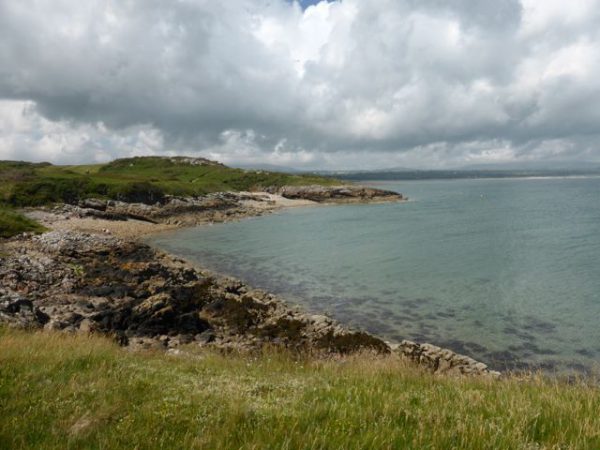 On Pen-ychain peninsula we stop to look at the remains of gun emplacements that formed part of the coastal defenses during Word War II. 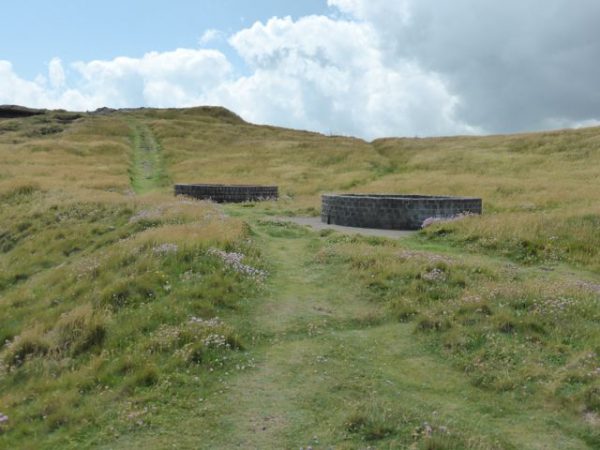 Turning the corner we see a length of shingle beach that stretches for almost four miles to Pwllheli. 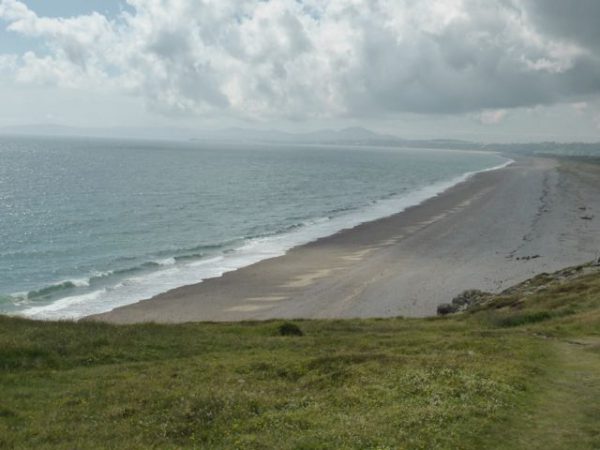 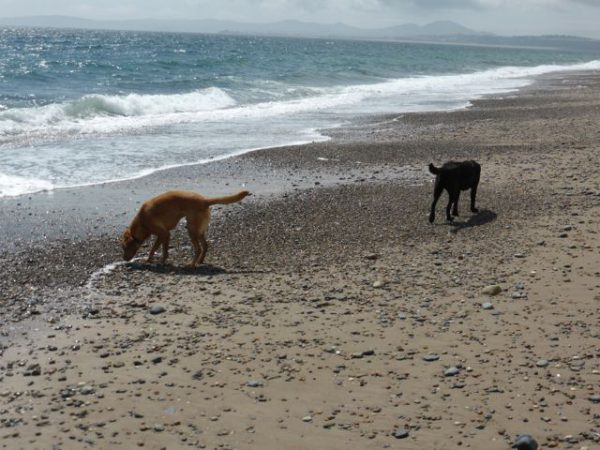 This is another opportunity for the dogs to have a run around, and then we suddenly spot some very large Jellyfish. 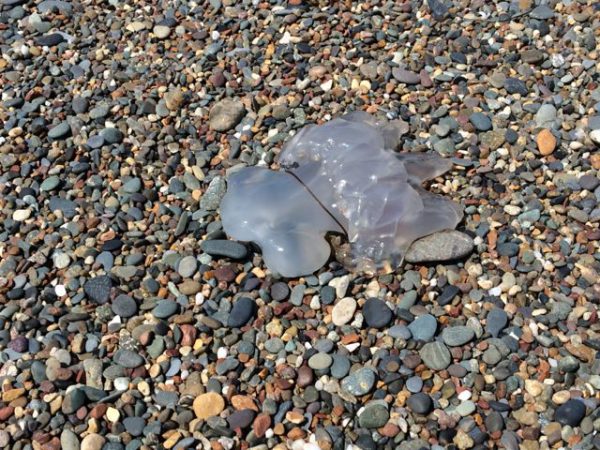 Crosby and Dexter start to show an unhealthy interest in these creatures so for safety’s sake they return to their leads.

After two miles of hard going on the shingle beach we take a footpath off the beach and past Abererch Railway Station. On meeting a roundabout we head straight on towards Abererch and then after about fifty yards turn right along a lane.

Less than a hundred yards later we turn left to follow a bridle path up a wooded driveway, then up a grassy track to the left as it veers from the driveway about quarter of a mile later. We follow this track until it meets a minor road and then turn left to stroll along it.

This road is a very quiet lane. Walking on roads does not sound very attractive, but cars clearly, from the amount of grass growing up the middle, rarely use this narrow lane. Just over a quarter of a mile later, at a fork in the road we go right and continue on this lane for three quarters of a mile before meeting a junction and turning left. 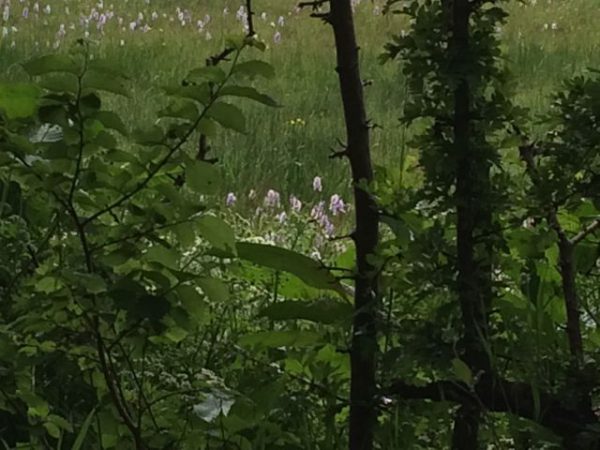 The lane turns sharp right and then sharp right again a quarter of a mile later. The best part of a mile later we walk into Chwilog. Our stroll through the lanes has been fascinating with a wide range of wild flowers and wildlife on show. All the while we have had stunning views of the mountains of Snowdonia. 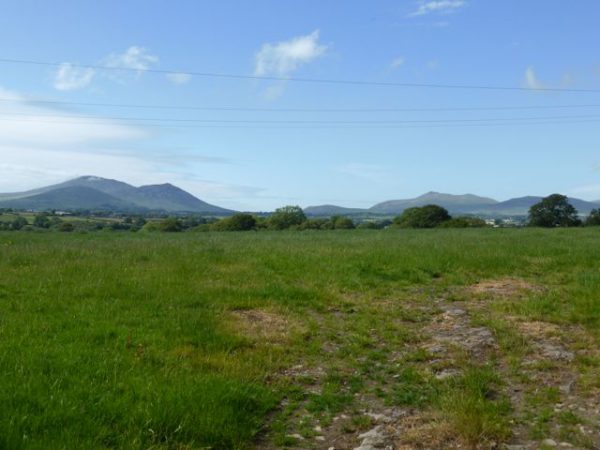 In Chwilog we wander through the village and rather than taking the most direct route, along the busy, pavement less B4354, we wander down to Afon Wen and follow the route on the pavement by the A497. It has been a stunning walk, near on ten miles and we have hardly met a soul.

Back at the Unicorn our evening meal is a couple of exceptionally tasty Povey’s Salt Marsh Lamb Barnsley chops, washed down with a pint of Reverend James bitter. There is plenty to be said for being in Wales.