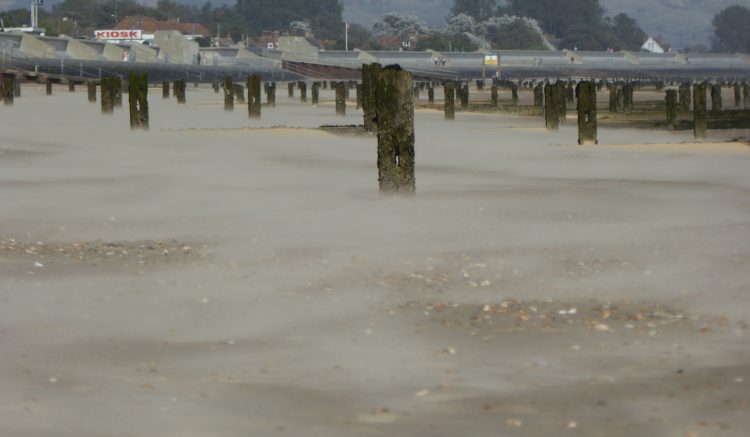 After yesterday’s wander around the north edge of Romney Marsh we have decided to head towards the coast and see what that has to offer.  It is about four miles from Bellfield Farm CL to Dymchurch, most folk would hop in their car to make the trip but we lace up our boots and head off.

We leave the site by turning left along the lane; at a T-Junction we spot an interesting marker post.  Apparently it is one of a thousand such posts funded by the Royal Bank of Scotland as part of a Millennium Project to mark national cycle ways.  This one marks Cycle Way 2, spanning the 361 miles from Dover to St Austell.  I do not know what RBS contributed to the project, but I am sure it is far less than the reported £20b they took from the Bank Recapitilasation Fund in 2008. 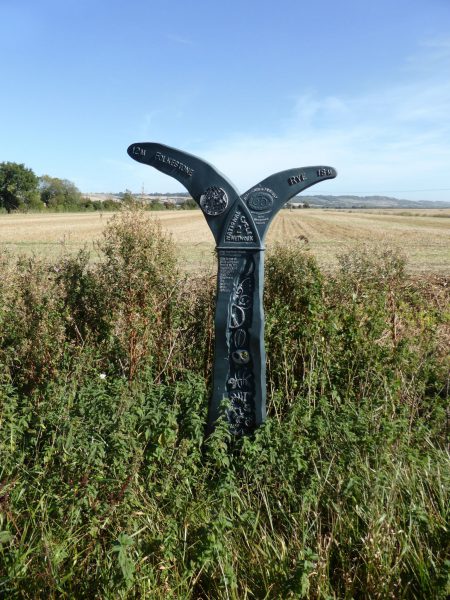 The next half-mile is taken up by us discussing the plight of those highly paid bankers (I am sure that is the word I used) that walked us into a financial crisis that has left many of the less well off in society severely damaged.  Needless to say we use an ethical bank.

Fortunately, before we get too worked up about this topic we are distracted by something interesting.  It is the remains of Eastbridge Church, apparently mentioned in the Domesday Book; now only part of the west tower and the walls of the nave and chancel remain.  It is odd that this interesting site is not well signed. 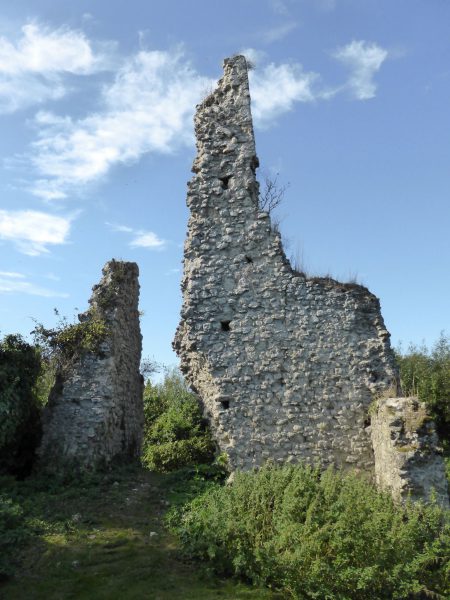 We return to the lane and continue our walk towards Dymchurch  soon spotting a cross in a field by the side of the road.  The cross bears an inscription reading “AMDC – This cross was erected on the site of the ancient church of Orgarswick 1938”.  Apparently the church that once stood here was built by the Saxons and disappeared in the 15th century. 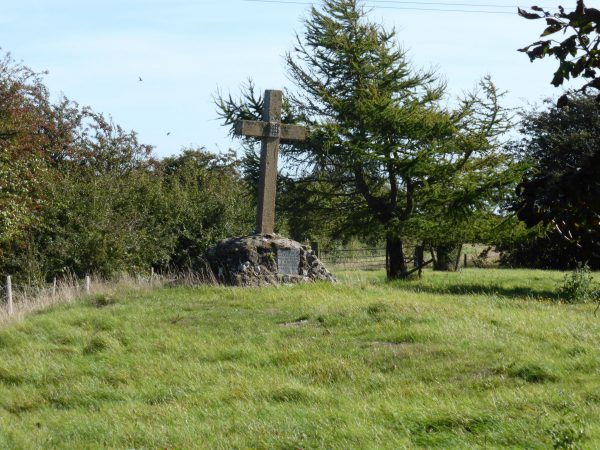 We contemplate the lives of the people that have previously wandered across these marshes wondering what it would have been like four or five hundred years ago.  We conclude it must have been a harsh existence and hard work just surviving.  Our current concern is that the road we are walking along appears to be sinking, not before our eyes, but gradually due to the boggy edges of the marsh.

We have reached the outskirts of Dymchurch, along the way crossing the narrow gauge Romney, Hythe and Dymchurch Light Railway.  Carrying on into the centre of Dymchurch Lynnie spots a second hand bookshop.  There are two things that make a walk worthwhile for Lynnie, one is an ice cream, the other a visit to a second hand bookshop.  I wait outside while she peruses the books.  I am outside the amusement park, it is nowhere close to the scale of Blackpool, but I am sure it provides entertainment for young holiday makers. 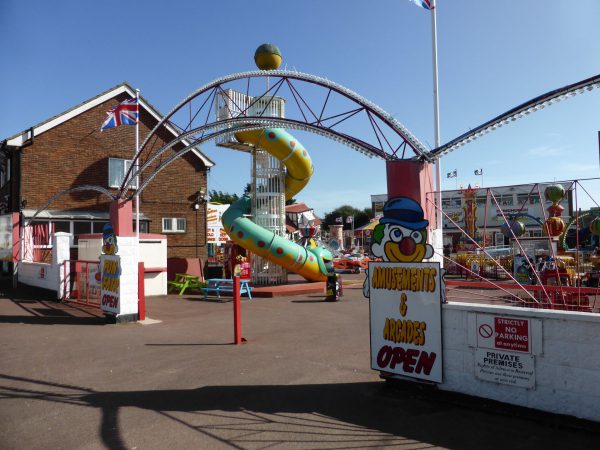 Dexter and Crosby hoover up discarded chips and biscuits from the pavement by the park entrance whilst I look at an old building on the far side of the road.  A plaque outside states that Paul Nash, Noel Coward and Elisabeth Nesbit stayed here, presumably not all at the same time!  I know of the actor and playwright Noel Coward, but the other two are a mystery to me.  However, Lynnie returns to tell me that E. Nesbit wrote, amongst many other books, The Railway Children and Paul Nash was a surrealist painter.  This is a fine example of how we complement each other, Lynnie knows about art, history and all things clever, whilst I provide the encyclopedic knowledge of every Saints football match I have watched since the 1960’s. 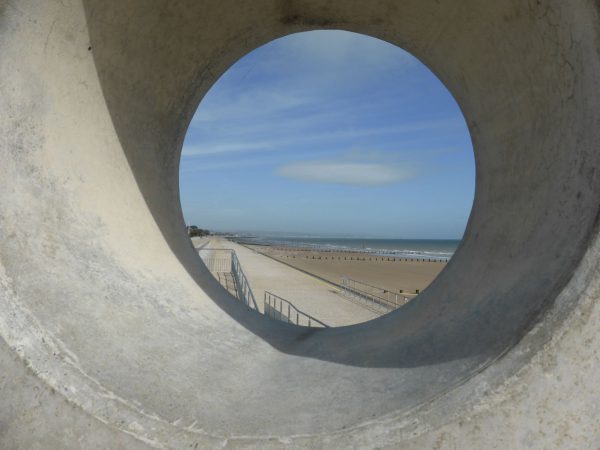 We follow a path leading onto the sea defences rising high above the village.  We were sheltered from the wind but up here we are totally exposed to the chill breeze.   The sea wall is an impressive structure running for miles in both directions along his stretch of coastline. 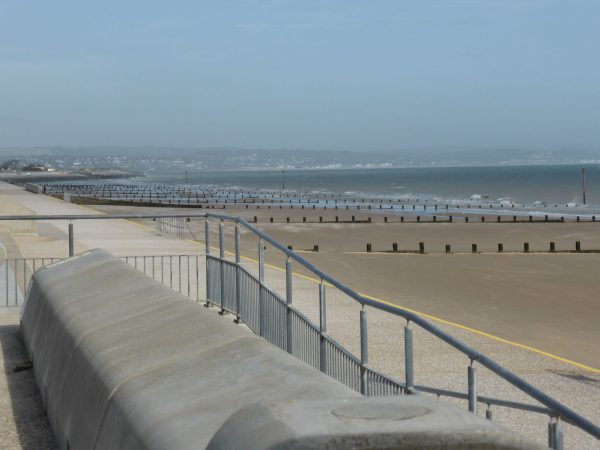 Turning right we stride along the promenade on the sea wall, soon arriving at a Martello Tower.  We have come across these before, the last one in Suffolk.  There were a total of 103 Martello Towers built in England between 1804 and 1812.  They were fortified towers that housed the garrison on the first floor, above the ammunition and stores, and on the top cannons provided protection against the threat of invasion from Napoleon and his forces. 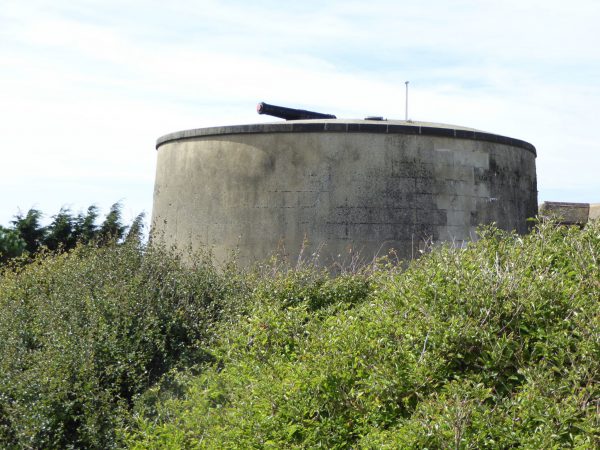 This tower is one of six built in Dymchurch.  It is Martello Tower No 24, No’s 20 to 22 have been demolished and No 23 is now a private house.  This one has been restored and is operated by English Heritage it is open at certain times to visitors, dogs are not admitted so we will have to come back another time.

A bit further along in a car park we see Martello Tower, No 25.  This one looks in need of restoration.  The towers gained their name from a design first used by the French on the island of Corsica; the tower was located at Mortella Point in the Bay of Fiorenzo. 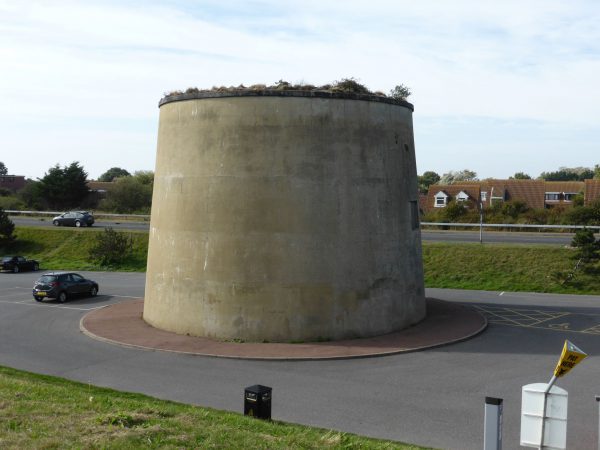 From the moment we arrived at the seafront the dogs have been itching to get onto the sands.  It is after St Mary’s Bay before we reach a beach where dogs are allowed at this time of year. Soon they are charging around on the sand.  It is weeks since they were at the seaside and they are certainly making up for lost time.  The tide is a long way out, so Crosby finds some deeper water around a groyne to paddle in. 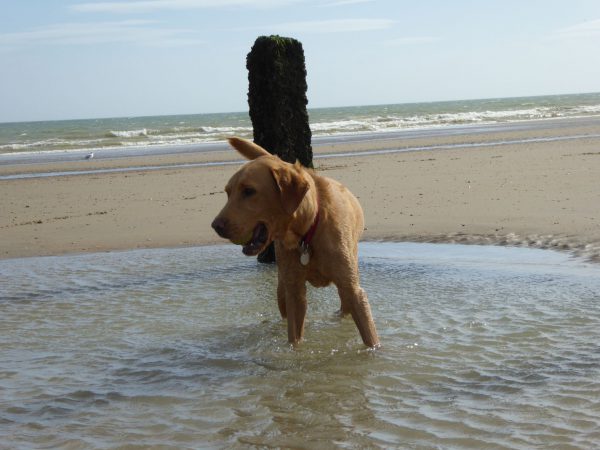 The breeze is still strong and blowing the sand across the beach, it is an amazing sight.  But we need to ensure that it does not blow into our (or the dogs) eyes. 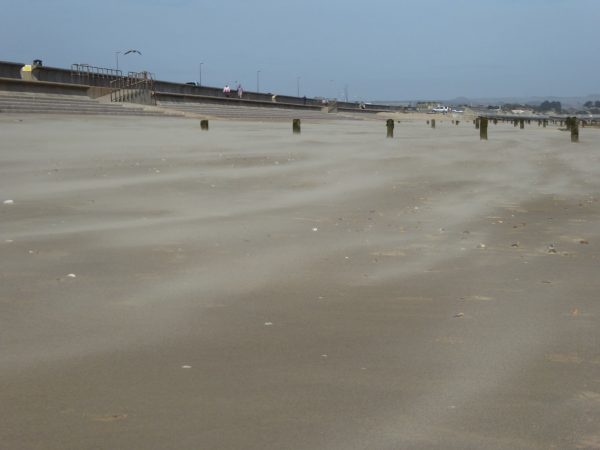 After a while we return to the path on the sea wall.  Out at sea there is a strange structure.  A look at the map identifies it as a Phoenix Caisson.  This was part of the planning for the D-Day landings and was to have formed part of a temporary Mulberry harbour constructed off the Normandy coast.  This particular section was “parked” on a mud bank in preparation for transportation across the channel.  However it became stuck and has remained here ever since. 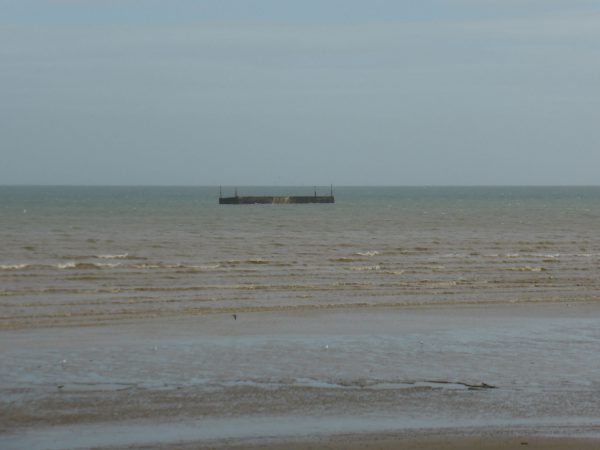 As we head towards Littlestone-on-Sea we pass the golf course and can see a tower in the distance.  We each try to guess its purpose; our choices include a clock tower, castle, folly, church tower, look out fortification and water tower.  The last being my option, and though not a competitive soul it is with glee that I discover it was a Water Tower that has now been converted into a home. 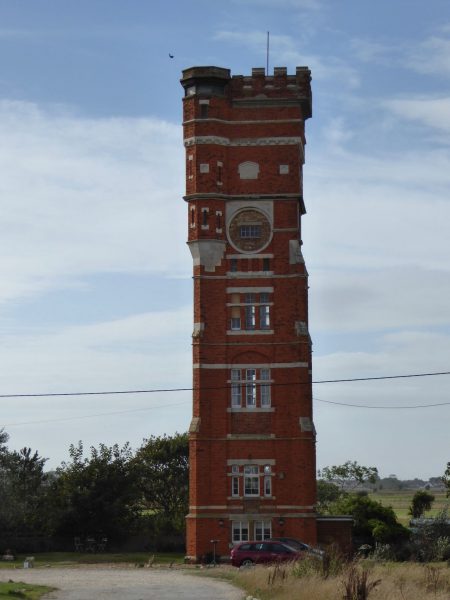 Apparently the village of Littlestone was created by Sir Robert Perks in the 1880’s as a seaside resort for the gentry. A hotel and golf course were constructed and the 120 foot water tower was built in 1890 to provide the resorts water.  Unfortunately for Perks the visitors failed to turn up.

On reaching a park on the seafront at Littlestone we spy a water fountain, a great opportunity to give the dogs a drink.  I take the collapsible water bowl from the rucksack and  press the fountain button.  The inscription states it was erected through public subscription to commemorate Queen Victoria’s Diamond Jubilee in 1897 and it is a fine water fountain with just one flaw.  No water flows from it! 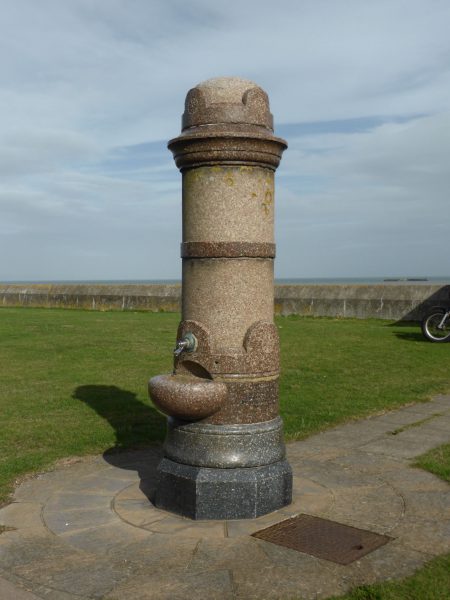 From the seafront we take a road heading towards New Romney, soon passing a Memorial Garden to Diana Princess of Wales.  Rather bizarrely given her laudable stance on land mines the locals have seen fit to place a five and a half inch, twenty four pounder, Howitzer in the gardens.  It is a fine bit of history as it was one of the guns that would have been located on a nearby Martello Tower, but the irony of its location is not lost on us. 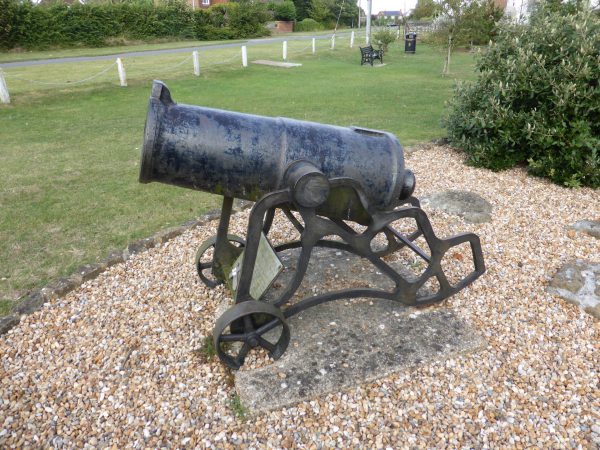 We follow the road into New Romney and then turn right, about a quarter of a mile later we take St Mary’s Road on the left and are soon heading out of town.  Along this road we pass a number of houses flying the St George’s Cross in the garden.  If we were in Scotland or Wales folk were flying their national flag we would not worry.  It is unfortunate that in England the Far Right has hijacked our national flag and consequently it makes me cringe.  I am certain that not everyone who fly’s this flag is on the far right, but unfortunately many are.

Now out on the marshland we stop briefly to observe the sugar beet harvest. 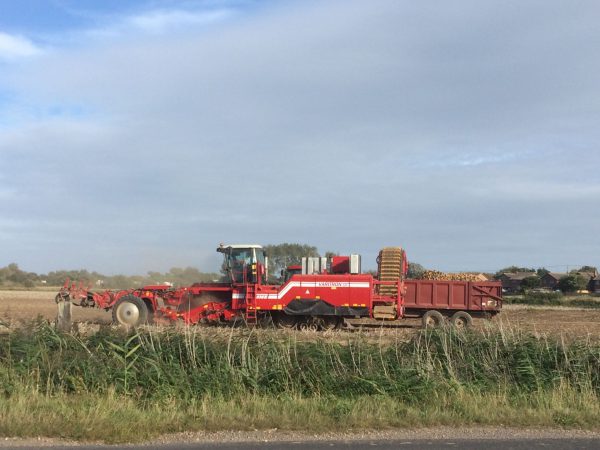 Continuing on we pass a cottage with an unusual flag.  The home-owner is at his gate and explains that it is the flag of Romney Marsh, designed by local school children.  This is an uncontentious flag to fly.

Our route continues along the lane towards Newchurch.  On reaching Gammon’s Farm Lane we turn right and follow this to the road that leads back to Bellfield Farm.  Our walk has covered fourteen miles and has provided a very interesting historical insight into the area. We will get in the car tomorrow and explore a little further afield.