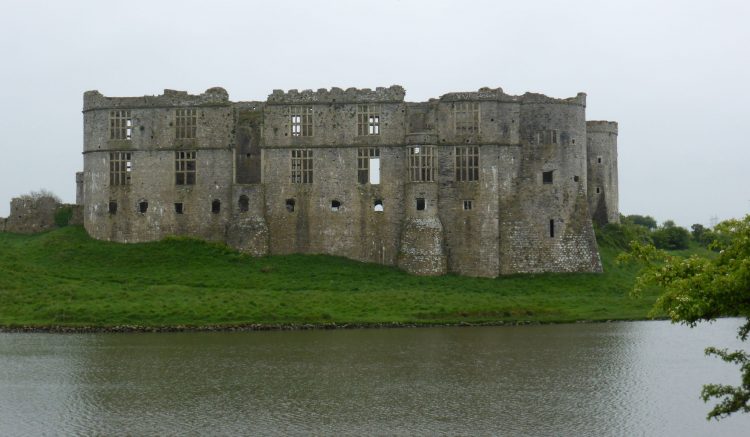 There are a couple of things that are likely to get Lynnie enthused about a walk, one is the promise of quality ice cream and another is a chance to look at a castle.  I am not sure that I can guarantee ice cream on today’s walk, but there is certainty about seeing a castle.  Lynnie still has problems with her back but hopes a short walk might help.

It is a grey day, a hint that rain might be on the way, but we can’t complain, as the weather has been fantastic for the time of year. It is only a short drive from Woodstock CL to Carew Castle and we are soon in the car park overlooking the castle. 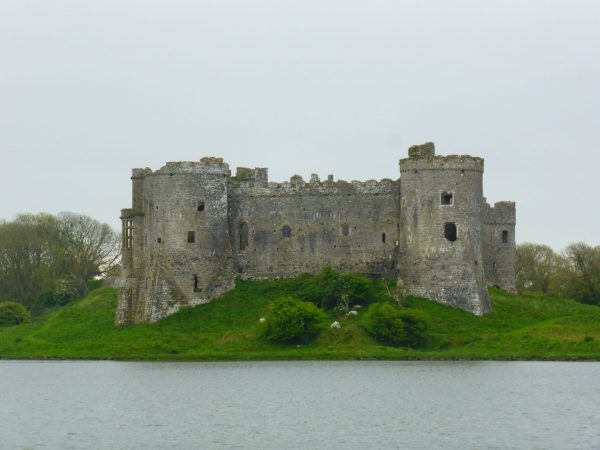 Apparently a Norman Castle stood here from around 1100.  Then the Carew family acquired it and started installing stone structures. These were enhanced in the early 14th century by Nicholas de Carew who constructed a number of buildings around the courtyard.

In 1558 the Castle was granted to Sir John Perrot by the crown. He went about building much of the external structure that can still be seen, however, Perrot was convicted of treason in 1592 and died in the Tower of London.  The castle was then let to various tenants and finally abandoned in 1686.  Since 1984 Cadw has funded restoration work and now maintains the Castle for visitors.

We walk west along the edge of the mill pond and cross the ancient causeway, originally constructed back in the 1600’s to create the 27-acre mill pond to serve Carew Tidal Mill. 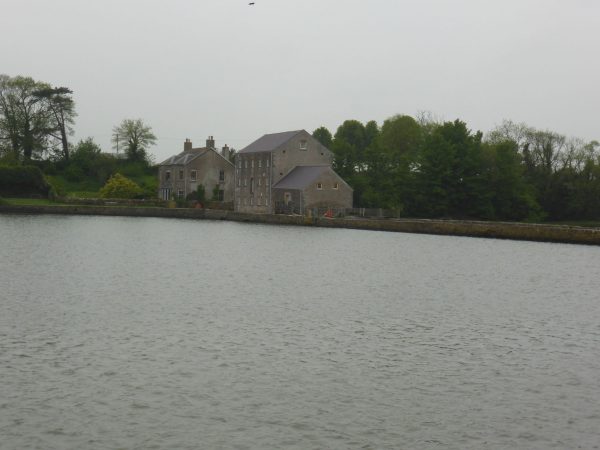 The pond fills through open floodgates as the tide comes in, at high tide the gates are closed and the water is allowed to drain via sluices under the mill.  Apparently this is the only example of such a mill left intact in Wales.  It was abandoned in 1937, but following restoration in 1972 is now open as a museum. 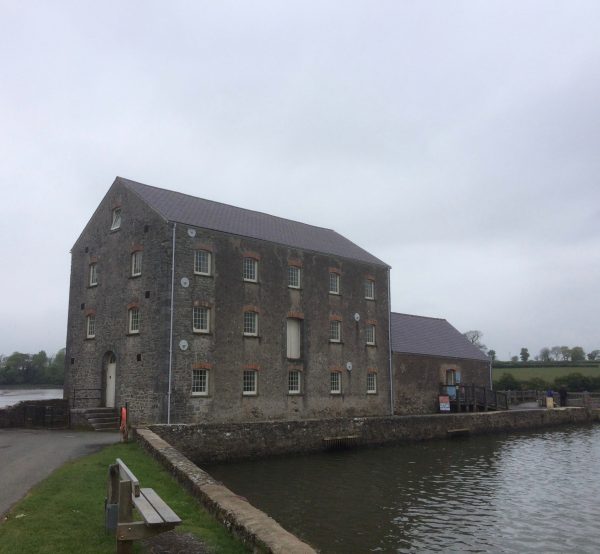 We carry on up a lane and then turn right onto a minor road that heads towards Radford.  This soon becomes a bridleway as it leads to Radford Pill.  The map suggests that the bridleway continues across the river, but even at low tide there is no visible means of getting across and I don’t fancy venturing onto the mud banks.  There is a well-worn path on the left besides the river and we follow this towards Milton.

On reaching the main A477 we turn right and follow a path into the village, continuing through the village on the minor road towards Cosheston, this is good walking for Lynnie’s back.  The road is quiet and the even ground is ideal, after half a mile we cross a bridge over Ford Pill and turn right onto a footpath entering woodland.  The path way has been recently cut and is easy to follow. 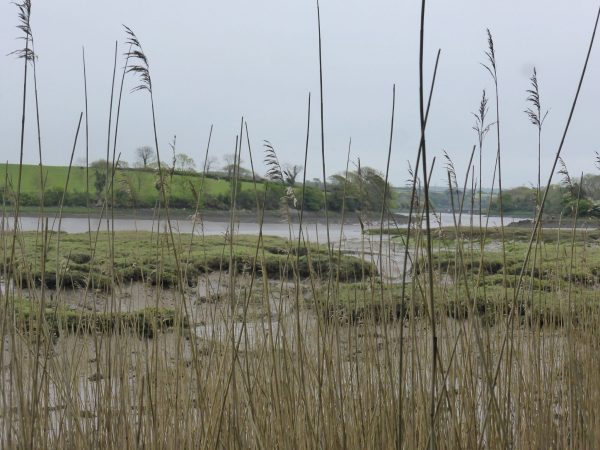 The path loops round and then heads back to Paskeston Hall along the edge of pasture.  There is recent evidence of bears, but they do not appear to be in our line of travel.  After going through gates we are alongside a fence when the bears appear, fortunately, on the opposite side of it, they are inquisitive young steers, not something we would have wanted to encounter!  The route now follows a track to Paskeston Hall with fine views over Carew Castle. 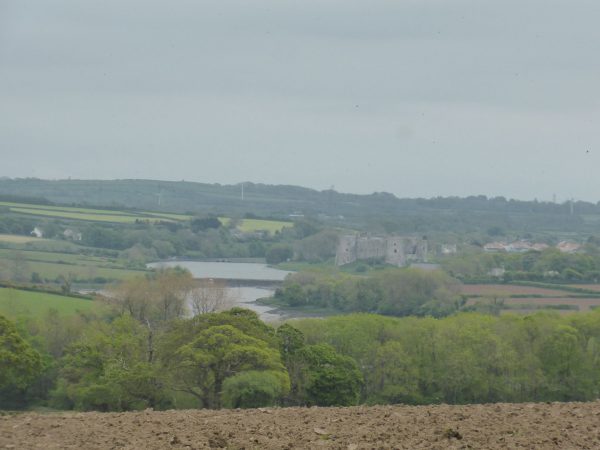 After following the footpath signs around Paskeston Hall we follow the driveway down to meet the minor road we were on earlier and turn right towards Cosheston.  As we approach the village Lynnie is obviously struggling so we decide to turn around and walk back along the road to Milton.

This is slow going because of Lynnie’s back and we contemplate my heading back to get the car, but in the end decide to press on.  In Milton we take the footpath across fields to rejoin the lane close to the Tidal Mill and then turn right and follow this back around the boundary of the Castle. 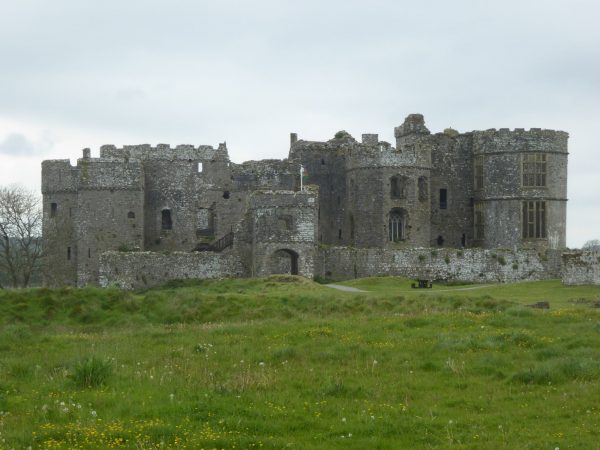 As we head towards the ridge we spot the 11th century Celtic Cross thought to commemorate Maredudd ab Edwin who died in 1035.  Its original location is unclear but it was moved to Carew around 1690.  Over the years it has been moved around to allow for the nearby road to be widened and during World War II it was removed for safe keeping.  It is said to have inspired the symbol of Cadw, so it is fitting that it should be so close to one of it’s sites. 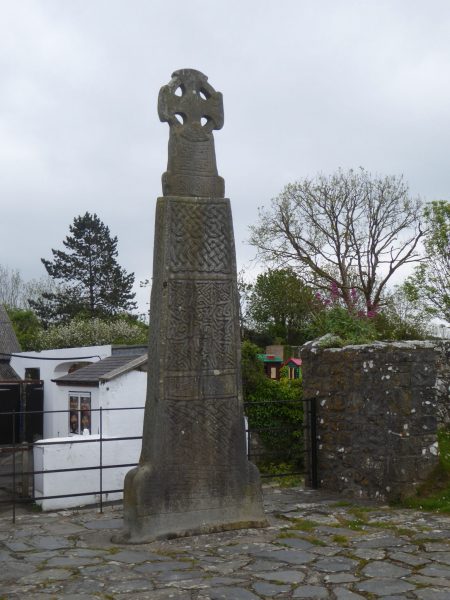 We head back across the bridge and from here to the car park.  Our stroll has covered over seven miles.  I have a feeling that Lynnie will decline the offer of a walk tomorrow, rather worryingly her back does not appear to be getting any better.

It is unusual for us to drive around, but we do not know this part of the country at all so decide to head off through Pembroke to West Angle Bay.  This is a small bay and a great spot for the dogs to run around. 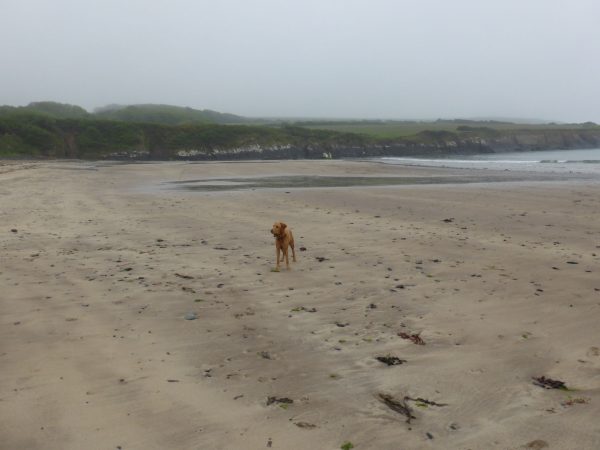 We are the only people here and the weather is deteriorating with a sea mist rolling in.  The information board by the beach describes the view across to the lighthouse at St Ann’s Head on the other side of the Milford Haven estuary; this is a busy shipping lane with the oil refineries and shipping port of Milford Haven around the corner.  I must take their word for it because I cannot see any further than Thorn Island with its Fort built around 1854 to protect the estuary from attack by Napoleon’s fleet.  In 1947 the fort was converted to a hotel and newspaper reports from the end of 2016 highlight the sale of the hotel and island for just over £0.5m. 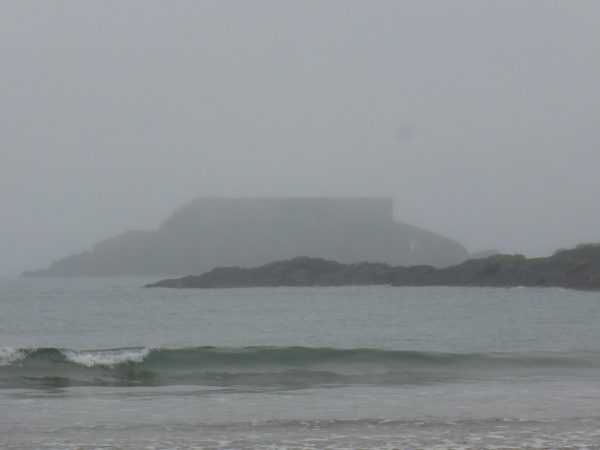 It is hard to imagine, but this small beach was once a busy little port.  On the north side of the bay there is a small entrance carved from the rock, at high tide this creates a harbour, which was used to offload coal from further along the coast.  The coal was required for the limekilns, now overgrown, just above the harbour.  There used to be a brickworks on the south of the bay, the bricks were transported from the harbour. 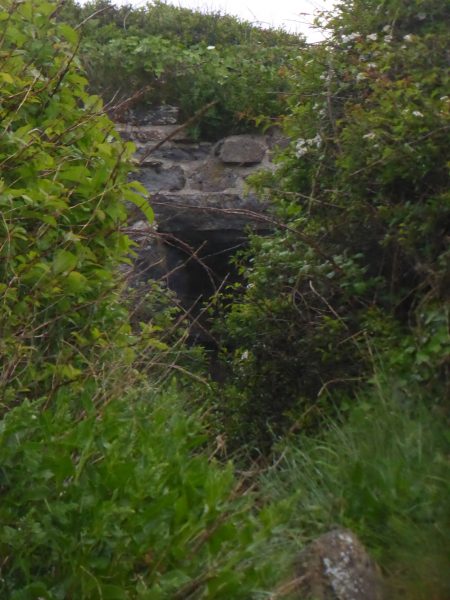 I watch the tide as it starts to come in and fill the harbour.  I am not so sure I would want to be on a boat coming through the narrow entrance with the sharp rocks waiting for a slight misjudgement. 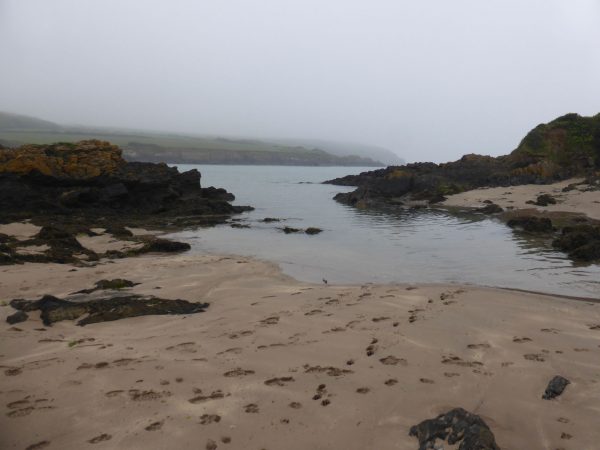 Back in the car we return along the coast road, the mist has thickened and visibility is not great, but we get glimpses of the beach as we round the bay at Freshwater West and when a bit further on we stop briefly at the memorial to the seventy-nine men of the Royal Navy and Royal Marines who lost their lives on the night of 25-26th April 1943 when first the HM Landing Craft Guns LG15 and LG16 and then the rescue ship HMS Rosemary were lost just off the coast in a storm. 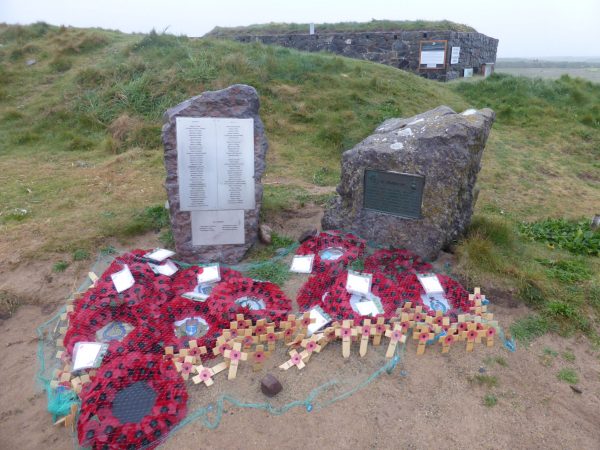 The semi-completed landing crafts were travelling from Belfast to Falmouth and they sought refuge in Fishguard Harbour, but were refused, they then tried Milford Haven but were again refused entry so had to continue on their way.  Seventy-three men on the landing craft lost their lives and six from the rescue boat.  There were only three survivors from the tragedy.  A terrible, avoidable disaster, which must have left a mark on the families of the victims and on the conscience of those who turned them away from safety.  A sombre note to end another interesting day out. 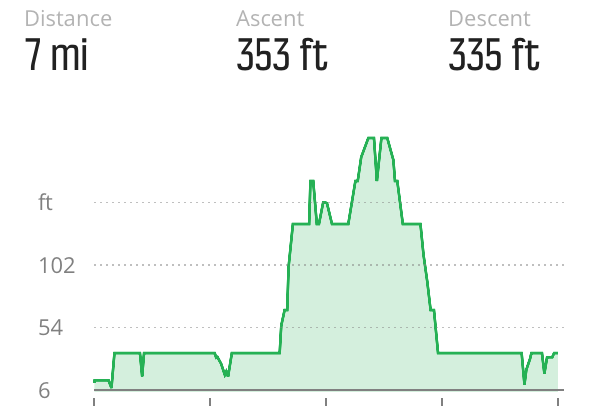