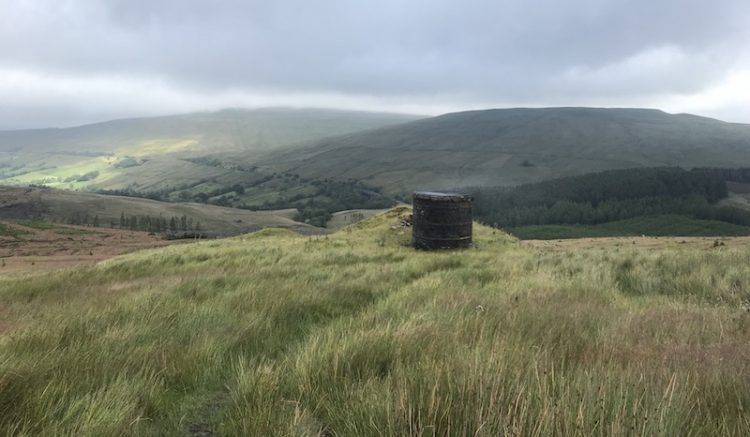 Whilst studying the map last night I was intrigued by the footpath that crosses Blea Moor following the route of the tunnel that carries the Settle to Carlisle railway line.  So today I am heading off to Ribblehead to explore the route.

My starting point is one of the many parking areas besides the B6255 (Grid Ref SD765793).  Leaving the car I head towards the Ribble Head viaduct.  I have been visiting this site for over thirty years but it still manages to impress. 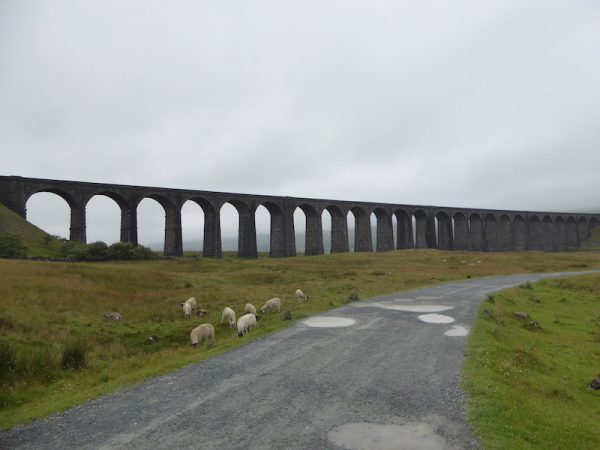 Work on the viaduct, then called the Batty Moss Viaduct, began in 1869 and took 5 years to complete.  To accommodate the 2,300 men working on the site shantytowns developed on the surrounding moorland.  The men worked there for so long that their wives and children joined them. The loss of live was huge, with men being killed on the construction site as well as families being affected by regular smallpox outbreaks.

Along the dale at Chapel-le-Dale the small church had to extend its churchyard to accommodate all the dead.  I am sure many of the tourists visiting the site fail to appreciate the hardship the workers suffered in building this iconic structure.

My route keeps to the north side of the viaduct following the route of the Yorkshire Three Peaks path with the railway line on my left hand side.   During the night we had thunderstorms and the sky has yet to clear. It does not feel like mid-summer as I look towards Whernside. 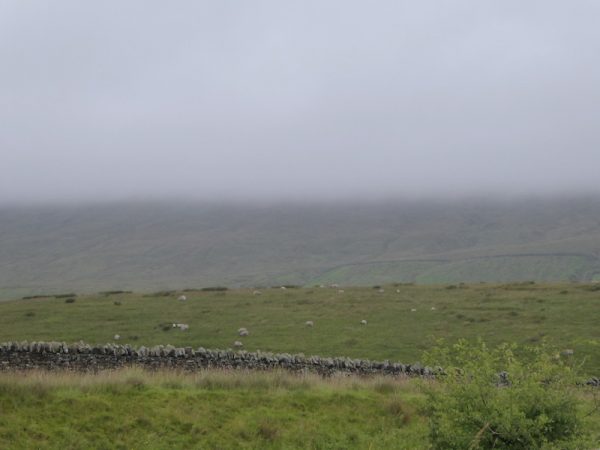 Soon I am passing Blea Moor signal box, this is one of the increasingly small number of manually operated signal boxes.  It is a pretty remote spot to work.  Close by was one of the sites of the construction workers shantytowns. 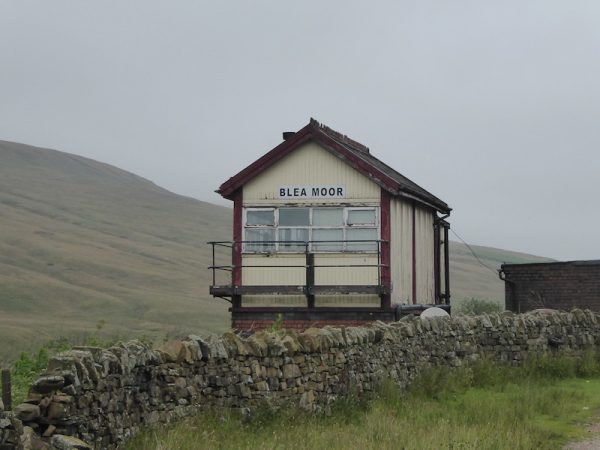 I walked this section of path a few days ago whilst completing the Yorkshire Three Peaks, then it was dry but the overnight rain has water gushing off the surrounding fells. 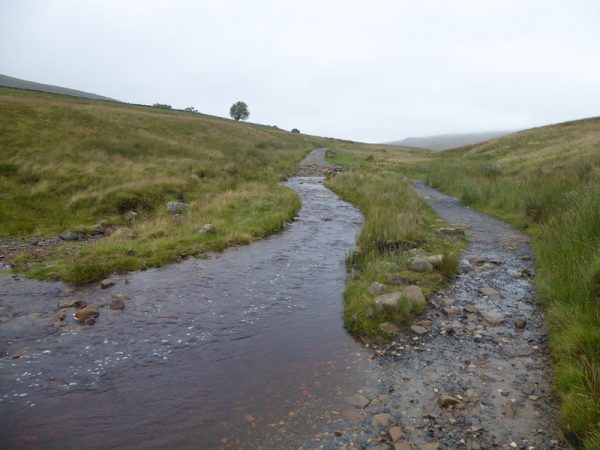 At a fork in the track I go right and start to ascend the misty moor on a stony track that resembles a stream. 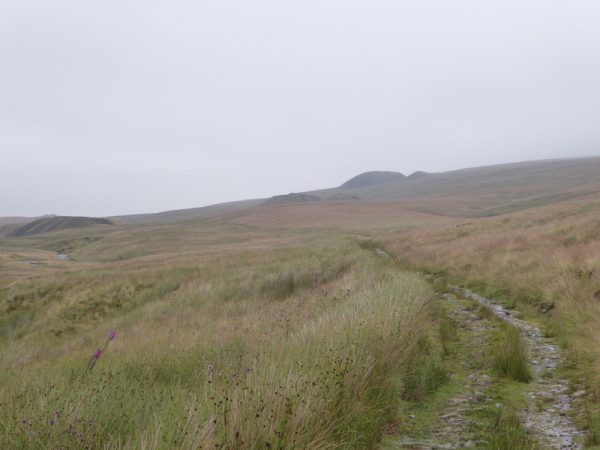 The track heads towards piles of spoil on the horizon, the result of the construction of Blea Moor Tunnel whish runs below this moor. 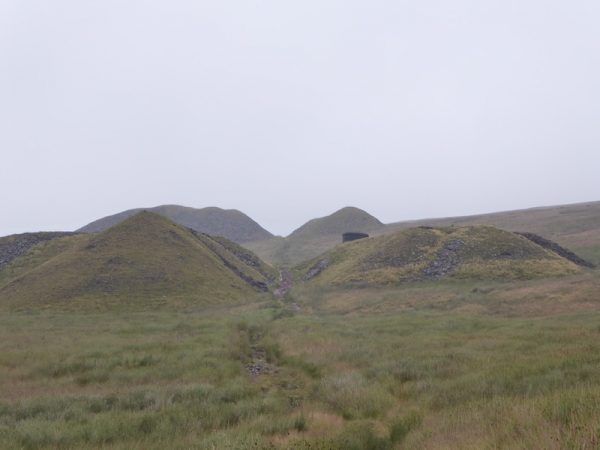 Construction on the tunnel started in 1872 and took four years to complete.  It runs for 2,629 yards, approximately 1.5 miles, under the hill and is an amazing engineering feat. 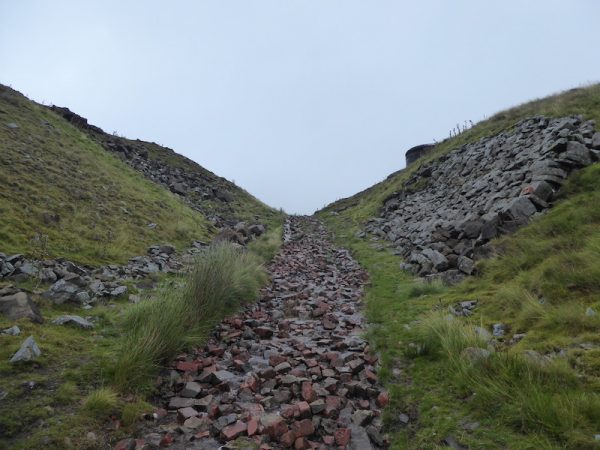 Apparently the construction used seven shafts sunk up to 500 feet into the moor, of these shafts three were retained for ventilation.  As I near one I hear the sound of a train passing below, it is an unnerving sound on the misty moor. 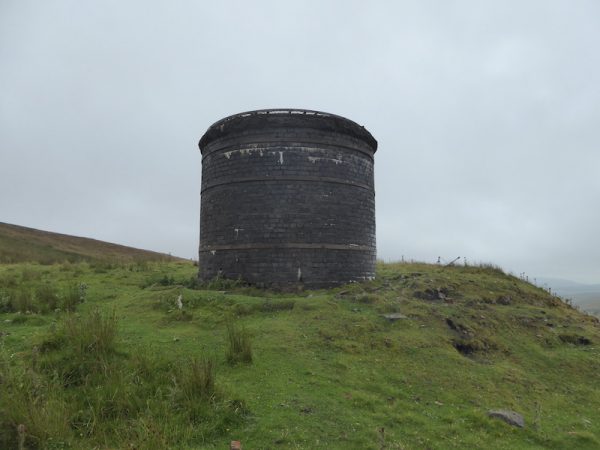 The track now follows the route of the tunnel running below the moor, I head to the second ventilation tower on the track.  Nearing the tower I stop and look back at the route I have travelled. 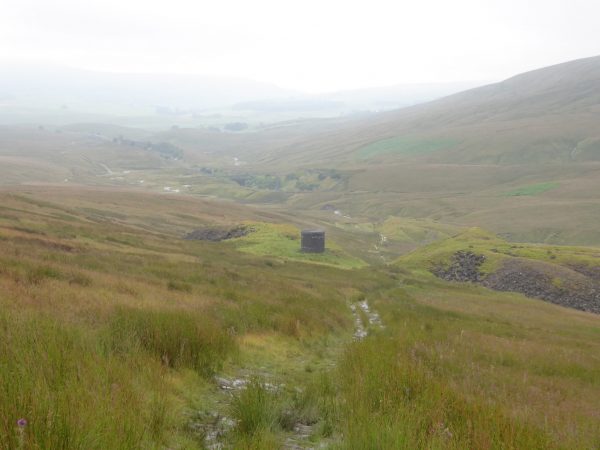 Soon after passing the second airshaft I take a faint path on the right and follow this as it heads across the moor to reach a trig point.  This is the 150th I have bagged. 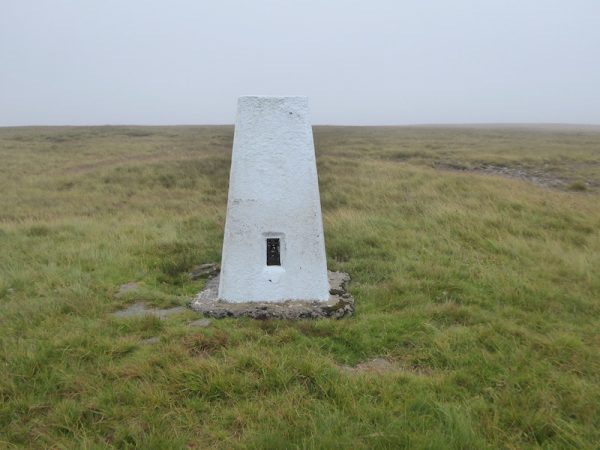 From the trig I head north along the summit of the hill on a well walked path and soon reach a fence line where I turn left and follow a route, which is occasionally a bit boggy, down to join the main footpath. 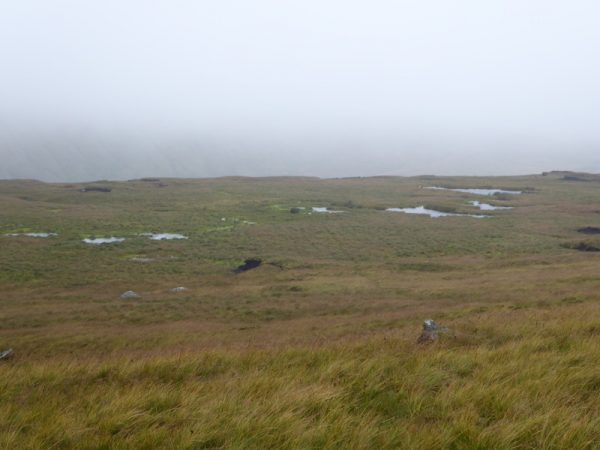 After crossing the fence the path gradually descends towards the third airshaft.  In front of me I can see Dent Head Viaduct. 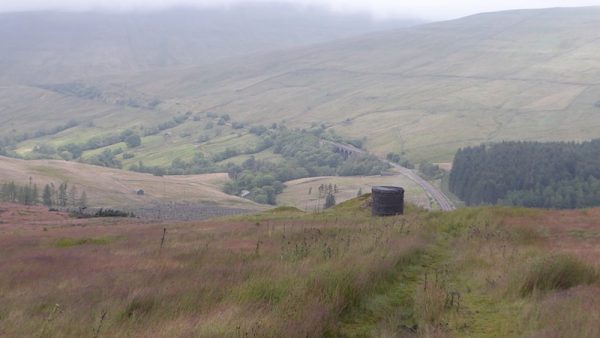 The path heads more steeply downhill to reach an area of recently cleared forestry land.  The path is well marked and easy to follow as it crosses a forestry track and continues downhill towards Dent Head Farm.  Shortly before reaching the farm I stop to look at the waterfalls, the overnight rain has made them an impressive sight. 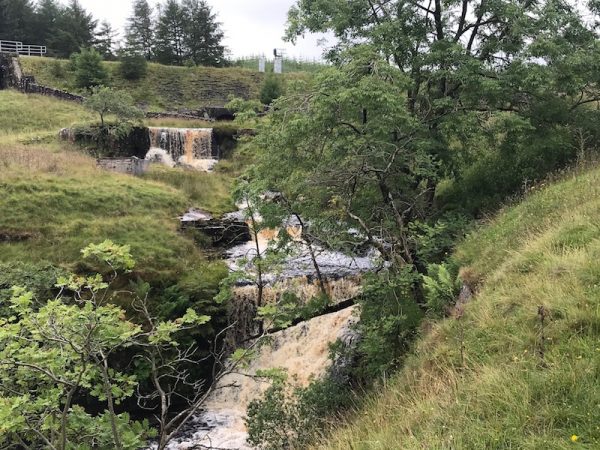 The footpath goes through the farm and then across fields to reach an old arch bridge across the River Dee on the outskirts of Cowgill. 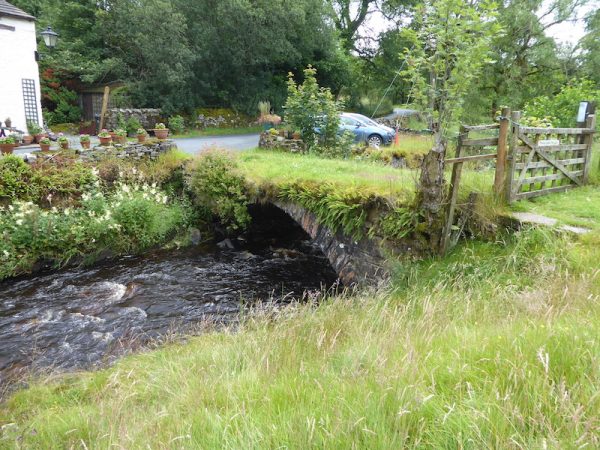 After crossing the bridge I turn right along the road and soon reach Denthead viaduct.  It was built from the Dent marble that was quarried from the area around it.  The marble is actually a highly polished form of black limestone.  Being directly below the bridge I get a feel of its size, but it is difficult to photograph so I focus on the packhorse bridge behind it. 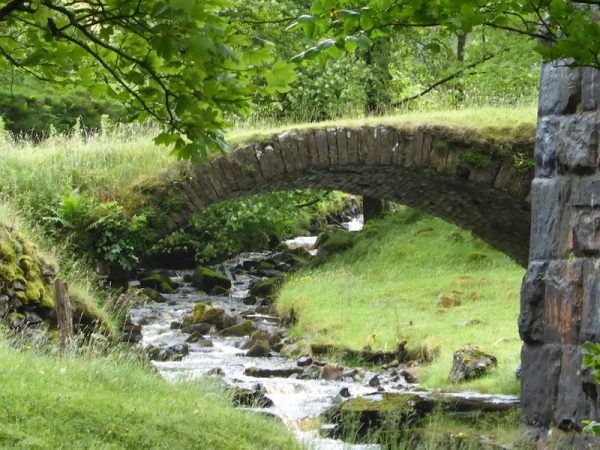 The route now continues on the road, which is also the route of the Dales Way and I stay on the road until I reach the junction with the B6255 where I cross and join a track heading steadily uphill. 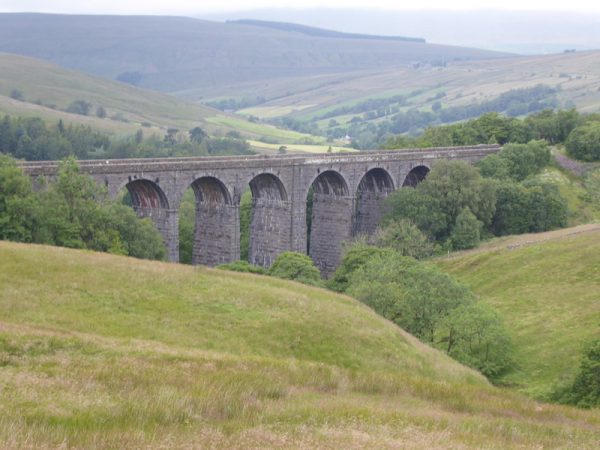 The route continues to rise and is soon on an isolated bit of moor and I am grateful for the stony track to follow.  After passing through a gate I meet a woman walking in the opposite direction.  She tells me that she is heading home to Cowgill after a trip to the shops in Hawes. That is not a quick walk home with the shopping! 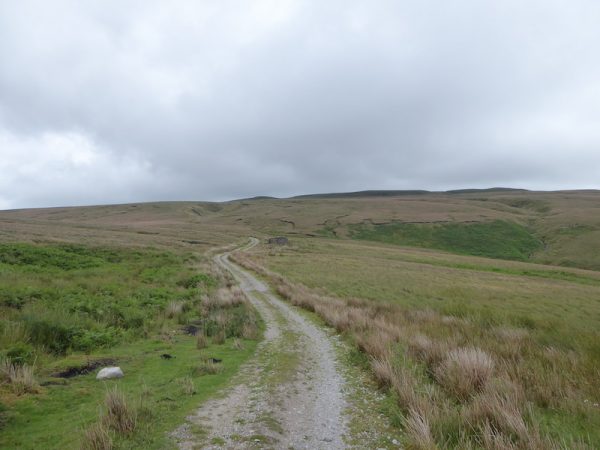 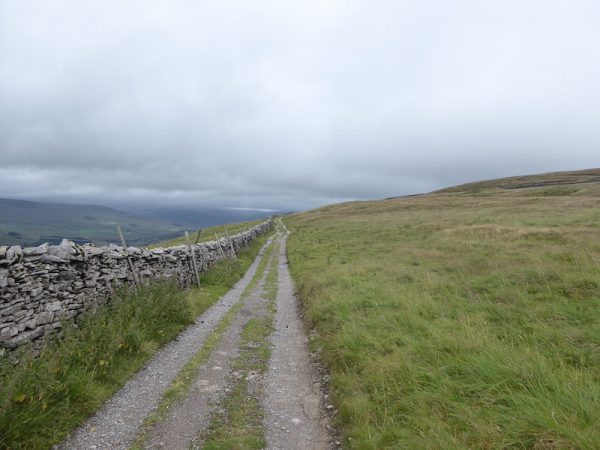 After going through a gate I follow a faint path onto Dodd Fell. The purpose of which is to bag the trig point on top of the fell.  I have read on a trig point website, believe me such a thing exists but is only for the trig obsessed, that this is the route others have taken.  I soon discover this is not a trig visited frequently and the route becomes difficult to follow, occasionally I have to make diversions to avoid boggy land.

Eventually I reach the trig, my 151st.  It is a bleak damp spot and as I take the obligatory picture the weather starts to close in.  I am conscious of being on my own on this moor so give Lynnie a quick call to let her know my location.  I then start to head off the moor.  Initially I follow the route I came up on, but spotting what looks like a clearer path follow this. 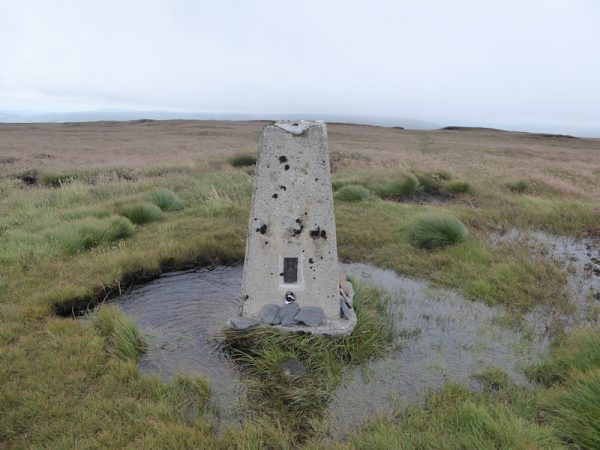 I am not proud of my actions on the next section of the walk for despite all my hillwalking I made a basic error.  The weather had cleared and I had a view in front to me of what I took to be Ingleborough and I knew that was the direction I needed to go.  I did not consult the map, or use the OS app on my phone to check my position and boldly continued downhill.  Soon I was traversing an area of boggy land, but then I saw a dry stone wall and that incorrectly reaffirmed in my mind that I was on the right route heading to the track.  The next section was extremely boggy and hazardous, but safe in the knowledge that I was only a few yards from the track I continued to plot a route. As I got within a few yards of the wall I realised with horror my error.

It was only then that I consulted the map and the OS app on my phone.  I had mistaken Pen-y-ghent for Ingleborough and gone in the wrong direction!  The view of Pen-y-ghent from this side is not one I have previously seen and it differs significantly from the sharp edged mountain you see from Horton-in-Ribblesdale.

Not wanting to return across the boggy moor I reassessed my position and after a couple of abortive and rather scary attempts to find a firm route I decided I needed to cross the dry stone wall and follow the line of an old wall down to a tarmac track.  It was with huge relief that I reached firm ground! 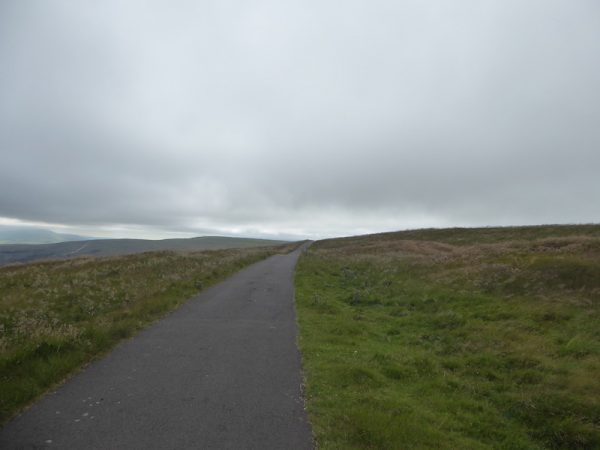 On the tarmac road I turn right following this route back towards Kidhow Gate.  It is only as I walk along this road that I contemplate the stupidity of my error.  I know the bogs are dangerous and I also know going off piste in such terrain without a phone signal can be hazardous. Needless to say I will be more careful in the future.

At Kidhow Gate I turn left and re-join the Cam High Road and follow this stony track, which soon starts to descend. 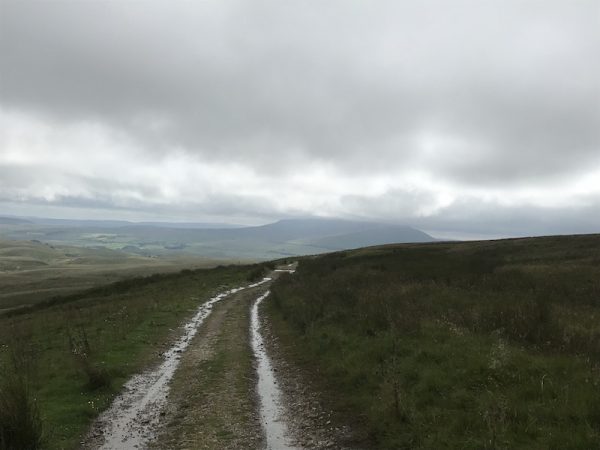 After my exploits on the moor it is good to have firm ground under my feet and I make steady progress, passing through gates I continue downhill and fork right onto the Dales Way at Cam End where the path divides. 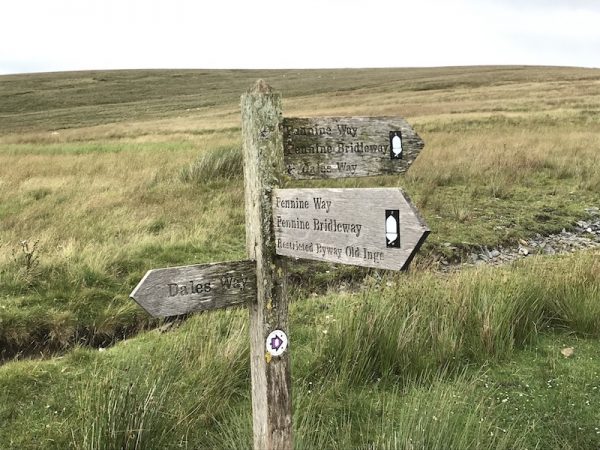 Now in the distance below me I can see the Ribblehead viaduct. 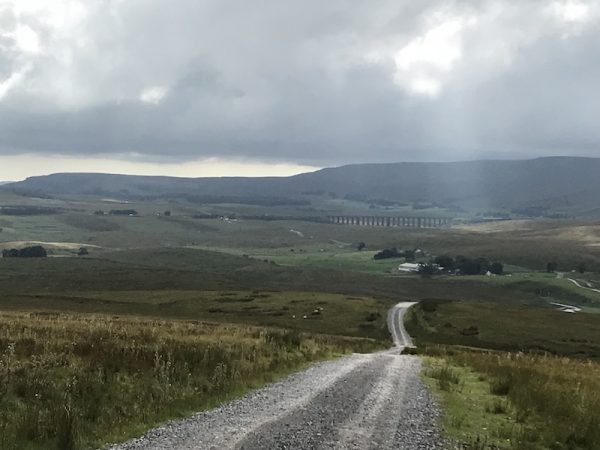 The route takes me over Gayle Beck. 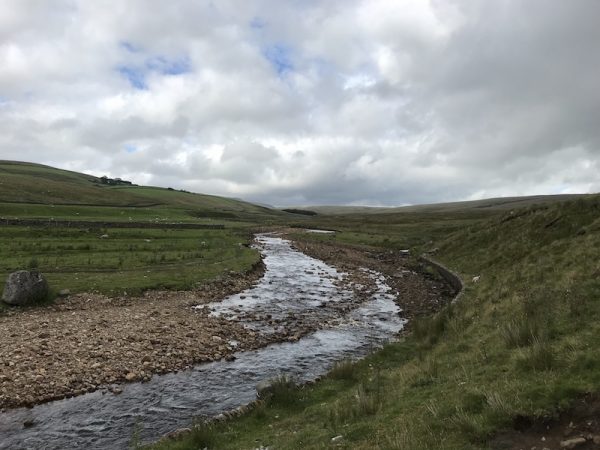 I then continue on to reach the B6255 and turn left to follow a path close to the road, which leads me back to my starting point at Ribblehead. 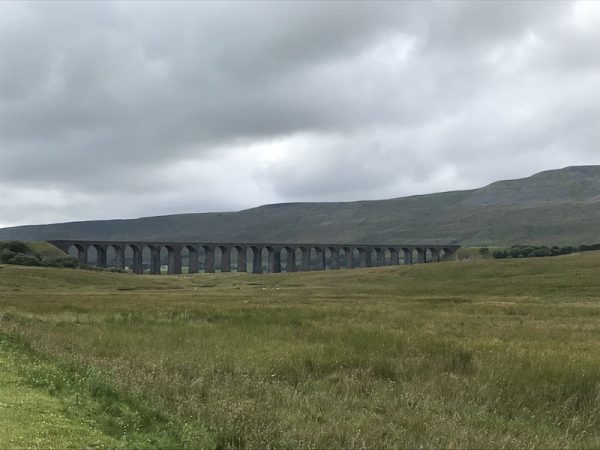 My walk has covered 17 miles; it has been interesting and eventful.  I know for sure that it will be a long time, if ever, before I venture back on to Dodd Fell!

Note of caution – If you are going to follow this walk take care on Dodd Fell, it contains areas of hazardous peat bog and the route I took from the summit is not to be recommended.