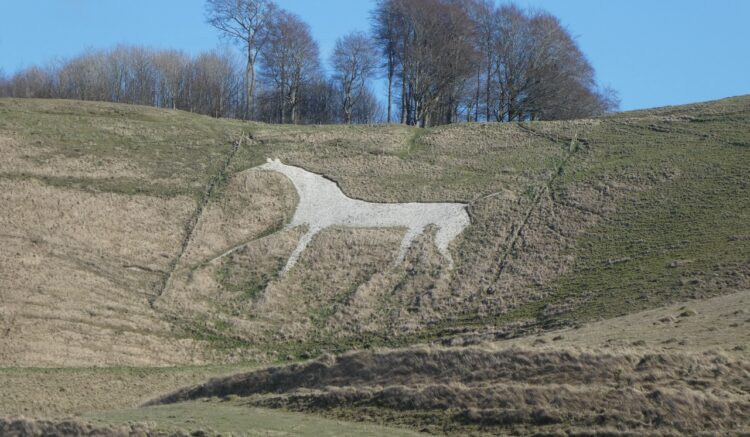 Earlier in the year my walking buddy Mandy suggested we try and visit every white chalk horse in Wiltshire as part of our 2020 walks.  At the time it seemed an easy task, but with the current developments around the Covid-19 pandemic this might become more challenging.  The current guidance from the government is unclear, other countries have restricted travel but at the moment no such measures have been introduced.

The starting point for our walk is the large car park on Station Road (SN10 1BZ).  We start our walk by walking back along Station Road to reach the Market Place with its magnificent Market cross built in 1814.

We cross the Market Place and wander through the covered market and continue along the road to reach the A361, we cross by the Caste Hotel and turn right to follow the A361 and then besides a roundabout turn left into Commercial Road.  At a mini roundabout opposite the Community Hospital we turn right and head down New Park Road.  On reaching the Kennet and Avon Canal we turn right to walk along the tow path to reach the London Road Bridge.

We are walking by the back of houses and out of the town and soon pass under Coate Road Bridge.

I always enjoy walking besides canals and have long thought about walking the route that goes from Westminster to Bristol following the Thames towpath to Reading and then picking up the Kennet and Avon canal to Bristol.  The whole walk is around 165 miles long of which 90 miles is along the canal.  During our travels I have walked various sections of this canal, but this stretch today is new to me.  We now pass Devizes Marina.

We continue under Laywood Bridge and are now out in open countryside.  The next bridge we reach is the Horton Road Bridge with the Bridge Inn sat beside it.

The track leads us by the entrance to Court Farm Caravan site.  Both Mandy and I are caravanners so we stop to look, but the site would not suit me as it does not have electric hook ups.  We stay on the track and then join a minor road for a short distance before turning left to walk down a lane to visit the church of St Mary the Virgin.

After looking at the church we return to the minor road and head straight across to join a footpath that goes across fields towards Bourton. The streams in this area are the source of the River Avon, which flows south from here and is a substantial river by the time it gets to the other side of Salisbury just over twenty miles way.  At a junction of paths we turn left and walk into Bourton soon joining a minor road.  At a junction we turn right and follow the country lane to a fork in the road at a post-box.  We go left and follow this track as it heads steadily upwards towards the downs.  At the end of the lane there is a fork in the track.  We go left heading westwards and stay on this path, which does not appear to be frequently used, until we reach the A361.

We cross the main road and take a footpath opposite which continues uphill to reach a road where we turn right and walk besides it.  There is no pavement so we are cautious of traffic, after going over the brow of the hill we ignore a bridleway on the left, instead we continue a few hundred yards downhill to reach Hill Barn Cottages.  Here we take a footpath along a track which passes through the farm buildings and then continues north with Furze Knoll on the downs in front of us.

At a crossing of paths we turn right and go in a north easterly direction along a drove.

After crossing the Wansdyke Path we carry straight on to pass the entrance to Baltic Farm.  After three quarters of a mile we turn left on a footpath and head north crossing a footpath that runs  along a Roman Road.  We have joined the Wessex Ridgeway and White Horse Trail which we follow uphill towards the Lansdowne Monument at Cherhill.

Passing through a gate we enter access land and continue uphill.  To our left is the impressive bowl in Calstone Down.  Mandy and I recently did a map reading and navigation course, part of which featured the use of contour lines for navigation.  This is certainly a good area to compare the map to the landscape in front of us.

This monument, also known as the Cherhill Monument, stands at 125 feet high and is a clear landmark.  It was erected in 1845 by the 3rd Marquis of Lansdowne to commemorate his ancestor Sir William Petty (1623-1687) and was designed by Sir Charles Barry, the architect of the Houses of Parliament.  Petty was the son of a cloth maker and studied to become Professor of Anatomy at Oxford.  He served as Physician General in Oliver Cromwell’s Army in Ireland and whilst there reportedly conducted the first land survey of the country.  After the restoration of the Monarchy he was appointed a Commissioner of the Royal Navy by Charles II.  He was a founding member of the Royal Society and attained great wealth.

The lower parts of the monument are clad in timber with a rubble guard, this was first erected in 2013 and the National Trust, who now own the site recently sought a further five-year extension to retain this protective structure.  Apparently, they need this extra time to raise the £2.7m required to restore the monument. It is reported in local newspapers that the National Trust said they might close the entire site if the permission for the protective structure was not granted.  It is a pity that between the National Trust and the current Marquises of Lansdowne they cannot find the funds required to ensure continued safe public access to the site without the need for the unsightly cladding.

We use the monument to shelter from the chilly wind whilst we eat our lunch.  On my walks I have stopped to eat my sandwiches and soup in some stunning locations, this must rank in the top ten.

From here we head off on the northern side of the monument and immediately see the Cherhill White Horse.  This is the second oldest of the remaining eight white horses in Wiltshire.  It was first cut in 1780 and over the years has been scoured a few times, most recently in 2002 when it is reported that one hundred and sixty tonnes of new chalk were added.

We decide to view the white horse from lower down so walk around the top of it and then descend steadily on a path to the northern edge of the access land where we turn left.  From here the horse looks stunning.

The route we take follows the fence line along the northern edge of the access land to reach a drove.  Here we turn left and walk uphill and after going through a gate turn right to follow a path descending across access land.  At a crossing of paths we turn left and head south to reach a track.  We turn left and then immediately take a path on the right that follows a track to cross the River Marden.

Soon after crossing the river at a junction of paths we turn right to pass South Farm and then take a footpath on the left that heads uphill through muddy paddocks and then carries on across fields to a copse.

The map shows the path going diagonally over the next field, however the route appears to have been diverted to go along the edge of the field where we continue steeply uphill.  At a fork in the track we go left and carry on across a track and then head more steeply up towards the wireless station on Morgan’s Hill.

Apparently in 1913 a Marconi Imperial Wireless Chain receiving station was built here, this was converted to military use in 1916.  From 1920 to 1929 it was the base for the first British long-range maritime communications station.  More recently it was used by Wiltshire Constabulary for radio communications and in recent years has been used for mobile phone telecommunications.

We carry on to reach the impressive Wansdyke which we cross to make a brief diversion to Furze Knoll.  We follow the fence line and then pop through a gate to cross the stubble to reach the damaged trig point on the top of the hill.  This is the 198th I have “bagged”.

After bagging the trig point we retrace our steps to the Wansdyke and turn left to walk west following the route of this early medieval dyke that once spanned the Western part of the Country from Savernake Forest towards the Severn Estuary.  The part we are on is a section of the remaining Eastern Dyke which is nine miles long.

We stay with the dyke path until we reach a footpath on the left that heads across the North Wilts Golf Course.  This is the route of Mid Wilts Way and the Wessex Ridgeway.  The signs across the course are clear and we pass the clubhouse and cross a road to join a drove heading south.

In this area on the 13th July 1643 the Battle of Roundway Down was fought between the Royalists, led by Lord Wilmot, and the Parliamentarians, led by Sir William Waller.  The day ended in a resounding victory for the Royalists.  As we walk along on this sunny spring afternoon it is difficult to imagine this was once the site of a bloody battle.

After passing a parking area near a plantation we start to descend and soon join a minor road and then follow a permitted path that runs down the side of the field parallel to the road.  On the hill behind us is the Devizes White Horse, it is the most recent of the Wiltshire White Horses and was cut in 2000 to mark the Millennium.  It is the only one of the remaining eight Wiltshire White Horses to face to the right, there are only three others in the Country that look to the right.

The path leads into Roundway where we stay with the road heading south, leaving the hamlet we take a footpath on the right, at a junction of paths we go left and head back towards Devizes.  This path is known as Quakers’ Walk, apparently it goes back over 700 years with the gates at the southern end marking the edge of the Roundway Estate.

Interestingly the website for Devizes Quakers suggests the route was originally called Keepers Walk because the house by the gates was occupied by the park Deer Keeper.  However, it became the route that the Quakers living in nearby Bishops Cannings took to walk into Devizes.  Now the name is also associated with a large housing development which borders the edge of the walk.

After passing the gates we reach Park Bridge over the Kennet and Avon Canal, this is the point where we started our walk along the canal.  Now we follow the road into the centre of Devizes and from the Market Square return to the car park in Station Road.

Our walk has covered 18 miles and we have enjoyed some stunning views and interesting countryside along the way.  Now that we have bagged our first two white horses of the year it is time to start planning trips to the other six dotted around Wiltshire.