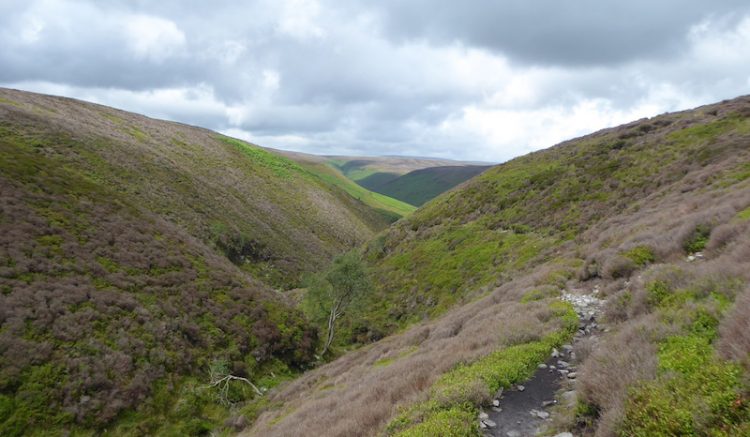 Whilst staying at Brigholme Farm CL I usually walk in the local area. I have rarely headed towards the Trough of Bowland over the border in Lancashire. It’s not that far away, but I was put off walking there a few years ago when I set off with the dogs only to discover that parts of the access land prohibit dogs other than on footpaths. My route that day was a clear track, both dogs were on short leads, but the signs made it clear it was not a footpath and dogs were not allowed. To avoid a similar situation I am leaving Crosby behind today and walking solo.

My starting point is a small parking area a few miles north west of Dunsop Bridge (Grid Ref SD632511).  First I wander across to look at the memorial to the twenty -five service men that died in air crashes in the Forest of Bowland between 1940 and 1949. The men came from Britain, America, Australia Canada, New Zealand and Poland. 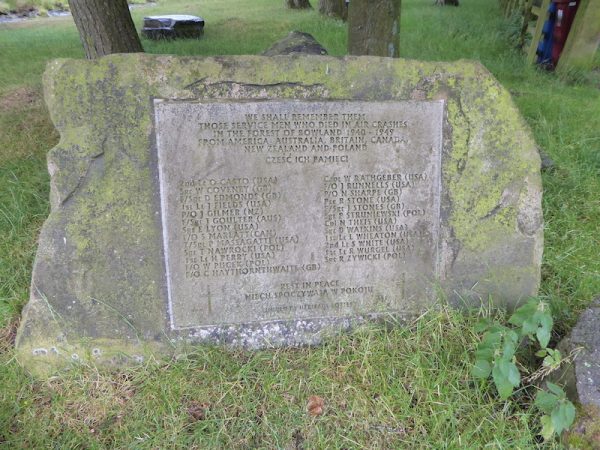 My route starts by walking up a track besides Langden Brook; within a few hundred-yards I take a footpath on the left to reach a bridge, which crosses the brook. 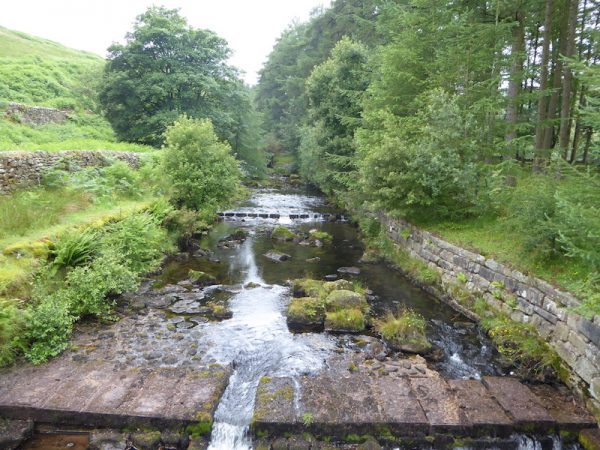 I now turn to the left to follow a path on level ground with the brook on my left. The ground is initially a bit boggy but quickly gets firmer. 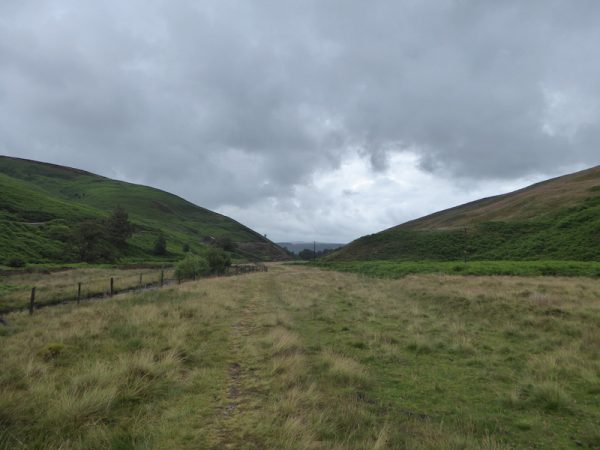 Soon the path runs besides the brook and a dry stone wall. 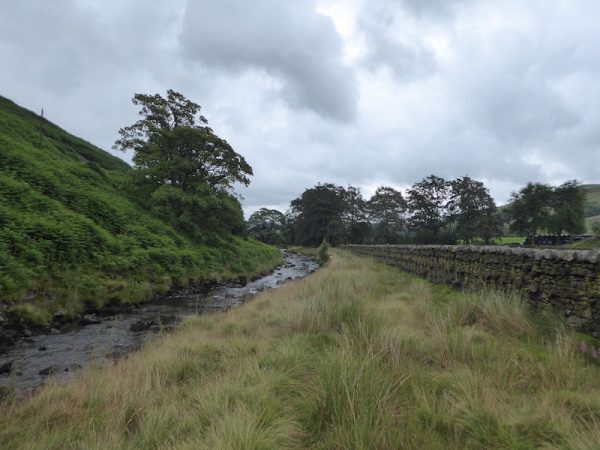 I then take a path on the right leading across fields to reach the driveway of Hareden Farm. The track leads through the farm and continues along by a stream. At a footpath sign on the left I leave the track and follow the path as it starts to head uphill. Passing the edge of Riggs Plantation the path continues to ascend to reach a track, here I stop to admire the view behind me. 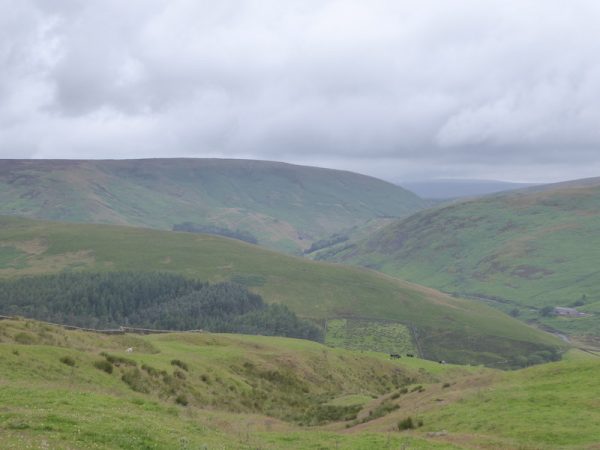 After a while at a junction of paths I turn right following a path besides a dry stone wall still heading upwards. I can clearly see my intended route to the hill summit. 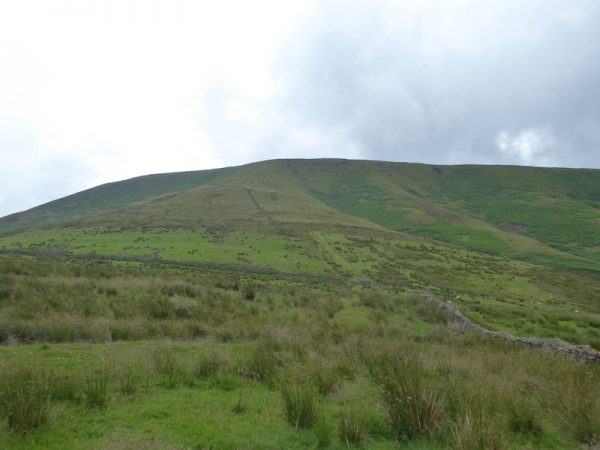 This is a long steady uphill slog, the path passes through some marshy land but nothing too concerning because the weather has been so dry recently. After crossing a fence the route gets steeper, and the views more expansive. 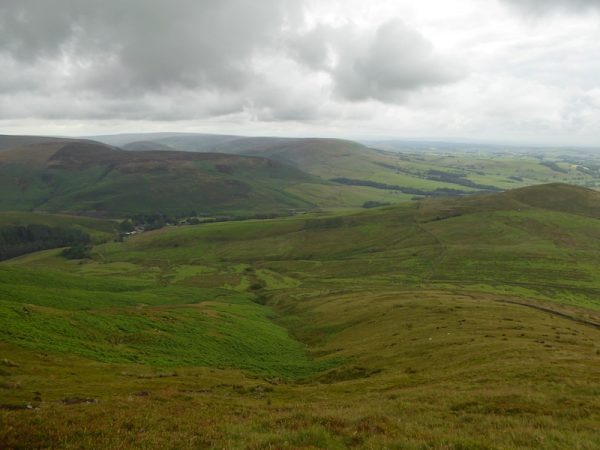 At the top of the ridge I turn left and follow a well-walked route towards the trig point at Totridge Fell. This is the 148th I have bagged, the area around it has been eroded and the trig stands precariously. 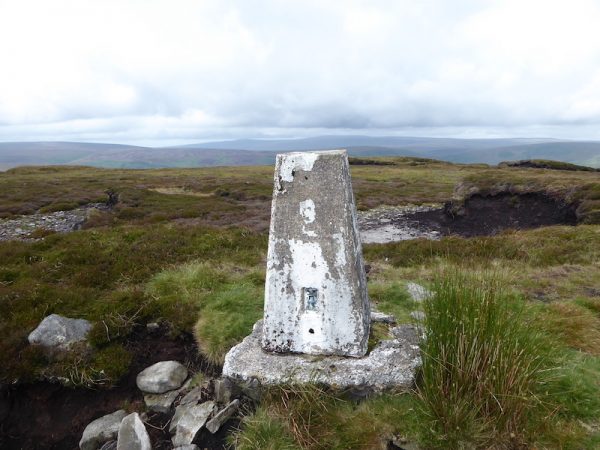 On the trig is a memorial plaque to Bill Smith (1939 -2011) who died on these hills. Apparently Bill was a legend in hill running circles, he wrote on the sport and was a very experienced runner. However tragedy struck on 10th September when he set off on a run in the trough of Bowland, his body was discovered three weeks later in a peat bog on Saddle Fell. 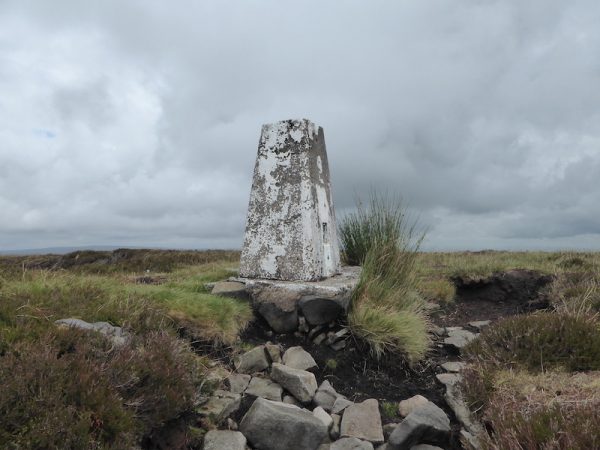 It was only after I finished my walk that I read about Bill’s demise, had I known about it earlier I might have thought twice about heading on to the moor alone. The route now heads southwesterly and soon runs besides a dry stone wall. 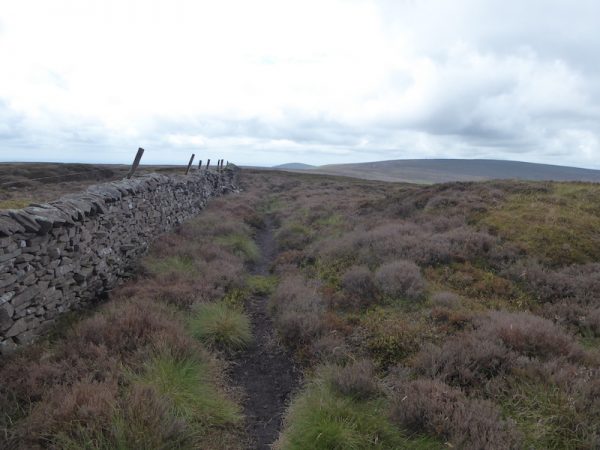 It is clearly well used and the dry conditions make some of the boggy areas easy to negotiate. 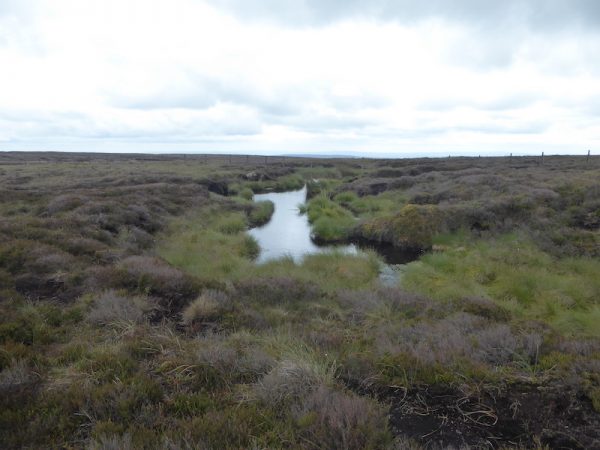 I stay on the track until I reach Beasley’s steady. Before setting out I had checked the routes others had mapped on this moor and knew there was a route that would take me from this point to a path besides Bleadale Water.

I soon discover that there is a distinct difference between knowing a route is there and being able to follow it through the heather. My twin fears when walking on moorland are bogs and adders. So the walking pole comes out to test the ground and I proceed with caution. 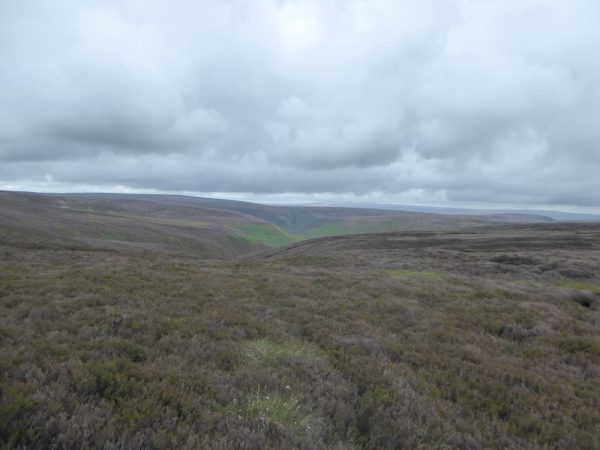 Thankfully my navigation skills are good enough to get me through the heather to the head of the glen. 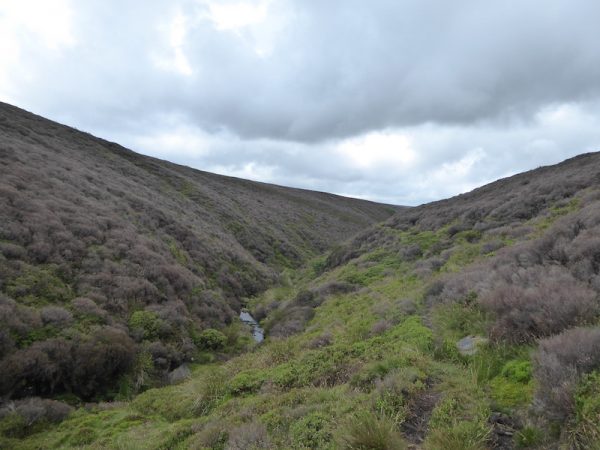 The route is now straightforward; I follow the narrow path in a northerly direction besides Bleadale Water. The scenery is spectacular; I am soon passing a waterfall on the opposite side. 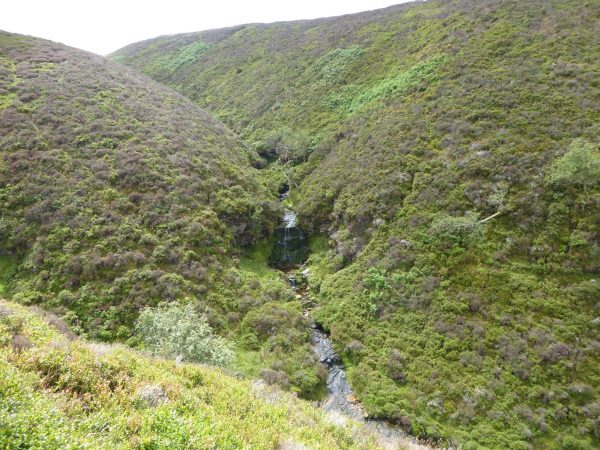 This is a very remote spot, so I walk with care along the rough path. The view is a corker. 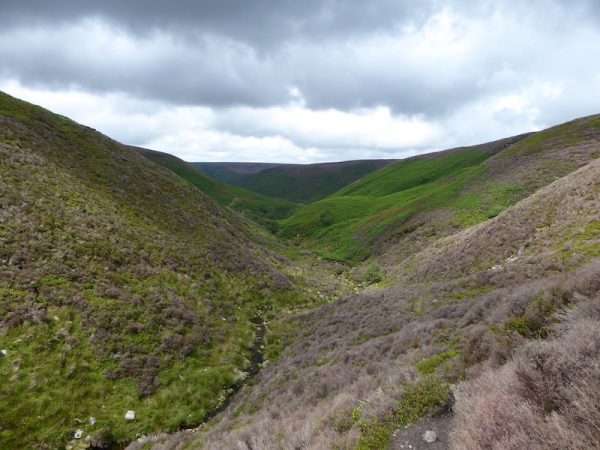 As the river broadens the path runs closer to it and then crosses it before heading towards the ruined Langden Castle. 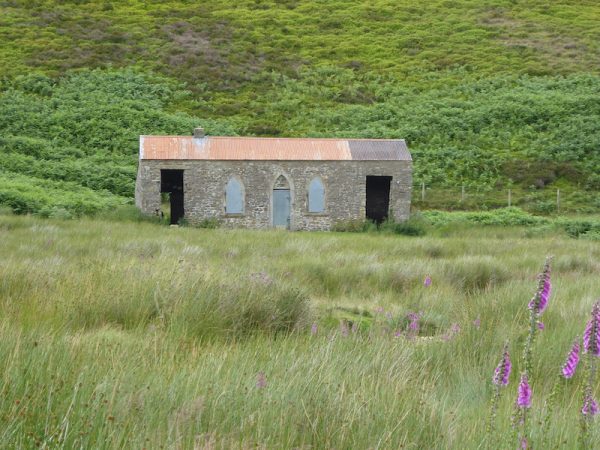 The path joins a track close to Langden Castle. This is a strange building that on first impression looks like a barn and is apparently used by shooting parties. However, it is rich in history. The castle lies on a medieval track between Whalley and Lancaster. It is said to have been used to house prisoners on the way to the assizes in Lancaster.

I turn right and follow the track as it heads above Langden Brook.  Soon I reach a memorial to three airmen who died in separate accidents on these moors in the 1940’s. 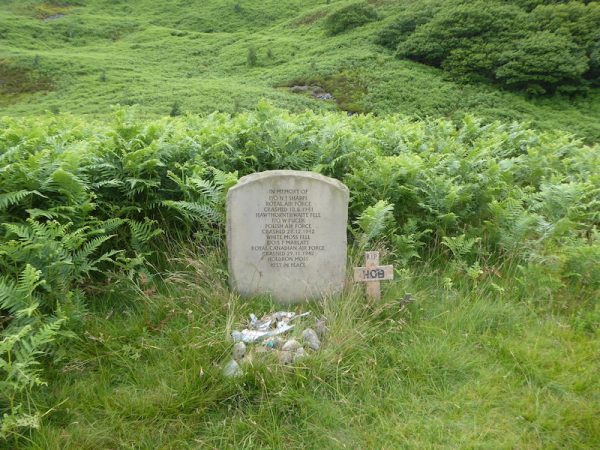 At a fork in the track I go right to follow the route steadily down the valley. 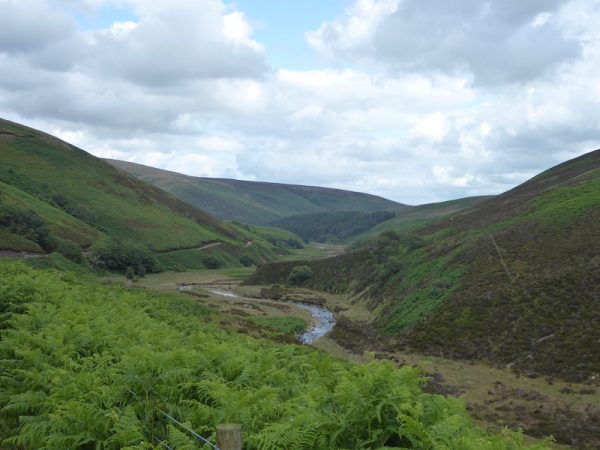 Further along the track I reach the Langden Brook intake, the information board explains that this was built to collect water for domestic use. 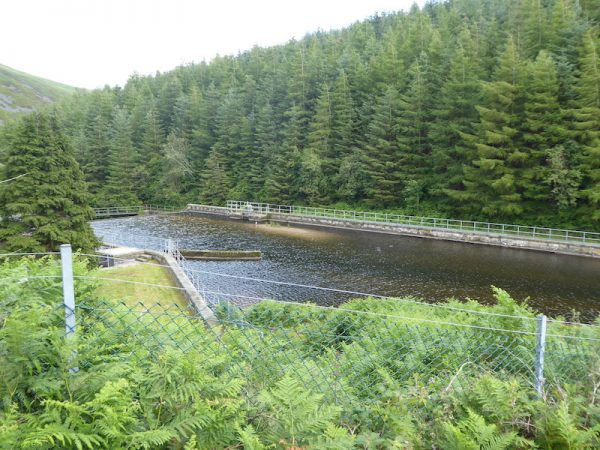 The route is now very straightforward the track leads back to the car park from where I started. Today’s circuit has covered close to eight miles and has been a stunning walk, albeit a bit challenging in finding a route through the heather at one stage.

Now it is time to head back to the caravan at Brigholme Farm CL and take the dogs out for a walk.

To follow my walk you will need Ordnance Survey Explorers OL41: Forest of Bowland and Ribbledale