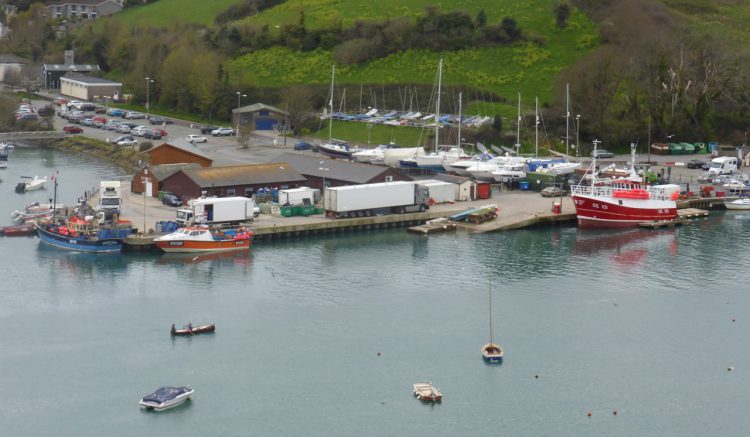 A couple of days ago when we were walking around Salcombe we passed Overbeck’s House, at the time we were midst walk and did not have time to stop and explore this National Trust property. However, today Lynnie has decided that she will visit there whilst I go off walking with the dogs.

We park up close to South Sands and wander along the road towards North Sands and then up to Overbeck’s. Here Lynnie waves us goodbye and the dogs and I continue on the footpath as it climbs, ignoring a path to our left we are soon in fields and at a junction of paths turn left to head towards Bolt Head. 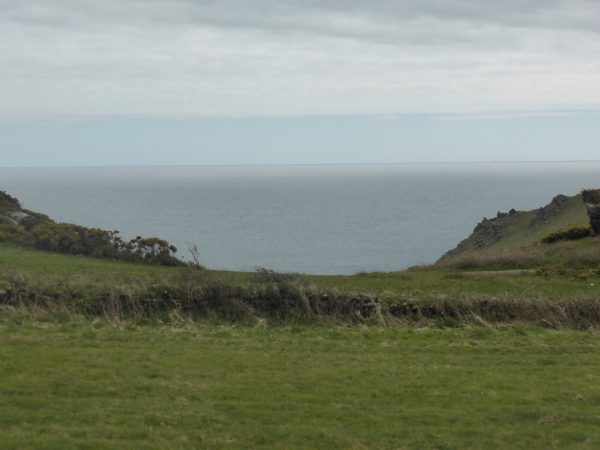 It is a stunning day for walking, no sign of rain and not too warm. I soon reach a busy intersection of paths and turn to the right to head back inland to East Soar Farm. We passed through here a couple of days ago, today there is a party of school children enjoying their time at this outdoor educational establishment. 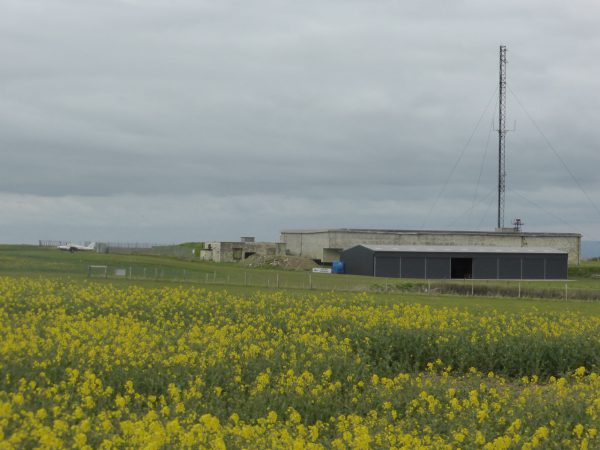 Following the track out of the farm the route takes me past the site of the old RAF Bolt Head site. Still in use today as an airfield for light aircraft this site had significance in the defence of our shores. The information boards here are very informative and from them I glean that in 1940 two air strips were cut out of the field and laid with coconut matting and metal grips. Thus the airfield was formed and canvas tents erected to provide cover. In 1941 the airfield expanded with the addition of the Ground Control Interceptor Station, RAF Hope Cove. This was part of the chain of secret radio stations used to control flights. The Woman’s Auxiliary Airforce (WAAF) plotted the flights. During the war Lynnie’s mum was in the ATS and had a spell stationed at Exeter plotting flights, so she would probably have been in contact with people stationed here.

Planes returning across the Channel frequently made emergency landings at this airfield on the cliff edge. However, it’s location made it hazardous for stricken aircraft and sadly some failed to make it over the cliff.

In 1952 the station became known as ‘Rotor’ radar base and then in 1959 it was converted into one of the government’s 17 secret nuclear bunkers. It had it own sewerage system, water and filtered air supply and was ready to house members of the military, civil servants and scientists in the event of a nuclear attack.

I am old enough to have been taught at school what you should do in the event of a nuclear attack. As I recall the advice was to get into the understairs cupboard and if you lived in a bungalow (like we did) get under a table. There was no mention of ensuring you had access to filtered water and air supply or the need to be under a table in a massive concrete bunker.

What with the threat of nuclear attacks, worry about escaped pumas (I am still awaiting news that they have been caught) and what appeared to be daily news stories about mass murderers it is no wonder that I struggled to sleep as a nipper.

In a rather pensive mood I continue my stroll heading inland along the tarmac road for almost a mile before turning right to follow a footpath along a drove that passes Furzedown Farm and Portlemore Barton before rising into the village of Malborough. 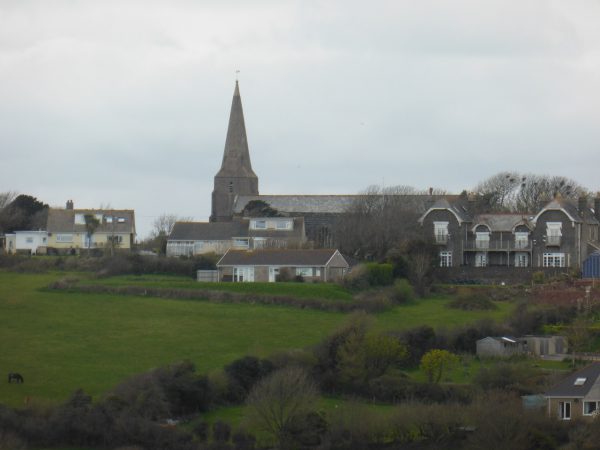 At the cross roads in the village I turn right to follow the path that runs besides the busy A381 back towards Salcombe. After three quarters of a mile I cross the road to take a footpath that follows a track down towards Yarde with its splendid old farmhouse and buildings. The route is clearly marked and soon heads into woodland where a fallen tree provides a convenient picnic spot amongst the bluebells. Sat here with the birds singing and the sun shining through the trees that are breaking into leaf, I am all alone with nature and feeling safe (apart from the Puma that is bound to be lurking here ready to attack in an unguarded moment). I ponder about a world where nuclear bombs are at risk of being dropped on unsuspecting people and the evil that man can inflict on his fellows. Whilst I am distracted Dexter seizes the opportunity to help himself to the final mouthful of my sandwich! Perhaps I should focus on the issues at hand (or as I have just found, no longer in my hand) rather than worry about the World’s problems. 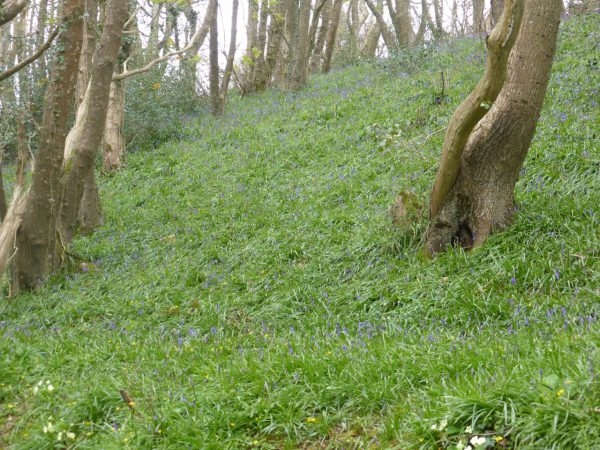 Resuming my walk I continue along the footpath until it reaches the large caravan park at Alston Farm, here I meet a road and turn left to wander uphill towards Woolston. In this small hamlet I take a track that heads up besides a farm and crosses fields to reach a road where I turn right towards Rowden Cross, keeping straight on at the junction I descend to Blanksmill Bridge. After crossing the bridge I take a footpath on the left towards Ilton Castle Farm.

Approaching the farm I see they are busy preparing their campsite for the new season arrivals. A lady is out on a ride-on-mower cutting the field. Later in the summer we will be visiting Cholsey Grange CL and I will be on grass cutting duties. I stand and admire this impressive bit of kit and wonder if I can persuade Ted at Cholsey Grange to invest in a similar bit of kit! 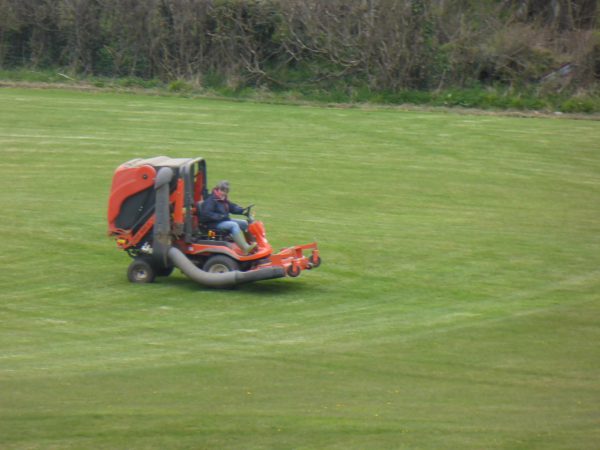 After passing by the farm the route meets a track for a brief section and then it is back into fields. There is a stile in the corner of the field that is almost impossible to cross with the dogs. It is high and has been constructed in a way that means the dogs must be lifted over. Not an easy task with two 25 kilo Labradors. Cursing the obstructive nature of some landowners I continue up to Horsecombe Cross.

Here I turn left along the road to follow the route that Lynnie I took a few days ago to Lincombe Cross and then on the National Trust paths around to Snapes Point with its stunning views across the Kingsbridge Estuary. 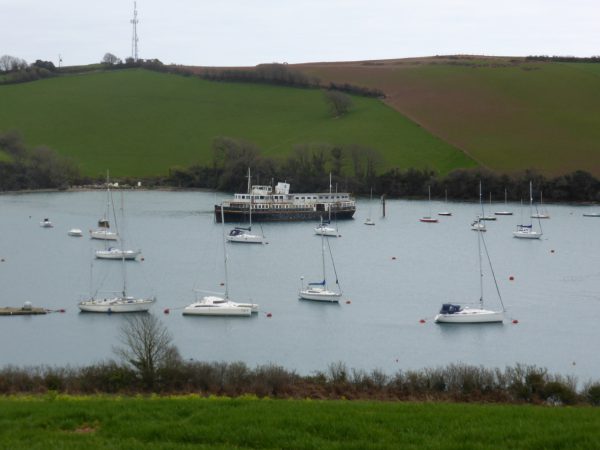 Walking from Snapes Point towards Snapes Manor I look across to Salcombe and see a couple of trawlers setting out to sea. 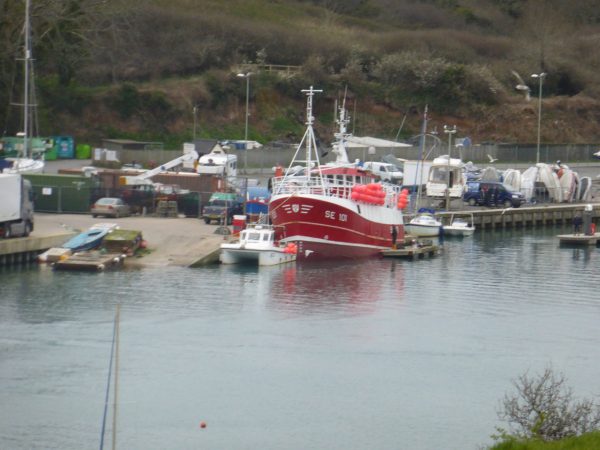 After Snapes Manor I take the footpath leading downhill and skirting the Manor to join a road that leads to the pretty hamlet of Lower Batson. From here I follow the road on the opposite side of the creek taking me back into Salcombe where I meet Lynnie outside of the Salcombe Ice Cream Dairy. She is disappointed because she has arrived too late to make a purchase.

We walk back together through Salcombe along the road (doubling as the Coastal Path) to North Sands where the car is parked. As we walk Lynnie tells me about her interesting trip to Overbeck’s. I might even persuade her to blog about it.

My Suunto Traverse calculates the walk as almost twelve miles, a cracking afternoon’s wander. It is time to head back to Coldharbour Farm CL to start packing up for moving day tomorrow.