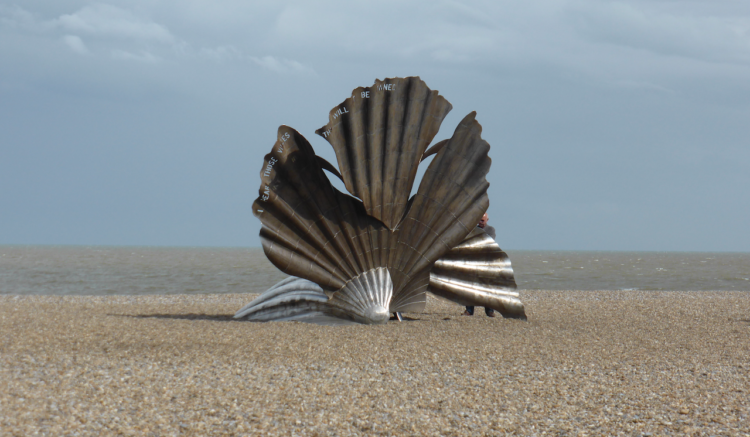 I have noticed that the first morning at a new site the boys are eager to get out and check out their new territory. I have been looking at the map planning an excursion for later so our pre-breakfast walk is similar to the one we did yesterday evening, but missing out Knodishall Common and the far side of Snape Road. It is just short of three miles so we’ve earned our breakfast.

Our major walk of the day sees us leaving the site through the thicket that takes us onto the footpath leading to Sandlings Way. Sandlings Way is a fifty-eight mile walk through Suffolk from just east of Ipswich to Southwold on the coast. We are joining it about mid point and will not be going all the way to Southwold.

Once on the Sandlings Way we follow it all the way to Sizewell. Our route takes us passed North Warren where we see deer, along the disused railway line and then by Sheepwash Crossing and Thorpeness Golf Course. 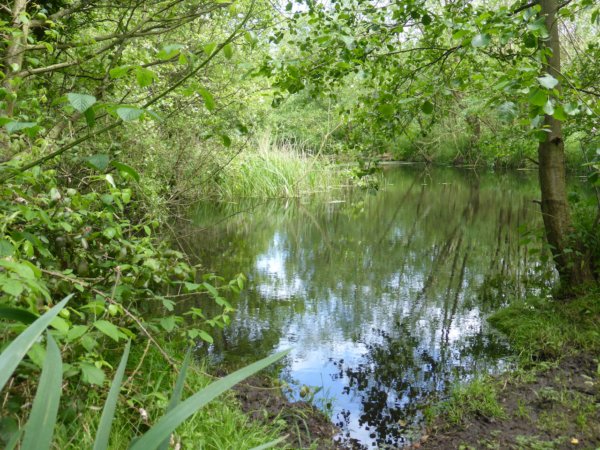 Then through more woodland, passed fields of pigs (we smell them before we see them) and alongside the grounds of Sizewell Hall before entering Sizewell village.

The railway line between Leiston and Aldeburgh opened in April 1860 and initial freight services included agricultural produce and coal. Until 1914 there was a good trade in transporting fish from Aldeburgh harbour. During the 1920’s there was a concrete factory at Thorpeness that was served by a siding on the line. In 1966 freight and passenger services ceased south of Sizewell. The old track is now a footpath and it cuts through wetlands abounding with wildlife. 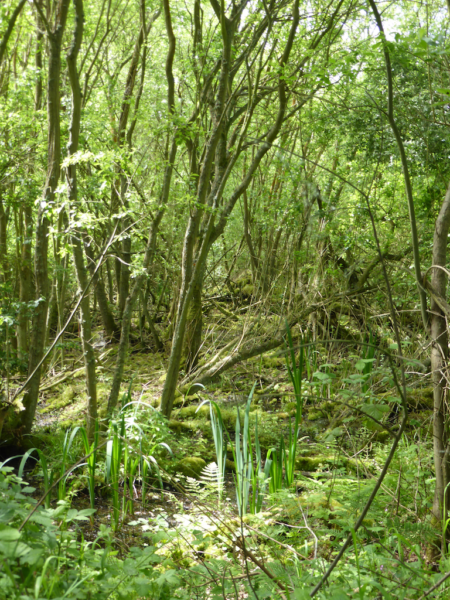 Sizewell Hall is now a Christian Conference Centre. The Ogilvie family owns the Hall they purchased it in 1859 and expanded the estate to more than 6000 acres, also extending the Hall. The Hall is situated close to Minsmere RSPB reserve and the ophthalmic surgeon Fergus Ogilvie (1861-1918) created a very large collection of British Birds in a partnership with the taxidermist Thomas Gunn, the birds were mounted in cases with simulated habitats, an unusual feature at the time.

During World War II the Ogilvie family moved out when the Army commandeered the hall. It then became a school and later in the 1960’s the headquarters for Taylor Woodrow whilst they were constructing Sizewell A nuclear power station.

I have connections to an Ogilvie family but unfortunately I am unable to establish a direct link to the Ogilvie’s of Sizewell, I would fancy a slice of this family pile.

My mother’s Auntie Elsie, a lovely lady who always had a big smile, hearty laugh and a fag on the go, married a Fred Ogilvie, he worked at Supermarine in Southampton and along with my maternal grandfather worked on the boat plane that won the Schneider trophy. Fred died a young man, in his thirties, and Auntie Elsie remained a widow for the rest of her life. Elsie was born in Simonstown, South Africa when my maternal Great Grandfather was harbour master there. Clearly there are travelling genes in both my mother and father’s families. 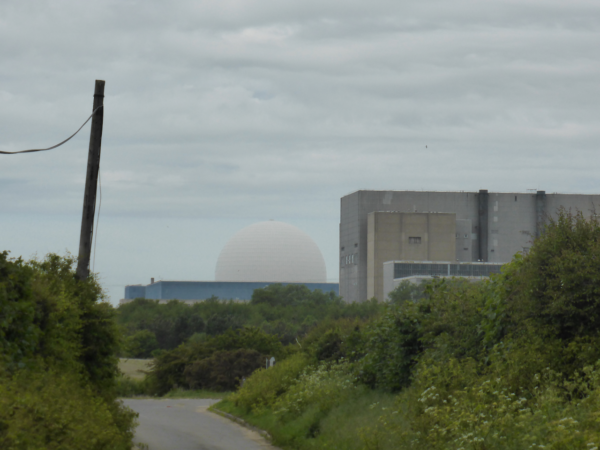 We are now outside the gates of Sizewell Nuclear power station. There are two nuclear power stations on the site with another approved. Sizewell A commissioned in 1966 and decommissioned in 2006 was the centre of a scare in 2007 when the level of the pond that holds the reactors spent nuclear fuel dropped by a foot and it was discovered that an estimated 40,000 gallons of contaminated water had escaped from a cracked pipe. The chance discovery prevented the pond from draining.

Sizewell B is the UK’s only commercial pressurised water reactor. Commissioned in 1995 and due to operate until 2035, it resembles a giant golf ball and is a striking feature on the landscape. Sizewell C is a planned site for the development of a new nuclear power station.

Walking down to Sizewell beach, with a slight glow, hopefully from the sun and the wind, we head south along the coastal path towards Thorpeness. 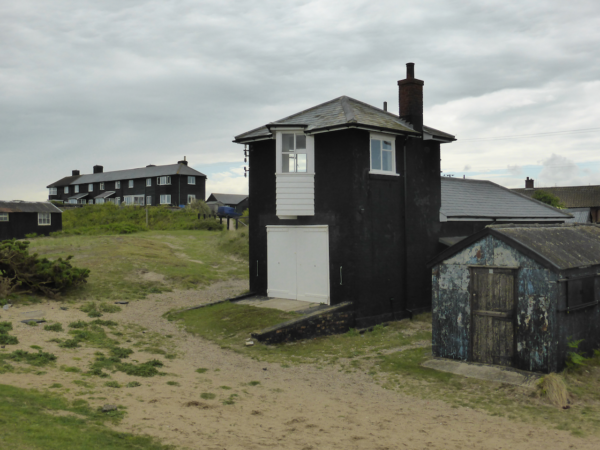 We pass the front of Sizewell Hall, (I really must recheck our family connections) and walk to Thorpeness.

Thorpeness was a small fishing hamlet until Glencairn Stuart Ogilvie purchased it, along with the rest of the coast from Aldeburgh to Sizewell, in 1910. It is said that he transformed Thorpeness into a private fantasy holiday village. He invited friends and family and established the golf course, tennis courts, swimming pool and country club.

Walking towards Thorpeness our eyes have been drawn to an interesting looking house that is sitting high in the sky. It transpires that this was originally the water tower that served Thorpeness. Ogilvie, not wanting to look at a water tower had it clad and made to look like a small house. After mains water came to the village it was transformed into a games room. It is known as the “House in the clouds”. 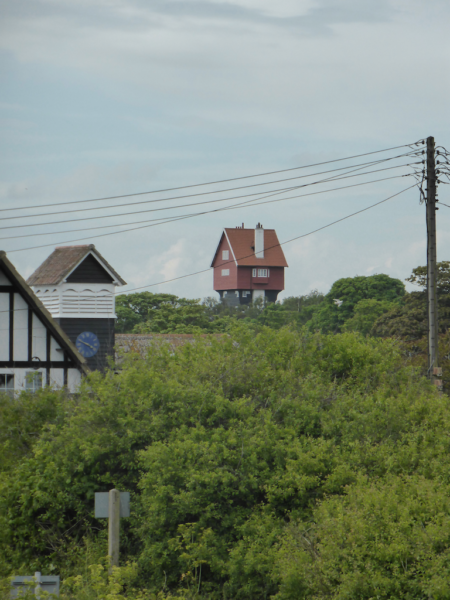 Our route through Thorpeness is on the coastal path and onwards to Aldeburgh. We overtake another couple walking, but like the 1978 fabulous, almost silent short film ‘The Waterloo Handicap’, starring Leonard Rossiter, they are not to be out done. They choose a wider path and for a while we are neck and neck, but their determination and our lack of competitive spirit means that they get away from us. 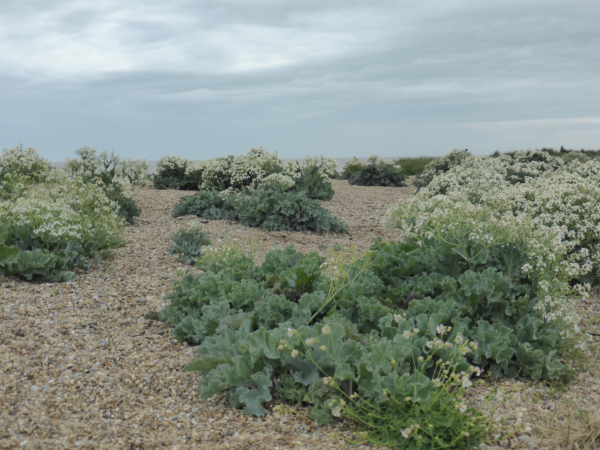 We reach the magnificent sculpture on the beach dedicated to Benjamin Britten, he lived in Aldeburgh from 1942 until his death in 1976. The sculpture, “The Scallop”, is inscribed with the words from the opera Peter Grimes “I hear the voices they will not be drowned”. There is a small child playing under the Scallop, she has turned it into an imaginary home and is providing her grandfather with a detailed description of her flat screen television and adventure playground. She then repeats the detail for us. The innocence of childhood and the affection between grandfather and granddaughter brings a smile to our faces.

Apparently there have been those opposed to the sculpture so vehemently that they have thrown paint over it. To us, casual visitors, it adds an interesting feature to this stretch of beach. 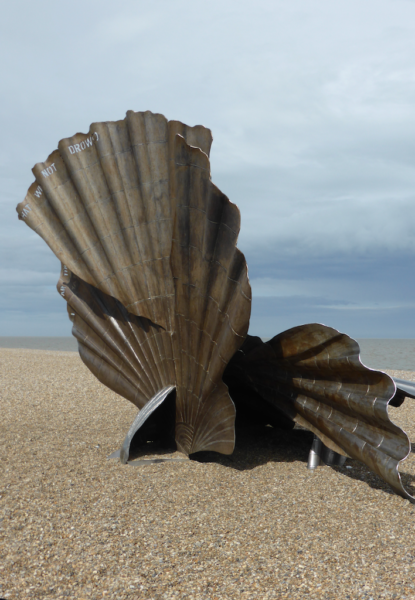 Aldeburgh is dedicated to those with money in their wallets. A glance in the estate agents window shows that this is a select area and apparently a third of the homes are second homes for those visiting occasionally. The high street is crammed with smart shops, many of which are up market high street names, incongruous in this once fishing village.

Outside of the ancient Moot Hall we come to the memorial erected by the people of Aldeburgh to Dr “Robin” Acheson who cared for the townsfolk from 1931 to 1959 and his wife Dr Nora who died in 1981. The memorial is a sculpture of their dog Snooks. There was outrage when Snooks was stolen in 2003 and the townsfolk erected a replica. In 2012 he was discovered by an antique’s dealer in Lincoln and returned, to the town’s delight. A lesson in the need to get your dog micro-chipped. 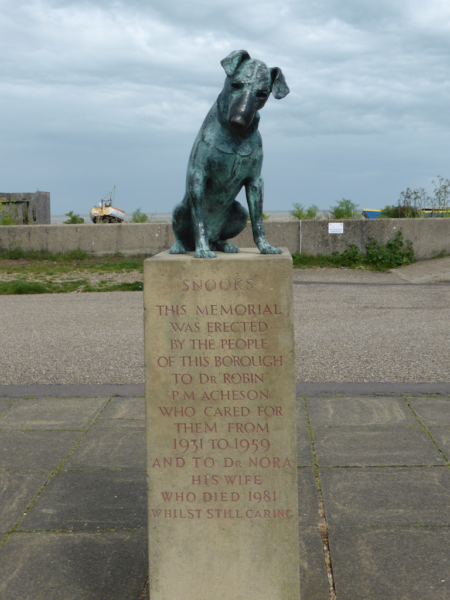 In the 16th century Aldeburgh was a major port with a ship building industry. Sir Francis Drake’s ships the Greyhound and the Pelican (later renamed the Golden Hind) were built in Aldeburgh. 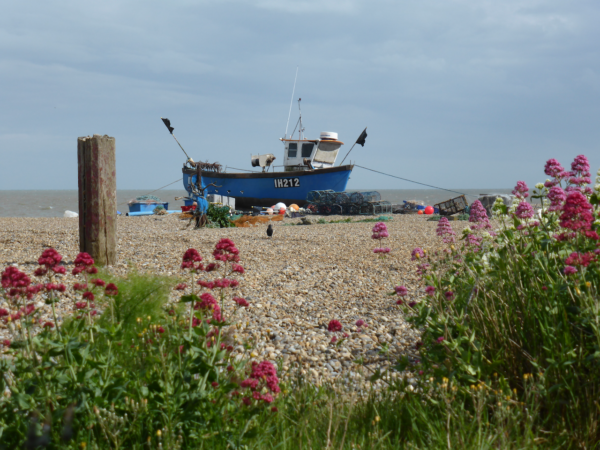 We walk through the town, there is a queue outside the fish and chip shop and it is still fifteen minutes before it opens. Later we discover this is claimed to be one of the best “Chippies” in the country. We head along the isthmus leading to Orford Ness and reach the unique quarterfoil Martello Tower. This is the north most of 103 such towers constructed between 1808 and 1812 to resist the Napoleonic invasion. It is an impressive building now maintained by the Landmark Trust as a retreat and holiday apartments. 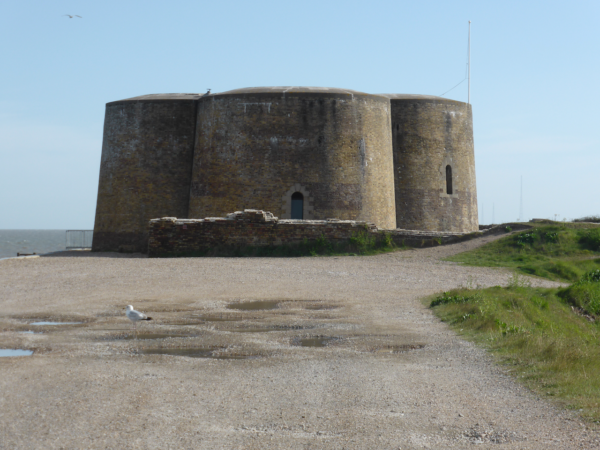 We walk by Slaughden sailing club. The fishing village of Slaughden was finally lost to a major storm in 1953, having lost a number of properties in earlier storms. Nothing remains now to show of what was once a thriving shipbuilding village.

We are walking towards Fort Mill Green a four-storey windmill built in 1824 and converted to houses in 1902. It no longer has its sails. Back through the town, the “Chippie” is doing a brisk trade, we turn left onto the main road (A1094) and pass the house where Dame Millicent Garrett Fawcett (1847-1929) the suffragist and feminist lived, she was born in Aldeburgh.

We reach a footpath on our right taking us over the golf course. We cross a couple of fairways and then get to the point where we are overlooking most of the course. The course looks fantastic, for the first time I really wish I had my clubs with me. This is a definite to revisit. 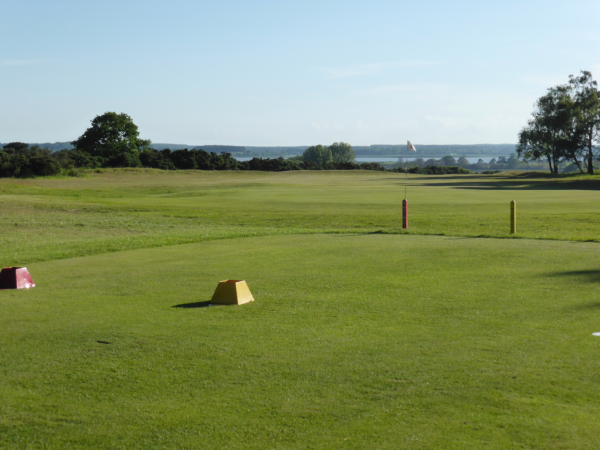 Then we cross a field of above waist height barley. Lyn is beginning to wilt so I keep up her spirits by telling her the joke about the “Fookarrwee tribe” that I first heard told by Robbie McKie in the snug bar of the Hook and Glove circa 1977. I time the punch line to perfection just as we reach the Sandlings Way and retrace our route to Briarwood Farm. It has been a good walk, almost fifteen miles, we have seen a lot of interesting things along the way and Lynnie had an ice cream in Aldeburgh! 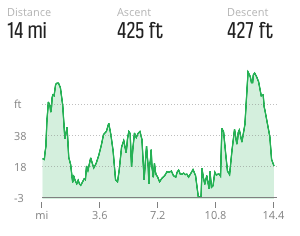