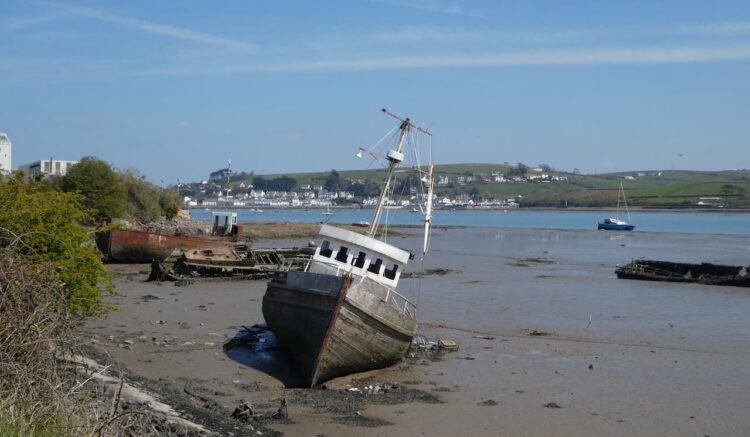 It has been a long time since we were away in the caravan .  Our last trip together was in September 2020 when we had a week away in Silton, near Mere.   After that I made a couple of trips to Minehead to walk on Exmoor.  The Covid restrictions then put pay to our plans for travel so it has been over five months since the caravan was used.

As soon as we were able to make plans we decided to resume our touring with a trip to North Devon and a stay at Seabreeze CL which is just outside Appledore.  We have used this CL a few times in the past and always received a warm welcome from the site owner Alice.  So when I called to book I was surprised to find out that she had sold the business .  However, there was no need to worry because the new owners, Jason and Maria were equally welcoming and very enthusiastic about their new venture.

After arriving yesterday we went for a stroll on Northam Burrows which is right next door to the site.  It’s open access land so it is easy to find a quiet route for a good stroll and Crosby was up early for three miles on the Burrows this morning.

Our main walk of the day is going to be a trip into Bideford following sections of the South West Coastal Path.  We leave Seabreeze CL and turn right for a few yards along Long Lane before turning left into Primrose Lane which we follow uphill to reach a crossroads with the A386 where we cross and join Wooda Road.  We stay with this road for a few hundred yards to reach a footpath on the right.  This is the South West Coastal Path and we will follow it into Bideford.  We head through fields to reach a minor road which we cross and then continue on the path as it turns towards the River Torridge.

On reaching the River we turn right along the bank.  There are a number of abandoned vessels, it is not clear how they came to be here.  Whilst being picturesque it is odd that a ship can be left tied up to rot in the water.

This is a cracking spot to walk.  After months of walking from home it feels so good to be away and have some different views so we do not rush and frequently stop to just look around.

We stay with the coast path as it goes through woodland on top of a cliff besides the river.  I am not keen on heights but feel comfortable walking along here.

The path leads around coves and then drops down to the attractive Cleave Quay.

From here we go under the Torridge Road Bridge and head through houses to reach the Council Offices.  The path now runs alongside a car park at the side of Victoria Park and this leads us into Bideford.  We have decided to have a mooch around the town whilst avoiding busy areas.  We continue along the side of the river to reach Rowan Fawdon’s sculpture of Tarka the Otter.

The plaque by the statue quotes a section from Henry Williamson’s book “Tarka passed under the ancient Long Bridge which the monks built across their ford …”.   The statue is right beside the medieval Old Bideford Bridge, or Long Bridge, it has 24 arches spanning 677 feet across the River Torridge; it is thought to be one of the longest remaining medieval bridges.  The bridge was widened in 1865 and 1925, but was struck by disaster on 19th January 1968 when a combination of heavy rain and high tide led to a couple of bridge arches collapsing.

There is much to admire about Bideford, there are many old buildings including the attractive Panier Market.  Unlike nearby Appledore the town has yet to become popular with second home owners and holiday lets so some properties have a slightly neglected feel.  Architecturally there are some cracking buildings so we wander through the streets but Lynnie becomes more interested in securing a Hocking’s Ice Cream. We head back to the entrance to Victoria Park where a van is sited.

We now wander through Victoria Park to the north west corner where we join Park Lane and turn right to reach Chanters Road where we turn left.  At the A386 we turn right and follow this as it heads uphill to the A39.  Here we cross and continue on the A386 toward Northam.  When the A386 forks right we keep on along the B3236 for a short distance and then turn right into Fore Street to head to the centre of Northam where we take a detour to look at St Margaret’s Church.

The last time we were here was for the sad occasion of the funeral of Lynnie’s Uncle Derrick.  I am not a man of faith but was stuck by the warm and sympathetic manner from the vicar who led the service.  Whilst Lynnie looks for the memorial stones to her relatives in the graveyard I wander around to locate the Ordnance Survey Flush Bracket which is on the church.

Across the road from the church is an interesting flag pole on Bone Hill, it was first erected in 1897 and then rebuilt after it was damaged by a storm in the 1980’s.  Since we were last here names of ship captains have been painted on some of the stones.

We now turn right and walk along Tower Street and then turn left into Diddywell Road which we follow through Northam to reach Diddywell where we turn left into Primrose Lane and then head back to the caravan park.

To follow this walk you will need Ordnance Survey Explorer Map 139 – Bideford, Ilfracombe and Barnstaple.

You can view this 7.5  mile walk on OS Maps and download the GPX File Here (Subscription to OS Maps Required)