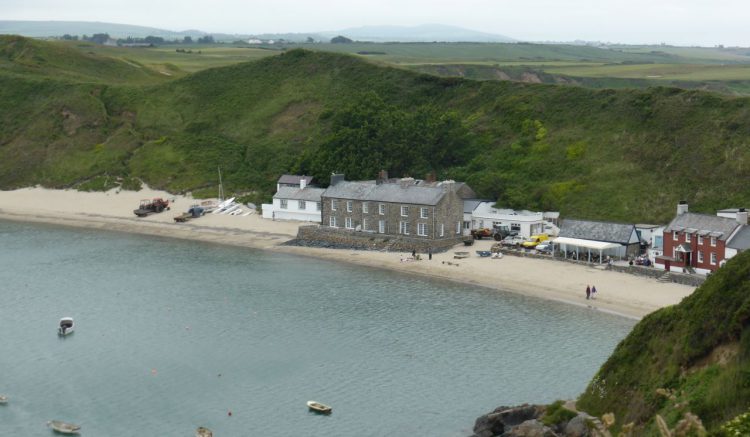 I am now a regular at Povey’s Butchers in Chwilog and during our morning chats I report our experiences from the previous day and get advice on where else I should visit. This shop could double for a tourist information centre, during one discussion a map is produced from under the counter and I am shown the route to Porth Dinllaen home of the Ty Coch Inn and told that this is a must visit place.

After walking the dogs and doing some work it is time to head off and we have a pleasant drive across to Morfa Nefyn where we park up and then head up the road towards the Nefyn and District Golf Club.

The walk up the lane is pretty bland, but on reaching the Club House the outlook is impressive. This is a course that makes me wish I had my clubs with me. The golf club was founded in 1907 originally as a nine hole course and then extended to 18 holes in 1912, with a further nine holes added in 1933. 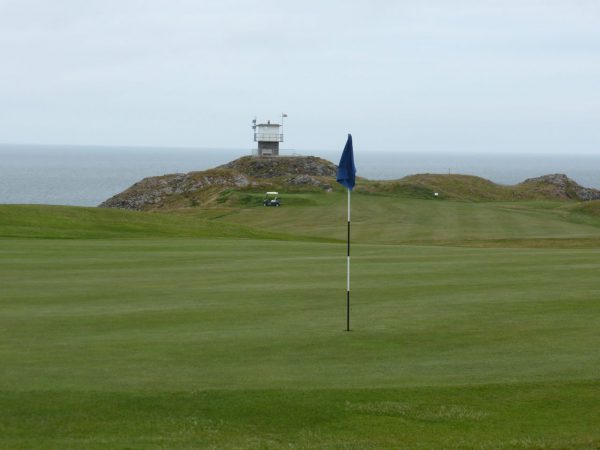 We follow the footpath across the course to the peninsula housing the lifeboat station and I start to wonder if I would really enjoy playing this course. Looking at the configuration of holes it looks like my left to right fade would place me precariously close to the craggy cliff edge. I can envisage being able to see my ball but declaring it unplayable because it is too close to the edge!

Along with the cliffs there is challenging thick rough and even on a summers day a steady breeze. When the wind blows here it must be difficult to stand up, let alone hit a golf ball. In December 2013 winds of 100mph combined with exceedingly high tides had a devastating effect on many of the holes on ‘The Point’. It resulted in their closure for 18 months, so they have only just re-opened. 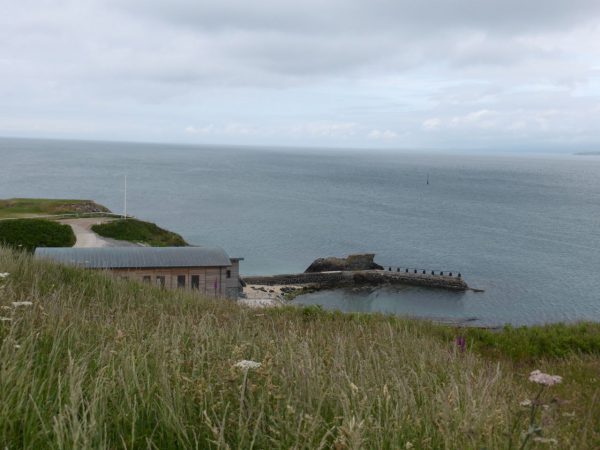 Heading around the top of the cliff we catch sight of the newly completed Lifeboat Station, there has been a lifeboat here since 1864. The Lifeboat Station’s website reports that a severe northerly gale on December 2nd and 3rd 1863, caused about 18 ships, that had been sheltering in Porth Dinllaen Bay, to be driven ashore and wrecked. Robert Rees, of Morfa Nefyn, tied a rope around his waist and, with the help of 4 other men, succeeded in saving a total of 28 lives from the various vessels. There was a call from the community for a lifeboat, in those days people reacted quickly and a lifeboat station was opened on 26th August 1864. 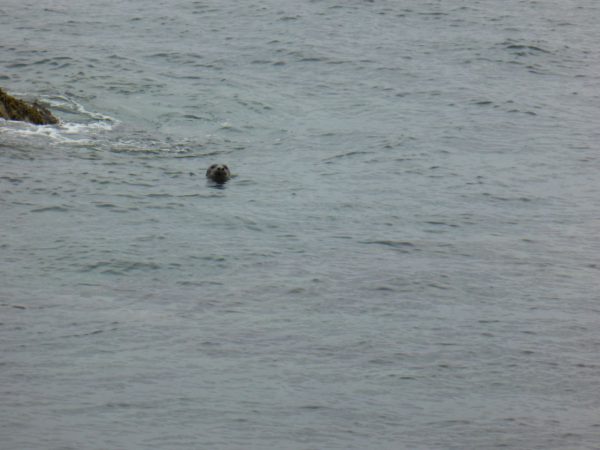 As we stand and look out over the rocky outcrops Lynnie spots grey seals in the water. 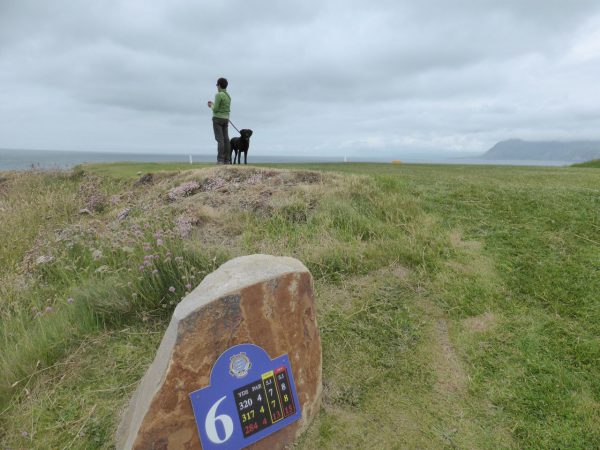 So we take time to sit and observe these fascinating creatures and I ponder over the challenges of teeing off on top of a cliff. Probably with my eyes closed, which might improve my game!

After a while we head back along the cliff and follow the lane down to the village of Porth Dinllaen, this small settlement is the home of the Ty Coch Inn – which translates in English to Red House. It was voted the third best beach pub in the world, coming behind bars in Jamaica and Germany. 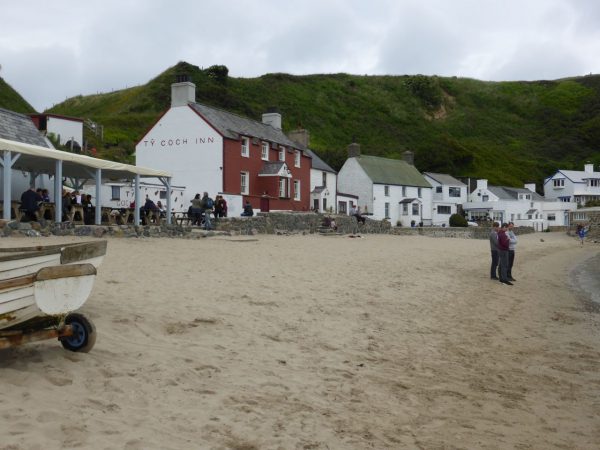 According to the pub’s website the Ty Coch was built in 1823 from red brick imported through the port of Porth Dinllaen from Holland. It is thought the brick was used as ballast for a ship taking granite in the opposite direction. For the early years of its life it was a vicarage but when the vicar moved out in 1842 his housekeeper, Catherine Ellis, opened the building as an Inn supplying refreshment to the shipbuilding workforce who worked on the beach.

We contemplate having a pint, but it is too early in the day for us. Instead we retrace our steps to Morfa Nefyn, where we comb the beach looking for treasure to add to Lynnie’s collection of seashells. 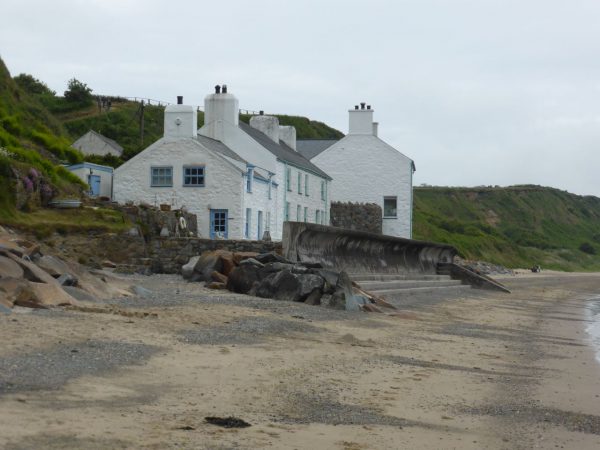 The row of cottages here enjoy stunning views, but it must be a daunting, if exhilarating, place to reside during a ferocious storm.

At Povey’s Butchers I was told that there were originally plans to turn Porth Dinllaen into a main crossing point to Ireland, before deciding that Holyhead was a more suitable site. I am sure the crossing would have done wonders for local employment, but it would have destroyed the tranquility of this stunning location. 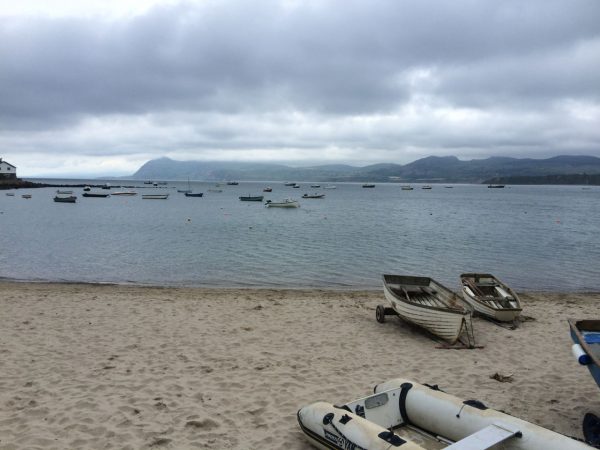 We have spent a few interesting hours ambling about, but have not covered a huge distance. On returning to the Unicorn the boys give me that look, “Time we were off to the beach Dad”, who am I to refuse them? In a few days time we will be moving on and they will have lost the chance to romp on the sands.