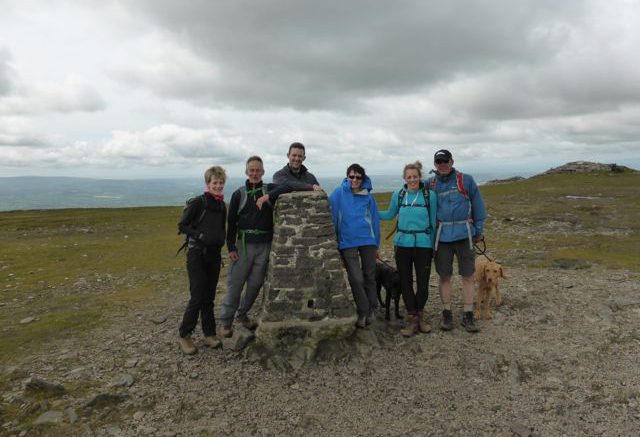 There is one walk in the Dales that I have tried to do every year for as many years as I can remember and that is the trip up Ingleborough. There was one year when I was working in the north that I made a detour on the journey between Middlesbrough and Liverpool just to walk up it.

Todays trip up is special because we are joined by Lolly and Toby along with Julia and my old mucker Maff. Lolly has been up before (the first time when she was about four) but not in recent years, whereas the other three have never tackled this magnificent walk. My favourite route is from Clapham and that is where we start today, parking in the Yorkshire Dales National Park car park. I have previously written about his walk but it is worth repeating.

Leaving the village the route enters the Ingleborough Estate Nature Trail, there is a machine to buy a ticket for the route through the estate. Years ago when we first did this walk you started alongside the sawmill and dropped your money into an honesty box.

The path quickly rises and then is level as it passes the man-made lake on the Estate. This was created in the 19th century to provide drinking water to the village and drive the water turbine installed to provide electricity for some grand properties, the church and street lighting.

Lynnie and I usually walk as a pair and it is unusual for us to be in a group, but it is already noticeable how pairings and conversations change and develop as we stroll along.

We soon reach The Folly, at this point you are high above Clapham Beck, but after going through a gate the path soon follows alongside the beck to Ingleborough Cave. This show cave is open to the public and apparently allows access to a 500 metre passage.

Alongside the cave, water emerges from the rock face. It has come off Ingleborough, down Fell Beck and then fallen into Gaping Gill. The waterfall from Fell Beck to the bottom of Gaping Gill is the tallest unbroken waterfall in England with the water falling 322 feet, however to see it properly you have to descend into the pothole. There is still some serious walking to do before we get to Gaping Gill.

The second thing I notice about being in a group is the varying pace, I normally walk at a fairly consistent pace, leaving Lynnie behind when we encounter a hill or a descent only to be caught up when we get on the flat.

First is the climb through the dry gorge of Trow Gill, this is a cracking spot. Arriving at the top there is a steady ascent through the rock strewn path. After going through the wall gates I am told that it is time for a breather and refreshments. 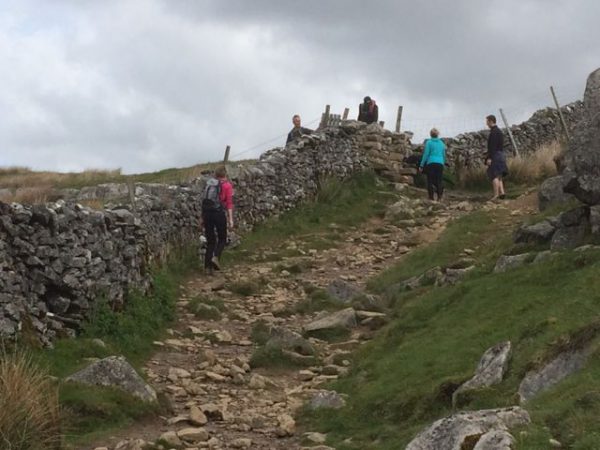 Suitably rested we are now heading towards Gaping Gill, I usually detour away to start the ascent of Ingleborough, but today we walk to this huge pothole so the rest of the party can have a look. We have just missed the week when scaffolding is set up to lower folk down into the pothole, (not a journey that I would have taken in any case). There is much activity around the vicinity of the pothole as trailers are loaded with scaffolding, tents and equipment to be ferried back to Clapham. 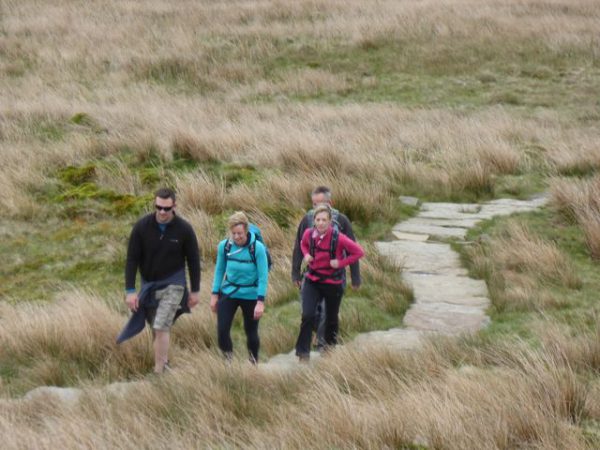 Whilst the others look at Gaping Gill Lynnie and I start to follow the path up to Little Ingleborough. This is a long steep climb, and Lynnie’s least favourite part of this walk. 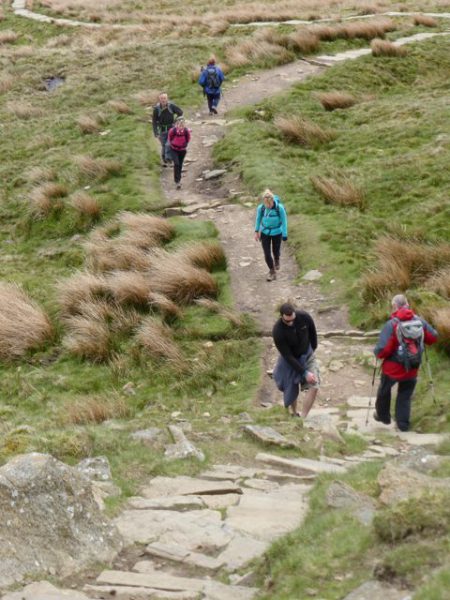 On reaching the top of this climb it is time for another breather and a chance to admire the view back over the valley to Pen-y-ghent.

From the peak of Little Ingleborough the well-defined route follows the ridge before the final ascent to the top of Ingleborough itself. This is always a very special place for reasons that blog followers will know. 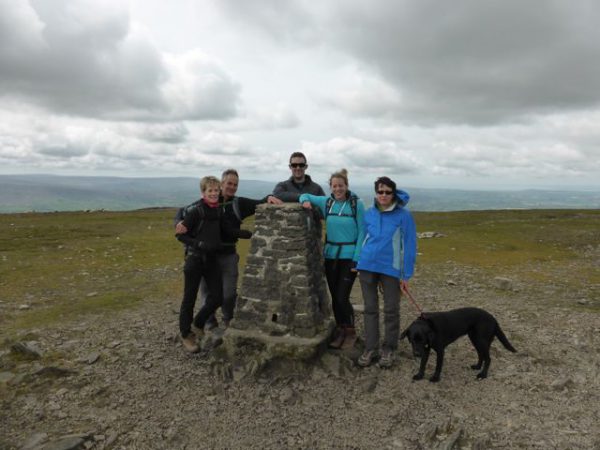 It is even more special to be here today and with such good friends, I make sure to wave to those special friends who are not with us. We stop for a group photo at the trig point then wander over to look out over Ingleton, before heading back across the summit to view Whernside and the Ribblehead Viaduct.

We clamber down the rock descent and then take the Three Peaks path towards Horton. We soon stop out of the breeze to enjoy our picnic and have a strange encounter with a sheep who is clearly miffed that we have taken up residence in her spot and despite Dexter and Crosby’s presence feels entitled to challenge us.

Lunch consumed we continue on our way, this is along steady descent with cracking views of Pen-y-ghent in front and extensive views of limestone pavement. 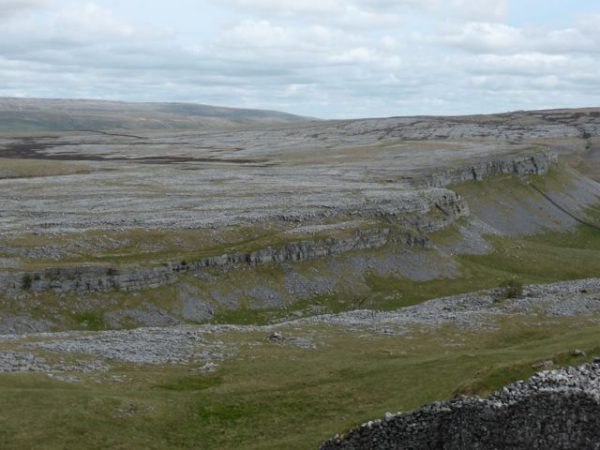 Our route takes us through a short but spectacular section of limestone pavement. At a cross roads of paths we turn right towards Clapham. After going through Sulber Gate we walk alongside the stunning Crummack Dale. This is limestone walking at its best and we all stop to admire the views. 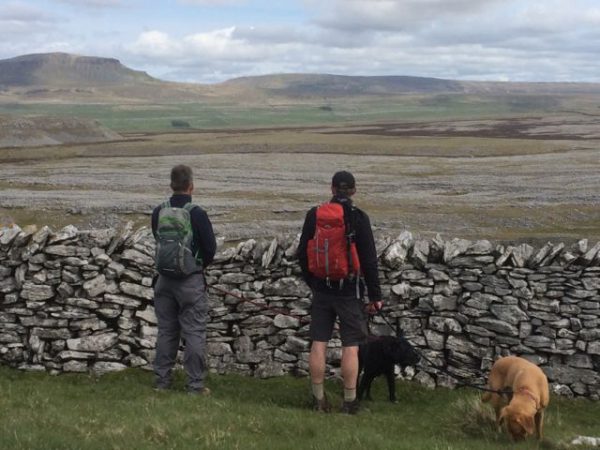 The path is easily followed (but a map is always recommended because there are a number of paths that lead off the main route) and heads towards Thwaite Scars, eventually reaching the end of Long Lane. As a child Lolly had a real dislike for the Long Lane route and it seems unfair to take her along it today so we detour to head back down to Ingleborough Cave and follow the nature trail back to the village.

It has been a cracking walk, I have been up Ingleborough many times but this has been one of my best outings. We topped off the trip with a refreshing pint at the recently refurbished New Inn. If we did not have Maurice’s 90th birthday party to go to we might have been tempted to stay a bit longer, but we need to be in fine fettle for an evening of celebrations. 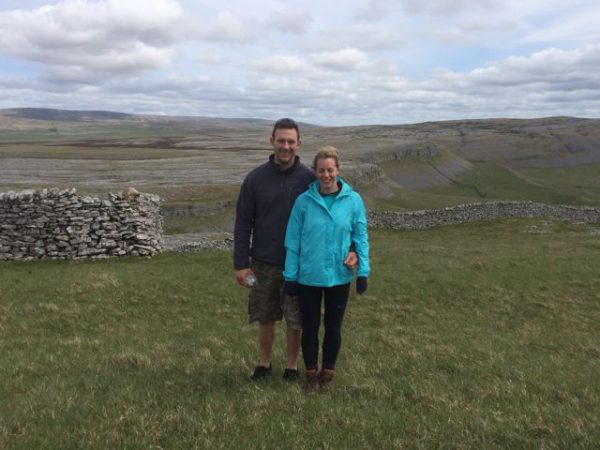