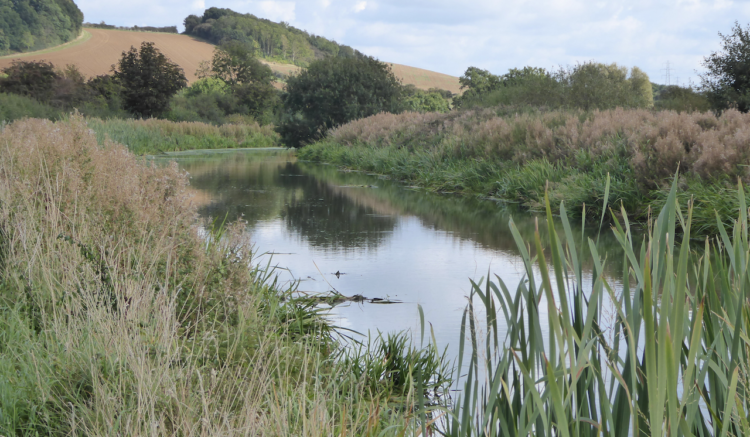 Whilst walking we have come across a number of terms to describe an outing. In Norfolk a chap told us it was a cracking afternoon for “jamming about”; then in Durham another old boy told us it was a stunning day for a “gallop”. So today, although it is not a stunning day we are off for a gallop, although a gentle trot might be a more accurate way of describing our pace.

We leave Casthorpe House Farm CL by turning right up the lane and at the T-junction we turn left and follow the road until we reach the footpath that leads to the canal just before Casthorpe Bridge. At the canal towpath we turn left towards Grantham. This is another section of the canal that has water, but it is thick with green algae.

After just over a mile and a half we reach the disused wharf at Harlaxton. This wharf was used to transport goods to and from the nearby village. The information board explains that the canal was mainly used to transport cargoes into Grantham from Nottingham. This was mainly coal, lime and building materials and night soil for use as fertilizer on the fields. You might think this is shite but I am repeating what it says (the old ones are the best!)  It was mainly agricultural goods being transported in the opposite direction from Grantham. It took two days to get from Grantham to Nottingham and there were stables near the wharf for resting the horses.

When the canal closed to navigation in 1929 the wharf fell into disrepair and was used as an area to dump rubbish, unfortunately, some mindless idiots still think it’s okay to leave litter here. In July 2000 it was opened as a public space. 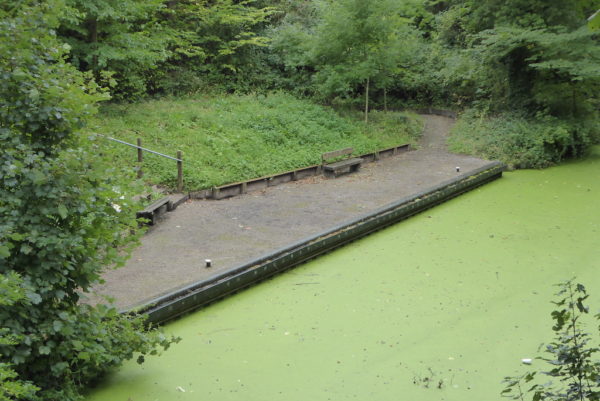 The wharf is located in the middle of an area known as the Harlaxton Drift; this is a cutting almost one and a half miles long and twenty feet deep, a significant piece of engineering and a wonderful bit of industrial heritage. It is refreshing to see that the Grantham Canal Society is doing so much to try to restore this waterway. 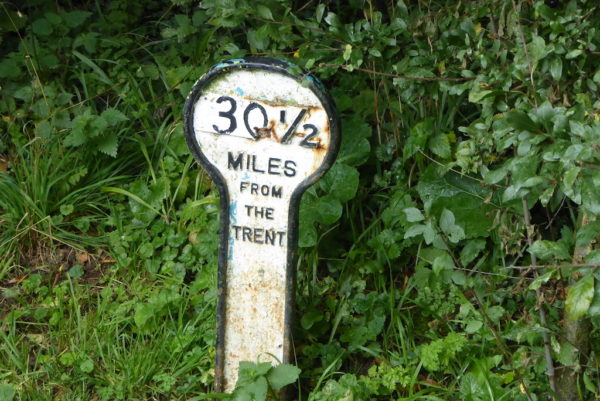 Continuing along the towpath we head towards Grantham and after about a mile reach the embankment of the busy A1, thankfully the footpath turns right here and leads down to a road with a pavement leading under the A1.  Turning left at the next junction we walk up a road for a few hundred yards and then turn right to pick up the canal as it wends its way into town. It leads through a housing estate and when the path ends we turn right to walk through an industrial area to reach the A607, where we turn left and walk into Grantham.

The most striking thing as we walk into town is the amount of litter. Everywhere we look there are bottles, cans and food packaging on the pavement and in the gutter. We initially assume it is a problem on this stretch of road, but entering the town itself we discover the whole area is used as a rubbish dump. Surely the local authority should be doing something about this!

Being late on a Sunday afternoon Grantham is closed, we have no desire to go into the shops we want to look at the architecture and find out a bit about the town’s history. Most people of our generation associate Grantham as the birthplace of the Country’s first female Prime Minister; I am hoping to avoid anything with too much reference to her.

After looking at a couple of cracking buildings we arrive at the medieval Market Cross. Apparently the top of this cross is believed to date from the 18th century. Although the first cross would have been erected hundreds of years earlier.

From here we wander up the road towards the Angel and Royal. This is said to be one of this Countries oldest hotels, apparently the Knights Templar originally built it in 1203 as a hostel. Later it became a coaching inn and was known as the Angel. Over the years it was frequented by many Royal’s including Richard III who held court here in 1483. Reputedly he sent a letter from here seeking the death of his cousin Henry Stafford, 2nd Duke of Buckingham, for instigating the Buckingham rebellion. 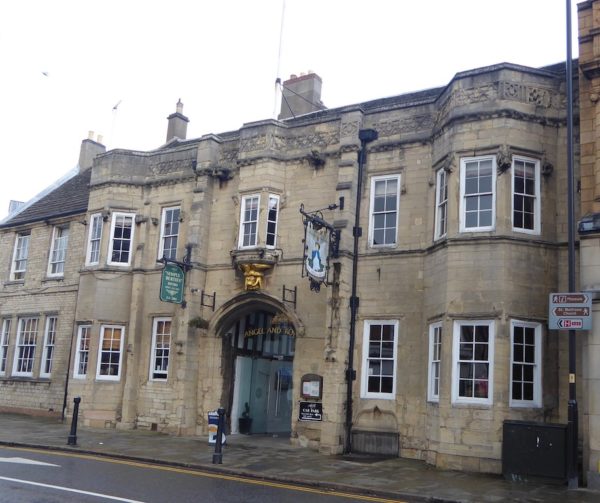 The Angel at the front door is said to be holding the crown of Richard III. However it only gained the Royal part to its name in 1866 when it was visited by the then Prince of Wales, later to become King Edward VII.

Wandering into town we arrive at the statue of Sir Isaac Newton. He was born in 1642 at nearby Woolsthorpe-by-Colsterworth and was educated at King’s School in Grantham.  After attending Cambridge University he developed his theories of calculus, optics and gravity. From reading various books over the years I was aware of some of Newton’s roles, however, I had not previously known that he was Master of the Royal Mint for the last thirty years of his life. He died in 1727 aged eighty-four and was buried at Westminster Abbey. 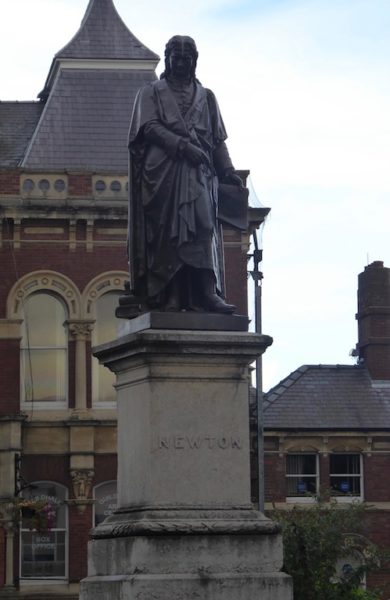 Further along the road is another statue, this one to Frederick Tollemache (1804-1888) who served as the Member of Parliament for Grantham in the 1800’s. The inscription on the monument reads “He represented the Borough in Parliament with occasional intervals from 1826 to 1874. Erected in 1891 by friends who revered his memory respective of political opinion.” There are not many MPs that you could say that about today!

Walking back towards the Town Hall I notice a blue plaque in a side street. This is to PC Edith Smith (1880-1924), she served in the then newly formed Women’s Police Service from 1915 to 1918 and is notable for being the first woman to be given full powers of arrest. It is perhaps fitting that just over 100 years later the most senior role in the Police Service, Commissioner of the Metropolitan Police is held by Cressida Dick, the first women to achieve that rank.

There are numerous historic buildings in the town; just around the corner we pass the National Church of England Primary School. The nearby local information board explains that the National Society was set up in 1811 aiming to establish a school in every parish of England and Wales, there was a previous school in the town but this one has been used since 1859. 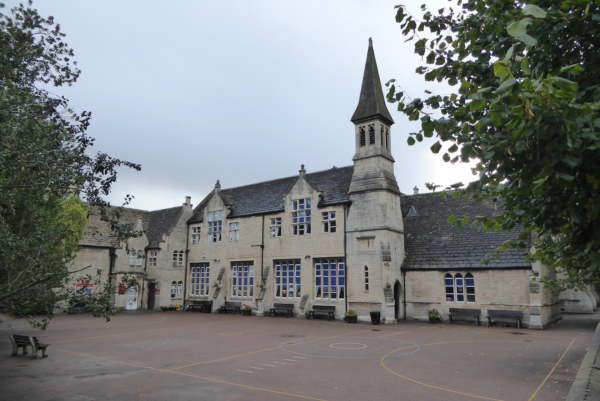 It is still possible to see where the railings from the school wall were removed as part of the War effort. 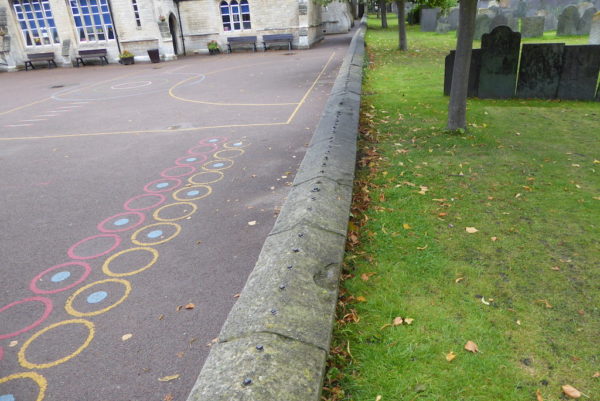 Next to the school is the Church of St Wulfram’s, this is a fine building said to have been modelled on Salisbury Cathedral (I thought it looked familiar!) and it has the sixth highest spire in the country. 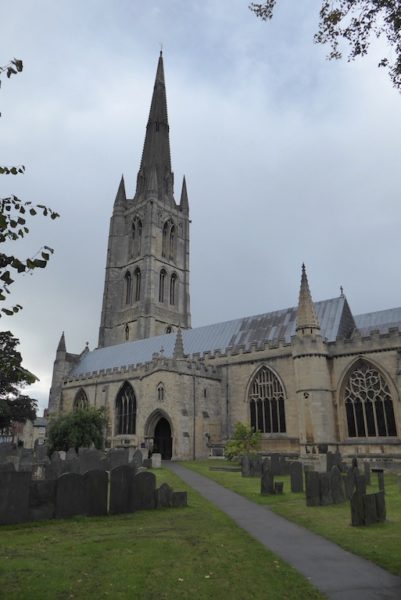 Around the corner is the Blue Pig, this is one of Grantham’s Blue pubs which reportedly date from a political rivalry in the 1800’s between the Manners family (the Duke of Rutland at Belvoir Castle) and the Brownlow family of Belton House. The Manners family were Whigs (a political party that later merged with others to form the Liberal Party) and chose blue for the colour of their pubs where supporters would meet and imbibe.

It is time to head back to the Coachman, we still have a few miles to go so head along Westgate and then turn right up Dysart Road to head out of town towards Barrowby. Our wander around Grantham has been fascinating, but spoilt by the amount of litter everywhere. We have never seen the like of it. Then as we get within a hundred yards of Barrowby the litter stops. Under the village sign it proclaims it was the best-kept village of 2016. It does not say if this is within the county or Country, but clearly someone here is picking up the litter. 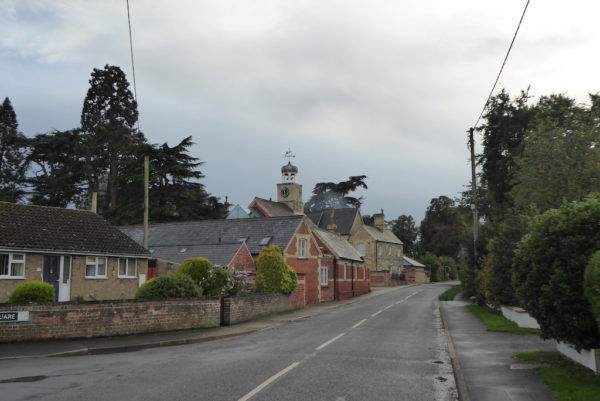 We follow Low Road through the village and then at the village green turn left along Casthorpe Lane to walk the remaining mile or so back to Casthorpe House Farm CL. Along the way collecting discarded cans and plastic bottles, which we deposit in the recycling bin back at the site.