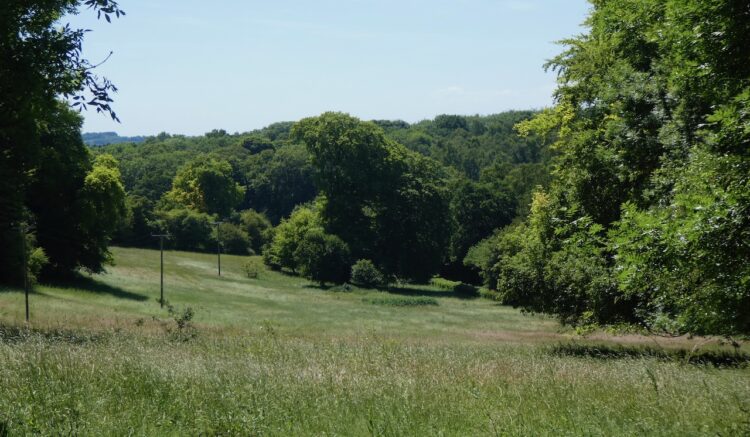 One of the challenges walking during the current lockdown is finding sufficient variation in my walks.  Most years we would have already been away in the caravan a few times by now, but this year I am frequently walking the same routes.  So today I am heading out to do a bit of jamming about to find some footpaths I have not walked for a long time.

I start from the Silver Plough in Pitton by turning left out of the car park and left again along The Green, the lane running alongside the Silver Plough pub.  I take the second footpath on the right to head uphill and leave Pitton.  After going through a kissing gate at the top of the hill I continue past paddocks and through two more gates to follow the footpath into Church Copse.

I follow the track as it bends to the right (the route of the footpath is across an arable field) but rather than damage crops I stay with the track passing a plantation on the right.  On reaching the edge of Bentley Wood I enter the trees and immediately turn left and follow the footpath along the edge of the woodland. On reaching a well-used path on the right I turn into the woods to walk along the side of Three Sisters Copse.

The path gradually descends to reach, West Dean Road, a minor road by a house.  I go through a gate and turn right for a few yards on the road before taking a footpath on the left which heads through woodland.

Leaving the woods I cross a field to reach a stile and then continue into the grounds of Norman Court.  Up until recently Norman Court was a public prep school and is now the base for a Community Interest Company running education and other events.  Apparently, the location derives its name from Roger Norman who owned the estate in the 14th century.  The old manor house was demolished around 1752 with a new one built and then extended over the years.

In 1906 Washington Singer (1866 – 1934), of Singer sewing machines fame, purchased the estate and it passed to his son Grant Singer who was killed in action during World War II at the second battle of El Alamein in 1942.  His widow sold the estate in 1952, it then became a school.

The footpath signs lead through the grounds to the entrance driveway, which I follow until the path leads along a driveway to Norman Court Stud, there is a gate across the driveway but access to the path is to the right of the gate.  Following the path I pass Norman Court Stud.

I continue along the driveway to head into West Tytherley and on reaching a road, North Lane, I turn right and walk through the village passing the community shop and the Black Horse pub.  Just after passing the village school I turn left into Church Lane and on reaching the churchyard enter to seek out a bench to stop for lunch.

When I am away with Lynnie we often pop into churches to admire the architecture and wander around graveyards.  Since lockdown I have started seeking out Ordnance Survey Benchmarks on my walks.  It adds a bit of variation and takes me to some interesting old buildings.

The ordnance survey used benchmarks to record height when surveying.  A survey would start from a fundamental benchmark, where the exact height above seas level was known and then continued on a route, as they went along creating benchmarks and recording the variation in height through a process of spirit levelling.

Approximately 500,000 benchmarks still remain.  The exact number is not known as they are frequently lost in house redevelopment, road widening or bridge repairs.  Whatever the number there is no doubt I will not even find a third of them!

After locating the benchmark on St Peter’s Church I decide to wander around the churchyard.  There are two graves that catch my eye.  The first is the grave of Washington Singer.

The other is the grave of Sir Albert Victor Francis Seymour 2nd Baronet.  He was the son of Sir Francis Seymour who amongst other things was the Groom-in Waiting to Price Albert when he married Queen Victoria.  This is a term I have not previously heard.  Apparently, the role continued after the marriage and the death of Prince Albert in 1861.  In 1876 Victoria made him an Extra Groom-in-Waiting, I am not sure if this was a promotion or a demotion.

After Francis Seymour’s first wife died in 1867 he re-married and at the age of 76 he had a son Albert who later became the Page in Waiting to Queen Victoria, which apparently is a ceremonial office and requires attendance at State Occasions like the opening of the Houses of Parliament.  Apparently these are handed out to members of the landed gentry and relatives of officers of the Royal household and are seen as prestigious positions. Increasingly I find myself taking the Oliver Cromwell view on such things.

I turn left into Dean Road and after a couple of hundred yards take a footpath on the right leading into woodland.

On reaching another road, Scouts Lane, I cross and take the track into Bentley Wood and stay on this track passes a car park in the woods.  At the next track on the right which is blocked to vehicles I leave the main track and gradually ascend through the woods.

There is a network of paths and tracks in these woods but I stick with the main track as it sweeps to the left through Redridge Copse to reach a forestry track where I turn right.  After quarter of a mile I reach a crossing of forestry tracks.  Here I turn left and walk through Coalpits Copse.

I stay on this path as it crosses another footpath and then after going through a gap in the trees return to the junction of six paths where I head north on the main forestry track until I reach a way-marker towards Pitton.  From here I retrace my steps up through Church Copse then along the footpath as it runs besides fields.  After passing through a kissing gate I cross a track and go through another gate to walk besides paddocks to reach another kissing gate where I descend down the steps to follow the path back into Pitton.  On reaching the single track lane, The Green, I turn left and return to my starting point at the Silver Plough.

My walk has covered 11 miles with about a third of it on paths I have not previously walked.  Time to study the maps to see if I can discover some other new routes.