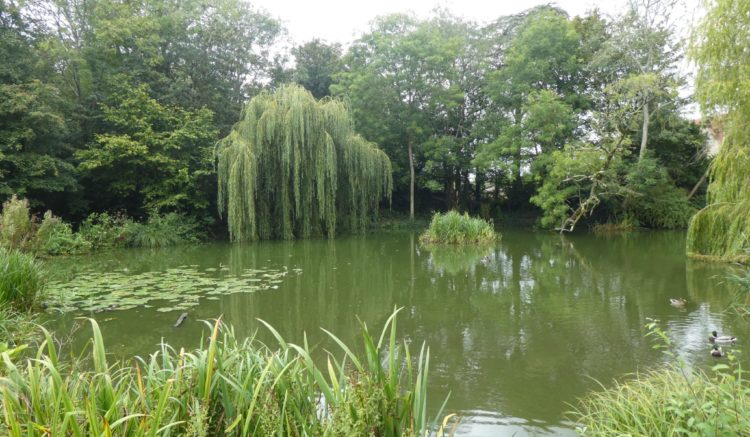 Today’s walk is on an area of the South Downs that I have not previously walked.  The starting point is the National Trust car park in Slindon Woods besides Park Lane, just south of Slindon (Grid Ref: SU960077).

On reaching the road I turn left and wander through the village on School Hill soon passing an old railway carriage, apparently dating from 1905, which has been converted into a thatched summerhouse.

School Hill becomes Church Hill and passes the 12th century St Mary’s Church.  Apparently inside this church there is a wooden memorial to Stephen Langton who was the Archbishop of Canterbury and witnessed the signing of the Magna Carta in 1215.  One of the Archbishop’s residences was located in the village and is now the home of Slindon College.

At a junction I turn left into Topp Road and pass the Catholic Church of St Richard built in 1865.

My route now passes the entrance to Slindon College and then as the road sweeps to the left I take a footpath directly in front heading north through a copse to descend to a minor road.

Here I turn right and within a few hundred yards take a path on the right which follows a track uphill.  I stay on this track until I reach a footpath on the right, just before Row’s Barn.  Here I turn and head uphill towards the Folly.

Slindon Folly, also known as Nore Folly was built in 1814 as a location for Countess Newburgh’s picnic parties.  Now owned by the National Trust it was restored in 1993.  It is a fine flint construction with good views.

Located just in front of the folly is an Ordnance Survey Trig Pillar, this is the 177th I have bagged.

From the Folly I continue on the footpath as it follows a track through Nore Wood.

Another footpath joins from the left and then the path heads steadily downhill to reach a junction of paths where I turn right and head east.  After leaving the trees I continue along by the edge of fields to a crossing of paths.  Here I continue straight on through woodland.  At a junction of paths I turn right along a track and then within a few hundred yards take a path on the left which heads east through a field towards Dale Park House.

The path heads through a valley to then climb up to Woodland surrounding Dale Park House.  My route continues through the woods to pass the remains of what looks to be World War II barracks.

Reaching a driveway I turn right and follow the route steadily downhill, as I emerge from trees I get a good view across the valley towards New Barn Farm.

At a junction of paths I stay on the main track to head uphill to a minor road and follow this uphill into Madehurst.  Here I take a slight diversion to visit the church of St Mary Magdalene; originally built in the 12 century this flint church has been extended over the years and underwent major refurbishment in 1863-64.

After popping into the church to look around I resume my walk by leaving the churchyard and turning right along the lane, as the road sweeps to the left I take a footpath on the right initially along a lane besides houses before crossing fields heading towards Fairmile Bottom and the A29.

At a junction of paths shortly before reaching the road I continue straight on and emerge at a lay-by besides the busy main road.  Crossing with care I take a footpath opposite, which enters trees and quickly starts to head steeply uphill.

I stay with the footpath as it heads through woodland to join a track.  I leave this main track at a footpath on the right and head downhill to enter woodland.  In the trees the path soon climbs again, at a fork in the path I keep right and go through a gate to reach a junction of footpaths where I turn right.

The footpath now runs along the edge of Screens Wood with fields to my left.  After just one quarter of a mile the path goes left leaving the woods to cross fields.  As I enter the second field I spot the trig pillar on Park Farm. I make a slight diversion to follow the track up the side of the field to get a better view of the trig.  This is the 178th I have bagged.

Back on the footpath it follows a track and on reaching Long Lane I turn left and follow this track down to the A27.

From looking at the map I had thought I could pick up a footpath the right, but realise that this would involve walking by the side this very busy road for a while.  Instead I turn around and walk back up Long Lane.  On reaching the junction of tracks I turn left and head towards Rewell Wood.

At a junction of footpaths in the woods I turn left and follow the path to a crossing of paths near some old earthworks.  Apparently medieval pottery has been found in the area and it is protected under the Ancient Monuments Act 1979.

I turn right then quickly left following the path downhill to reach the B2132, which I cross and continue along a footpath that takes the route of a driveway to properties.  At a junction with a minor road I turn right and soon reach the A29, which I cross with, care and follow the road into Slindon.

I wander through the village, at the junction of Reynolds Lane and Park Lane there is a memorial commemorating the villages association with cricket.

It is claimed that Slindon has the oldest cricket club in continuous existence, having been formed in the 1700’s.   The villages website provides an interesting account of how cricket developed here and why this, rather than Hambledon, should be recognised as the place where cricket as we know it today began.

I continue through the village to reach School Hill, turning left at the village pond to retrace my steps through the woods to the car park where I started.  My walk has covered twelve and a half miles.